Not About Food: A Real Character

I love writing and I do a lot of it. Only about half of it is about food- recipes, travel logs, restaurant reviews. I’ve been toying with the idea of occasionally sharing some of my non-food-related writing here at Keepin’ It Kind for awhile now. Today I decided to just jump in and do it. Enjoy.

The first time I saw a friend post three random pictures of various fictional characters on Facebook, I was stumped. I thought “Well, that’s random.” Then I saw another friend do it on Instagram and use the appropriate hashtag. I clicked on the hashtag and I became instantly obsessed. More friends posted their collection of 3 characters on Facebook. This little “game,” if you will, played into several of the things my brain loves obsessing about: pop culture, photo collages, and self-reflection. I thought to myself “Oh goody! I’ll play!”

Before I go further, I should explain that the last month or so, I’ve been dealing with some health issues that have left me extremely fatigued. It turns out that my thyroid medication dose, post-surgery, was too high, causing me, for lack of a better way to explain it, so wound up that I wore myself out. Also according to my now ex-doctor (that’s another story for another day), it amped up my metabolism so much that my appetite increased and that’s why I’ve gained 5 pounds in less than a month. When I discovered this game, my body was just beginning to adapt to the new dosage, which has gradually made me, each day, slightly less tired and slightly more of an anxious mess. Basically, I’m blaming the medication, my hormonal imbalances, and the resulting influx of anxiety for my following actions.

The day I discovered the game was a day that I was still pretty tired, but I was becoming a little more alert. Having discovered the game in the morning, just after breakfast, I decided to spend some time looking through other people’s choices while simultaneously researching and looking up possible choices to see if they “fit.” My first choice, Abbi Abrams from Broad City, was an easy one. We both collect Bed, Bath, & Beyond coupons, we both like to just watch our shows, we both have to remind ourselves that we’re adults, and we’re both a little bit awkward in social situations. Other choices ran the gamut from Angela Chase to Natalie Green to George Michael Bluth. After several more hours of intense soul-searching, I settled on Liz Lemon because she says things that I think in my head but never say. The third one, though, that one stumped me.

When my husband came home from work and asked me how my day was, I began to explain the game and how stumped I was. His response was “This is silly.” While we worked on binge watching Masters of Sex, I couldn’t help but wonder: Am I a Libby, a Virginia, or a Betty? It kept me awake for at least an extra 30 minutes that night.

The next day, even more of my fatigue was replaced with anxiety. Right after breakfast, I began to research even further for my third fictional character. As I closed in on midday, I still hadn’t thought of anything. I wanted it to be creative, yet expressive of my gentle, sort-of free-spirited side. And if I’m being honest, I also wanted to make people laugh. I seem to have blocked from my memory how I got to my final conclusion. I think I was focusing on how much I loved this character as a child and I seemed to remember him being as sleepy as I was feeling. So I put together this little collage and posted it on Facebook for all of my friends, family, co-workers, and ex-boyfriends to see. 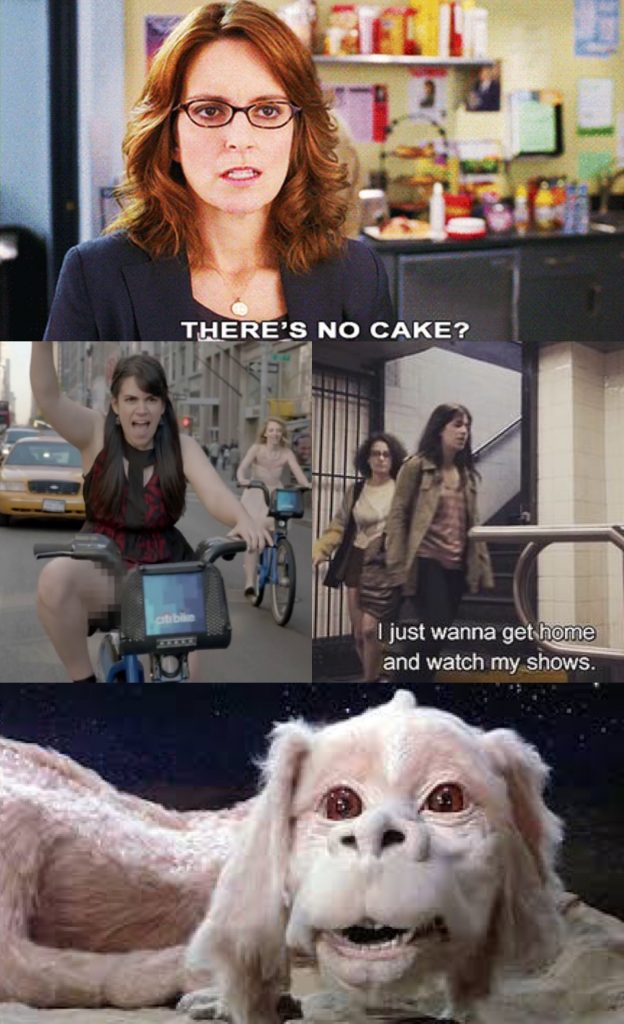 I waited for the “likes” to come pouring in. I got a few but not really the response I was hoping for. After an hour, I realized I still wasn’t satisfied with my choice. Something just felt “off.” This was right about when my heart began pounding and didn’t stop for the rest of the day. I decided to watch a video of Falkor to see if he matched my memory of him. As soon as he said “I like children,” my gag reflex was triggered. I turned the video off. That wasn’t me! Dear Lord! What had I done? This question ran through my head for the next few hours as I tried to come up with a replacement, my heart racing the entire time, as if my life depended on this one stupid collage. What had my friends thought of me when they saw that creepy monster? Did I look like as much of a moron as I felt?

Chris came home that night to find me frantically making dinner. He asked what was wrong and I told him. “Well, I finished that little game and I posted it on Facebook and then serious remorse settled in later as I realized that I had no business describing myself as any way similar to FUCKING FALKOR! I’ve been trying to figure out who to replace him, but I can’t think of ONE. SINGLE. CHARACTER! I mean, who am I? Am I Michele from Romy and Michele’s High School Reunion? Am I Lucille Bluth? Am I Kristen Wiig’s character in The Californians? I mean, MY HEART IS BEATING SO HARD!” Chris’s response was “Maybe Reese Witherspoon?” I went back to chopping my carrots, muttering under my breath “She is not a fictional character,” and realizing that he would never, ever understand. That night, my poor little heart tried to burst through my chest for two hours as I tried to fall asleep.

The next three days went pretty much like that one, but with different characters. Punky Brewster, because she has a dog for a sidekick? Inspector Gadget’s niece, Penny, for the same reason? Dorothy from The Golden Girls? Peggy from Mad Men? Cher Horowitz? Those and many more failed because they were either not smart enough, too smart, too talkative, too sweet, too mean, not emotionally strong enough, too cynical, too conservative, too classy, not classy enough, too “together,” not “flawed enough,” doesn’t drink enough wine, etc. Why can’t I categorize myself as a Monica, Rachel, or Phoebe? Or a Carrie, Samantha, Charlotte, or Miranda? Or a Norm or Cliff? Answer: Because I’m a little bit of all of them. I took online quizzes that suggest what fictional character you are based on your favorite color and preferred type of hat. When the final one suggested I was Robin Hood’s friend, Little John, I realized that the quizzes weren’t getting me anywhere. Chris went from suggesting other characters (“Why not a Meg Ryan character? Any of them is better than FALKOR!”) to tightening his lips whenever I brought the subject up. By day five, the topic was completely off the table.

My brain had turned this ridiculous game into some kind of bizarre homework assignment and the longer it took to fix, the more positive I was that I was a complete failure at life. I also became more and more aware that there are no emotionally strong, independent, kind, quiet, sometimes witty, flawed, characters that love sleeping, drinking wine, and dogs. I know there are a lot of unique, multifaceted characters out there but it was killing me that I couldn’t find one that was, you know, just like me. A travel-loving homebody whose hobbies include baking cookies and reading books and whose flaws include perfectionism, laziness, procrastination, and serious obsessive behaviors. Why are there no characters that fit that mold? So on top of being overwrought about this ludicrous endeavor that had hijacked my life, I was also having the most narcissistic week ever, or at least since being a teenager.

By day 6, my anxiety and fatigue leveled out enough for me to focus on getting my shit together. I made a to-do list for the day, and the first order of business was rectifying this stupid situation on my Facebook wall. I knew no one else cared (anyone who did had probably unfriended me by that point) as much as I did, but I needed to finish this in order to move on with my life. It took a lot of thinking back to movies I had seen in my life and googling things like “strong fictional woman drinking wine” and looking at what other people had done before I figured it out. 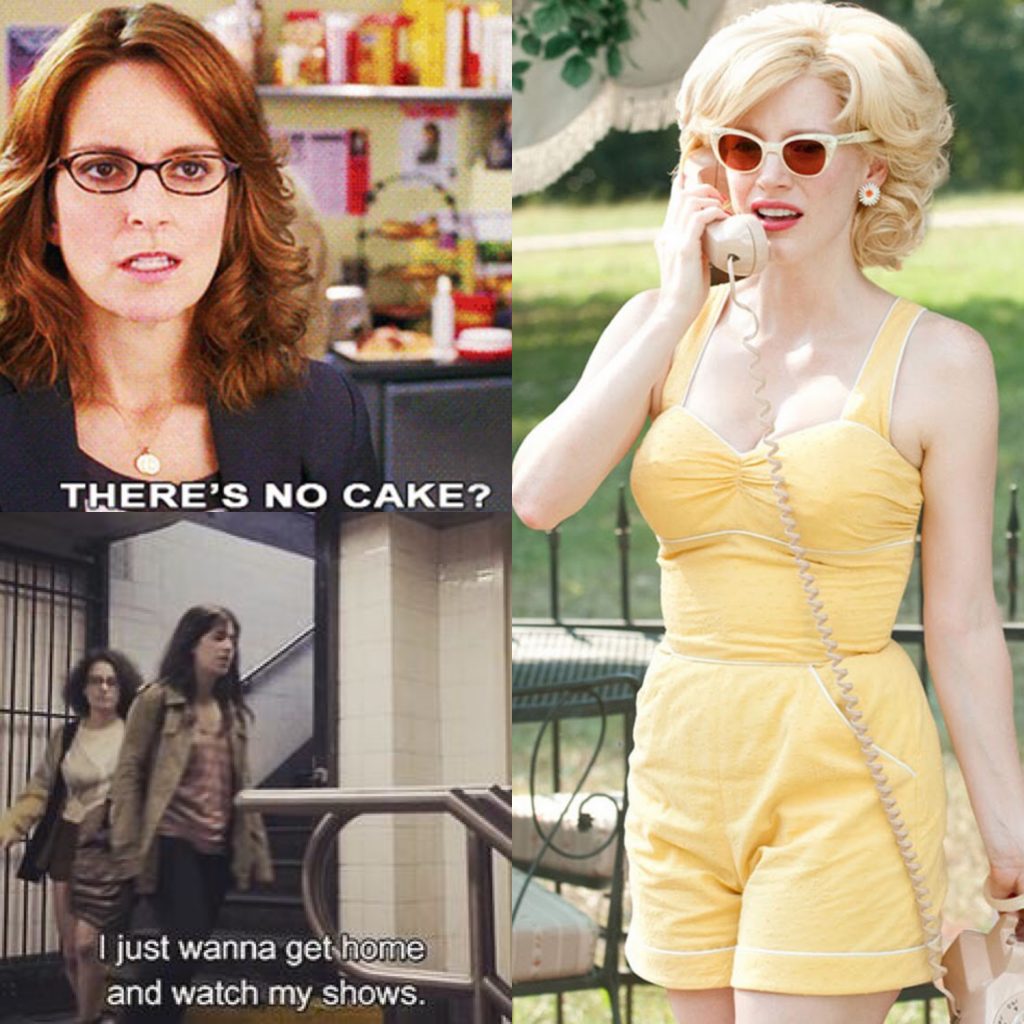 Celia Foote from The Help. Even though I had seen the movie, I needed to rewatch videos to confirm that this chick who showed up in an obscure google search was legit and also to prevent another #FalkorFiasco. Watching her, I felt that same feeling I do when watching Abbi and Liz. That feeling of “I’ve felt that way in similar situations” before, even though I’ve never had a slave and I don’t eat meat, but still. I somehow felt a kinship with the character. Am I exactly like her? No. But there are similarities. And plus, I really wish I had her wardrobe. More importantly, this trivial-ass thing that my brain had decided to obsess over for 6 whole damn days, was finally done. I could move on.

Instead of publishing an entirely new post on Facebook, and deleting the earlier, completely inaccurate one, I chose to avoid any further judgement by editing my original post and replacing the picture. This was more for me than anyone else. And besides, if someone wanted to look back at my wall, perhaps to confirm that “Yes indeed, Kristy really did compare herself to Falkor,” they would see a completely different picture and they would have to question their own memory. Obviously, I’m assuming these same people won’t be reading this post. Going forward, there is a temporary ban on me playing any new social media games, at least until my hormones balance out.

8 Responses to "Not About Food: A Real Character"