Not About Food: Shout

It was just after 2 am on a fall evening in downtown San Jose. A dear girlfriend of mine, my ex-boyfriend, a another (male) friend, and I were walking home from a club. We were in our early 20’s and drunk in the way that only those who have finally earned the right to start drinking in public places and want to celebrate can be.

I laughed and our male friend gently tried to shush her so we didn’t get the cops called on us. I remember thinking “I love her, but she’s kind of extreme. But that’s just her way. I mean, I could never be vegan. That’s crazy. And I’m a feminist too but I don’t need to shout about it or anything.”

We made our way back to my house but not before she and I took a quick “nap” to “rest our legs” on the steps of a funeral home. Yeah, I know what you’re thinking: I was a real gem back then.

Fifteen years later, my friend’s loud, drunk proclamations still dance around my mind. Since then, my friend stopped being vegan and I became one. She stopped drinking and I’ve become a feminist who needs to shout about it.

I need to shout about feminism.

I need to shout about feminism. I need to shout about it so much that while I write this, my hands are shaking and I have a lump in my throat. I’m thinking about the time I looked out my bedroom window and saw my male next door neighbor watching me take my shirt off. I’m thinking of the time I was just trying to unlock the door to my apartment building when a man stuck his hand up my skirt and grabbed my ass and part of my vagina so hard that I screamed out of fear and pain and he just kept on walking, disappearing into the crowd. I’m thinking of the time a man standing behind me on the bus ran his fingers through my hair. I’m thinking of the time the guy passing me on the sidewalk pulled his sweatpants down to expose his penis and then pulled his pants back up as if nothing had happened and I just laughed. Because by this time, it wasn’t shocking anymore. All I could do was laugh. I’m thinking about that time I went on a date with a guy and he leaned into kiss me and I pulled away because I barely knew him, and then he told me I should leave because I’d made things awkward, and as I walked to my car, I wondered if I’d ever been more than an object to him. I’m thinking of the time I’ve had men over-explain everything to me, right down to how dark it gets at night. He actually explained darkness to me. I’m thinking about the times men have interrupted me at work to explain their idea, which coincidentally, was my idea that I had just been explaining. I’m thinking about the times at work when a man will come in to the room and acknowledge every person in the room except for me and it’s not a coincidence that I’m the only woman in the room.

I need to shout about feminism because it’s not easy for me to do. I’m naturally inclined to avoid confrontation and try to please everyone. I hate to make others feel uncomfortable, even when I feel uncomfortable. The other day, I got into a discussion about the election with a co-worker. I know, I know. It’s a big no-no. I hate being political and I hate that this election has made it such a focal point in my life right now. I am grateful that we live in a democracy and that we all have the right to vote in accordance with our own ideologies. But when my co-worker mentioned that they were voting for a 3rd party candidate, I wanted to remind him of all the rights that many people will lose (not to mention the homes lost for all those who will be deported) should the republican candidate become president. I wanted to ask him if he cared about his young daughter’s future under this candidate’s leadership and how his views and treatment of women will contribute to the shaping of the woman she becomes. He left it at “I just need to vote my conscience.” And I get it. I do. I appreciate that he has that right. But it was a slap in the face, saying that risking my rights as a woman weren’t as important as not voting for someone he believes (without substantiated evidence) to be evil and corrupt. That having a president who treats women in such a horrifying, disgusting manner is not as big a problem as a president who once made a poor decision in the handling of her emails. I know I shouldn’t have, but I took it personally. But instead of shouting about feminism, I sat at my desk, put my headphones on, and watched old episodes of Full Frontal with Samantha Bee (a.k.a. Feminist Church) for a couple hours because I needed to hear a voice of reason. But the incident still bothers me. I hate that I was too worried about making HIM feel uncomfortable while voicing my opinion. I hate that I didn’t have the nerve to tell him how important it is that we have a president that feels that women deserve to be treated with respect. To have leaders that will shout about feminism so that someday, future generations of women won’t have to shout about it themselves.

I need to shout about feminism. I’m angry. I’m scared. I’m proud. And I’m not drunk. I’m incredibly sober. I’m standing on my chair and I’m shouting. I AM A FEMINIST! I AM SOOO FEMINIST! 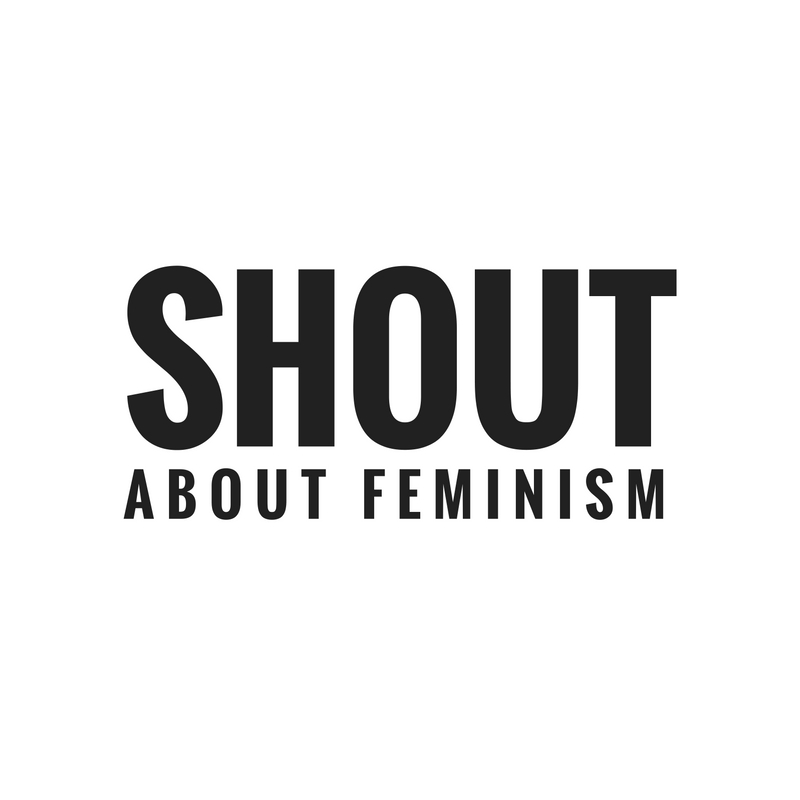 24 Responses to "Not About Food: Shout"