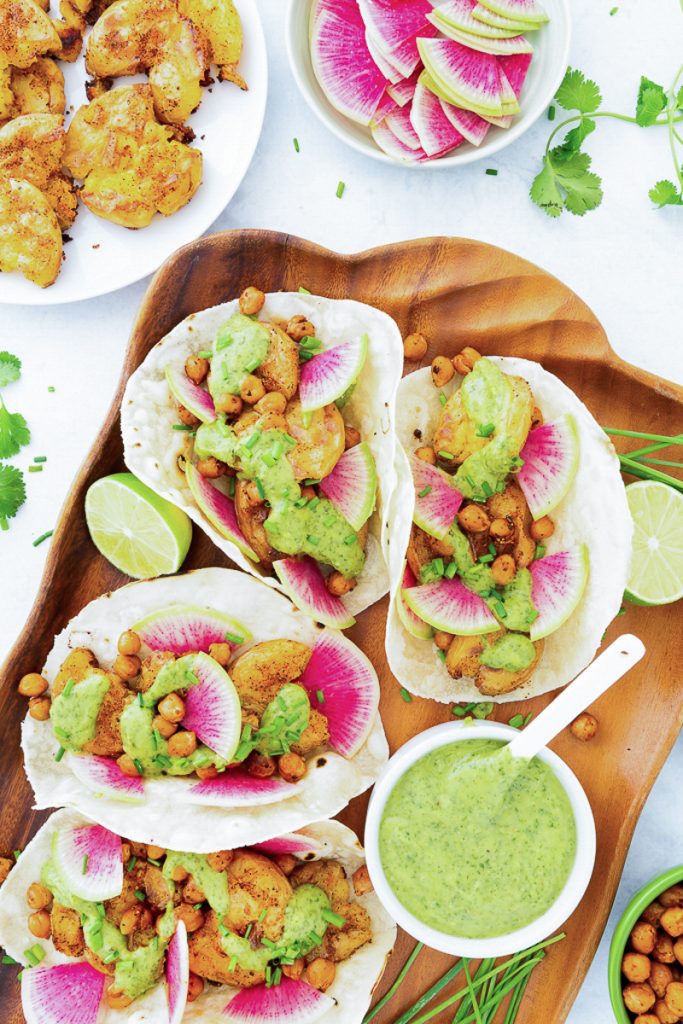 It seems like every vegan blogger and instagrammer in the known universe (and their collective mothers) has been making and sharing pics of beautifully smashed potatoes. They’re all on baking sheets with seasonings galore and usually some sort of sauce to drizzle on them. And they all make me salivate instantaneously because I love potatoes more than… well, I don’t know what. They’re just my most favorite vegetable and I love them cooked all the different ways but smashed holds a particularly sweet spot in my heart. They’re so crispy with just the right amount of oil and super soft on the inside. Then one day, while looking at the 98th pic of smashed potatoes I’d seen that week, I was hit with a stroke of brilliance: Make smashed potato TACOS. 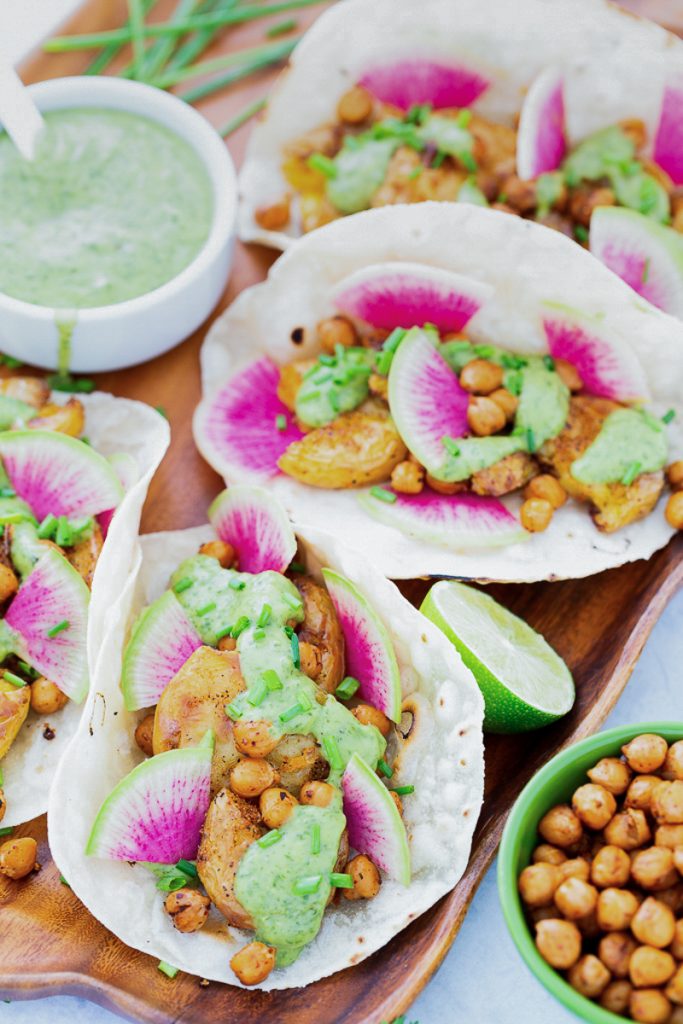 My thought process: Okay, okay, okay. Kristy. Focus. FOCUS. Here’s what you do: Cook up the glorious smashed potatoes with an ancho chile powder spice blend and put them in tacos with, I dunno, like, some chickpeas cooked with Tajín Clásico Seasoning (I’m majorly obsessed with Tajín right now, but if you don’t have access to it, you can use some chile powder, salt, and extra lime juice)? Oooh, ooh! And like a super limey, cilantro-y, avocado sauce? And WATERMELON RADISHES! (side note: I’m also going through a hardcore watermelon radish phase) And then you can top it off with some chives or some shit to be kinda fancy. Done. 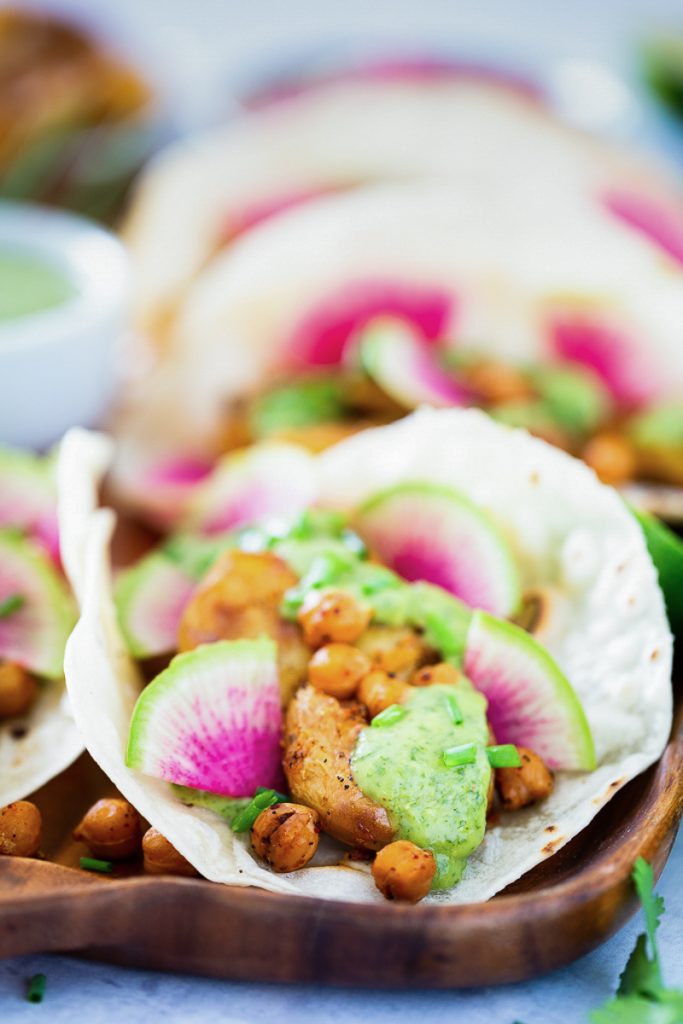 I was damn-near delirious as I walked through the grocery store grabbing ingredients. I haven’t been this excited about a recipe in a long while. Like, it’s the kind of recipe that you know is going to be incredible before you even test it. I mean… Smashed potatoes are great in their own right. And everybody loves tacos (and if they tell you they don’t, they’re lying). So smashed potatoes INSIDE of TACOS! I’m getting excited all over again. I need to regroup. 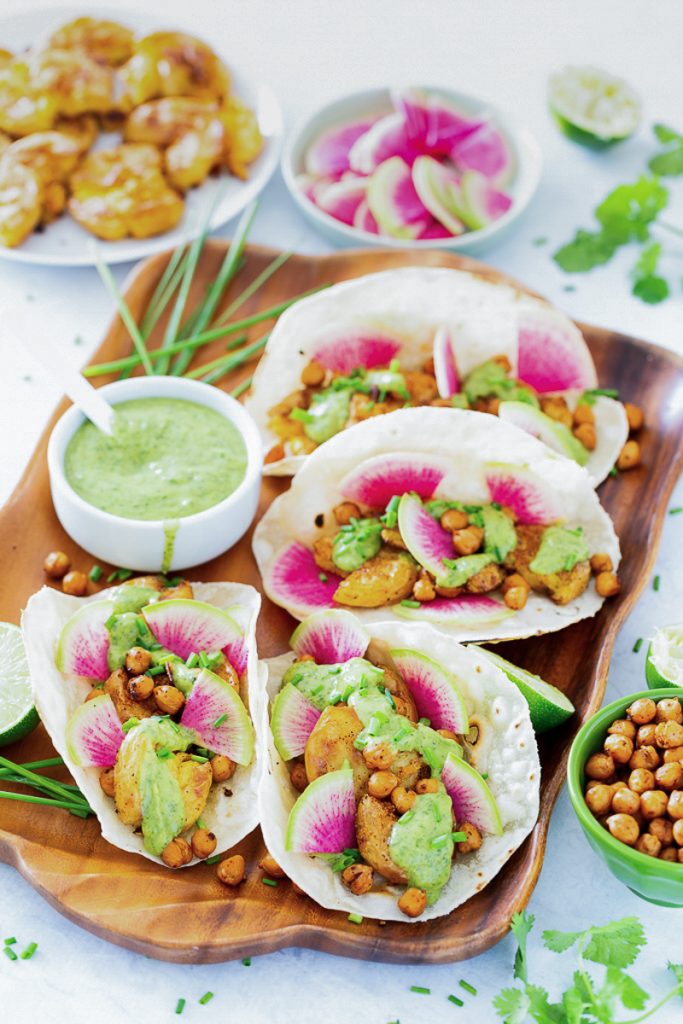 Ok. These smashed potato tacos come together pretty easily. The potatoes take the longest to prepare- parboiling them, then tossing them with oil and spices, smashing them, and then roasting them- Altogether take about an hour. But most of that hour is just waiting for them to come out of the oven, during which you can prepare the rest of the components, all of which are super simple to prepare. All the sauce ingredients go in a food processor or blender and blend until smooth. Easy peasy. The chickpeas take another maybe 10 minutes at the most. Slice up some watermelon radishes, chop the chives, and heat up the tortillas. By the time the buzzer goes for the potatoes, you’re ready to stuff those hot, crispy-on-the-outside, soft-on-the-inside spiced smashed potatoes in their tortillas and top with all the stuff. 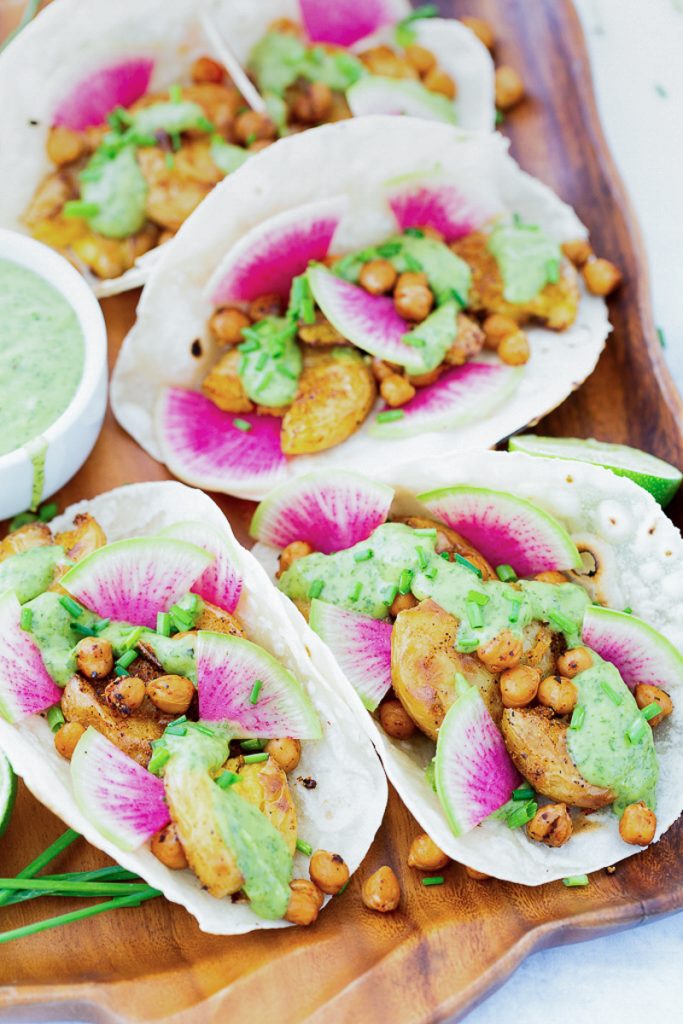 The first time I made these, I cooked up six tortillas, enough for both Chris and I to have 3 tacos each. Then we scarfed down our first three tacos each, interrupted only to mutter “these are ridiculous,” and “daaaaaaammmmnnnn,” several times. Then we looked at each other 7 minutes later, our plates empty except for a couple chickpea stragglers and a few smears of cilantro-avocado sauce, as if to say “well, what now?” After a moment of silence (and checking to see if there was more room in my stomach), I offered “There are more potatoes and chickpeas and sauce. And two more tortillas. So…” 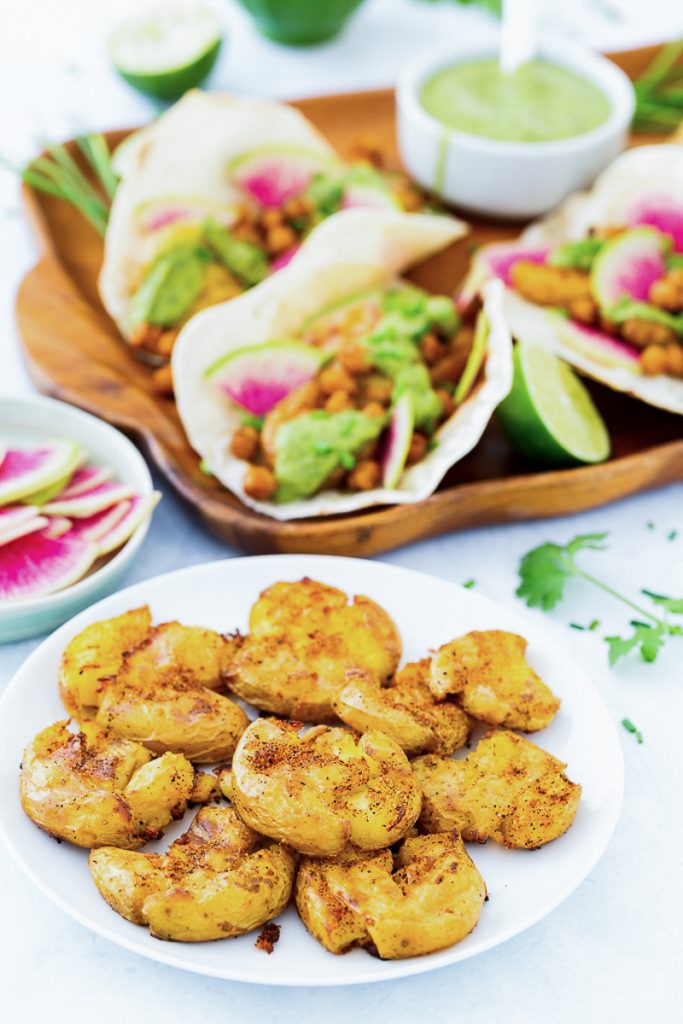 I don’t think I need to tell you what happened next. Let’s just say these smashed potato tacos were a hit. “One of your best recipes yet” and “best tacos I’ve ever had,” may’ve been muttered. I don’t want to brag. I just want you to try them. I think you’ll like them as much as we have and if you’re anything like me, they’ll go into your regular meal rotation too. 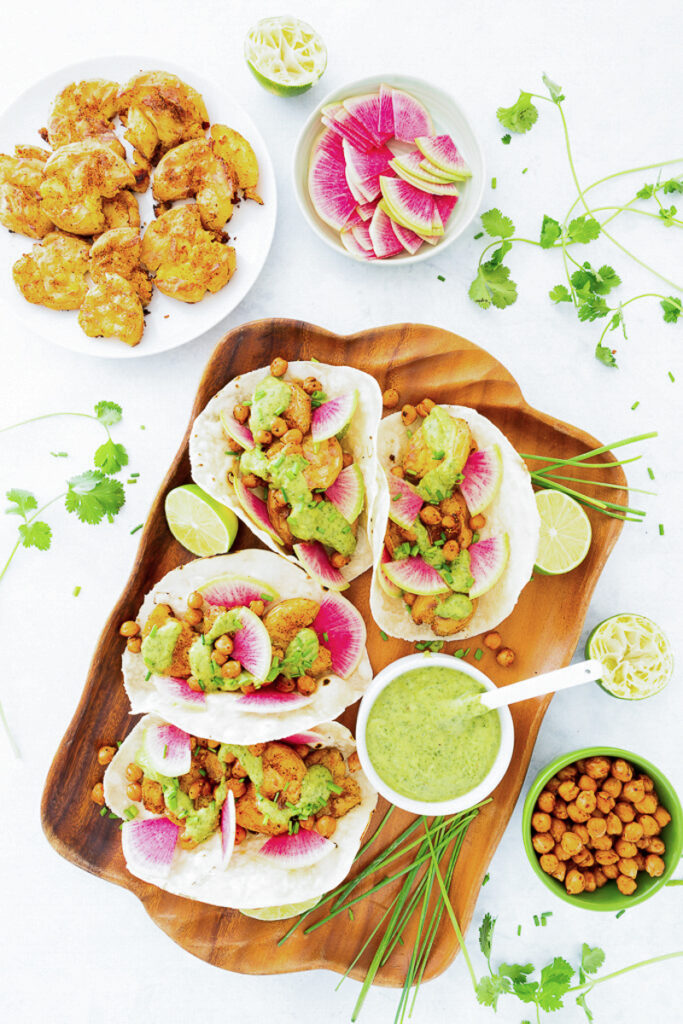 You don't want to desecrate the potatoes- just press them until they're a more flat version of their earlier selves. Their insides will squoosh out and that's good. You want that. Just know that the flatter you go, the crispier they'll be. And the less flat they are, the more like plain ol' roasted potatoes they are. You want to find a happy medium. I would say anywhere from 1/2 - 1 inch thick, depending on the original size of the potato. 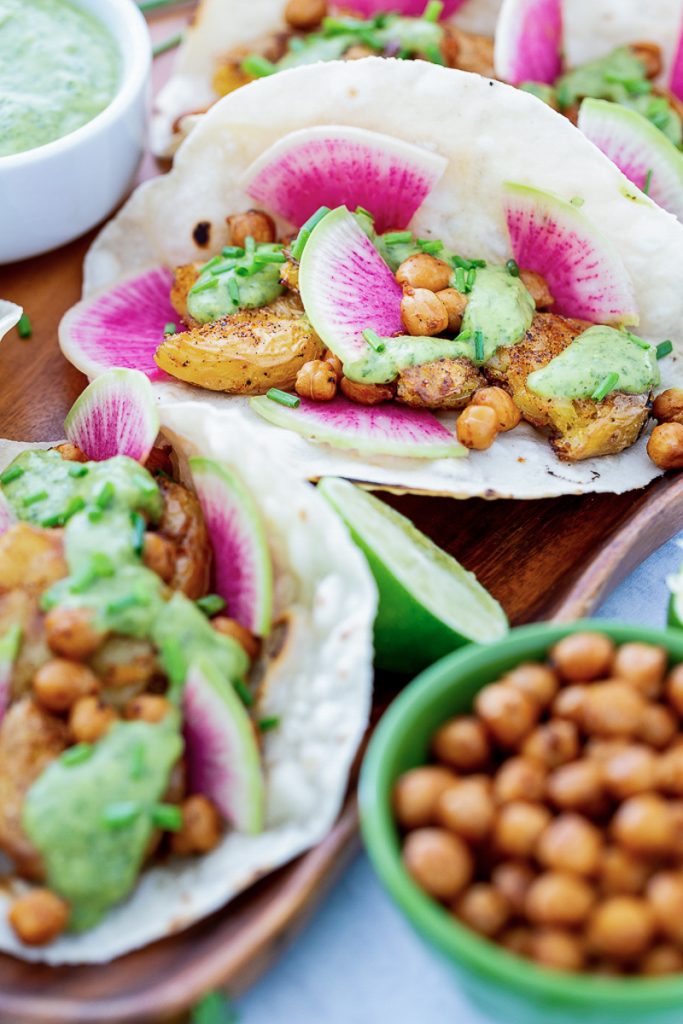 What foods are you obsessed with right now?