In the coming weeks, you will get your dose of individual vegan city guides for Italy and then some for Barcelona, Spain.  As an introduction to these city guides, however, I want to share my top ten tips for being vegan in Italy.

1.  RESEARCH, RESEARCH, RESEARCH!  We live in a time where multitudes of information is literally at our fingertips so take advantage of it.  Before we left, I made a cheatsheet of various vegan/vegetarian- friendly places in every city we were going, along with addresses and hours they were open (if possible).  Happy Cow is an amazing resource for this but so is typing "Vegan in (whatever city you are going to)" into Google. 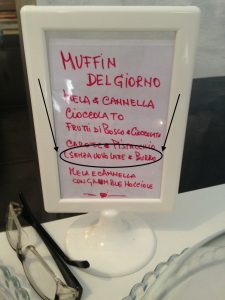 2.   LEARN THE LINGO.  If you travel to a larger city in Italy, such as Rome, Milan, or Florence, you will likely not have any problem communicating in English.  When I lived in Florence, I tried so hard to learn Italian (I even had a tutor), but everyone I encountered wanted to practice their English with me.  Before this trip, though I remembered a lot of the vocabulary, I still made a cheat-sheet of various Italian phrases to help me if I was in a pinch, but there was only one or two that I needed to use the whole time: "Senza Latte" (without milk), "Senza Formaggio/Mozzarella" (without cheese/mozzarella), and "Senza Uvo" (without egg).  Most of the time, however, I could just say "No cheese," or "Do you have any gelato with no milk?" and they knew what I was talking about.  Also, most restaurants you go to will have each item on the menu also written in English (or a separate English menu).  If you're going to a smaller town, or a town less travelled, you may not have as much luck.  Here are some terms you amy want to keep handy:

3.   DON'T EAT NEAR TOURIST ATTRACTIONS.  This is something that applies whether you are vegan or not.  Back when I was traveling through Europe on my own on a very, very tight budget, I learned to never look for restaurants near tourist attractions.  Unless it is your lifelong dream to eat dinner overlooking the Trevi Fountain, just walk a few streets away and you'll likely uncover something much quieter, less expensive with higher quality and better service.  Some of the best restaurants we ate at were just a few blocks off the beaten path.  I also try to never eat at restaurants that have servers standing outside trying to get you to look at their menu.  It's annoying and frankly, if the food is good, they shouldn't need anyone outside trying to lure customers in.  Another thing I try to stay away from (and this is probably less important) is menus with pictures of every item.  It's usually a good sign of a tourist trap (though, not always) and the food never looks the same when it's actually served to you.

Away From The Crowds

4.   WHEN LOOKING AT MENUS, always check the Appetizer and "Contorni" (or side dish) sections.  Usually under appetizers you'll find lovely things like bruschetta, marinated olives, and antipasti.  The side dish menu is usually mostly full of vegetables: marinated mushrooms, grilled vegetables, and if you're really lucky, fried squash blossoms! 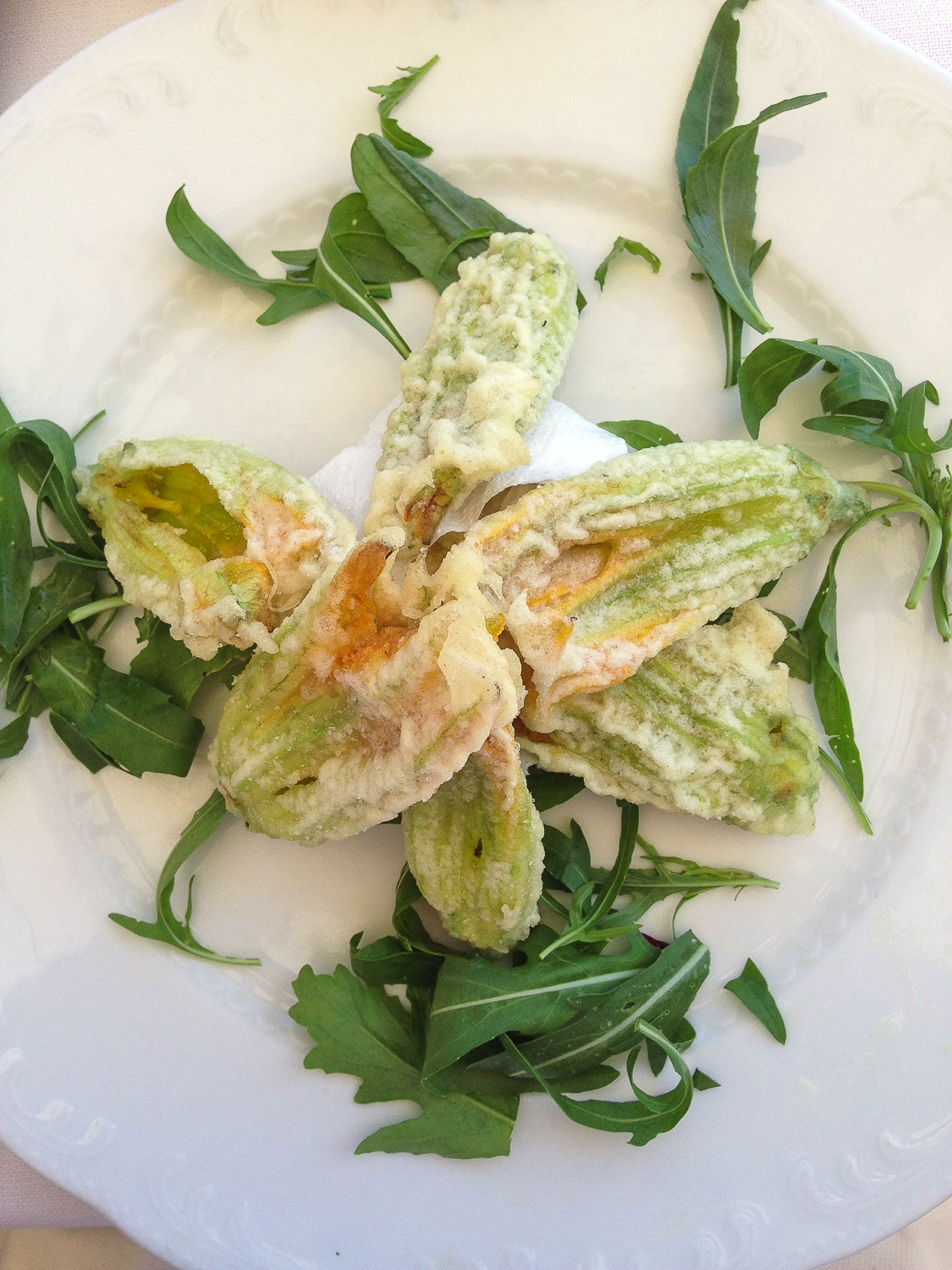 5.   PASTA! On every menu, you will find pasta under "Primi Piatti," or "first course."  You can usually always find pasta with tomato sauce or pasta with vegetables or olives and capers.  You just need to clarify that you want dried ("secca") pasta and not fresh ("frescha") because fresh pasta is made with eggs. 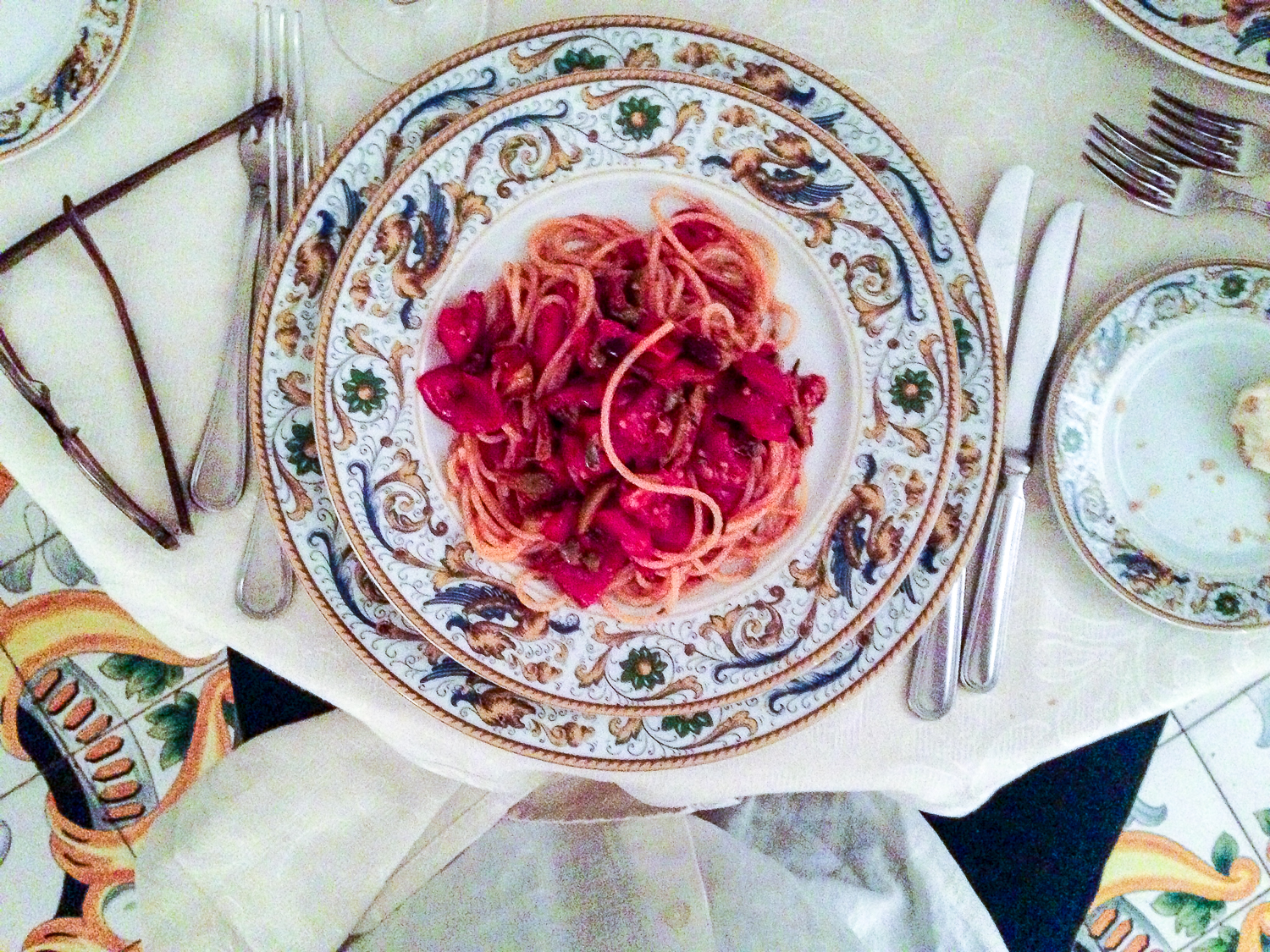 6.   COPERTO.  Coperto basically means "cover charge" and many restaurants will add a coperto for each person on to your bill.  It's usually around 1 -1.50€ per person, but I've seen it as high as 3€.  It's just something to keep in mind when studying menus and deciding where to eat.  Also, keep in mind that once you have been served your food, your waiter will not bring you your bill until you ask for it.  This is true through most of Europe as well, so don't think your server is ignoring you- they're just letting you enjoy your meal. 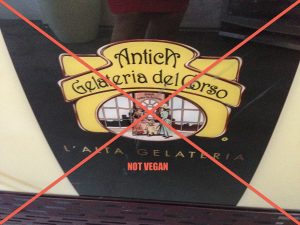 7.   VEGAN GELATO EXISTS!  You just have to know how to ask for it.  There was only one town we went to where we had difficulty finding vegan gelato, but we still found one flavor.  Stay away from chain or franchise gelato cases.  You'll find these in restaurants or shops rather than independent gelato shops.  They'll usually have a logo on the front and on each of the flavor cards.  A lot of times, these flavors all contain lactose and/or they were made in the same machine (without being cleaned between the dairy and non-dairy flavors).  Speaking from my pre-vegan experience, these gelati are usually not nearly as good anyway. Find an independent gelateria and ask if they have any gelato "with no milk/latte" or "senza latte."  They will likely have a selection of sorbets (and sometimes, if you're really lucky, they have a chocolate sorbet!!!) or if you're in a larger town, like Rome or Florence, you may be able to find soy gelato.  You can also ask if they have any "soia gelato," and they will know what you're talking about.  Italy has a high rate of lactose intolerance so gelateria workers are very accustomed to these questions.

8.   CHECK OUT FARMACIAS & MARKETS.  If you are staying in a place with a kitchen or are just looking for snacks in between meals, pharmacies (farmacias) and markets are great places to look.  Farmacias tend to carry at least one or two specialty vegan products (we even found stevia, seitan, tofu, and vegan croissants in one farmacia!) and always have several gluten-free products as well (though not all of the gluten-free products are vegan so be sure to check the labels).  Markets are always full of fresh produce and if you are looking for organic, look for the term "biologique" or "biologica" or ask if they have any "frutta/verdure biologica" and they will be able to help you.  Bread shops, usually with the word "Forno" in the title (forno is a brick oven, usually used to make pizza) will have various types of foccacia and schiacciata (firmer, saltier tuscan brother of focaccia) which are usually vegan (make sure they have not topped it/filled it with meat or cheese. The plain ones, or ones baked with olives, tomato, or herbs are fine).  These breads are delicious and great for a snack or as an accompaniment to a meal (Hint: Try to go in the morning when the breads are freshly baked and still warm from the oven!). 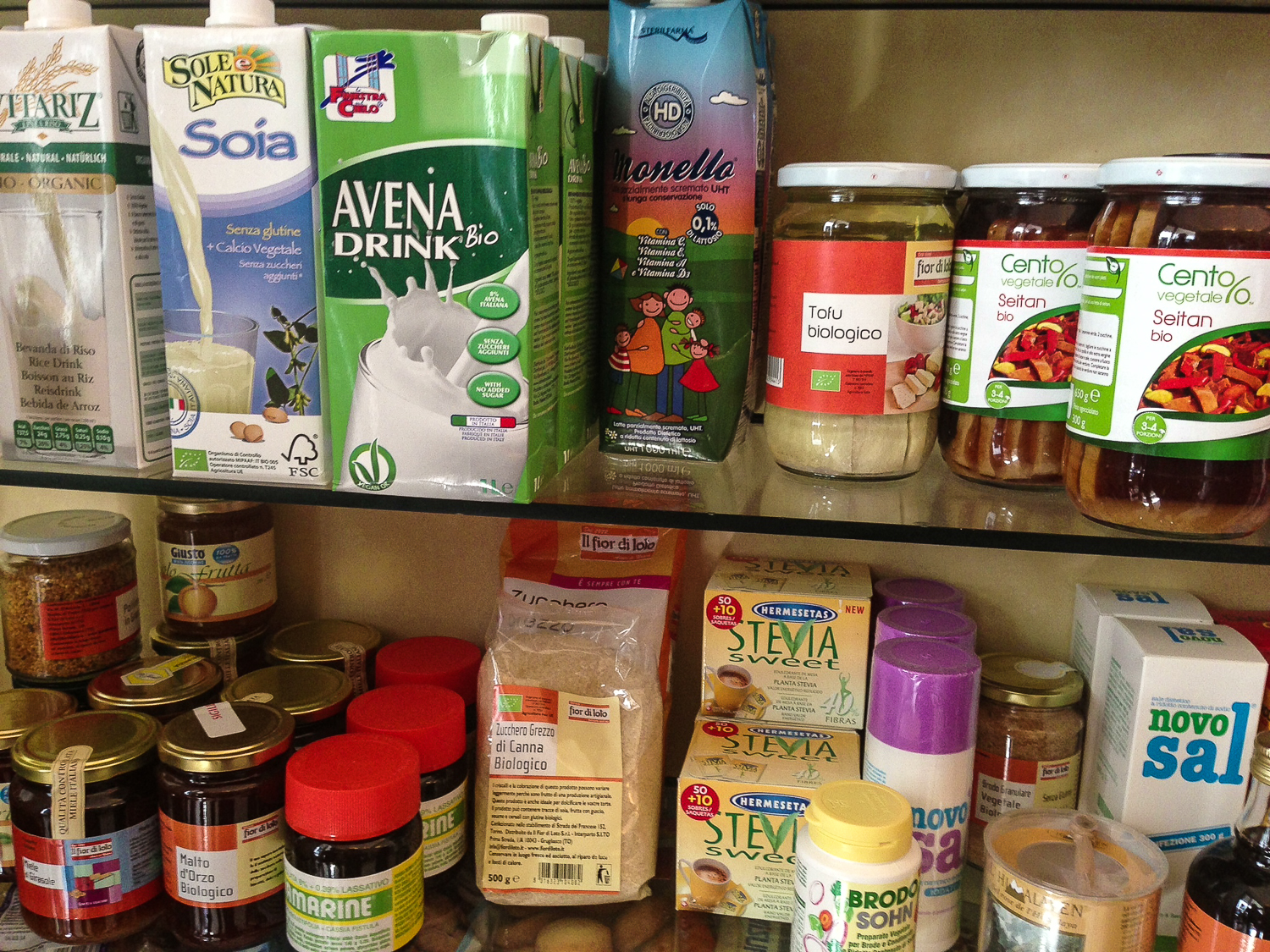 9.  BE PATIENT.  When you are making special requests, keep in mind that you are speaking to someone who may not fully understand what you are saying or are not used to someone making these requests.  It is best to not confuse them by explaining that you are vegan or vegetarian.  Just be patient and be very clear that you want the "pizza vegetariana senza mozzarella."  And smile- it goes a long way.  Also, be patient with yourself.  There may be times where a mistake occurs or that you accidentally eat something with dairy in it.  It happened once to us and as disgusted as I was when I found out, all I could do was make note of it and try to be more careful in the future.

10.   WHEN ALL ELSE FAILS, EAT PIZZA!  This is actually one of my basic rules of life, but it applies to being vegan in Italy too.  You can find pizza almost everywhere and asking for cheeseless pizza is not as uncommon as it is in the states.  They will raise an eyebrow if you ask for no prosciutto but they will understand.  You can usually find a vegetable pizza that you can get without cheese, but a couple of the best pizzas we had originally contained meat and cheese and we asked that they remove both, leaving a pizza with marinara, mushrooms, artichokes, and olives.  At the very, very least, most  places will have a pizza marinara which is exactly what it sounds like- pizza with marinara sauce.  Trust me- where there is pizza, a vegan cannot/will not go hungry. 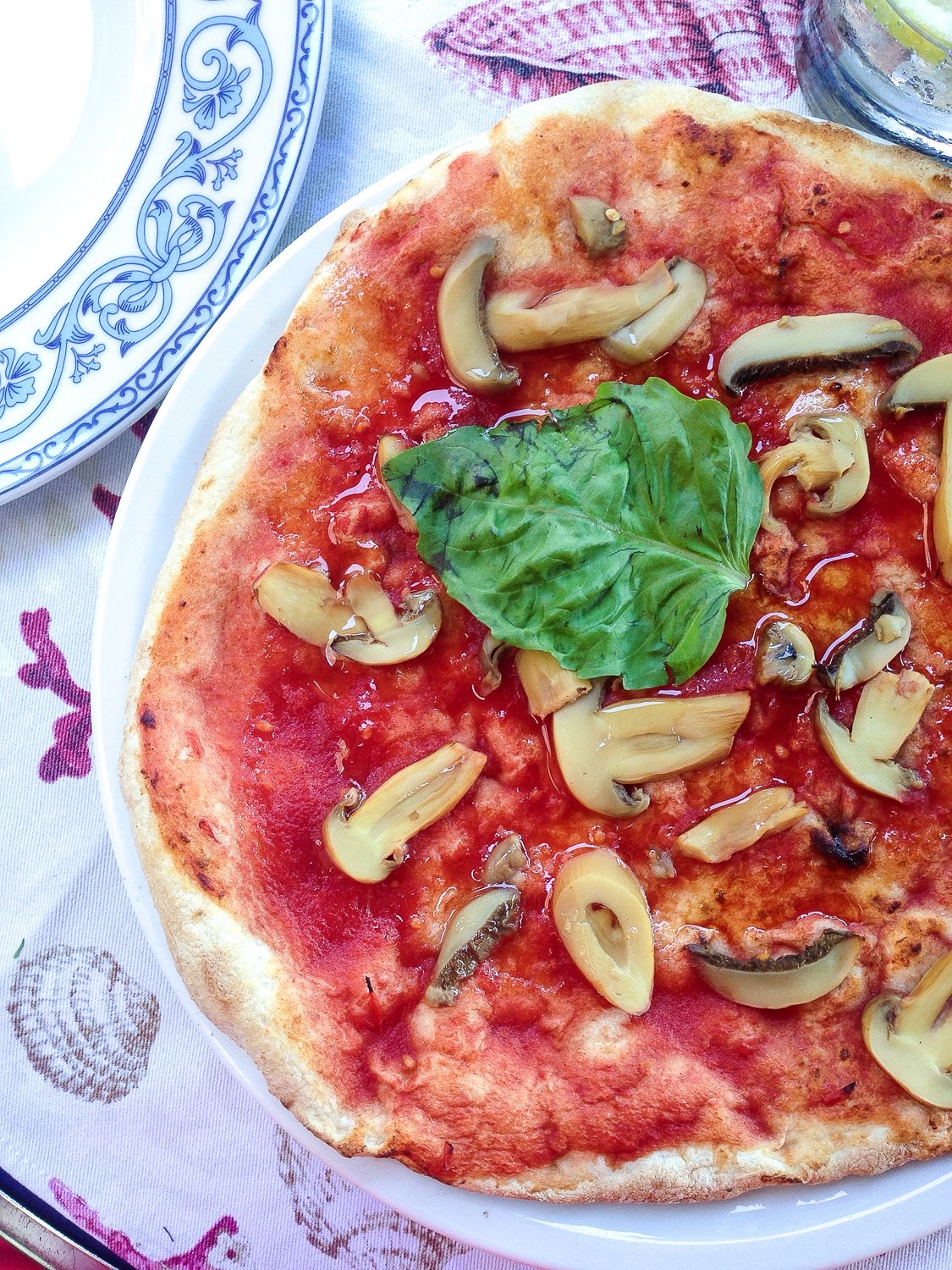 Stay tuned in the coming weeks for the vegan low-down on each city we went to!