Chris and I have been craving a get-away weekend for awhile now. Weekends tend to be the best time for us to shoot stuff for the blog since we’re now both working during the week so we’ve been working during the weekends a lot. I mean, by the time the weekend is over, we’re ready for a break. With the show we’re working on beginning to ramp up, we decided to run-away before things get really crazy. Since Santa Barbara is only 1 1/2 hours from LA with vegan options aplenty (and it was also where we spent the weekend after we got married, so we’re a little sentimental about it), it was the obvious choice.

We chose to stay at Hotel Indigo for several reasons: It was very close in proximity to a few restaurants with vegan options, it was within walking distance to the Urban Wine Trail (and we’d planned on doing a little wine tasting), and it was also dog-friendly. It was a little pricy but definitely one of the more affordable options for the dates we were going to be in Santa Barbara (It was even less expensive than many AirBnBs in the city). The room was quite small (but in a very cool, European way), but it had a patio where Sam could bask in the sun and was clean and modern and did I mention it was right next to the beach too?

We arrived in town late Friday night and crashed as soon as we checked in. Saturday morning, after sleeping in, we took Samantha and walked to breakfast. 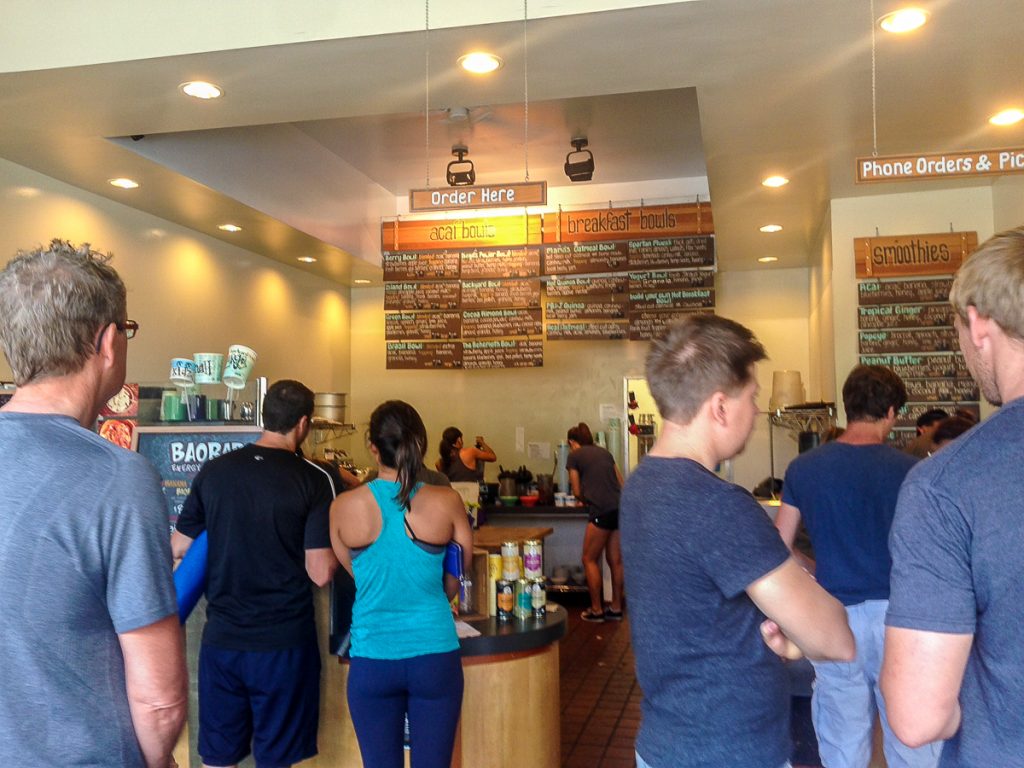 Anyone who follows me on Instagram knows that smoothie bowls and/or acai bowls are totally my jam. This place has great reviews on Yelp so we decided to check it out. We got there just as some people were leaving so we were able to snag a set outside. 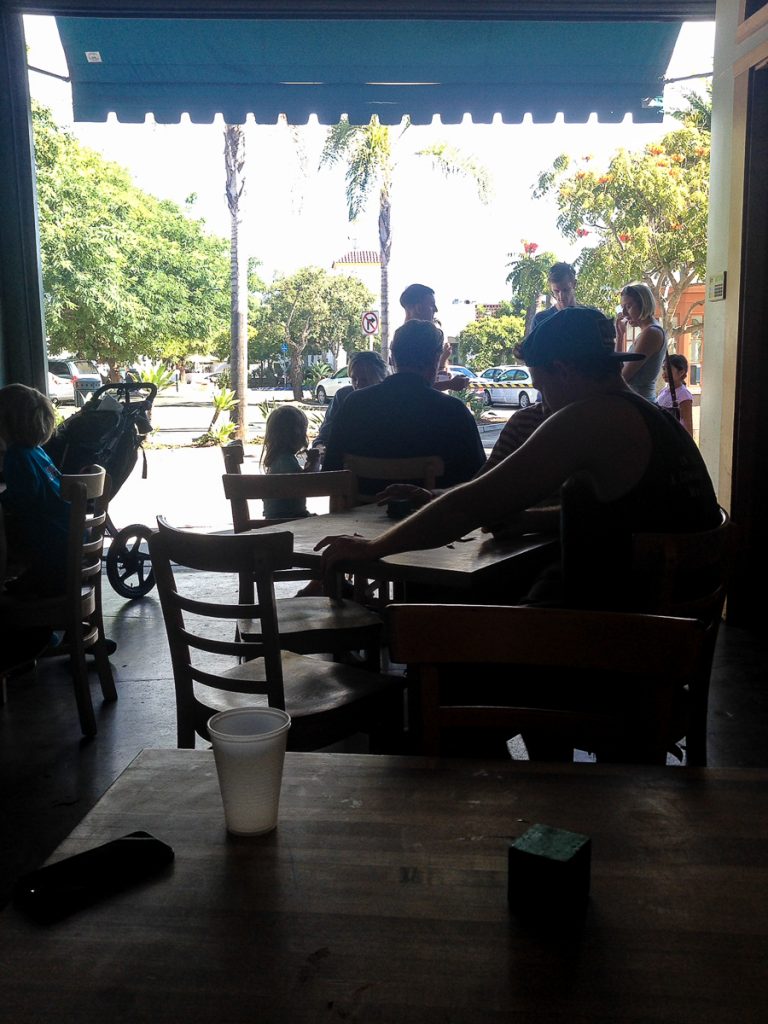 I was happy to find that the granola they use is honey-free so as long as we asked for no honey on top, we could have a vegan bowl. Chris and I each ordered the Berry Bowl, which consists of a smoothie made with acai, banana, strawberries and apple juice, topped with granola, bananas, berries, fresh berries, and goji berries (it also comes with honey if you don’t ask for it without). I asked to sub mango for the banana in mine and no banana on top (bananas are not always my friend so being on vacation, I decided not to risk it). 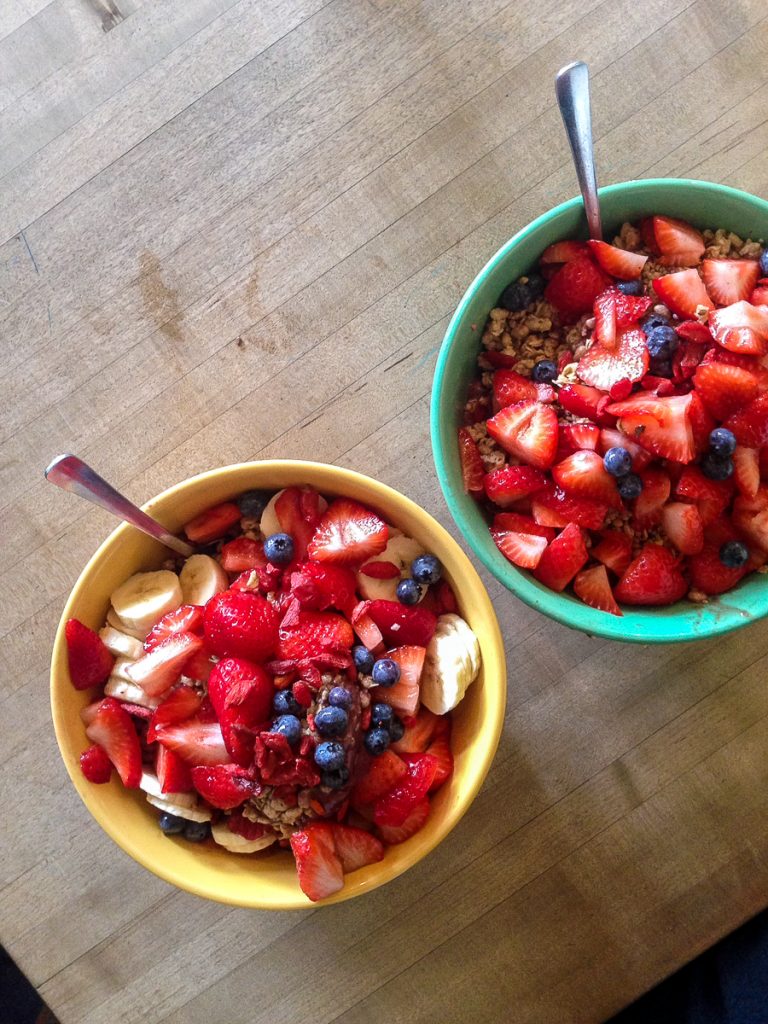 All in all, these acai bowls are pretty great. I generally don’t like Sambazon brand acai because it has added citric acid and sweetener which to me, dulls the acai flavor and makes it too sweet. These bowls were on the sweet side but not so much that I had a problem with it. We would’ve even gone back the next day but we were craving something heartier the following morning.

After breakfast, we decided to walk up State St. with Samantha. State St. is pretty much a mall but there are a lot of smaller, independently owned boutique type shops as well. We didn’t buy anything (though I did find a stapler at Anthropologie that I kind of fell in love with. Don’t judge. I have a ridiculous, inexplainable weakness for staplers.) After our walk, we could tell Sam was getting a little pooped so we took her back to the hotel (if anyone asks, we *did not* leave her alone in the room because that would be against hotel policy). While Sam definitely *did not* take a long-ass nap in the room, we ventured back out. 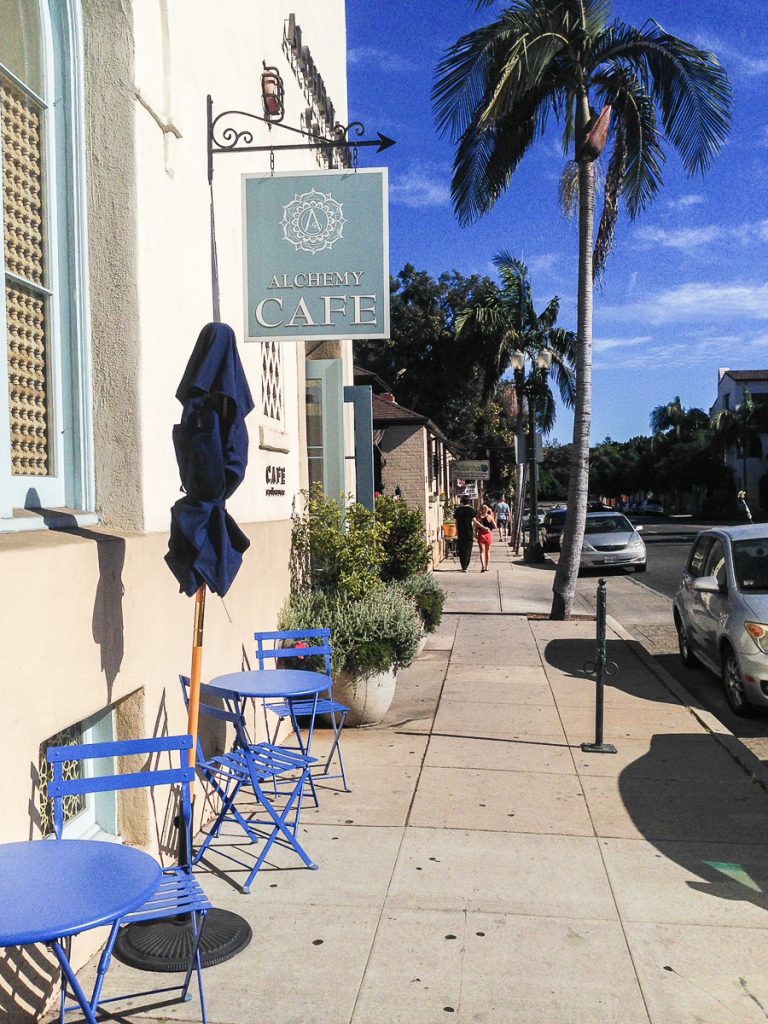 Our dilemma was this: We’d slept in and then spent so much time moseying around SB that all of a sudden it was 3pm and we were hungry. It was too late for lunch and too early for dinner. Throw in the fact that we’d planned on going wine tasting and the wine tasting room we were planning on visiting closed at 6pm, and we were in a bit of a pickle. Do we go get a full-fledged dinner and just snack later or do we get something light and get a big dinner later? We opted for the latter. We chose to go to Alchemy Arts Cafe because the menu seemed light and healthy. 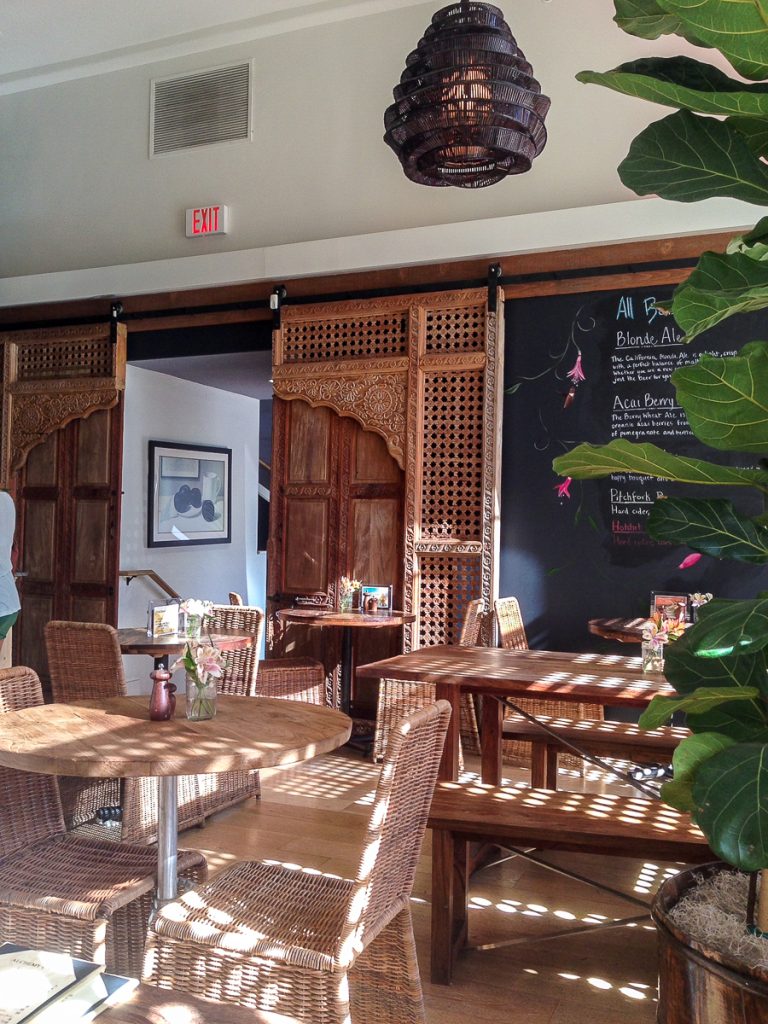 Alchemy Arts Cafe is vegetarian with many vegan options. The cafe itself is actually part of a day spa so it has a very beautiful, peaceful, zen atmosphere. We chose a seat by the window. 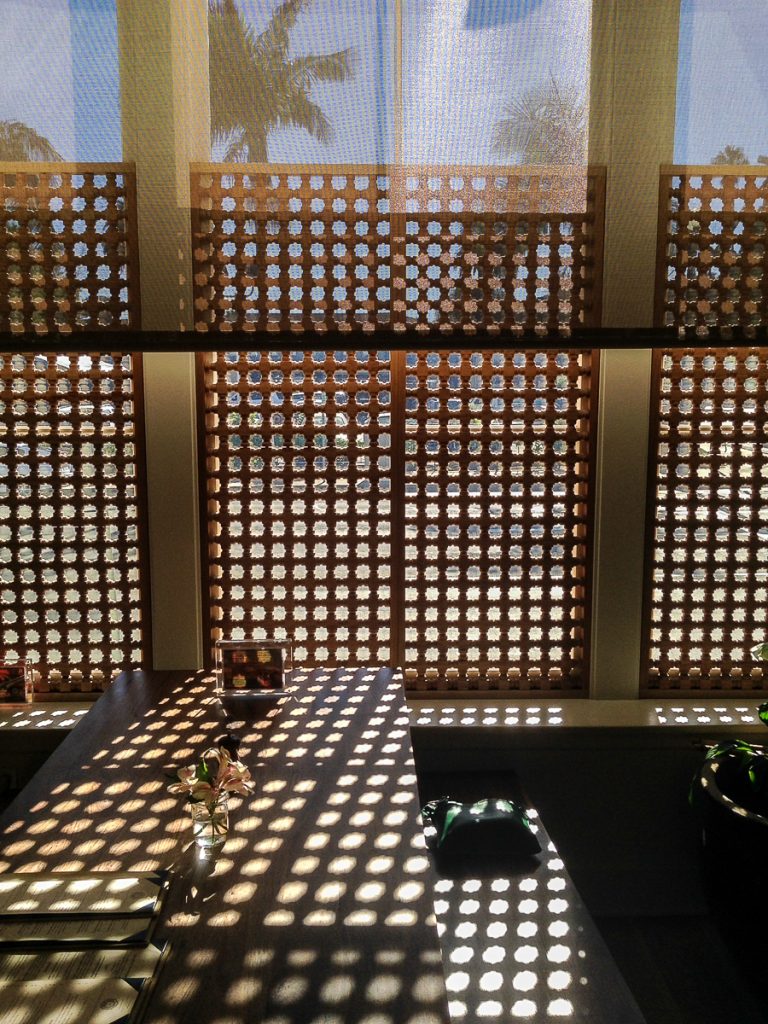 Seeing as how it was off-hours for lunch, there was only one person on-staff at the time, so it was totally understandable why service was a bit slow. Other than the fact that we were hungry, it didn’t really bother us. We got two dishes to share. The first dish was the Ayurvedic Spice Burgers. The dish consisted of 2 sweet potato quinoa patties atop a salad of greens, fennel, oranges, and cashews with a cashew tangerine dressing. I loved the balance of flavors in this dish. 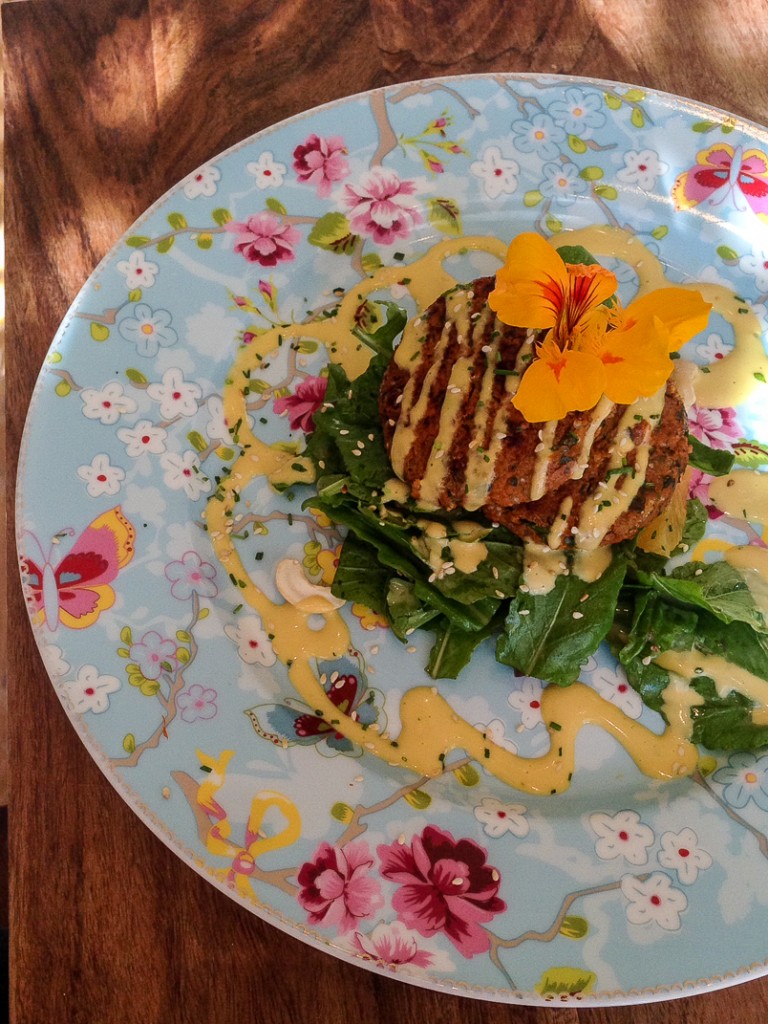 The second dish we ordered was the Alchemy Roll. This came with 4 rice paper rolls, stuffed with carrots, avocado, sunflower sprouts, herbs, and cashews with a thai dressing. This dish, just like the first, was very refreshing. 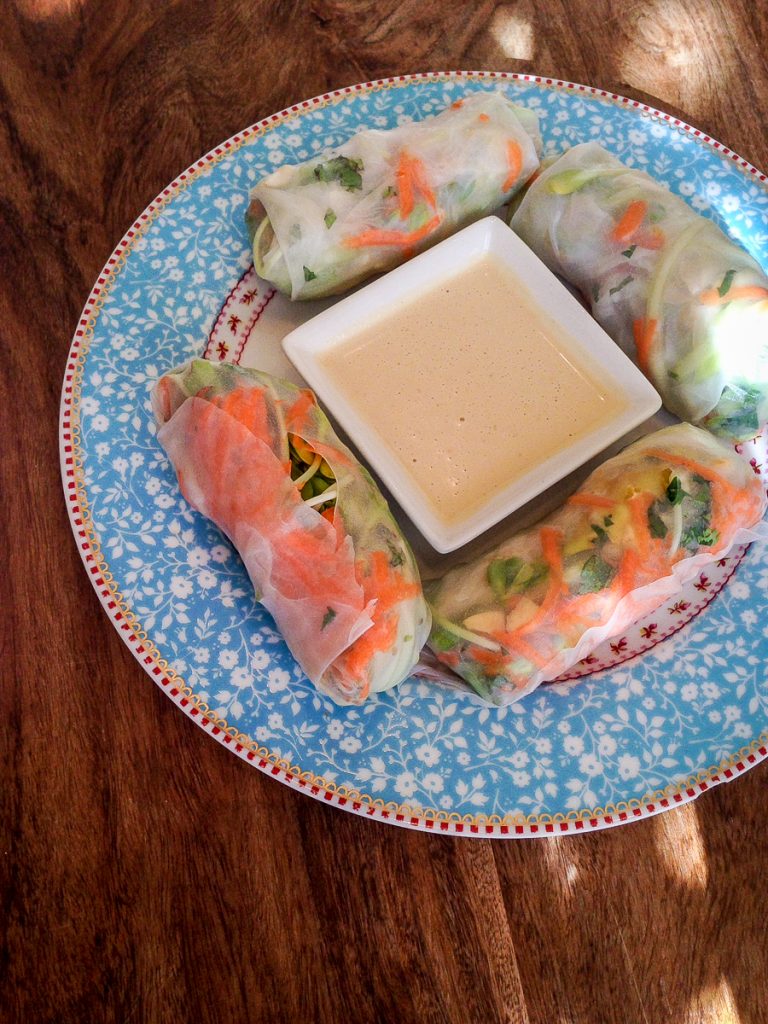 We left feeling satisfied but not stuffed- perfect for an afternoon of wine tasting followed by a feast. 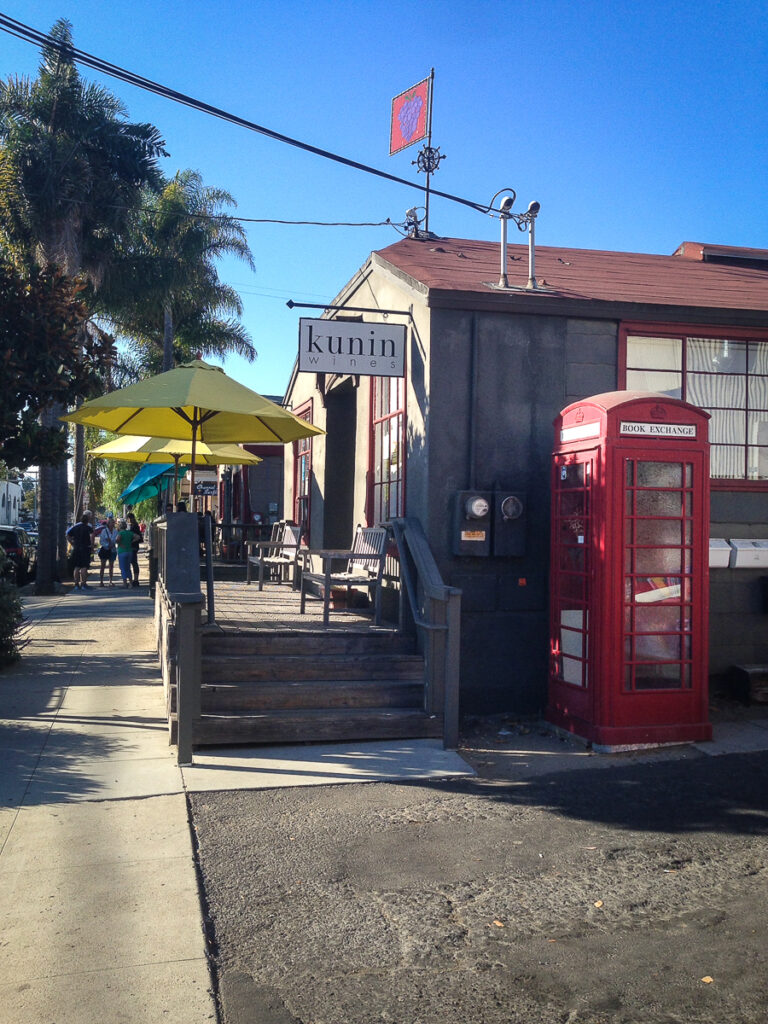 In what seems like another lifetime ago, I used to really love to go wine tasting in Napa and Sonoma or just to various wine tasting bars in San Jose. I loved tasting and comparing the different wines but mostly how fancy and grown-up it made me feel. Chris had never been wine tasting so it seemed like something that would be fun for us to do together. Before going to Santa Barbara, I researched every winery on the Urban Wine Trail (a trail of wine tasting rooms in Santa Barbara) to see which one, if any, had vegan options. Many of the wineries, I couldn’t find any information on, and several proved to be vegan-unfriendly. Kunin Wines was one of the 2 I found to be 100% vegan (As a side note, Municipal Wines has vegan red wines, but its whites are not vegan-friendly). 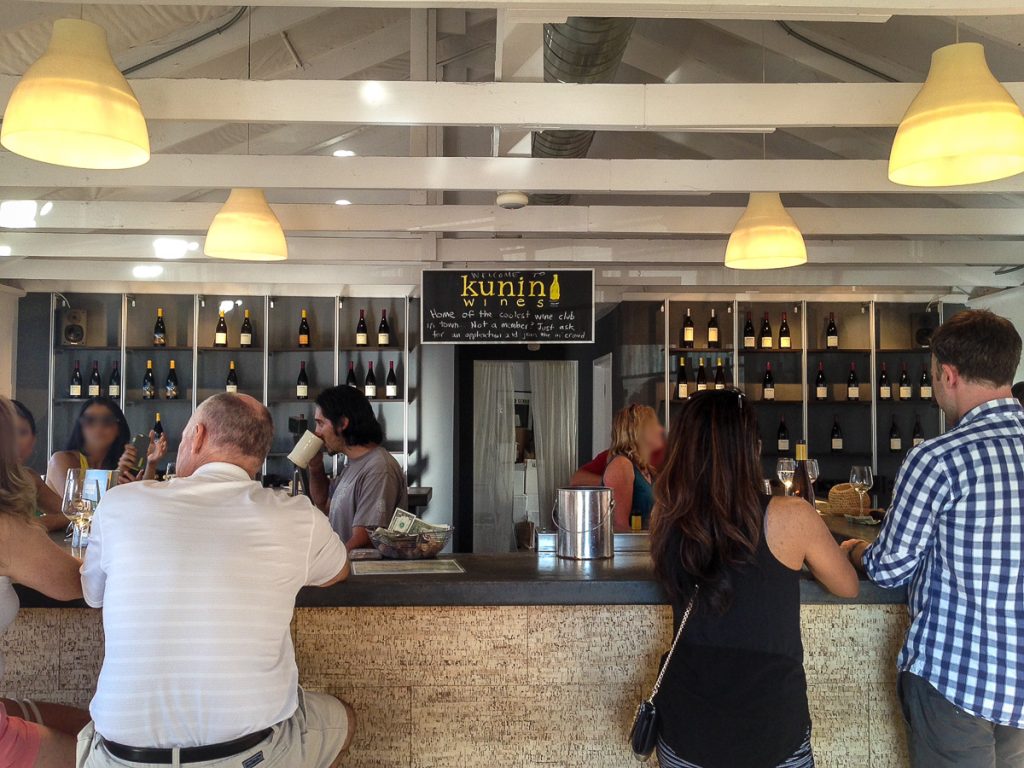 Chris and I did the classic tasting, which allows you to taste 5 of their wines for $10. All of the wines we tasted were fantastic. We particularly liked the sauvignon blanc so we stuck around to have a glass after our tasting. It should also be mentioned that they were not closing at 6pm so we had time to relax and just have fun together. 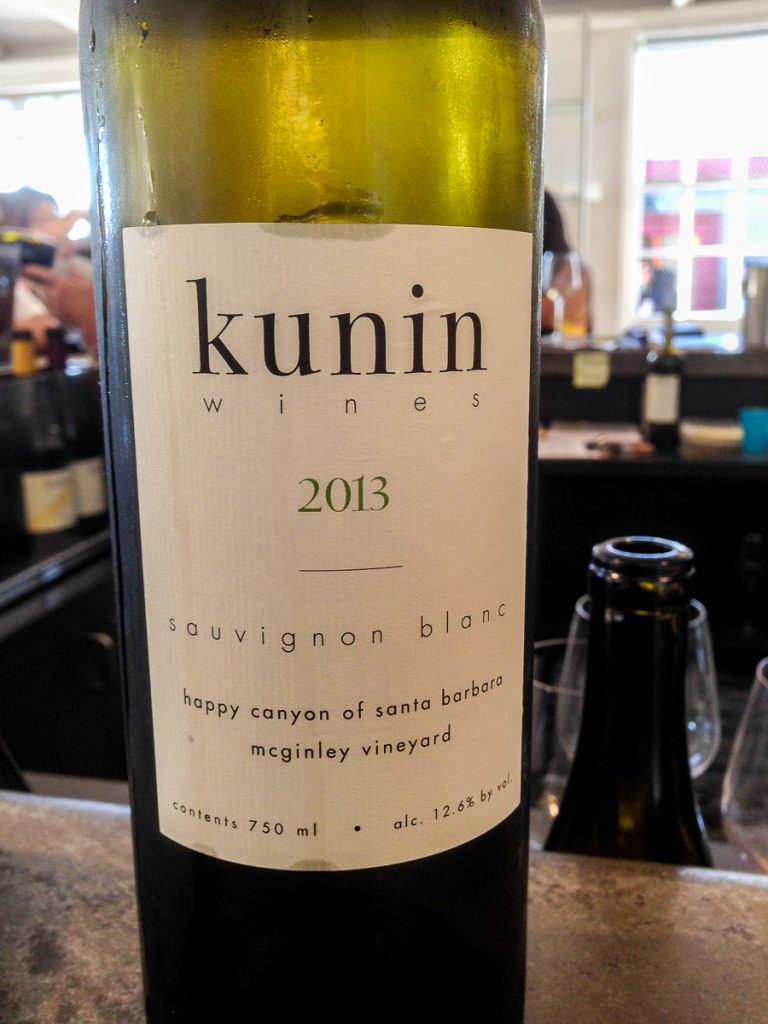 After that glass, we decided that we should try out the other 100% vegan winery, just so we could compare. Since we’d walked to the first winery (it was very close to our hotel), we thought we would go to the next winery on foot as well. It was close, but not as close. It was also during this walk that the alcohol began to make itself apparent and it took probably longer than it should’ve to get to the 2nd winery. Or maybe it just seemed longer. Whatever the case- it was dark by the time we arrived (not that this has anything to do with anything).

Carr Winery is pretty neat in that it’s more than just a tasting room. The tasting room is located in a huge warehouse where just a few feet away, you can see barrels of wine aging and people actually making the wine. By the time we arrived, they were no longer doing tastings so we each just had a glass of wine while we watched wine being made. It was a pretty neat experience. And for the record, the wine was pretty good, but we both liked Kunin Wines much more. (wine not pictured)

It was after this glass of wine that we started to get silly (in other news: we’re total lightweights). We took Uber to dinner because we needed to get some food in our stomachs before things got any crazier. 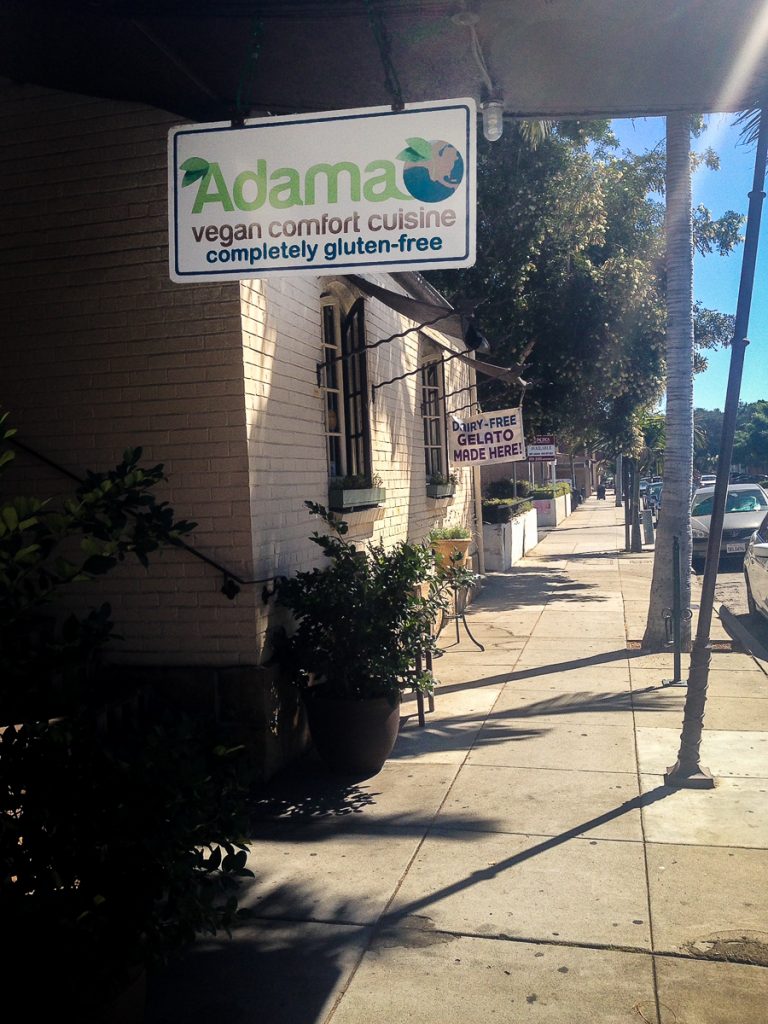 Chris and I had actually been to Adama before but it was years ago when we were vegetarian so we were unable to fully appreciate the greatness of this restaurant. I remember liking it and thinking it was pretty good but didn’t think much else of it. Not only is Adama 100% vegan, it’s also 100% gluten-free, and also 100% ridiculously delicious. 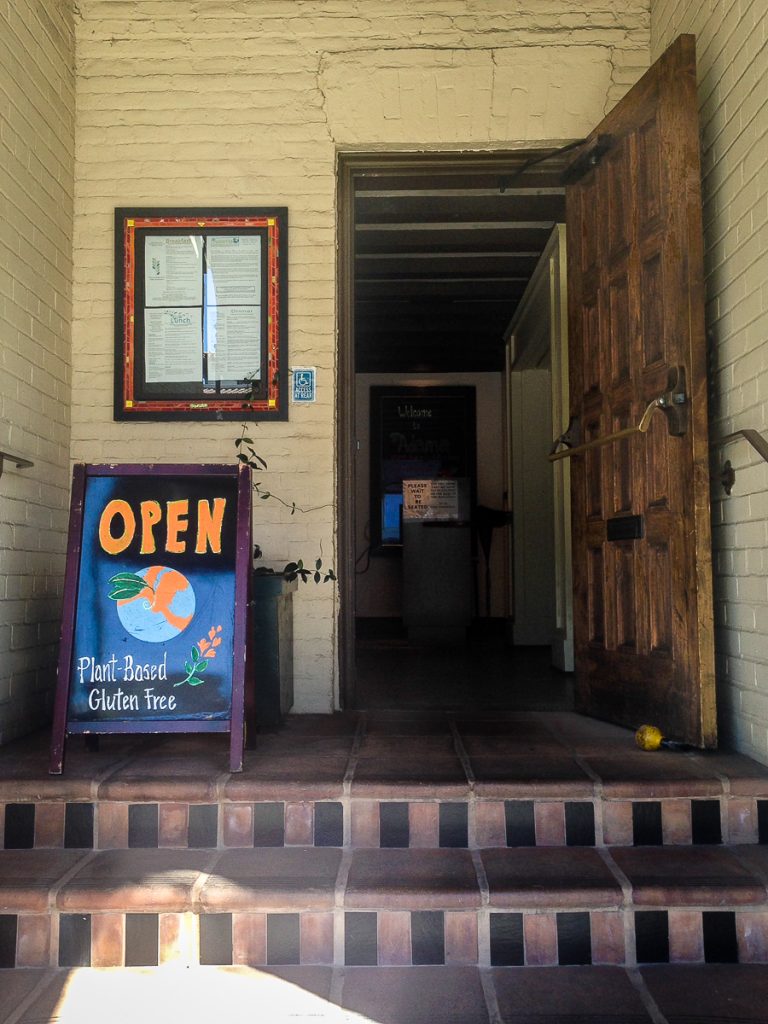 When we walked in, I was fully prepared to ask for a table in a well-lit area, but since I was a little inebriated and the hostess complimented my hair, I completely forgot. So we were seated in the darkest room in the establishment. Also, instead of using our iphones, we used our handy 1915-era cameras to take these pictures. 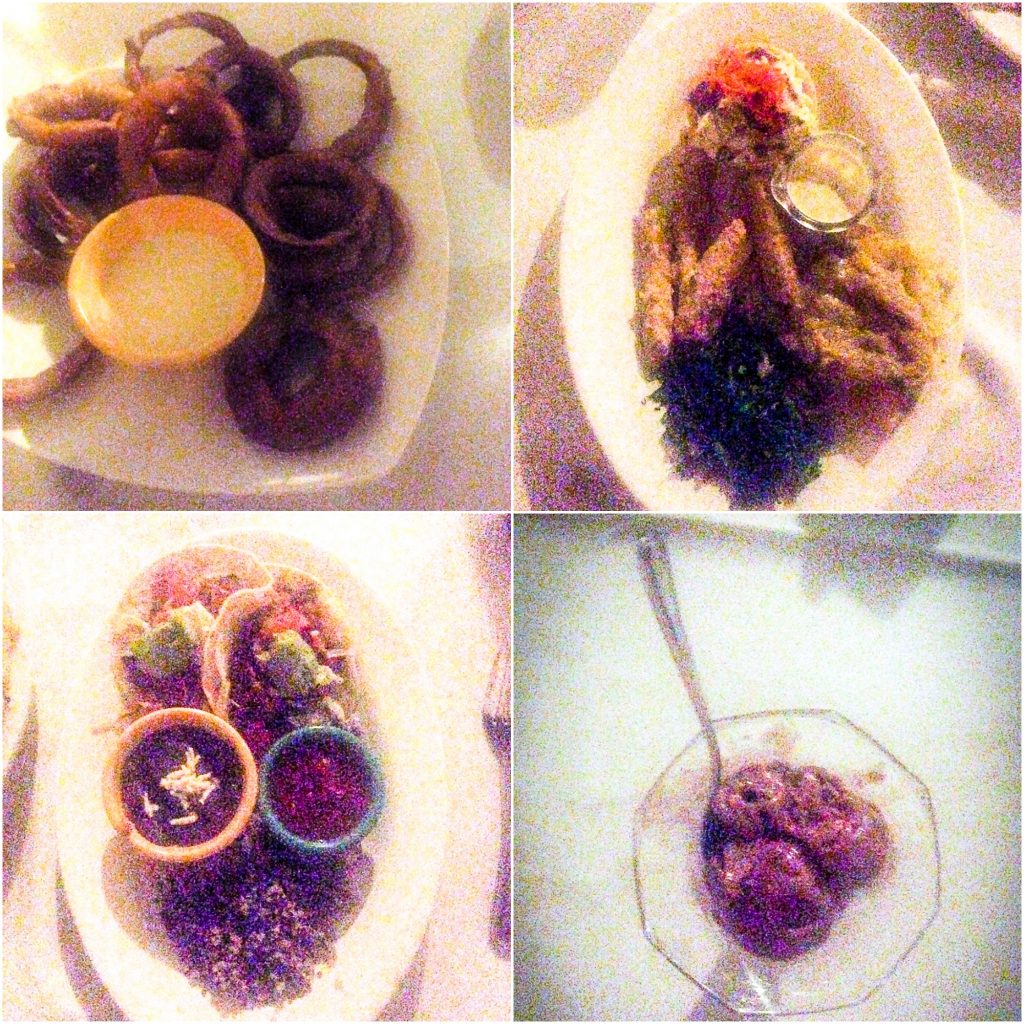 I’m just going to tell you what we ordered here. We started with the Curried Onion Rings, and then we shared the Vegan “AFC” (chicken strips, mashed potatoes and gravy, coleslaw, and cooked greens) and the Jackfruit Tacos. Everything was fantastic. Especially those onion rings. We still talk about those onion rings. For dessert, we got the cashew-based, homemade Chocolate Peanut Butter Gelato. Gelato, you guys! And there were peanut buttery chunks dispersed throughout the chocolate gelato and I think angels may have sung. I don’t remember.

Since we were so close to our hotel, we walked back late at night (which, we later found out was 10:30pm). I was so stoked that I was actually in a place with a television on the night that Sarah Silverman was hosting SNL, but I had an hour to wait. So I sat up, with a big bottle of water to wait for it to start (I found some Will & Grace reruns). Here’s how that went:

The next morning, after checking out,  we headed back to Adama for brunch. Yes- this restaurant is that good. This time, we sat outside in their adorable patio area since we had Samantha with us. 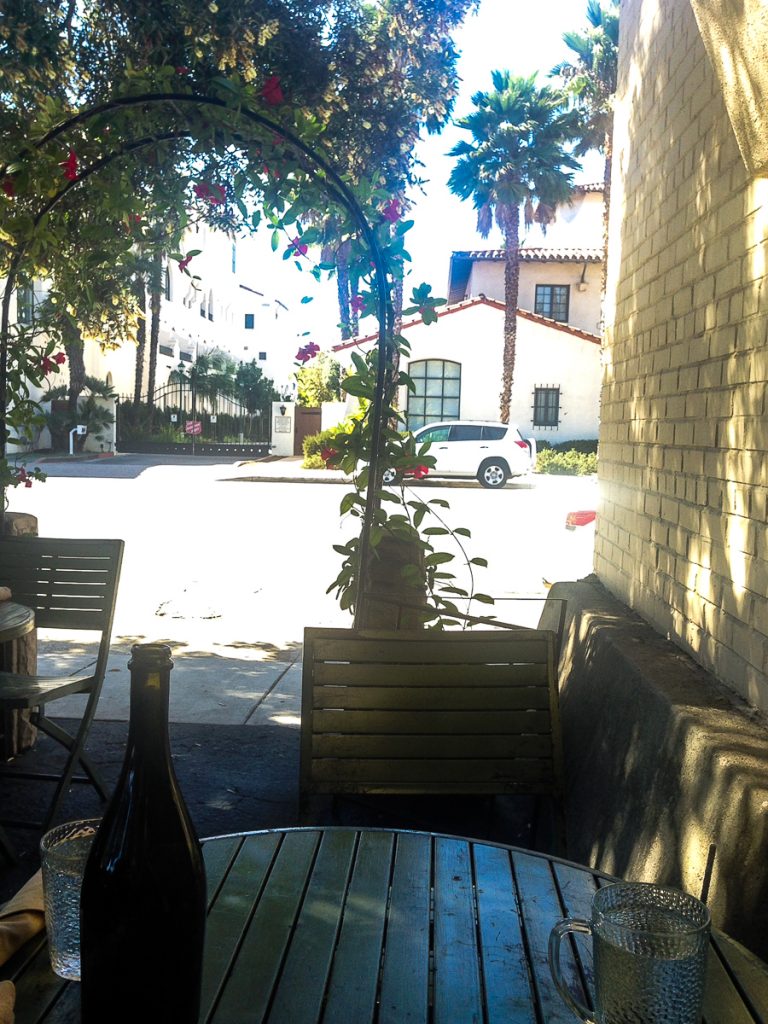 I got the Protein Scramble- a hearty mash-up of tempeh, pumpkin seeds, lentils, veggies (including butternut squash), cashew cheese and I subbed avocado for the daiya cheese. It also came with gluten-free toast. It was pretty wonderful and satisfied my brunch cravings. 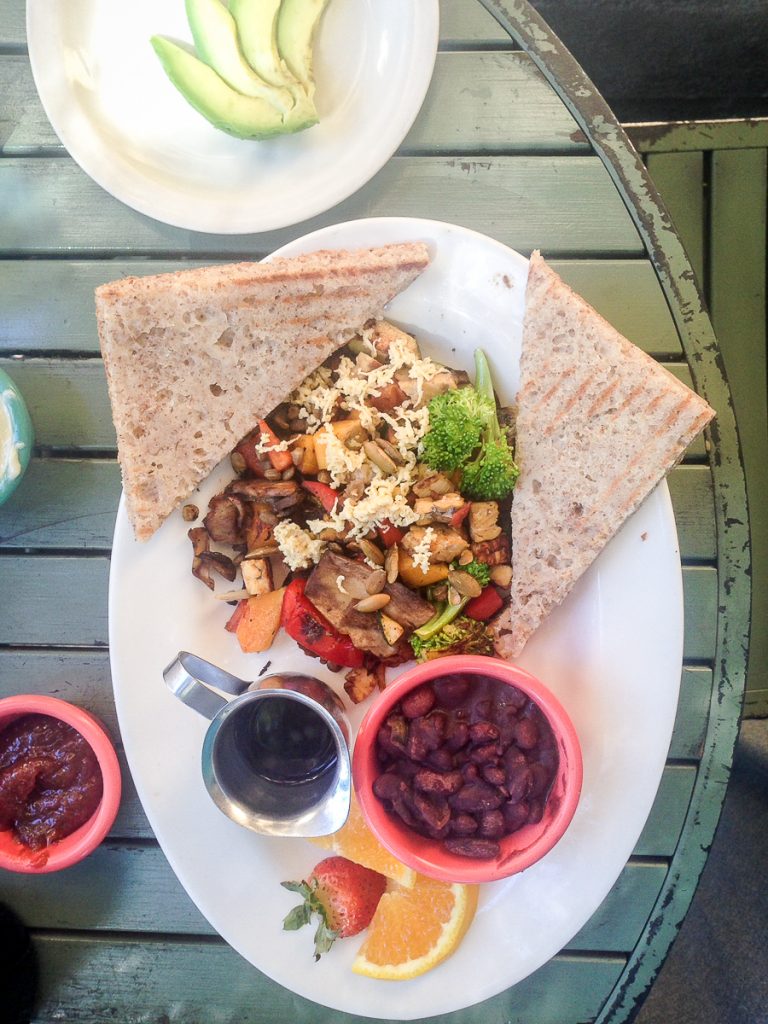 Chris got the French Toast (also gluten-free) which were actually more like french toast sticks with caramelized apples and syrup. He was pretty fond of them as well. 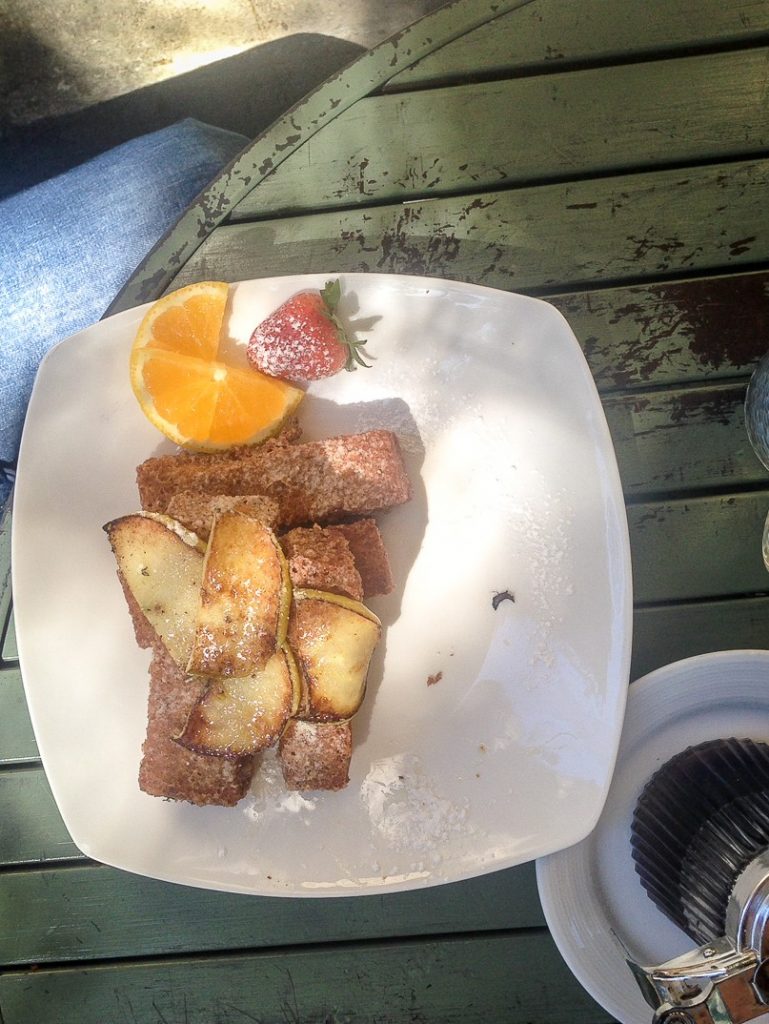 Another great thing about Adama is that they have a dessert case full of vegan, gluten-free goodies. 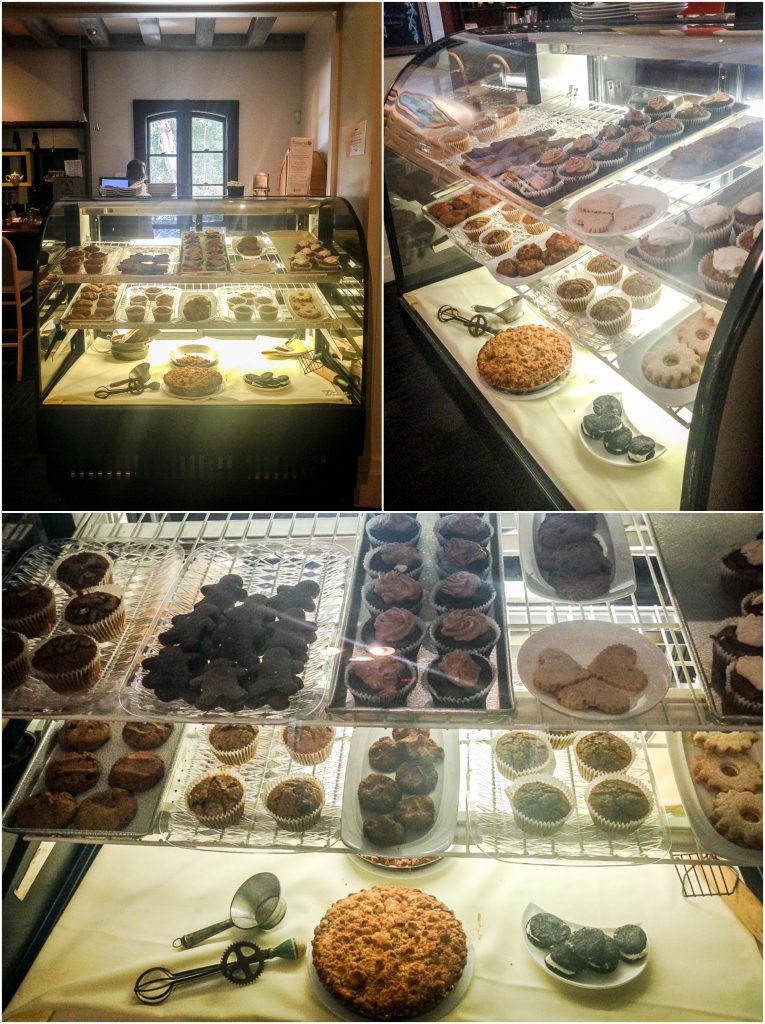 We got a chocolate chip muffin for the road and a couple homemade “Oreos” for later. The muffin, sadly, did not get photographed. But the Oreos did! From the looks of them, I was expecting a softer cookie, but they were crunchy, just like the originals. And also, like everything else, really, really great. 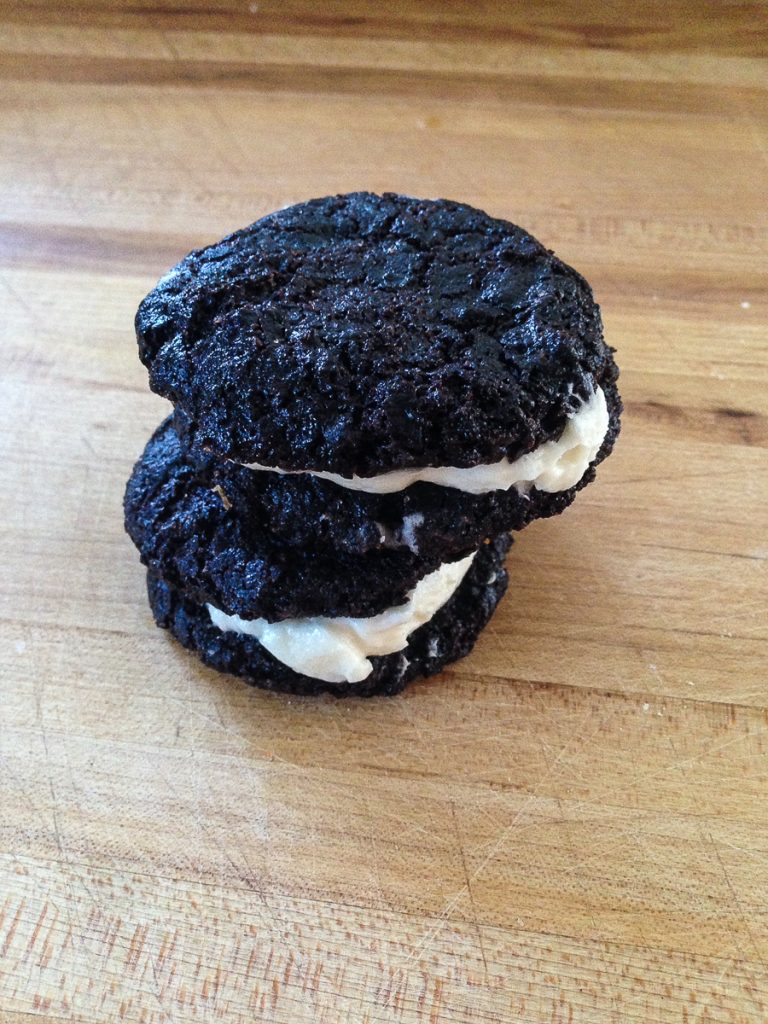 We had such an amazing time that weekend and are looking forward to the next time we can head back to Santa Barbara for a quick getaway. If you’re vegan and/or traveling with a canine, this couldn’t be a better city to visit. 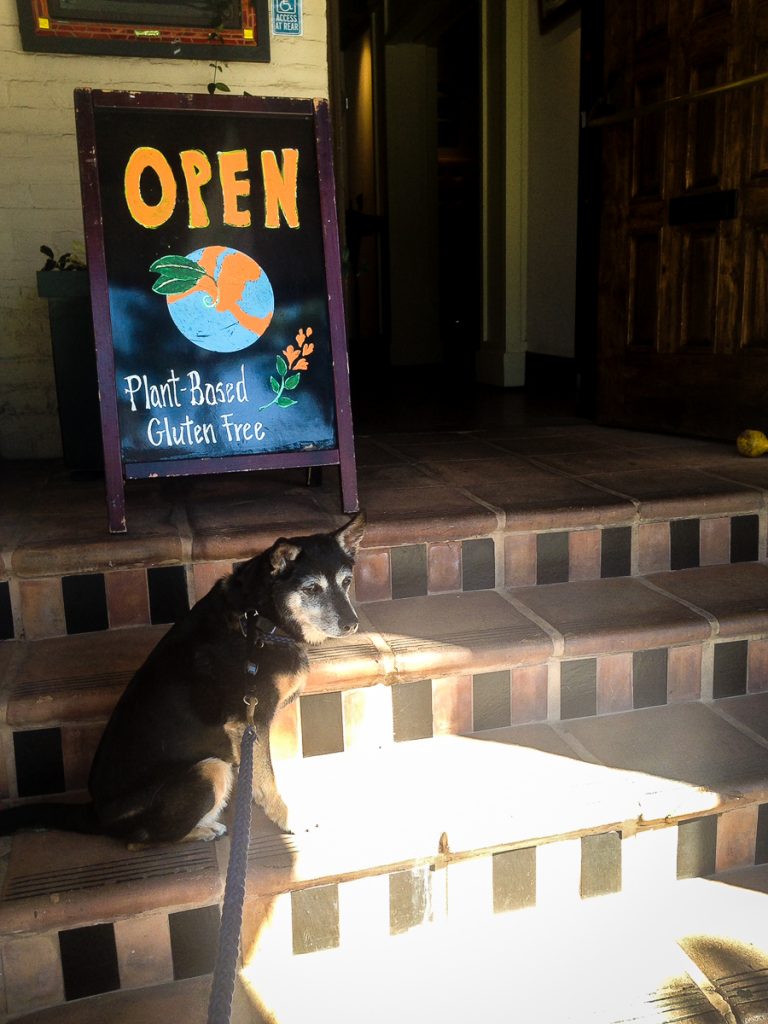