One of the things I’m loving about this “My Vegan Story” series is how I get to meet new-to-me vegans and be uplifted by their stories. Today, for your dose of vegan inspiration is Robyn Birkin of the blog, Modern Day Missus. I did not know Robyn prior to her sending me her story, but I now love following her on Instagram and through her blog and I get happy reading her comments here and there. I love her light-hearted but enthusiastic style. Robyn’s story really touched me and I’m sure there are elements we can all relate to. 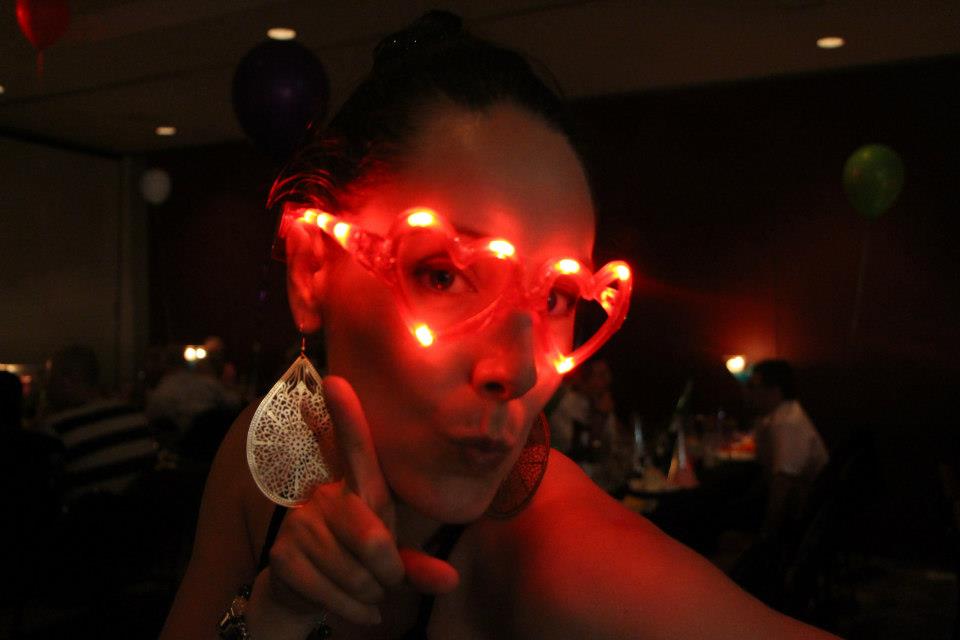 While on holiday when I was 14, I went fishing with some boys. My friend and I mostly just walked around the reef, but the boys caught some fish… and an octopus.

Little did I know that an octopus would have such an impact on my life!

It was on that fishing trip that, for the first time, I made the connection between a living animal and the food on my table. Not knowing what to do with the octopus, the boys put it in a plastic bag, and then put the fish in a linen bag and we all started riding our bikes back to our dorms. But the fish kept writhing about, so they took the fish out and started bashing them against the road to kill them.

I thought, “this ain’t right.”

Then, when we got back to our dorms, they put the octopus on the dining table, and the octopus tried desperately to escape from the tied plastic bag.

I swear I could feel the fear, the desperation and the sadness of the octopus, and all of a sudden, I stood up, grabbed the octopus, freed it, released it into the ocean again and declared that I had become a vegetarian.

I wasn’t a vegetarian because I thought it was any healthier, any better for the environment or because I didn’t like the taste of meat. I didn’t even really have any idea what the meat industry was like. I just thought that killing an animal to eat didn’t seem like a nice thing to do.

I was a vegetarian right up until my 18th birthday, when I set off to live in Japan, and where I was told that not accepting the food you’re given is the ultimate insult, so I put my beliefs aside and went with the flow.

Upon returning, I gave up red meat, but still ate chicken and fish, and continued that way right up until mid-2012, when I bought a copy of Alicia Silverstone’s The Kind Diet and Kris Carr’s Crazy Sexy Diet.

For the first time, someone was telling me that:

I no longer enjoyed the taste or texture of chicken and fish so giving it up was easy, but cheese? I thought I LOVED the taste of cheese. I resolved to become vegetarian and take it easy on the cheese.

Fascinated by what I had read in these two books though, I was inspired to learn more, and have now worked my way through an impressive number of books and documentaries that have further shaped my beliefs.

Over time I came to believe that a vegan lifestyle was healthier for your body (and in fact, animal products were actually unhealthy for you), that it was kinder for the environment, and that the meat and dairy industries were unnecessarily inhumane.

But, it didn’t tip me over the edge to giving up dairy and eggs.

Like every vegan before me, I had thought that vegans were a little weird and that I could never give up my beloved cheese.

That was, until I saw Earthlings.

Words cannot express the sheer horror and sadness I felt when I watched that documentary. In fact, I was so saddened by it; it took me five attempts to watch the entire thing.

My husband kept asking me why I kept watching it if I was so upset by it, but I don’t ever want to not know what is happening in my world.

One of the biggest mysteries to me is people who say they don’t want to know.

And then, as soon as I finished watching the movie, I was vegan.

I can’t pinpoint the exact day this happened, but it has now been about six months.

Becoming vegan has been so much easier than I ever thought it would be, and I honestly haven’t been tempted to eat animal products once.

My body felt good before I became a vegan, but now my body feels great! It is easy to get up in the morning, my body feels lighter, and my hair and skin feel so much better.

Although all of the other books and documentaries I’ve watched (see my blog for a list) and read convinced me that a vegan lifestyle was a healthier and kinder choice, it was Earthlings that shocked me into making the change, and that, together with the health benefits that makes it easy to stay vegan.

I also have this newfound inner peace, that I find hard to describe but which I adore. Everything around me feels calmer. 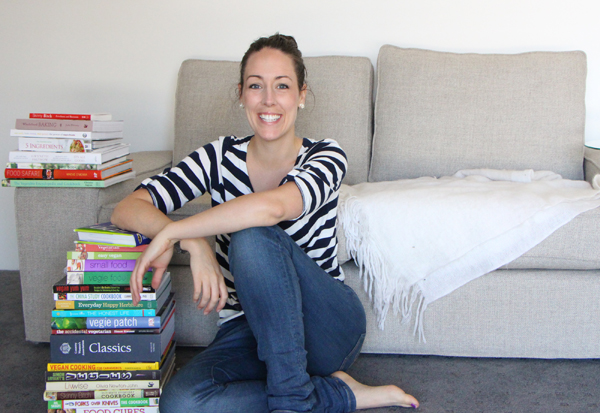 WERE YOUR FRIENDS AND FAMILY SUPPORTIVE OF YOUR CHOICE TO BECOME VEGAN?

None of my friends and family is vegan, and none of them really understand my lifestyle choice, but nobody has ever been rude or outwardly unsupportive of me. Generally, I try not to make a fuss, but if someone initiates a conversation with me, I’ll happily explain my lifestyle.

I am 100% confident in my decision to embrace this lifestyle, which helps to block out any push back.

My husband, Rosco, has never really eaten red meat, but he does still eat chicken, pork and occasionally, fish. In truth, it frustrates the hell out of me, but I am thankful he isn’t a giant carnivore. If I could see a positive side to this, it would be that it keeps me on my toes.

My challenge is to create healthy and delicious vegan meals that he will enjoy and I’m slowly building up to an amazing meal plan for a month that will knock his socks off! Caitlin from The Vegan Chickpea challenged her husband to take a vegan trial and see how it made him feel. Three years later, he is still a vegan. I’m scheming a similar challenge for Rosco…

I have found support and inspiration however in the many books, documentaries and blogs I read, such as Keepin’ it Kind, Vegan Sparkles, Happy Herbivore and My New Roots, just a handful in a huge number I’m subscribed to.

I love recipes that are simple to make and don’t contain a tonne of ingredients – my favourite lunch is a quinoa salad with a tahini and mustard dressing, or basically anything else with avocado!

My go-to dessert is this four ingredient chocolate fudge. I’ve given this fudge to heaps of people, and they all love it.

At other times, I just like to keep it simple – some rice or mashed potato, a bean and mix it up with some seeds and veggies.

HOW DO YOU MAKE THE WORLD BETTER FOR ANIMALS?

There is a famous saying “Be the change you wish to see in the world.” I want to encourage others to consider a kinder lifestyle by being an example of health, kindness and happiness.

I am a member of Animals Australia and regularly contact my local politicians to bring issues to their attention.

I also make a point of asking questions and making requests for items at local supermarkets and restaurants. I figure, if everyone contacted their local supermarket and asked them to stock vegan items or enquired about their policies on the welfare of animals, eventually they would have to listen. 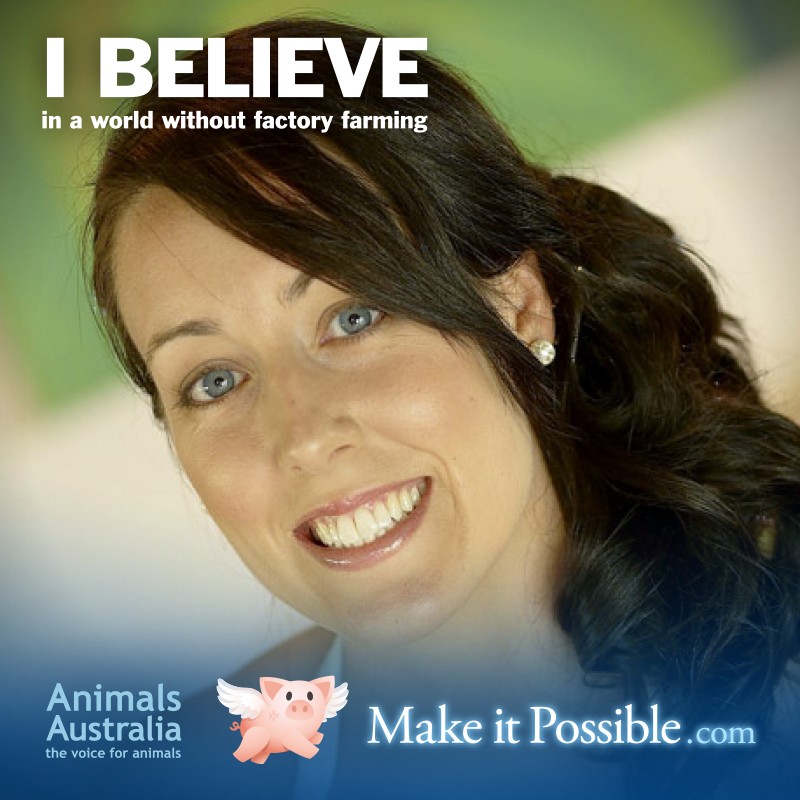 If I could give myself one piece of advice, it would be to always tell waiters that you’re vegan. You may not wish to cause a fuss and just ask for the burger without the cheese, but if you don’t make a point of asking for it to be vegan, it will inevitably come with a creamy sauce or something else!