When I told my cousin that we were going to Austin, he said "It's too bad you can't have any of the barbecue." He was surprised when I told him that it's very easy to be vegan in Austin because Austin is super vegan-friendly and actually has a pretty strong vegan community. I was very excited to visit this vegan haven in the middle of a state whose food scene mostly revolves around meat and barbecue. Very excited.

The original purpose for going to Austin was for Vida Vegan Con 2015, but we wanted to get in a little early to do a book signing event at BookPeople and spend some time hanging out in this city I'd heard so much about. We got in to town on a Wednesday, the day before my event at BookPeople. Because I wanted to bake cookies for the event and also because the hotel for the convention was booked until Friday, we chose to stay at an AirBnB in east Austin, giving us access to a full kitchen. We booked it months in advance, so that by the time we got there, I'd forgotten what it looked like. We were both blown away and fell in love with the place at first sight. 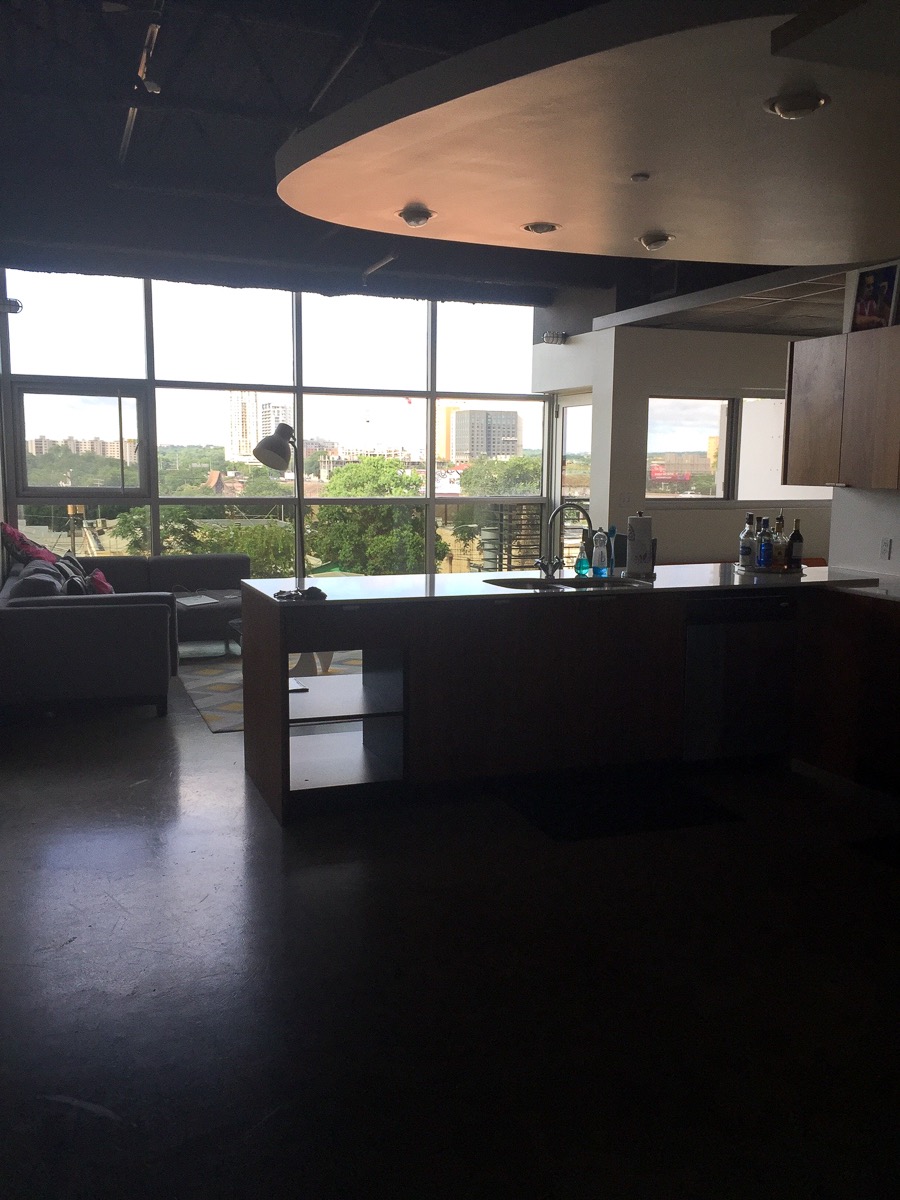 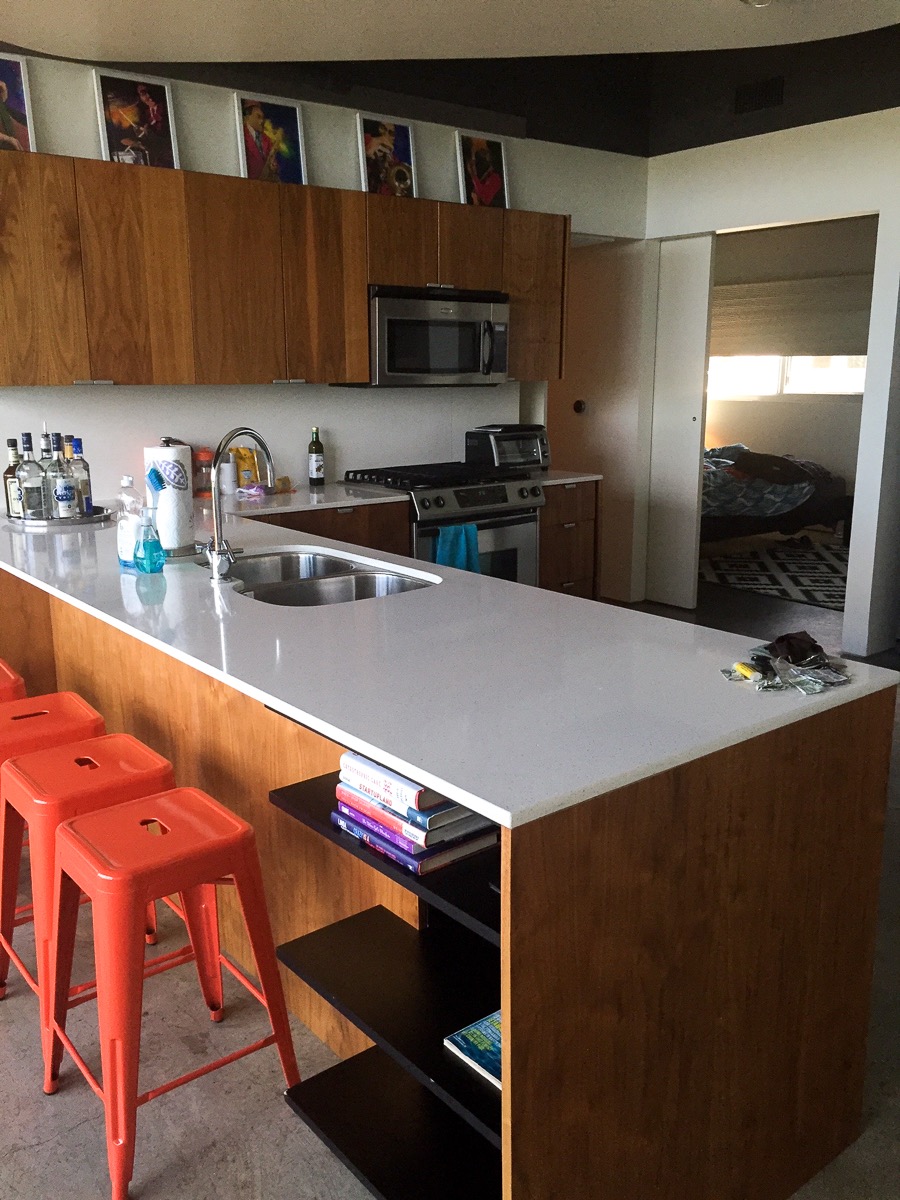 After we dropped off our things, we were ravenous and needed to get something to eat, stat. When I checked HappyCow, the nearest vegan restaurant to us was Counter Culture. I'd actually heard good things about the restaurant beforehand and it's Austin's only 100% vegan sit-down restaurant, so we decided we needed to go there. 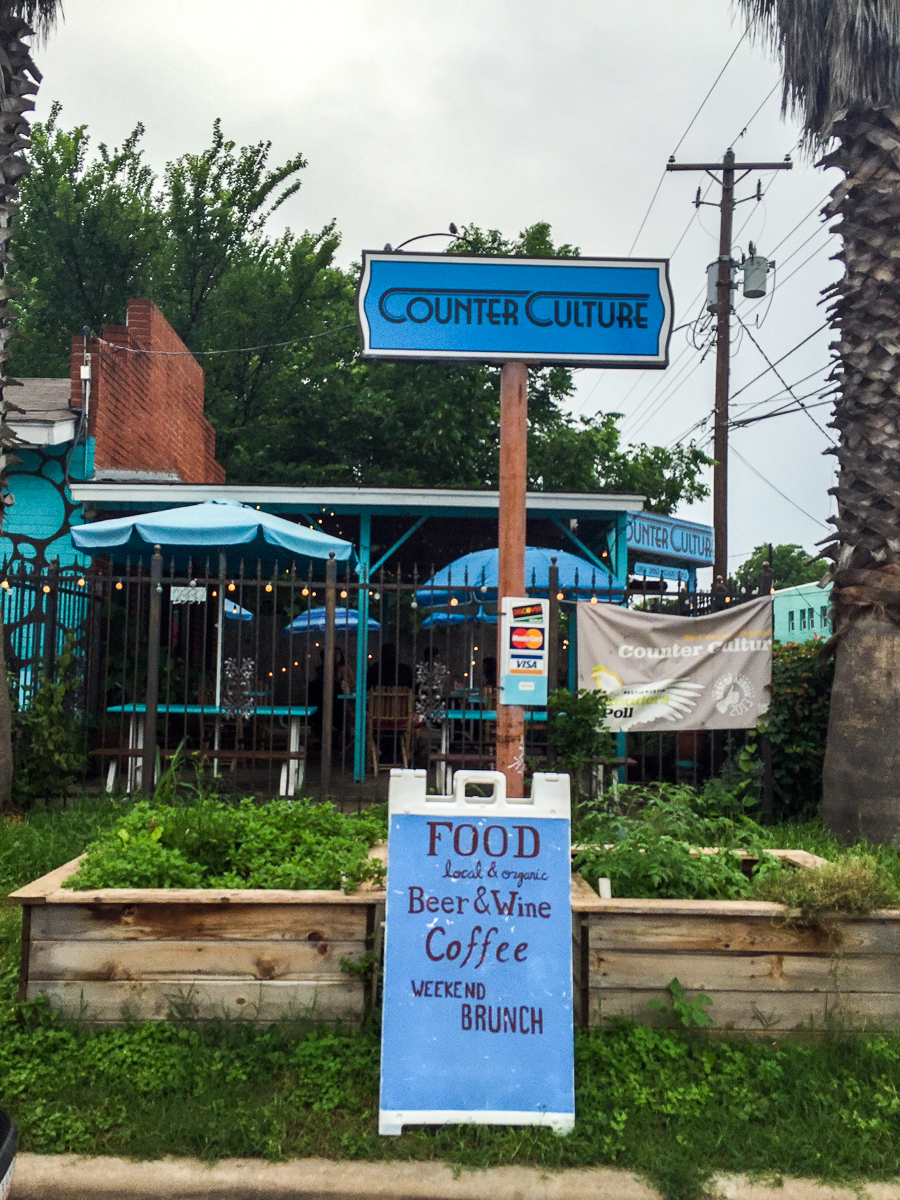 Even though it was a bit drizzly outside (this was a couple days after that huge storm and flooding that was all over the news), we chose to sit outside in their covered patio. 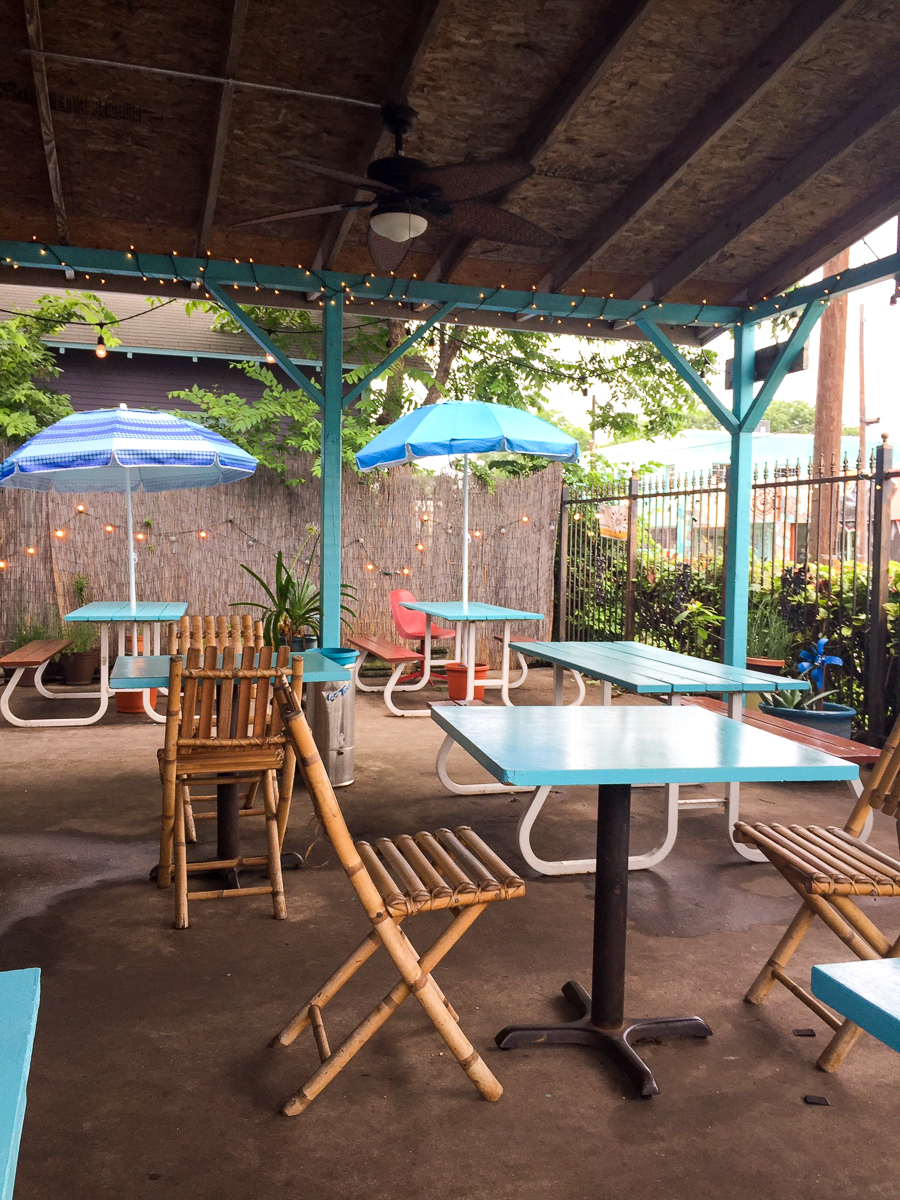 We were so hungry, we needed an appetizer so we ordered the Spicy Baked Artichoke Dip with gluten-free bread. The spiciness is very subtle and I loved how creamy it was with little chunks of artichoke. It was quite nice. 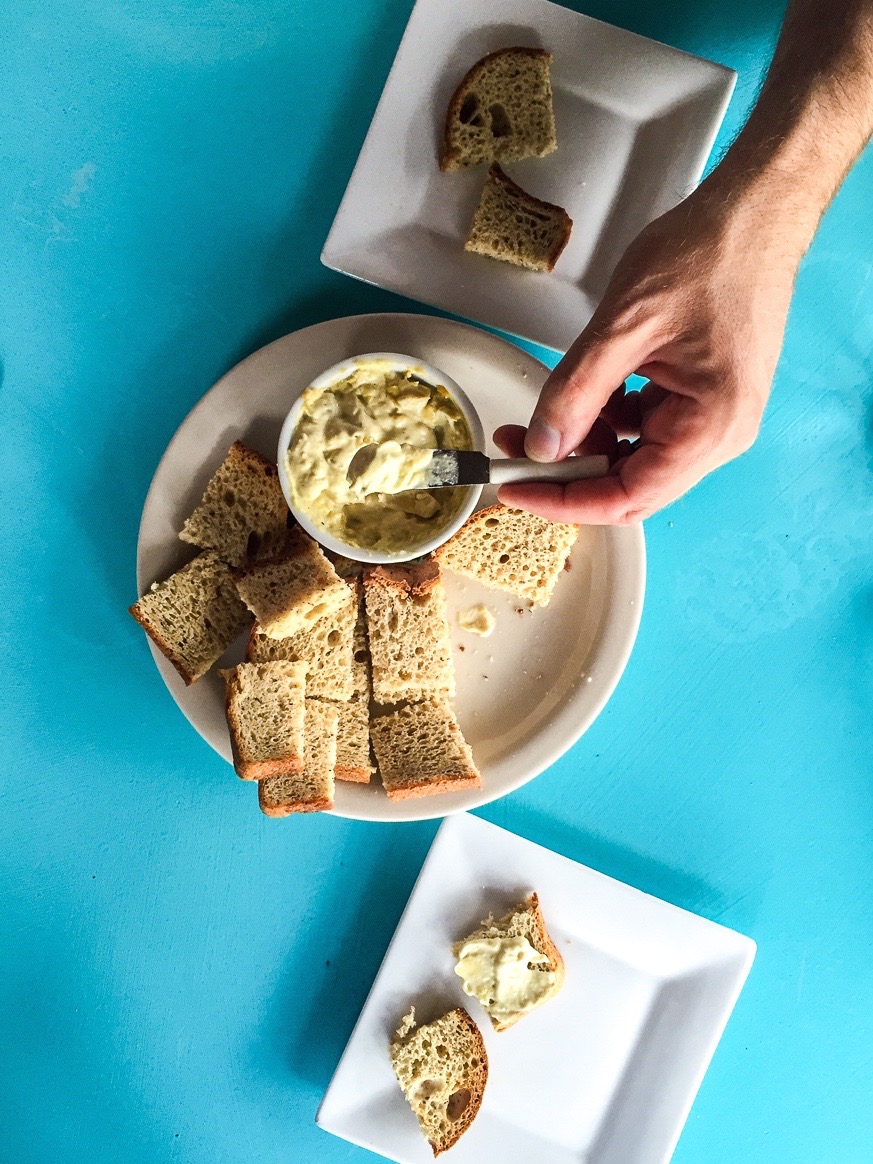 We'd not quite finished our appetizer before our main dishes came. Chris ordered the Meltdown, a plant-based tuna melt-style sandwich, with a side of potato salad. He was crazy about that sandwich. Like, he wouldn't stop talking about it for a couple of days kind of crazy.

Since going gluten-free, it's pretty rare that I order a reuben because not all restaurants have gluten-free bread. Even though tempeh is not my favorite in a reuben, this one was pretty good. There was soooo much sauerkraut! Also, that's Chris being "mysterious" in the background. 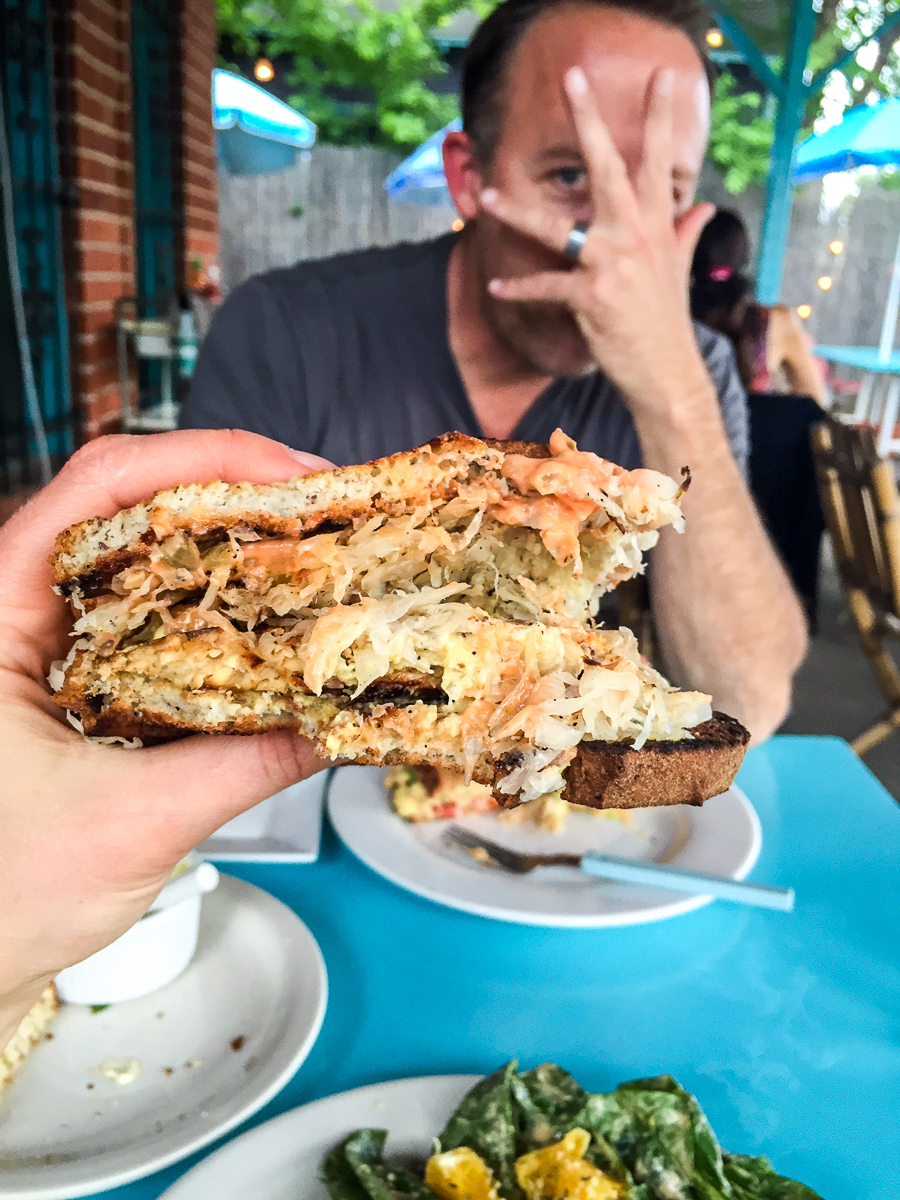 We were stuffed but not willing to turn-down raw, vegan, gluten-free donut holes, we had to take a couple of their chocolate-covered variety to eat later. We actually don't have pictures of them because we didn't realize that the chocolate was covered with coconut shreds and neither of us care for coconut. So, we didn't love these.

Cadry and David got into town shortly after we ate, so they came and got us from our cool pad and we went to dinner with them. At Counter Culture. We didn't eat anything- we just came for the company. We actually ended up going back to Counter Culture for dinner on Saturday night with Cadry and David. Chris ordered the Sausage and Sauerkraut Sandwich. It was exactly what it sounds like. He liked it but wasn't as crazy about it as he was the Meltdown. 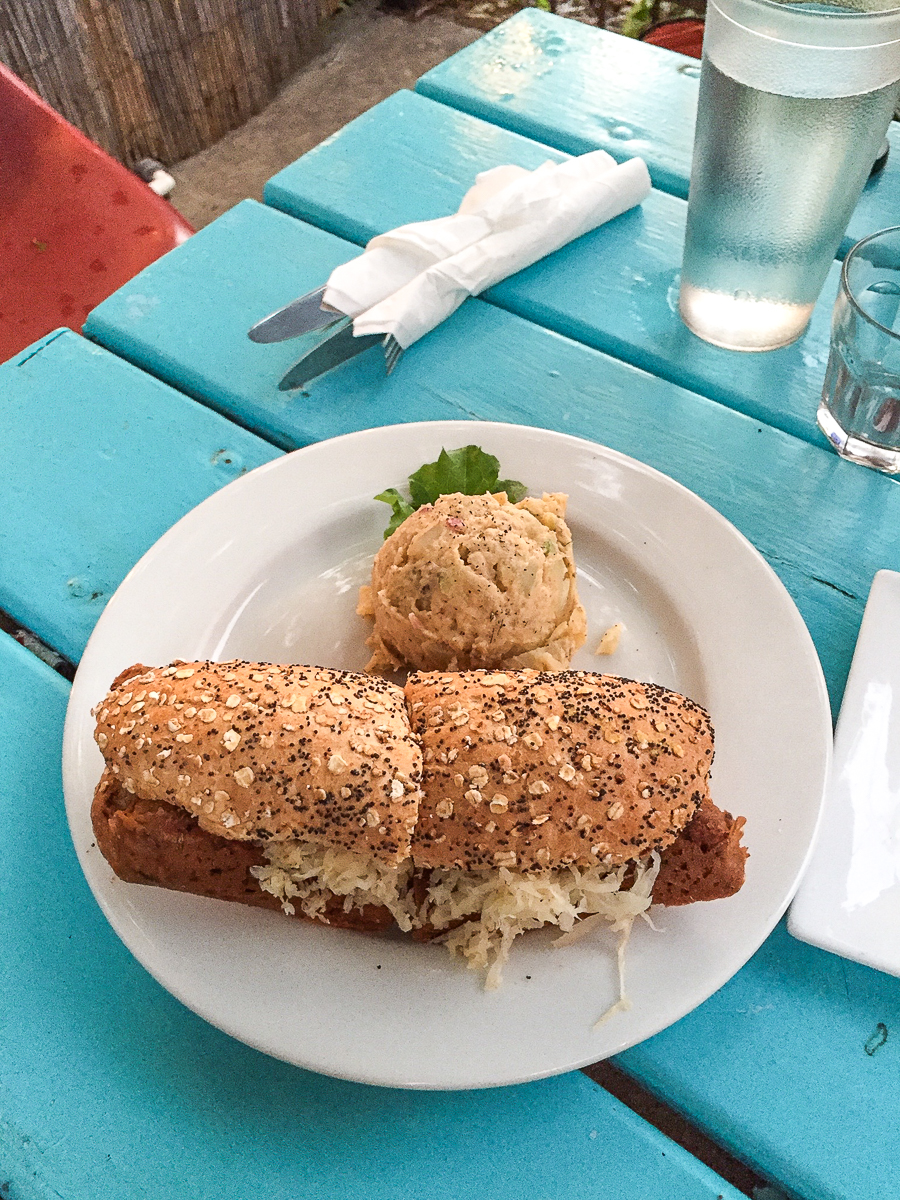 Because Chris had raved so much about the Meltdown, I had to try it myself, on gluten-free bread. It was pretty great, but I wasn't as fanatical about it as Chris was. I also quite like the caesar salad (those are gluten-free croutons!). 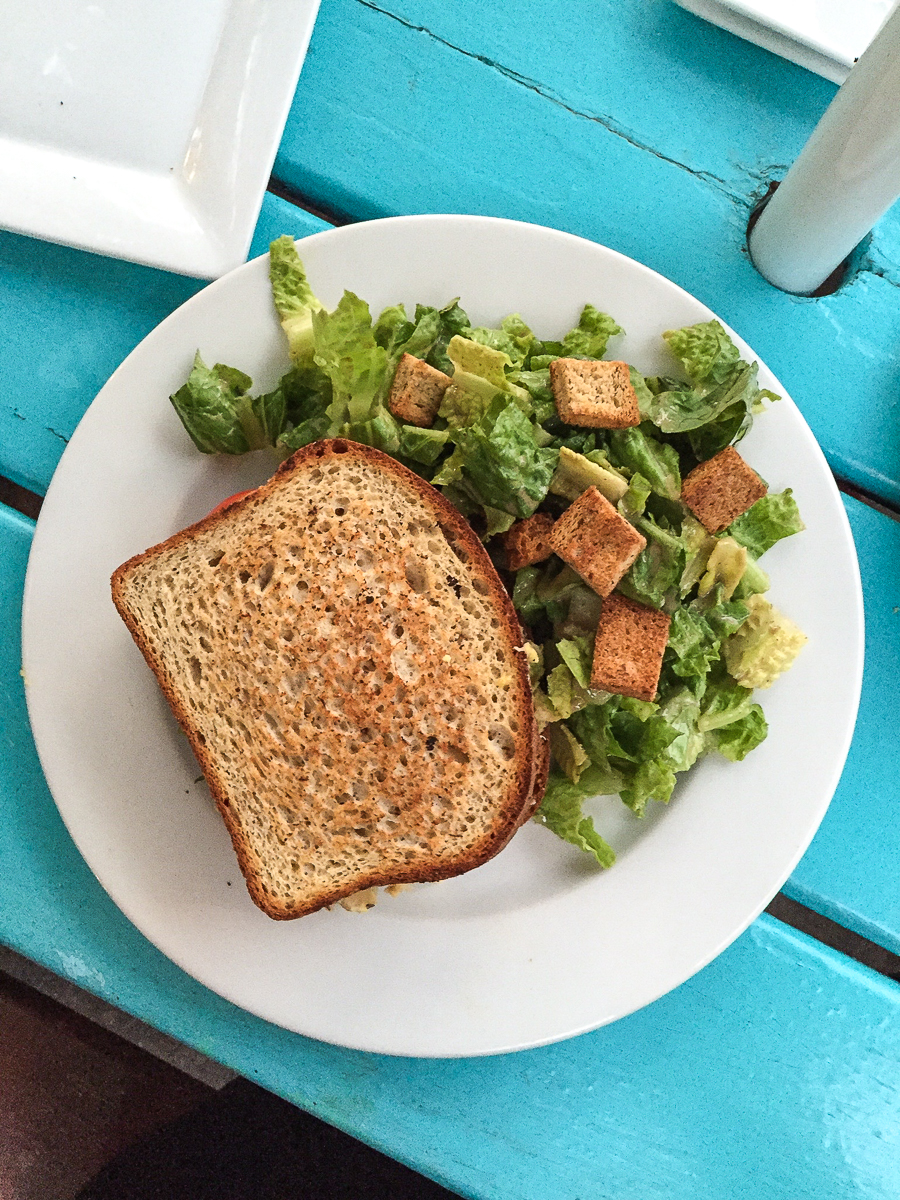 But back to the next morning, we met up with them for breakfast at Bouldin Creek Cafe. Bouldin Creek Cafe is a vegetarian restaurant and almost everything on the menu can be made vegan. Before coming to Austin, I'd been hearing for, like, two years that breakfast tacos in Austin were something you have to have at least once in my life (mostly from my friend, Stephanie [aka Lazy Smurf], who co-started the whole #tacocleanse movement and is the co-author if the upcoming book of the same name), so naturally, I ordered two breakfast tacos. I ordered the Tofu Chorizo (containing tofu scrambler and their homemade veggie chorizo) and the Tofu Neal (containing their tofu scrambler, sauteed mushrooms, and spinach). These were everything I'd hoped my breakfast tacos would be and more. Their tofu scramble is probably the best tofu scramble I've ever had. It has an almost crispy, nutritional yeast-coated exterior. It is just above and beyond. I loved both tacos, but next time, I'd probably order two of the Neals. 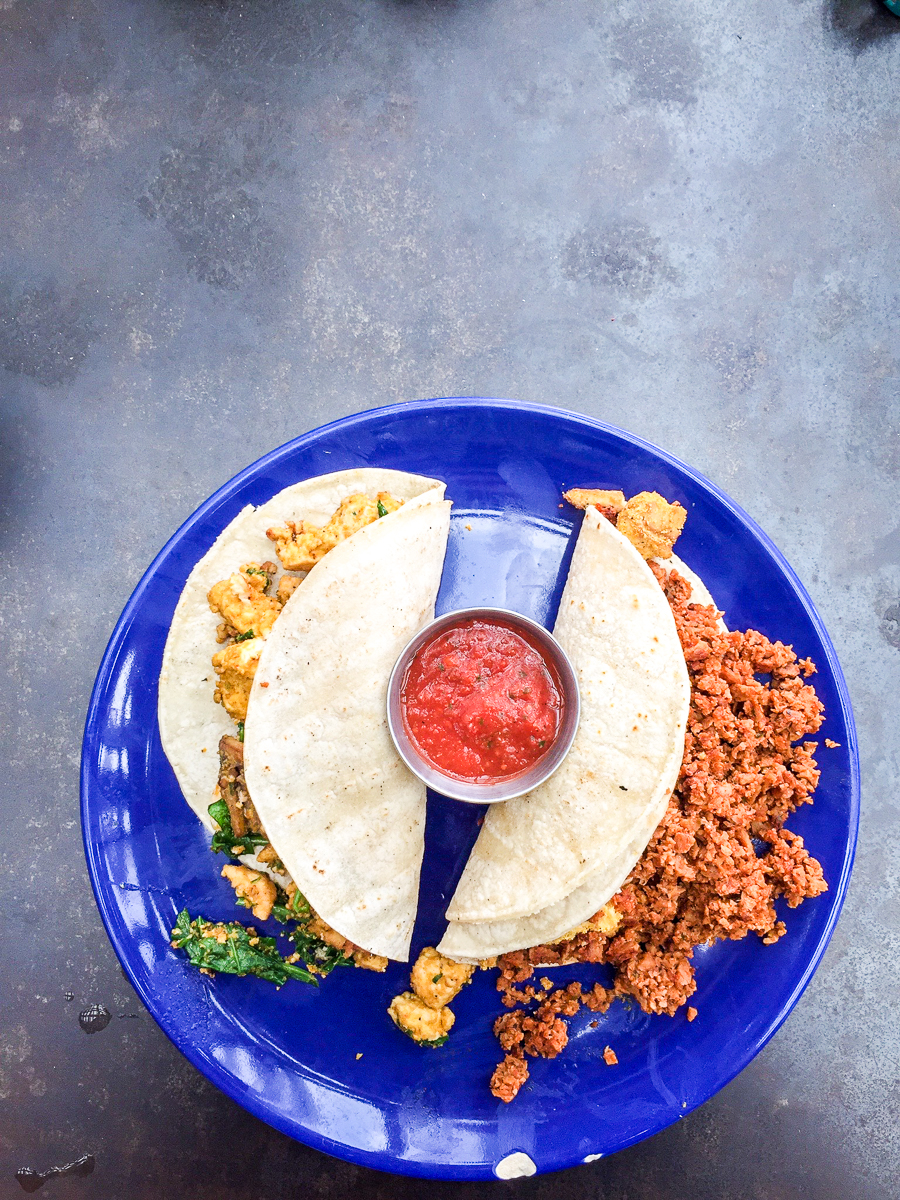 Chris also ordered breakfast tacos. He also ordered the Tofu Neal in addition to the Timmy. The Timmy contains their veggie chorizo, beans, lettuce, and tomato. He also was a pretty big fan of the tacos.

After the event at BookPeople (which I'll tell you all about shortly, David, Cadry, Chris, and I went back to Bouldin Creek for Dinner. 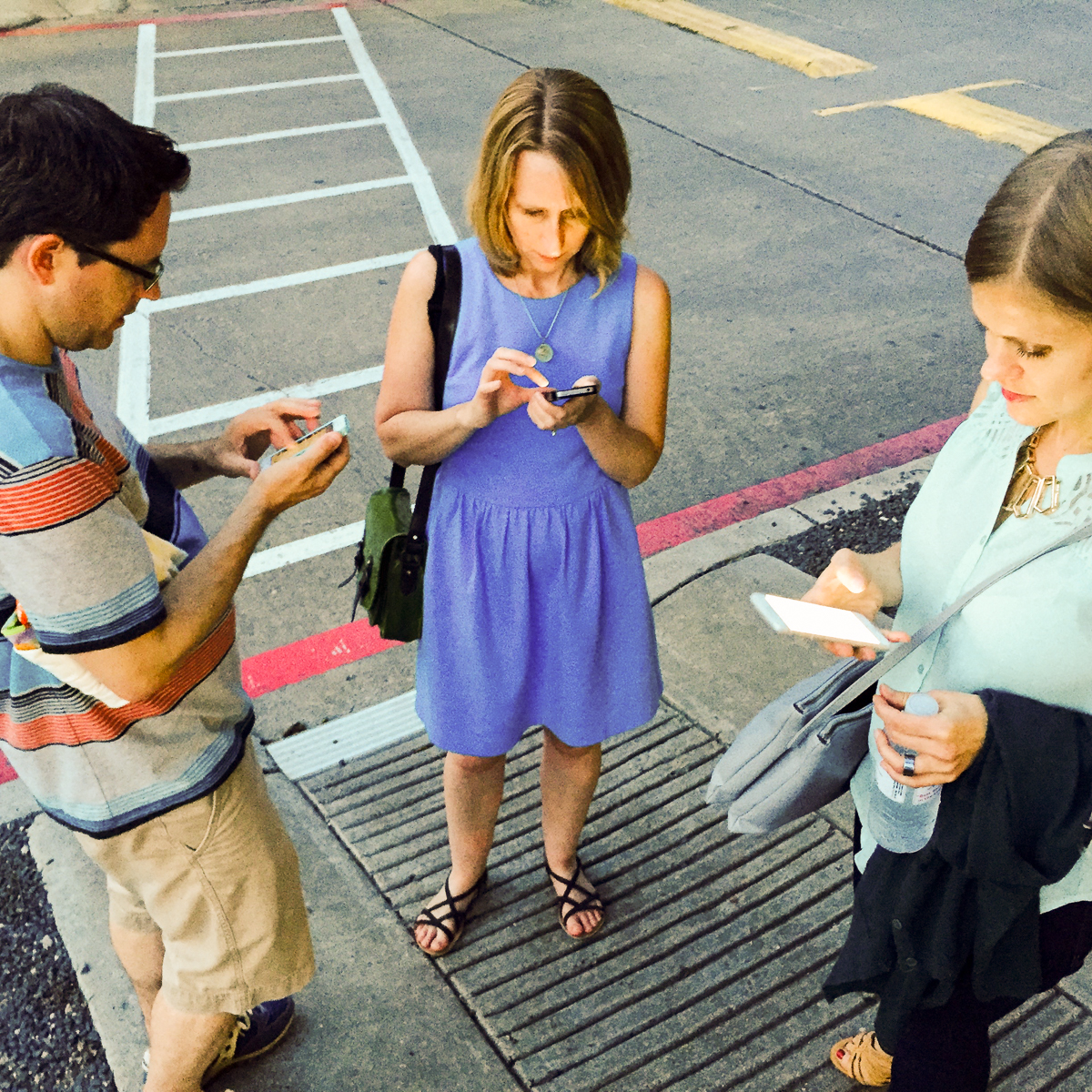 We spent several minutes trying to figure out where to go (as you can see us doing above) and finally settled on Via 313 because we'd heard that they have great vegan options and a gluten-free crust option. When we got there, however, they told us that the gluten-free crust was made with egg so it wasn't vegan. Not wanting to look around anymore, we headed back to a restaurant we knew would have something for each of us. Shortly after we were seated At Bouldin Creek, Amey and her mother arrived, and we were more than happy to let them join our party. It was a really wonderful evening and we stayed and talked until long after the restaurant closed (Sorry to our waitress, Blake!). Chris ordered the South Austin Stir-Fry (from their specials menu) and I ordered the Soul Food Plate, but oddly, neither of us took pictures (Cadry also ordered the Soul Food Plate and you can see her pics here). These dishes were okay but we weren't as blown away by those dishes as we were by the tacos we'd had that morning. 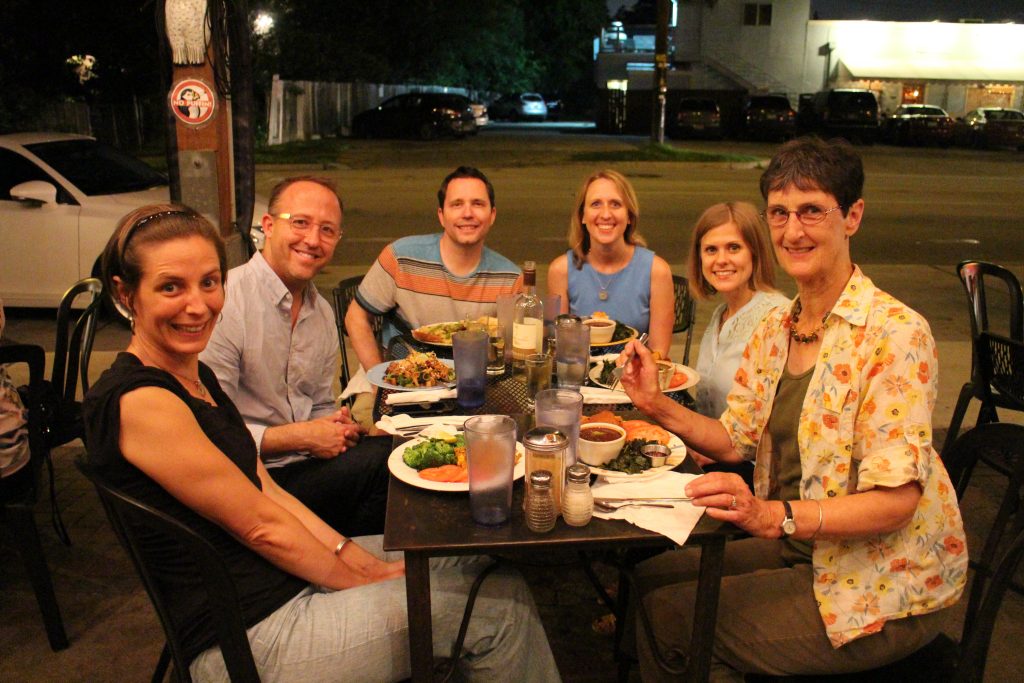 We actually came back to Bouldin Creek one more time during our trip- on the last day of the conference, Jess and Sarah wanted to have dinner there before going home the next morning so we were all happy to join them. 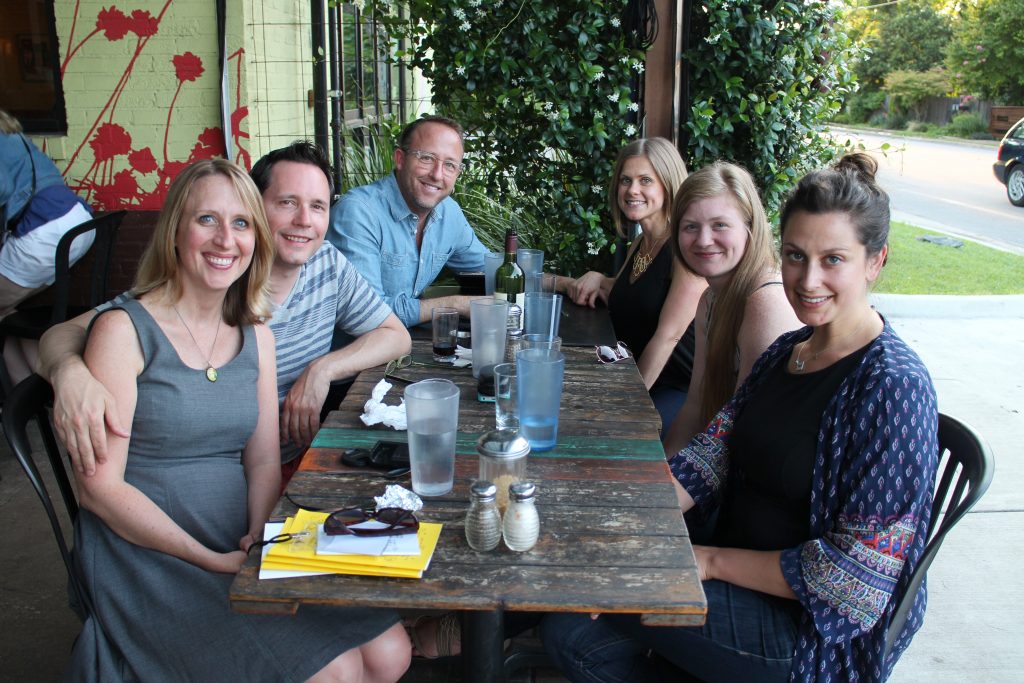 It was a great farewell dinner with our friends, old and new. 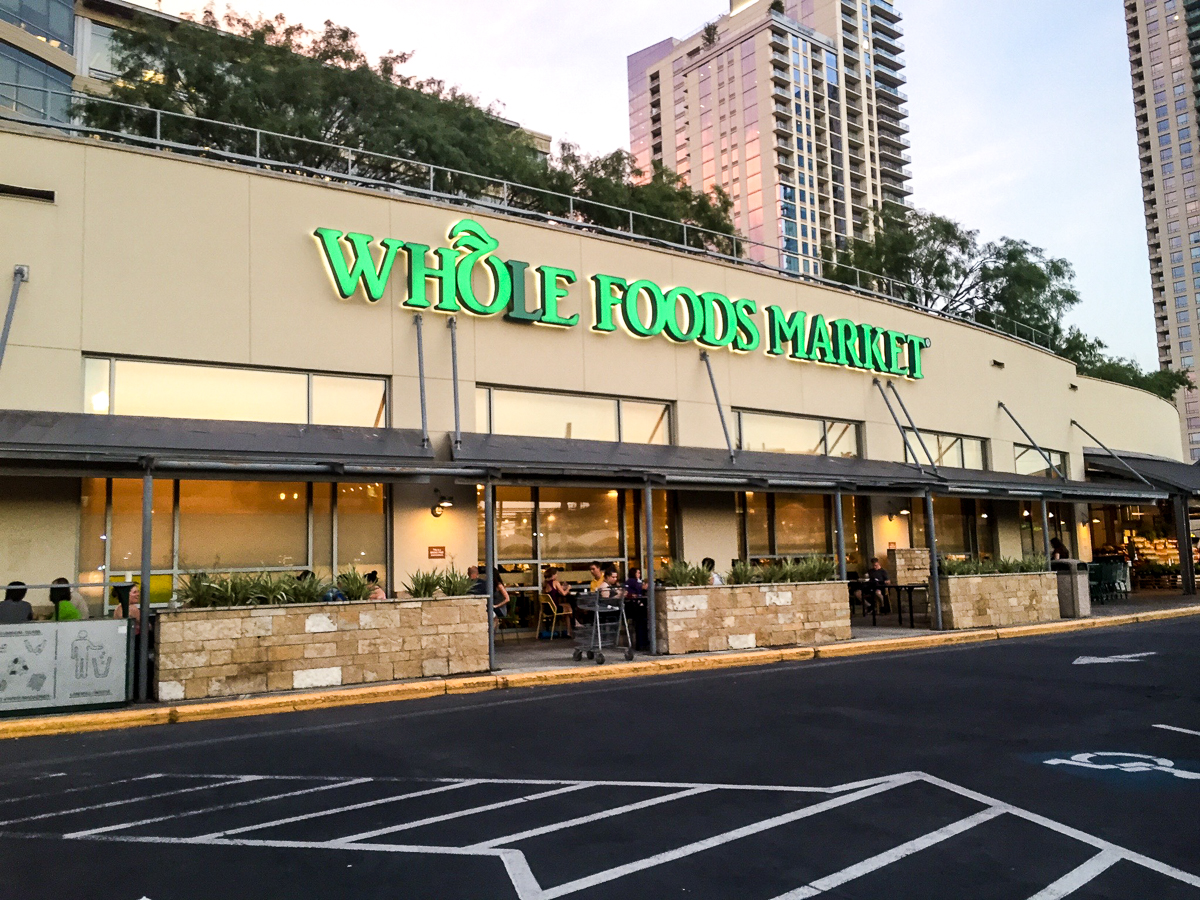 Anywho, after brunch on Thursday morning, I went with Cadry and David to check out the infamous Austin Whole Foods Market, the company's flagship store, and pick up a few ingredients I needed for the cookies for that night's event. I can see what all the hype is about. It's pretty huge and had several things I hadn't seen at my local Whole Foods. If you're a grocery store connoisseur like me, then you should check it out. 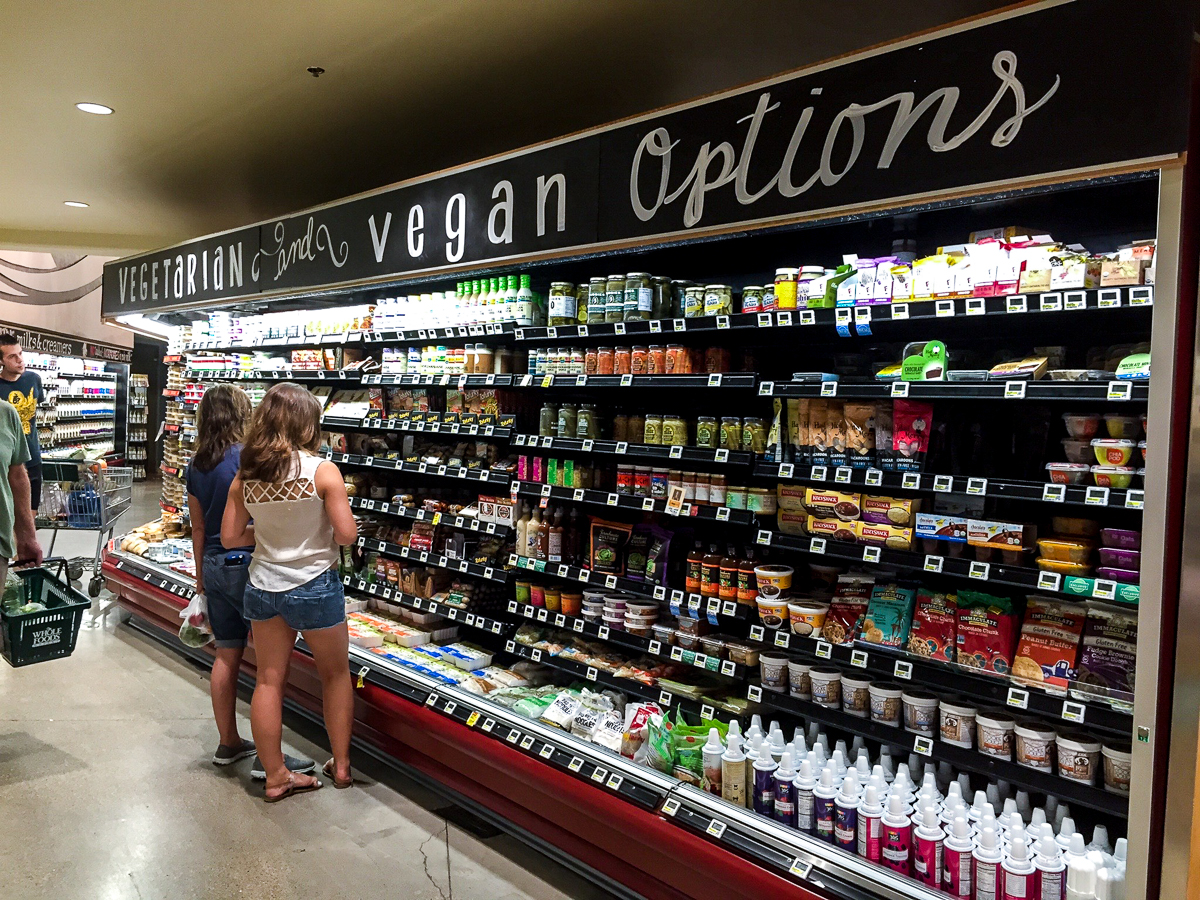 Now let me tell you about what a California girl I am. While I was baking cookies, the weather went from being sunny and beautiful to overcast and pouring rain. I was wearing shorts and flip-flops so before we left for the VVC Meet & Greet, I decided to change into my event clothes (since we were going to go there shortly after the Meet & Greet anyway). I put on jeans and boots and a cardigan (what we wear when it rains in California) over a sleeveless blouse. We brought our umbrellas.

Somewhere between our AirBnB and Buzzmill Coffee (where the Meet & Greet was being held), the sun came out and brought some ridiculous humidity with it. As soon as we arrived, I had to lose the cardigan. We sat down at a table with some of our friends and I don't even remember what we were talking about. I was sweating so profusely, it was all I could think about. I was sure that my shirt was soaked. My hair that I'd carefully blow-dried and styled was now looking like I'd gotten stuck in that storm earlier. I had to excuse myself to the bathroom where I could clean myself up a bit. Luckily, Sweet Ritual was there, selling some vegan ice cream, so as soon as I came out of the bathroom, I bought myself two scoops of ice cream. Golden Spike Rail Cart was there, selling vegan food, and from what I saw, it looked pretty good (From what I understand, that was their last weekend selling food from the cart. They will have pre-made food for sale at Buzzmill along with several other Austin grocery stores. Check their Facebook page for updates.). Buzzmill Coffee also has many vegan options. I was too hot to eat anything (or take pictures as it appears). Moral of the story: Don't trust Austin's wild weather whims. Prepare for warm weather. And also, take pictures of everything.

We left a bit early to get back to the AirBnB, grab the cookies, and change into something less sweat-stained before heading to BookPeople. As soon as we arrived, I got so excited. I'd never seen my name on a marquee before. But there it was. 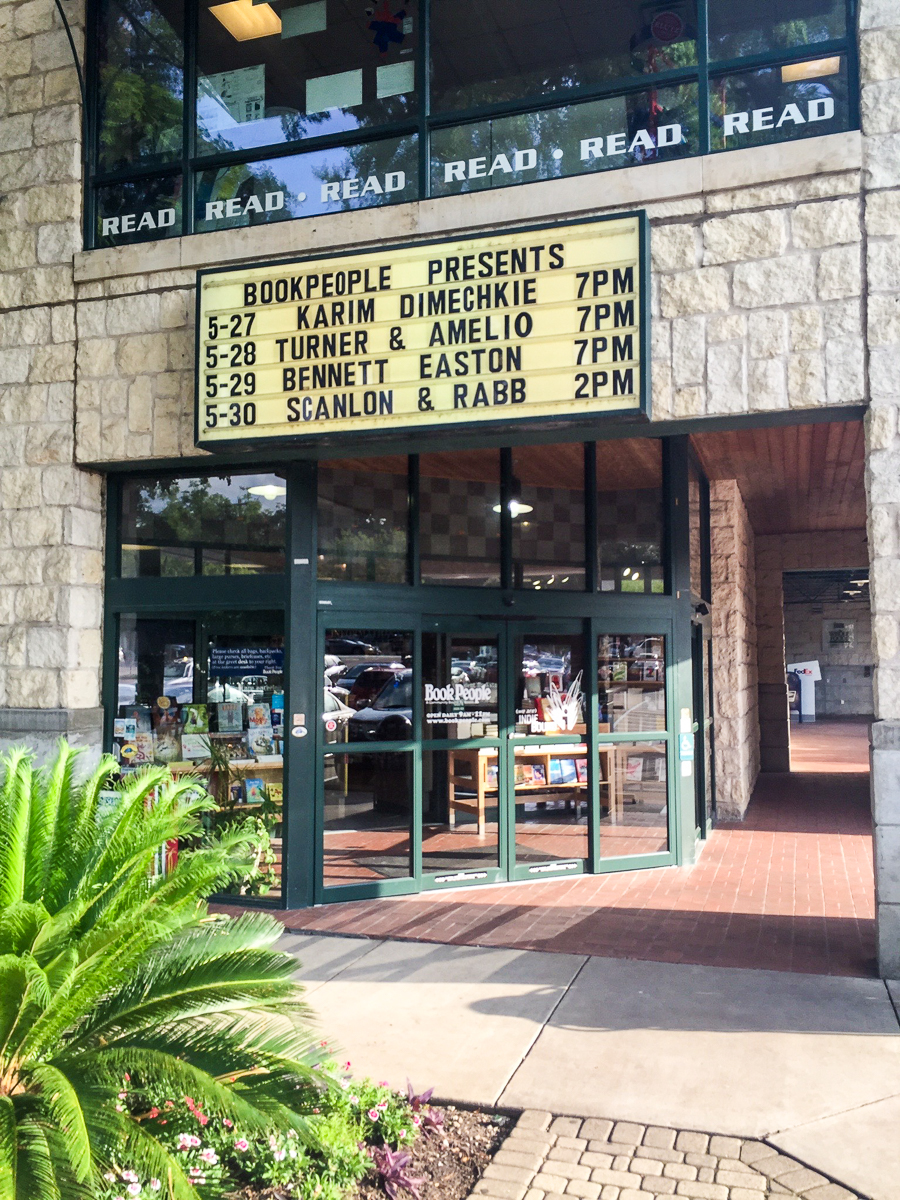 There was also a pretty sweet welcome, once I came into the store. 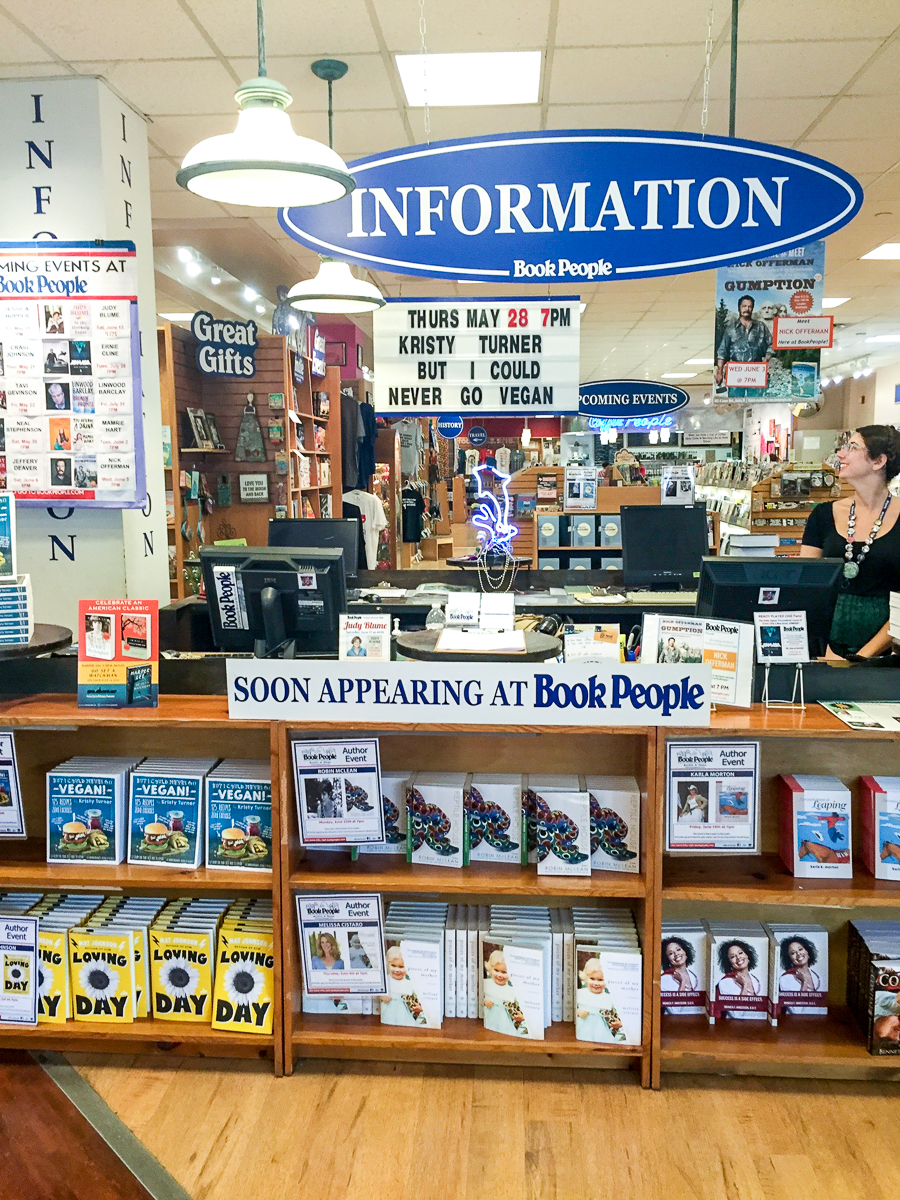 BookPeople is one of those bookstores that book lovers can go and spend hours exploring. I actually wish we'd had the time to do just that, but I would've ended up with way too many books to pack in my suitcase. It's a beautiful store and the people who work there are really wonderful as well. For the event, one of the employees, Salvador, interviewed me in front of the audience, and we talked mostly about transitioning to veganism- what inspired me and how I made the change. 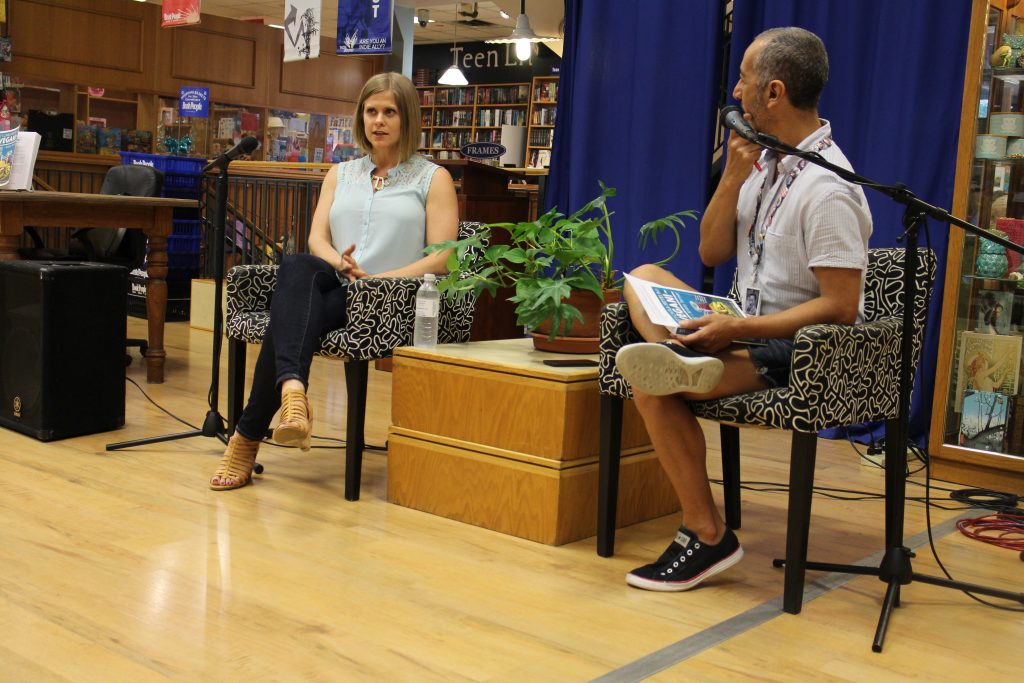 Afterwards, the audience asked a lot of questions, and then I got to spend time signing books and meeting people (my favorite part). 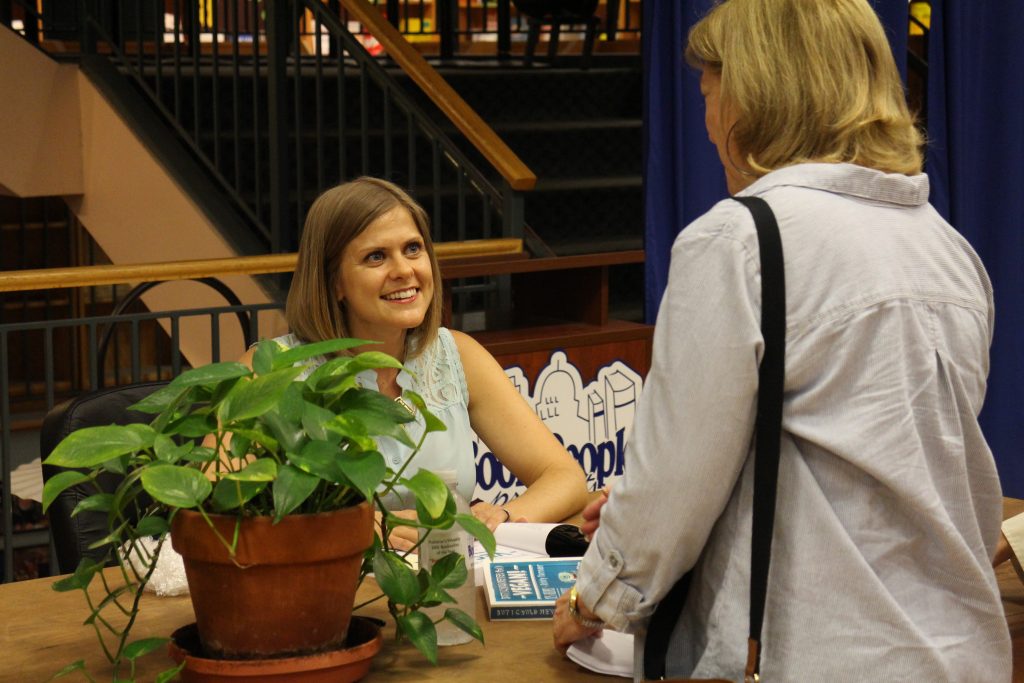 There was such a great turn-out and I got to meet so many of you wonderful people! I can't tell you how much it warmed my heart! I was on cloud 9 for the rest of the night. Thank you so much for coming!

For more Vegan Austin Adventures, join me on Part 2 of the series, coming up next week!