Chris and I arrived in Portland at around 2:45pm on the Thursday before Vida Vegan Con was going to start.  We knew we had to rent a car, check in to our hotel and high-tail it on over to the White Owl Social Club where an unofficial VVC meet & greet was beginning at 3:30.  We’d had a late breakfast and packed some snacks for the plane, thinking we would be fine until we were able to have dinner.  By the time we got our car and got into town, however, we were famished.

Luckily, the White Owl Social Club has a great selection of vegan eats.  We walked into the bar, and even though I saw faces I recognized from the vegan blog world (and wanted to meet), I couldn’t focus on anything but eating.  We ordered, got our number and while looking for a place to sit down, we ran into Jackie (whom we had met before) and Erin with her husband, Jeff.  I was so excited to see them but I was so hungry at that point, I honestly don’t remember what I said to them.  Shortly thereafter, we were joined by Cadry (who I had met on her recent trip to Los Angeles) and her husband David.  The two of them joined us at a table outside to while we waited for our food.  We had ordered the BBQ jackfruit sliders but I was so out of it and having so much fun talking with Cadry and David, I didn’t even think to photograph them (the sliders or Cadry and David).  I do remember that they were pretty great, though (both the sliders and Cadry and David).

The four of us sat there talking for a good long while and were eventually joined by Erin and Jeff.  The six of us were having such a great time, we didn’t even realize that the meet & greet had ended and everybody had left.  We ended up all going out to dinner together at Blossoming Lotus.  I mean, it was a vegan triple-date- how often does that happen?  And it was with two of my most favorite bloggers and their husbands!  I had to keep pinching myself. 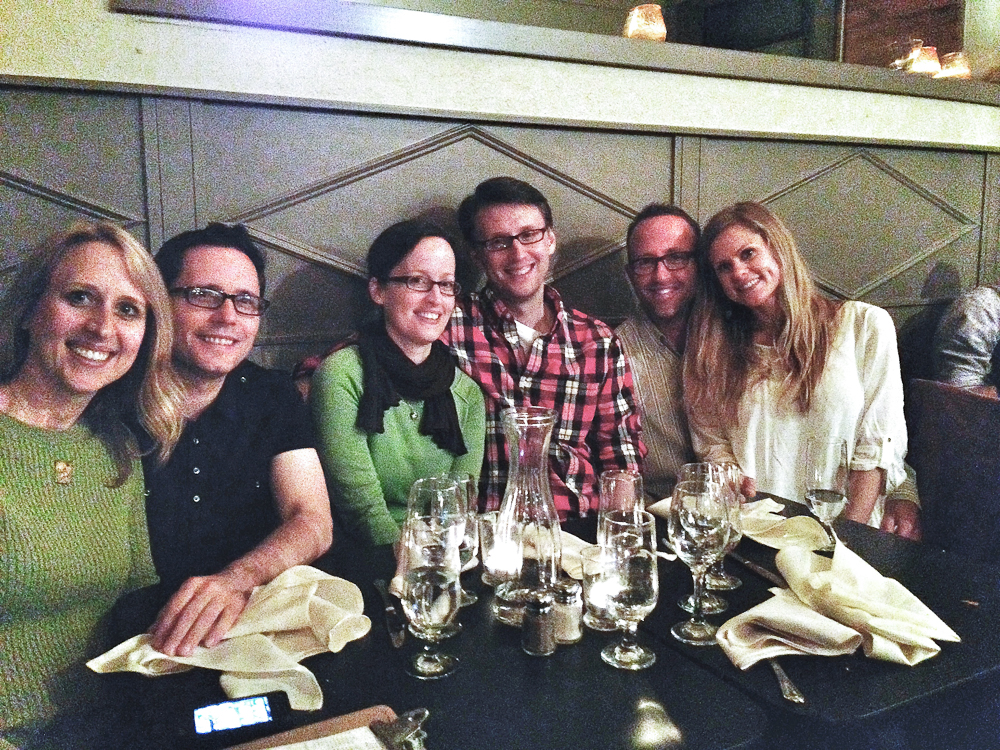 There was a little bit of a wait since we were such a large group and didn’t have a reservation.  Once we were seated, we shared the cheese plate and the assorted pickles plate as appetizers.  I wish I could tell you more about these dishes, but I was too busy chatting to hear the waitress.  I do know that the cheese plate had a type of cashew brie and the pickled plate had pickled beets, rhubarb, ginger and kim chee. 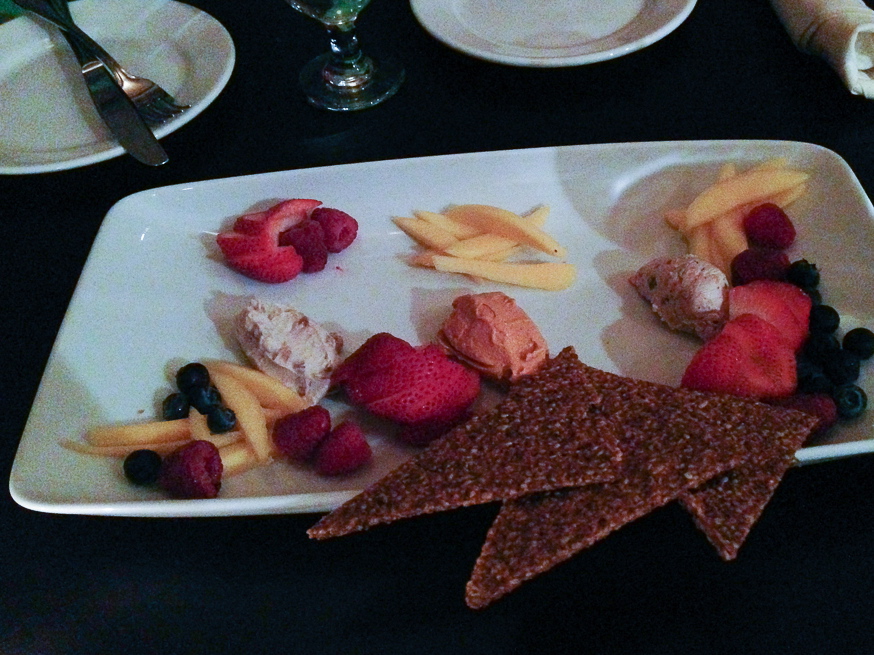 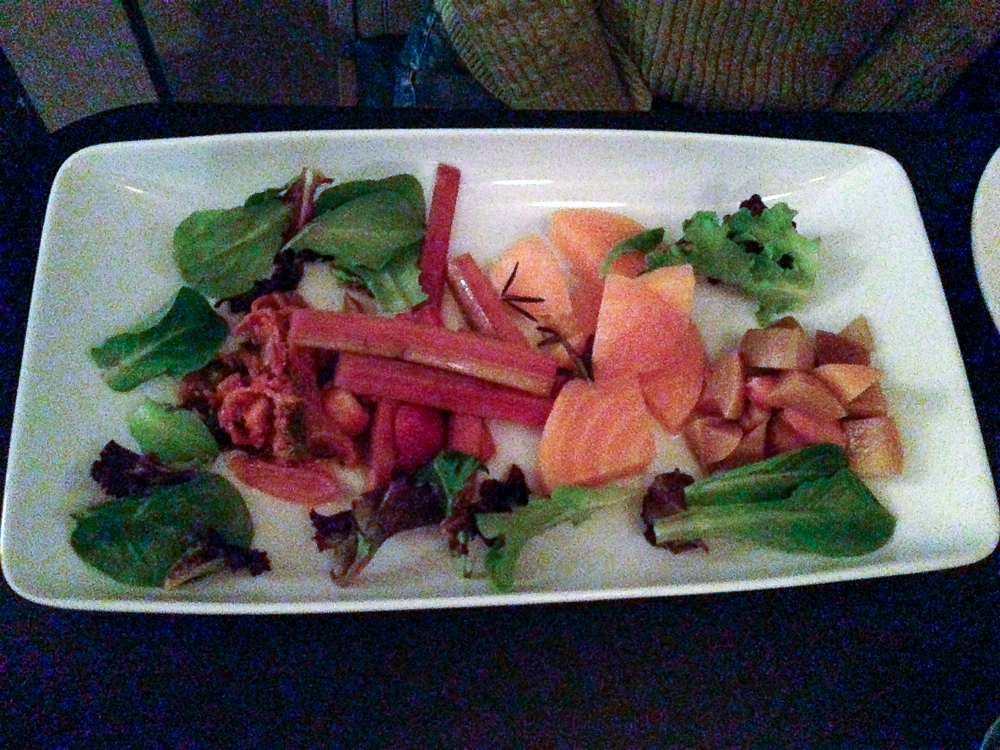 For my entree, I had the Chana Masala which came topped with roasted cauliflower, which I love, steamed kale and chunks of potatoes mixed in. 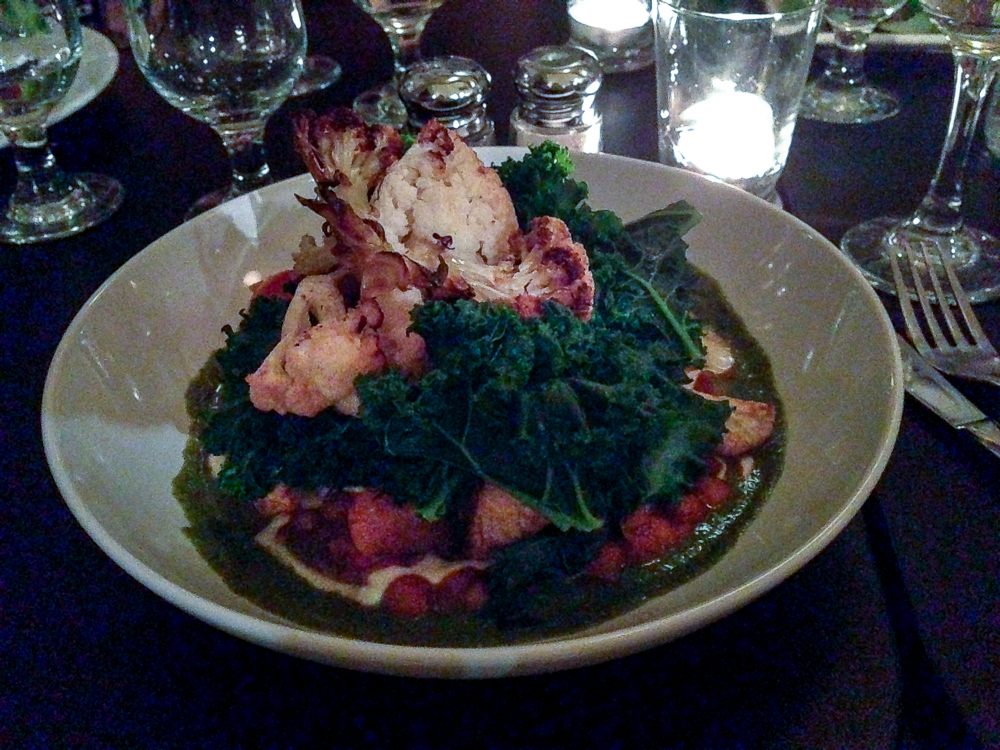 I really enjoyed my dish, but not as much as Chris loved his entree.  He ordered the BBQ Soul Plate (it was named something like that, but again, I don’t remember).  I’ve mentioned before that Chris tends to swear a lot when he really likes something.  It’s something that I find humorous and cute and I certainly hope our guests thought so too because he amazed us all with his selection of obscenities.  He was particularly taken with the cornbread and the BBQ soy curls. 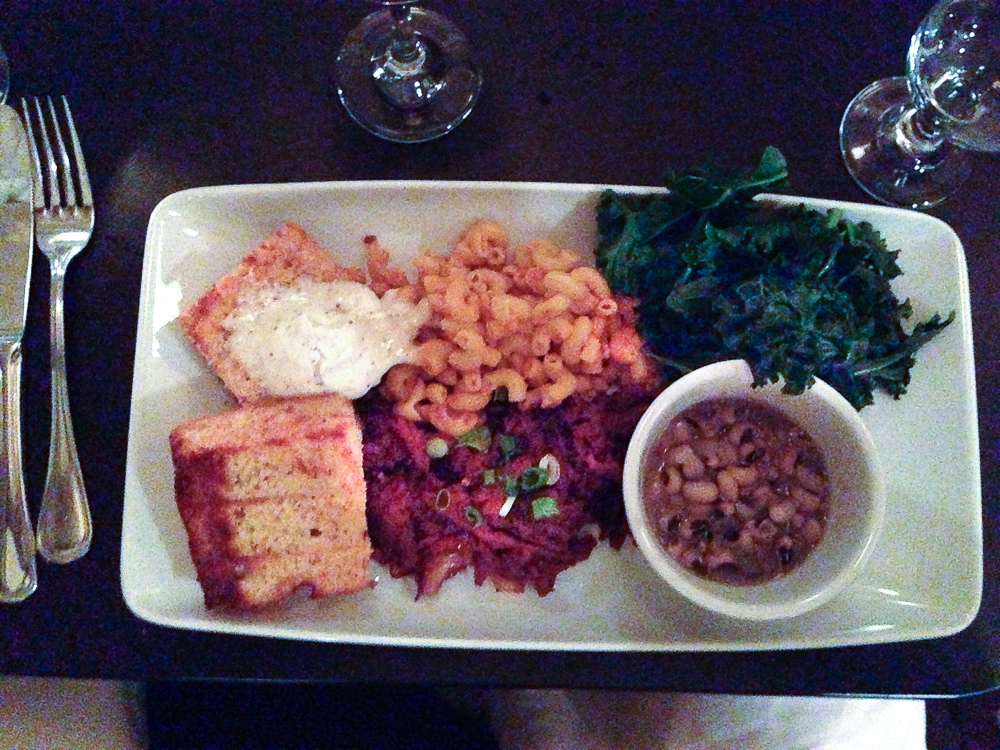 None of us had room for dessert, so we parted ways after our meal so we could get a good night’s rest before the first day of VVC.  The next morning, we decided to get a late brunch before heading to the convention.  We checked Yelp to find the closest place, within walking distance of the museum and our hotel, that served a vegan breakfast.  A restaurant called “Food for Thought” showed up and their tofu scrambles and vegan pastries seemed to get good reviews so we headed over.  When we got to the address, we were standing in front of Portland University’s student union.  Not wanting to try and hunt down another breakfast spot, we ventured in to see what we could find.  Sure enough, in the basement of the student union was a little student restaurant, with lots of large tables occupied by studying college students.  We didn’t care, though.  We were hungry and didn’t have time to find another place. 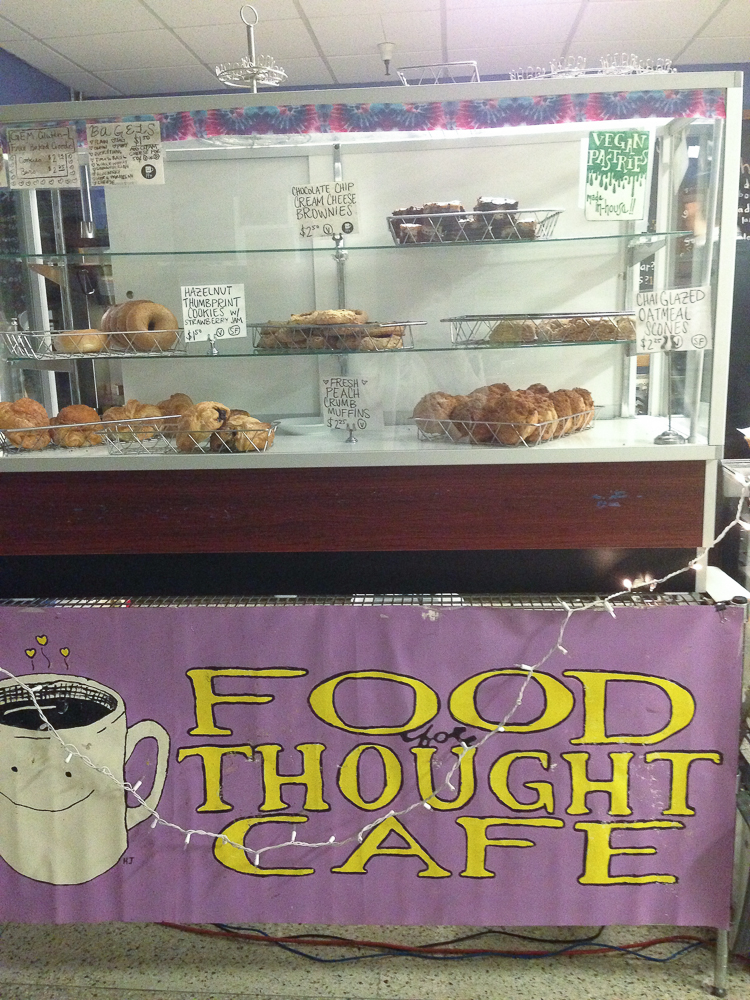 We ordered a chai-glazed oatmeal scone to munch on until our meals were ready.  It was pretty great. 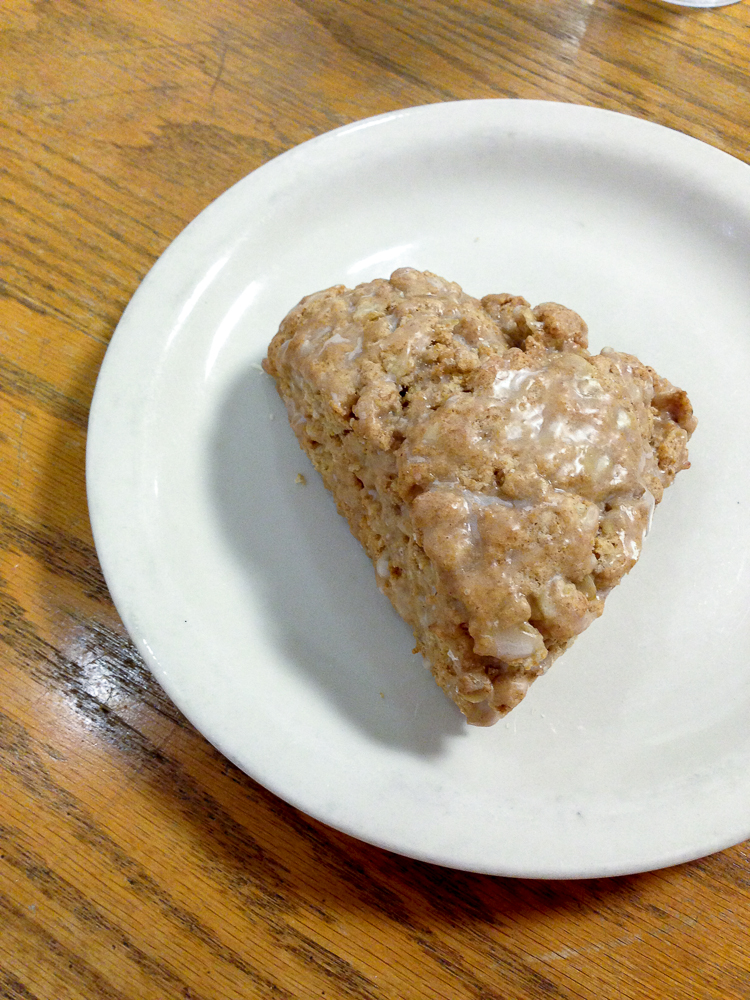 We each ordered tofu scrambles with a side of potatoes, and I have to say, they were pretty darn good.  They even had Sriracha sauce (found after the picture was taken) so I was able to make them even better. 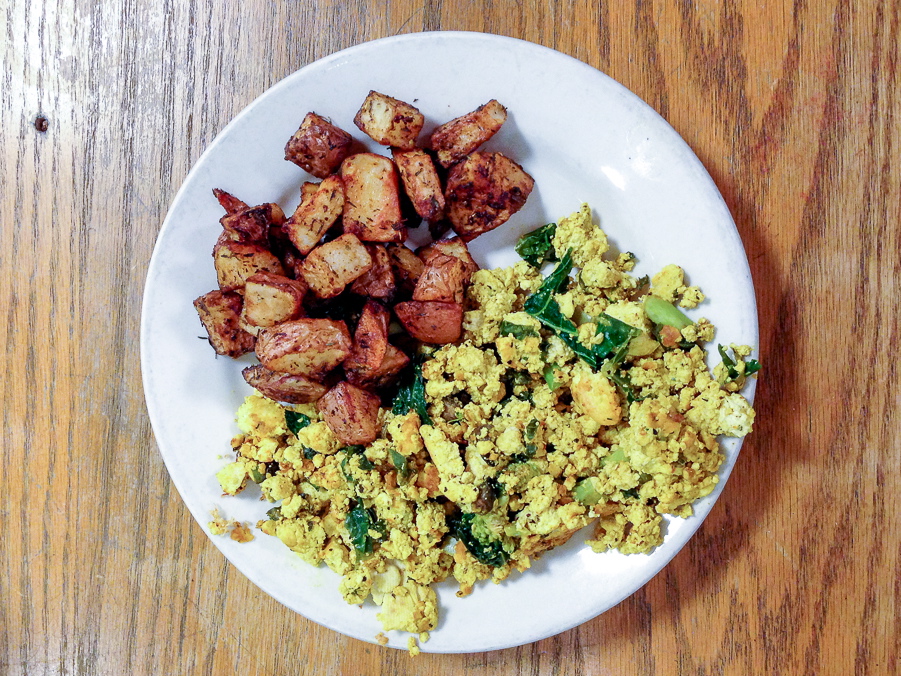 So we had breakfast with the college students of Portland before heading off to VVC.  I don’t know if I would go again, but it was a pretty tasty and inexpensive meal.  On second thought, I would totally go back to try more of their vegan pastries.  That scone was awesome.  Anywho, following our first day of classes at VVC, there was a little pop-up party at the vegan strip-mall.  This was one of the places I had on my list of places to visit in Portland, so even though we had dinner reservations and wouldn’t be eating, I still wanted to check it out. 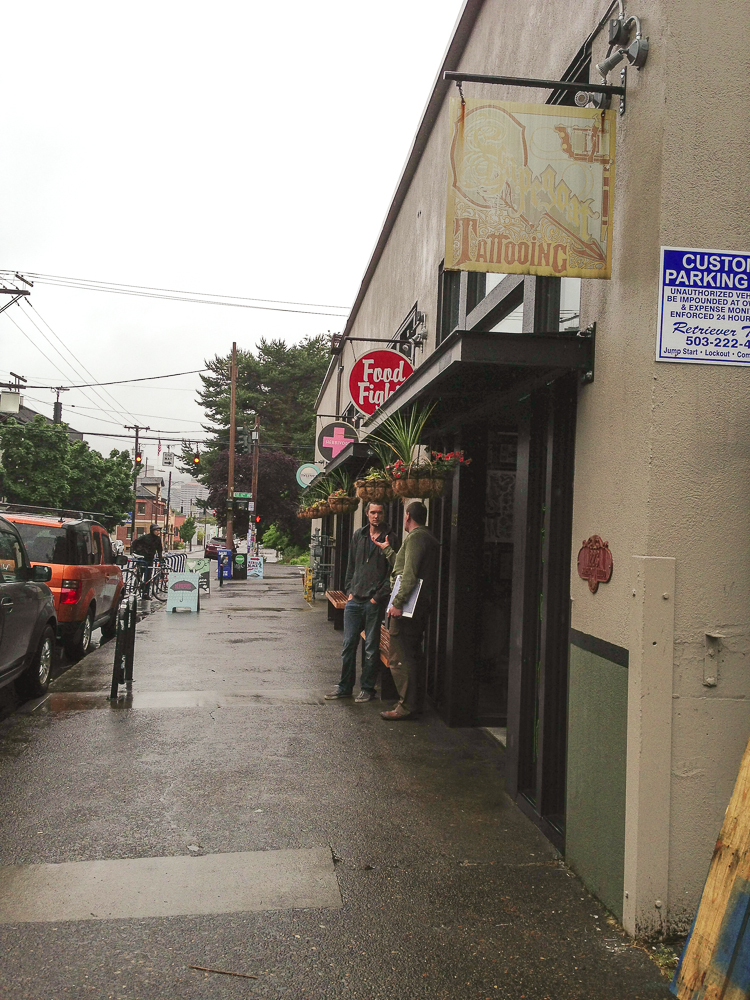 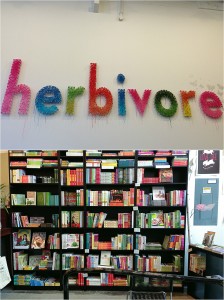 Food Fight, the vegan grocery store, was packed with people trying to get their seitan tacos, so we didn’t really venture in.  We did go into Herbivore, though, and check out their goods.  Chris bought a wallet and I bought Beg, the new book by Rory Freedman.  We also shared a vegan s’more made with Dandies and Grateful Grahams (not pictured, but trust me, it was daaaayum good).  We figured that VVC only comes once a year so dessert before dinner would be totally acceptable.  Before long, we needed to head to our dinner reservation, so we vowed to come back before we left Portland.

I had made dinner reservations at Portobello about three weeks earlier because I knew that one of the most popular, fine-dining vegan restaurant in Portland would be pretty packed during the same weekend as a vegan bloggers convention.  I was totally right, because as we got there, we ran into another group of bloggers- Angela, Hannah, Nicole, and Lisa.  Once we were seated, who should I see at the next table but Gena, Ginny, and JL and her husband!  Seriously, when does this ever happen? 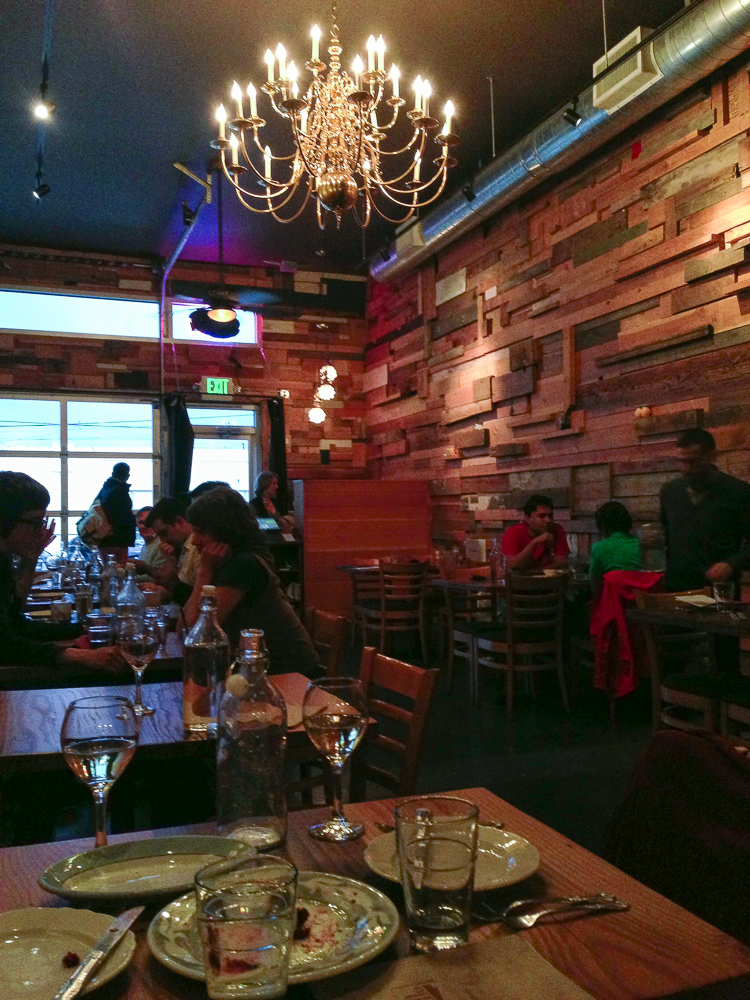 Chris and I ordered the Beet Tartare as our appetizer and were very impressed.  The creaminess of the cashew cheese was just amazing! 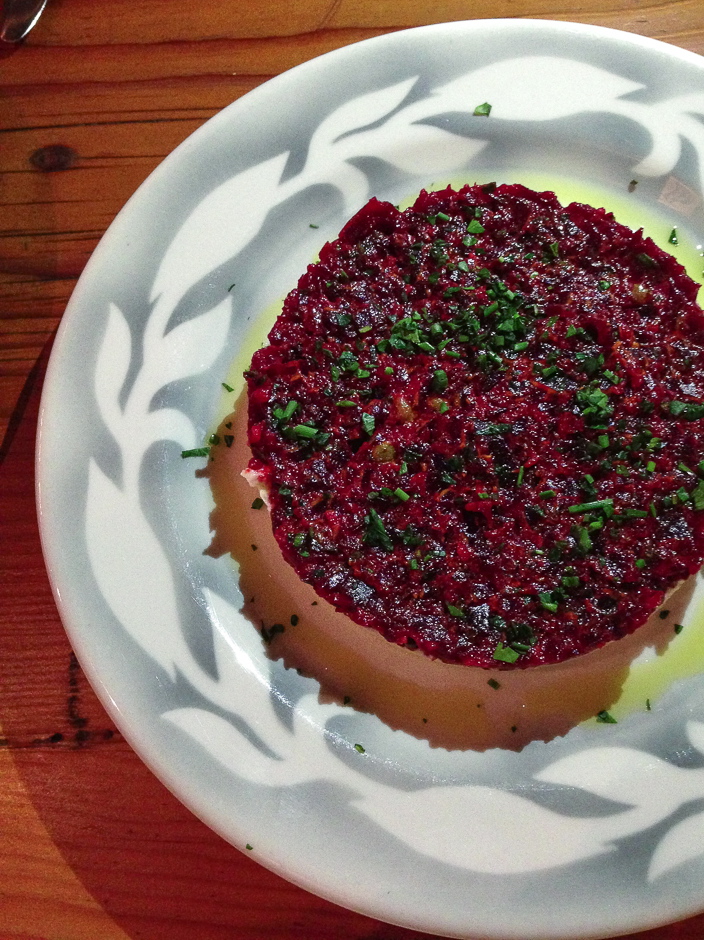 Cadry had warned us that the potato pizza looked pretty great, but I decided to order the cauliflower steak with roasted fennel and chickpea panissa and topped with a green chimichurri sauce.  Sure enough, the table next to ours ordered the potato pizza and Chris and I both gazed longingly at it while we waited for our meals.  My dish did not disappoint, though, and ever since, I’ve been trying to figure out how to replicate that panissa. 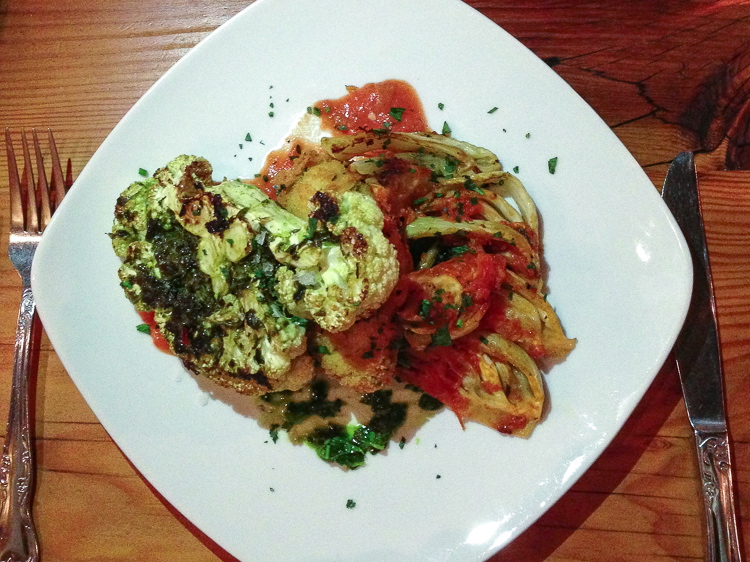 Chris ordered the Portobello Roast which came with very thinly sliced portobello with sun-dried tomato polenta, greens and a garlicky cashew cream.  He really loved his meal as well. 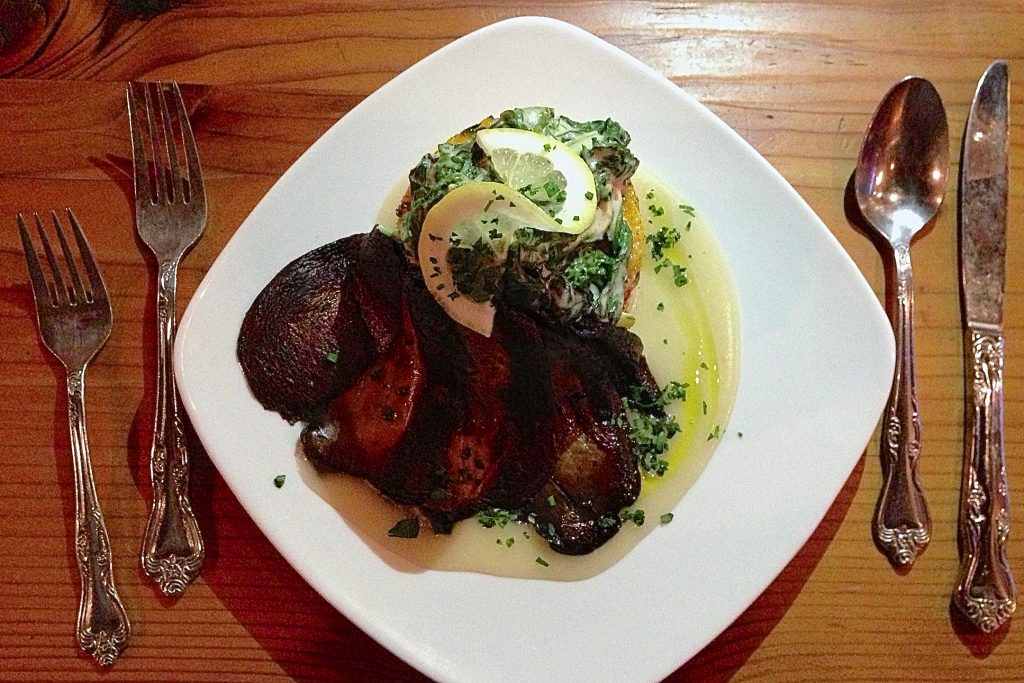 For dessert, seeing as how we’d already had a s’more, we decided to keep it light and just order a bit of ice cream to share.  We got a scoop of salted caramel and a scoop of chocolate.  Both were pretty wonderful but the salted caramel was just incredible.  I wanted a big ol’ bowl of it, but I refrained (mostly because that wasn’t even an option on the menu, but also because I was trying to be lady-like). 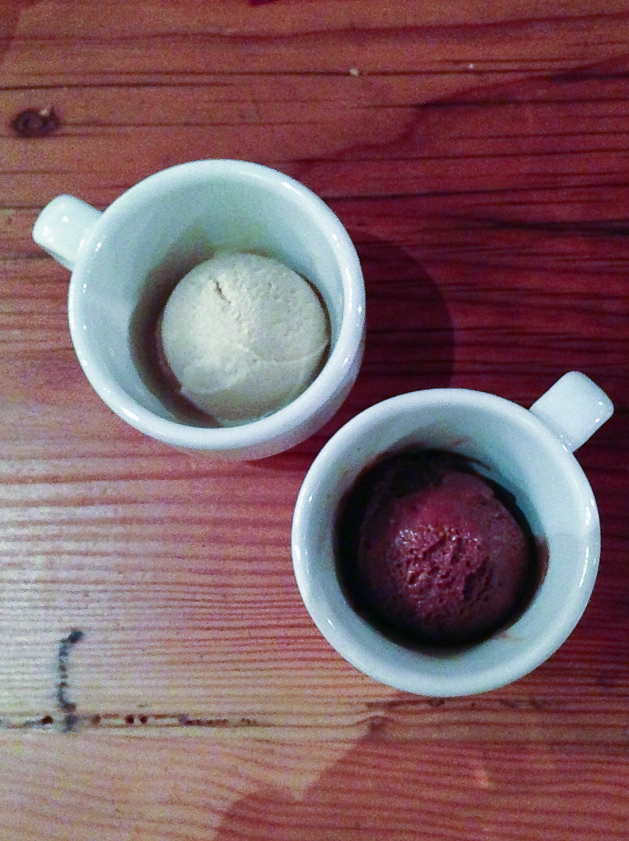 Just after a day and a half, we were pretty impressed with the vegan dining scene in Portland.  Little did we know that it was about to get even better…

Join me next week for Part 2 of our vegan travel in Portland.