This is part 2 of our vegan travel in Portland series.  Be sure to check out Part 1 as well!

Our third day in Portland began with a Vegan Breakfast Showcase from various Portland eateries.  As I said before, we were well fed.  For lunch there was a build-your-own bowl buffet, so by the end of the day, we had eaten quite a bit.  We had a couple hours to get ready for the Gala, so we decided to get fancied up and grab a quick yet light dinner. 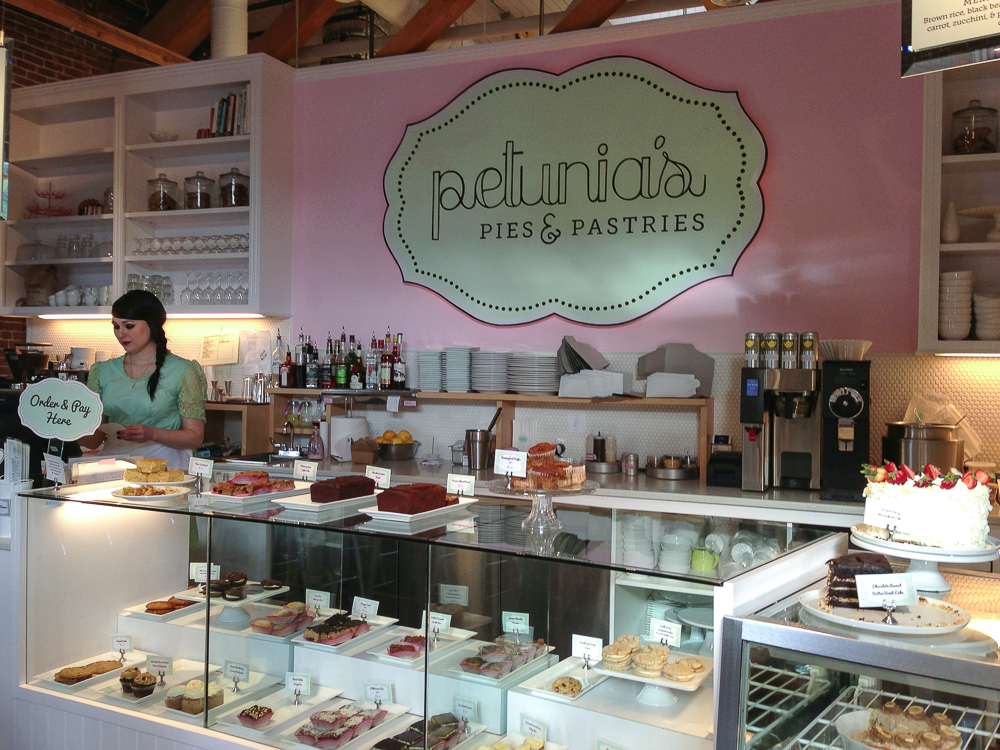 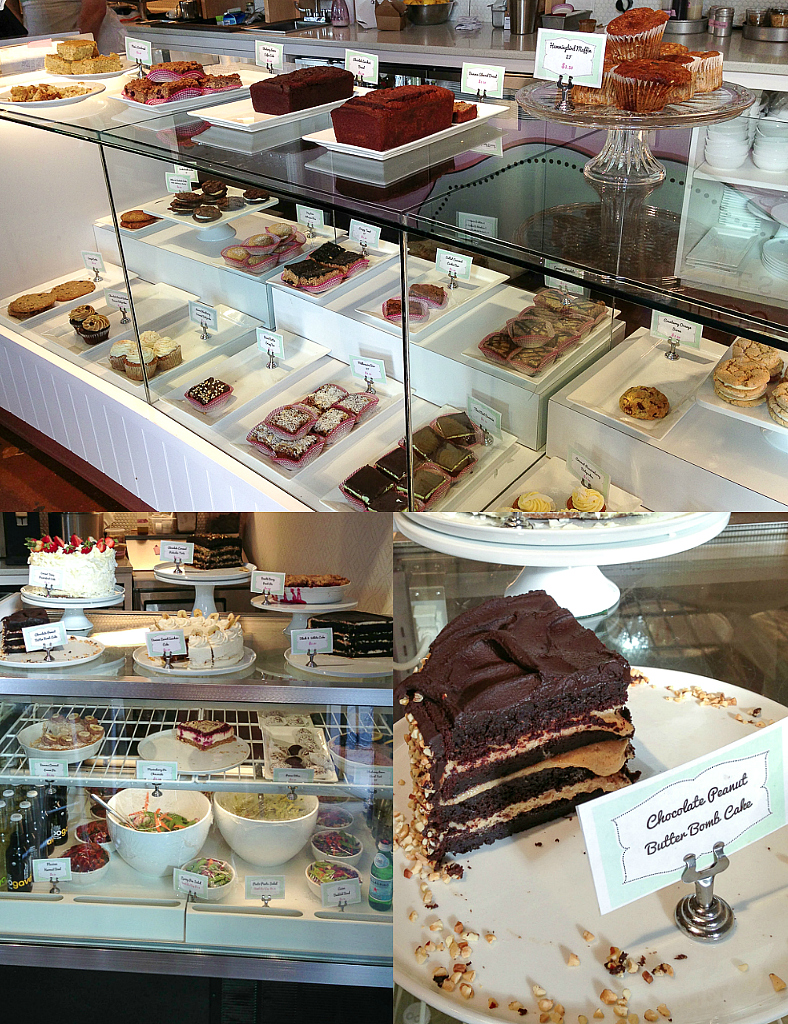 We settled on Petunia’s Pies & Pastries because it was on the way to Staver Locomotive, where the Gala was to be held.  Judging by the title, this may sound like an odd place to go for dinner.  As its name describes, Petunia’s does serve a large variety of vegan and gluten-free baked goods.  They also have a pretty decent cocktail menu as well, though we only had water.   With desserts and cocktails, I imagine this would be a fantastic place for a date or girl’s night out.  They also have a small lunch/dinner menu which is what we came for. 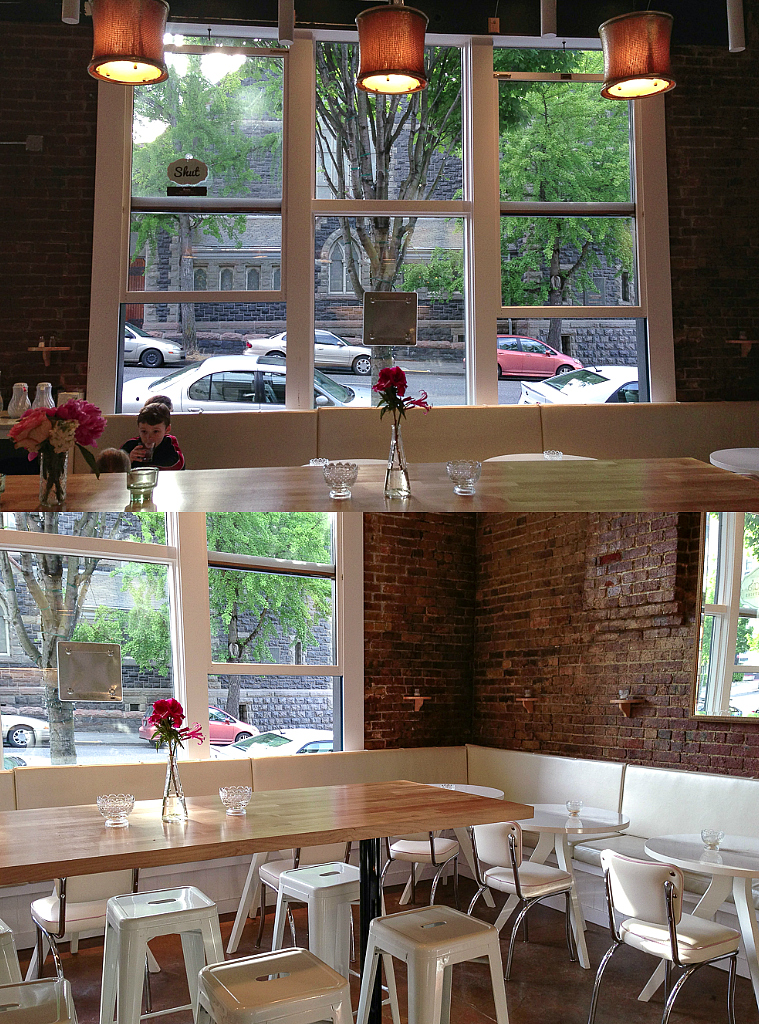 I chose the Spring Pea Salad bowl which was filled with greens, sugar snap peas, radish slices, carrot ribbons, mint and a tofu feta.  It was light and refreshing and exactly what I needed. 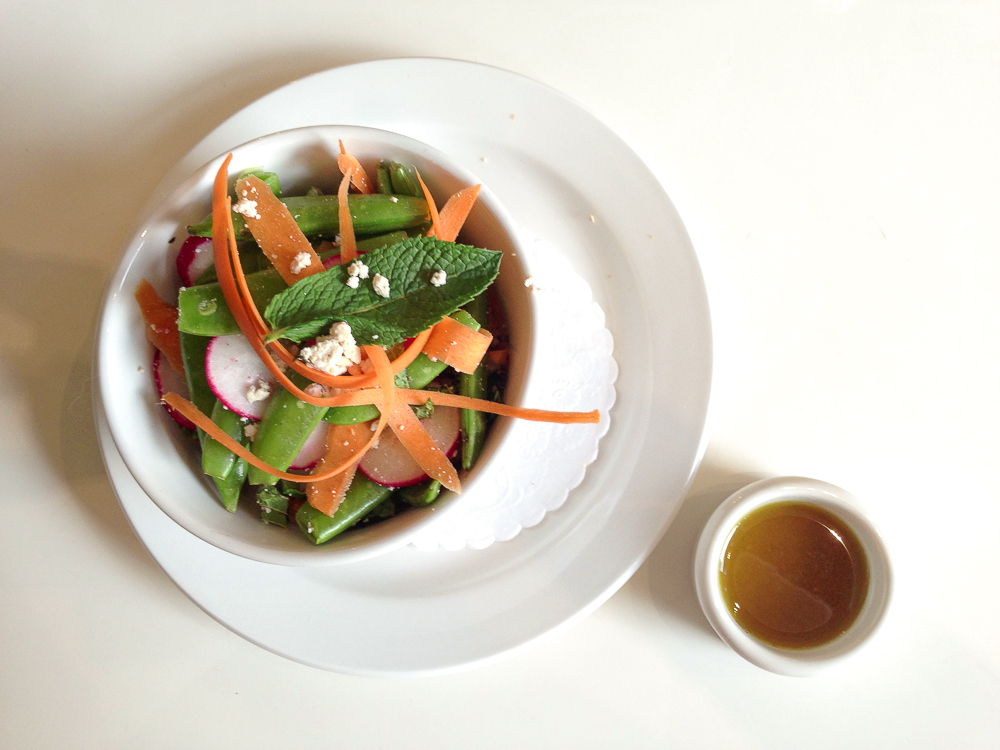 Chris ordered the Tomato, Basil & Mozzarella Flatbread.  It was just as the title describes and though it doesn’t look that enticing, it was pretty delicious, and for a gluten-free flatbread, it was quite soft and moist.  What made it really great, though, was the drizzle of agave syrup that it sat upon- I never would’ve thought to add it, but it made this dish.  So good. 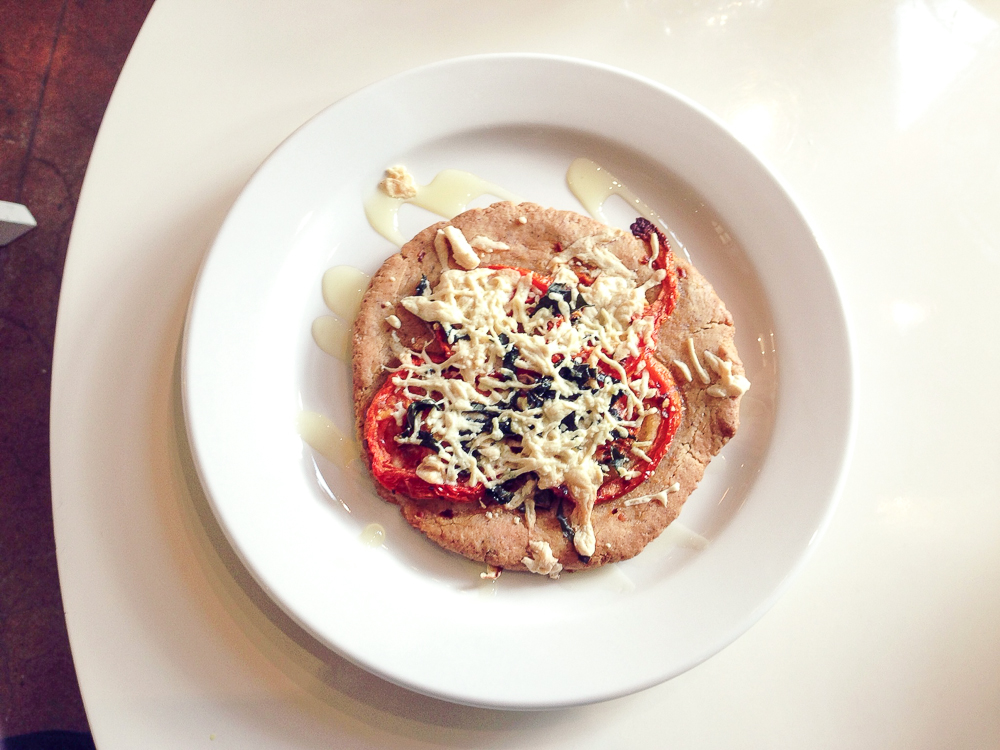 The Gala was a lot of fun, and of course, Chris and I got a little hungry towards the end so Chris got a chili dog from the vegan hot dog cart that was there.  He let me have a couple bites (that’s all I was hungry for) and it was great.  Unfortunately, I didn’t get a picture because, well, I’d had some wine and was not capable of remembering to do such things.

After the Gala, a bunch of us went to Suki’s Bar & Grill for karaoke.  Again, there are no pictures of this for the same reason I just mentioned, plus I was getting tired and didn’t have the energy to pull-out my camera (I’m ultra dramatic when I’m tired, FYI).  At one point, before we went to Suki’s, a vegan strip club was brought up as a potential after-party location.  Yes- a vegan strip club.  Next time we go to Portland, I’ll be sure to get lots of pictures of the food there so you all will know how it is.

The next day was the last day of VVC.  Chris and I were feeling like we just hadn’t gotten enough of Portland so we looked into extending our stay an extra day but it was going to be ridiculously expensive to do so.  Our only option was to soak in as much of Portland’s vegan goodness that evening and the following morning as we possibly could.  After we left VVC, we went back to the hotel, thinking we were going to nap, but instead walked about 20 minutes to VooDoo Doughnuts. 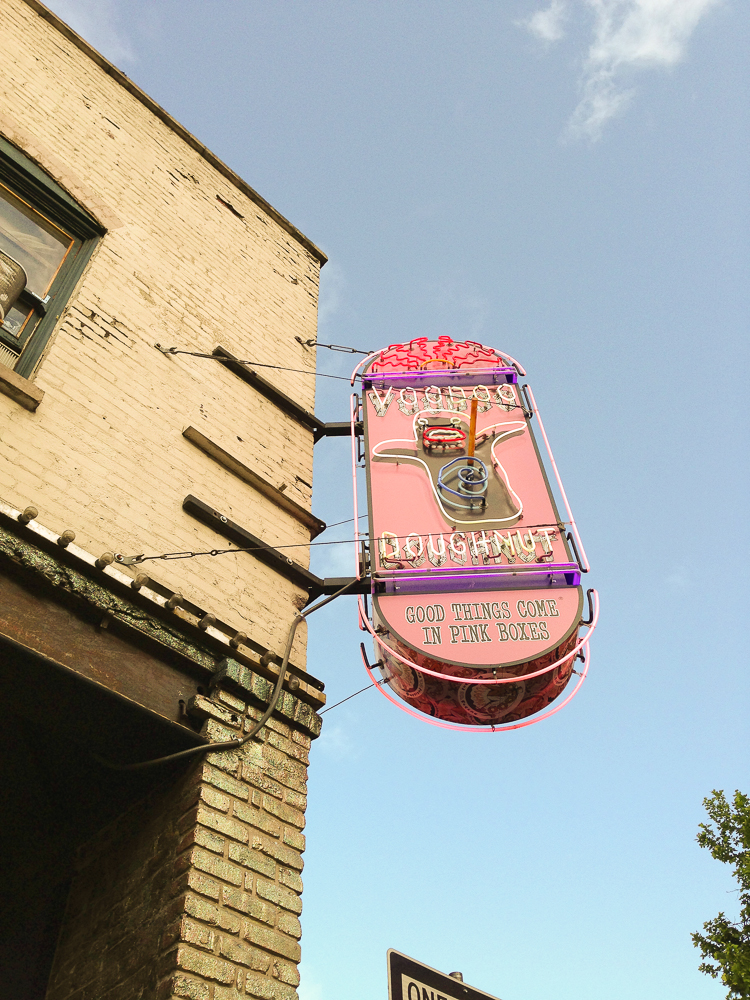 We had to wait in line for nearly an hour, but it was worth it to try out this Portland landmark.  We’d been seeing people with their pink VooDoo Doughnut boxes all weekend and hearing tales of the deliciousness of their vegan donuts.  I was afraid they wouldn’t be able to live up to the hype, but alas, they were even better!  We got the “Ol’ Dirty Bastard” (Oreo Peanut Butter), a vanilla grape donut (weird combo but surprisingly good.  We got it because I thought the purple icing was pretty), an old fashioned glazed, and a chocolate cake donut, covered in a cocoa puff-like cereal. 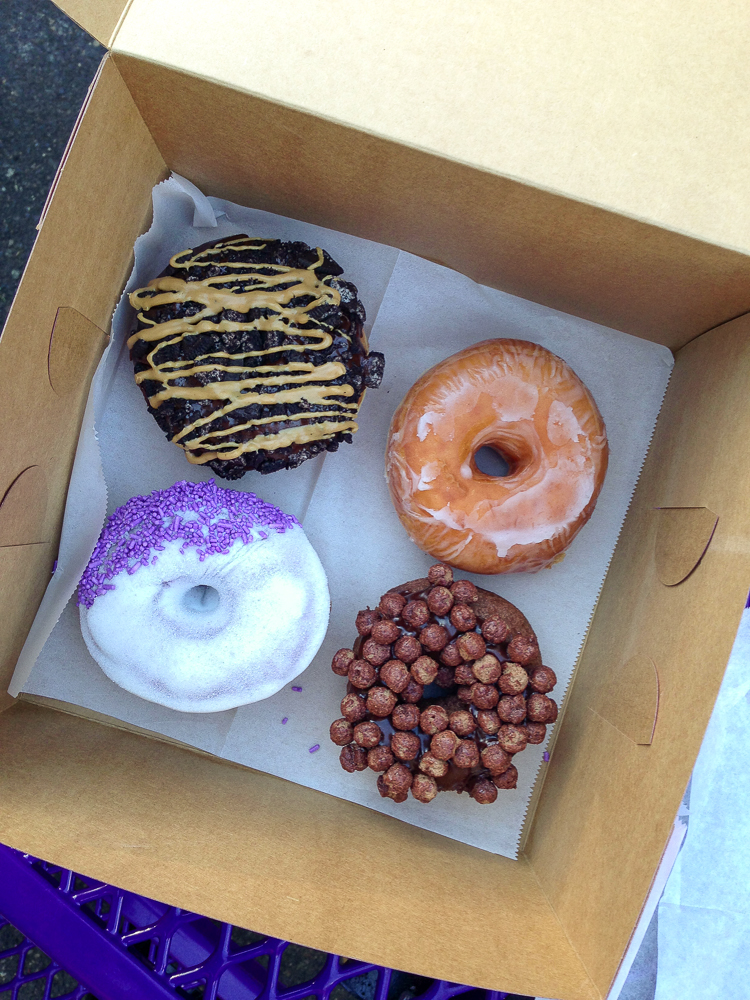 We started off with the Ol’ Dirty Bastard.  Ridiculous. 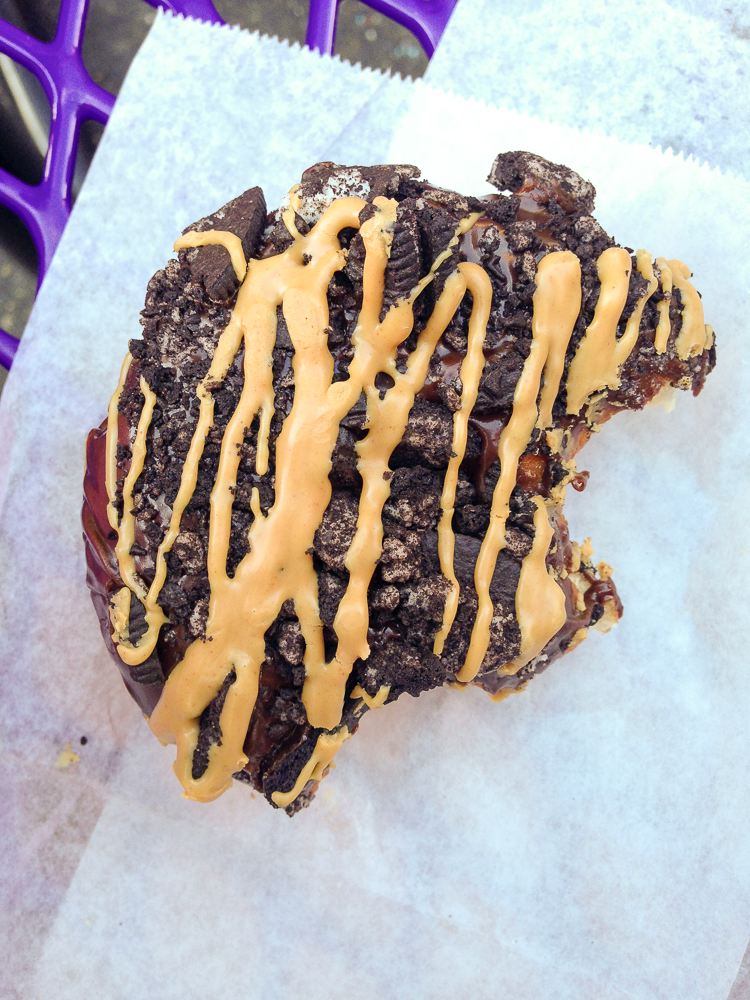 We were going to walk to Powell’s Book Store after that, but I could feel my blood sugar take a huge spike after that donut, then it’s rapid decline began to hit me.  I was going to need a solid meal soon because I have no control over my behavior when I’m hungry.  So we walked quickly back to the hotel, got in the car and went to find dinner. 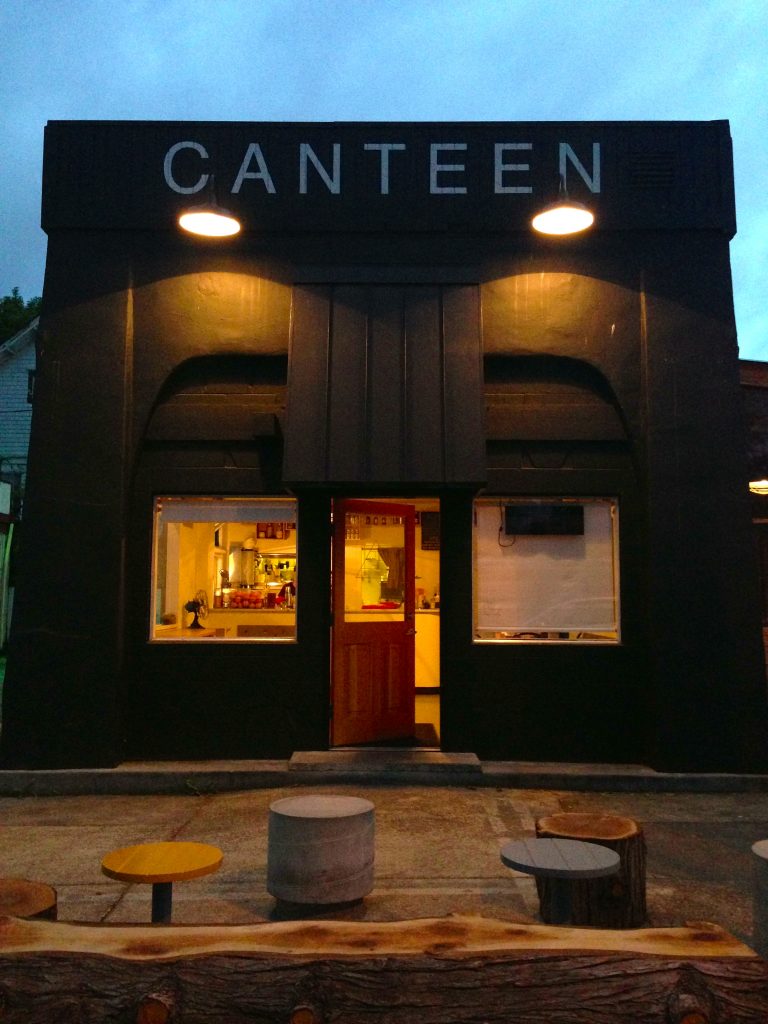 We’d also been hearing good things about Canteen all weekend, and since Homegrown Smoker was closed, we went there.  I was so glad we did, because this is what we saw upon pulling up. 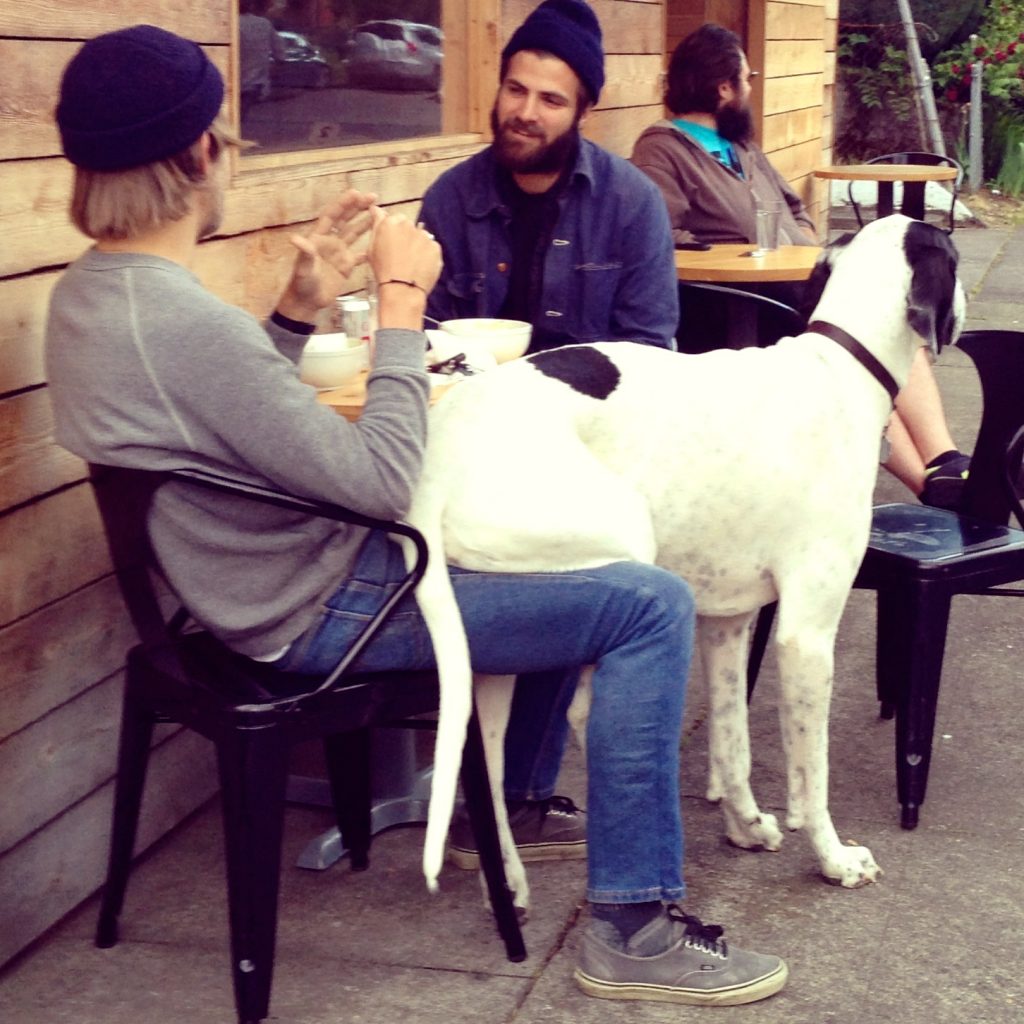 Adorable. I love Great Danes and I love it when animals do cute things so I took it as an omen that this was definitely the right spot for us.  All of the bowls on the menu sounded so good, but we both ended up getting the southern bowl so we could have one last serving of soy curls before heading home.  Along with the bbq soy curls, the bowl came with collard greens, black eyed peas, brown rice, and a carrot and cabbage slaw and topped with cashew ranch and green onions.  I can’t stress to you enough how good this bowl was.  I need it in my life all the time. 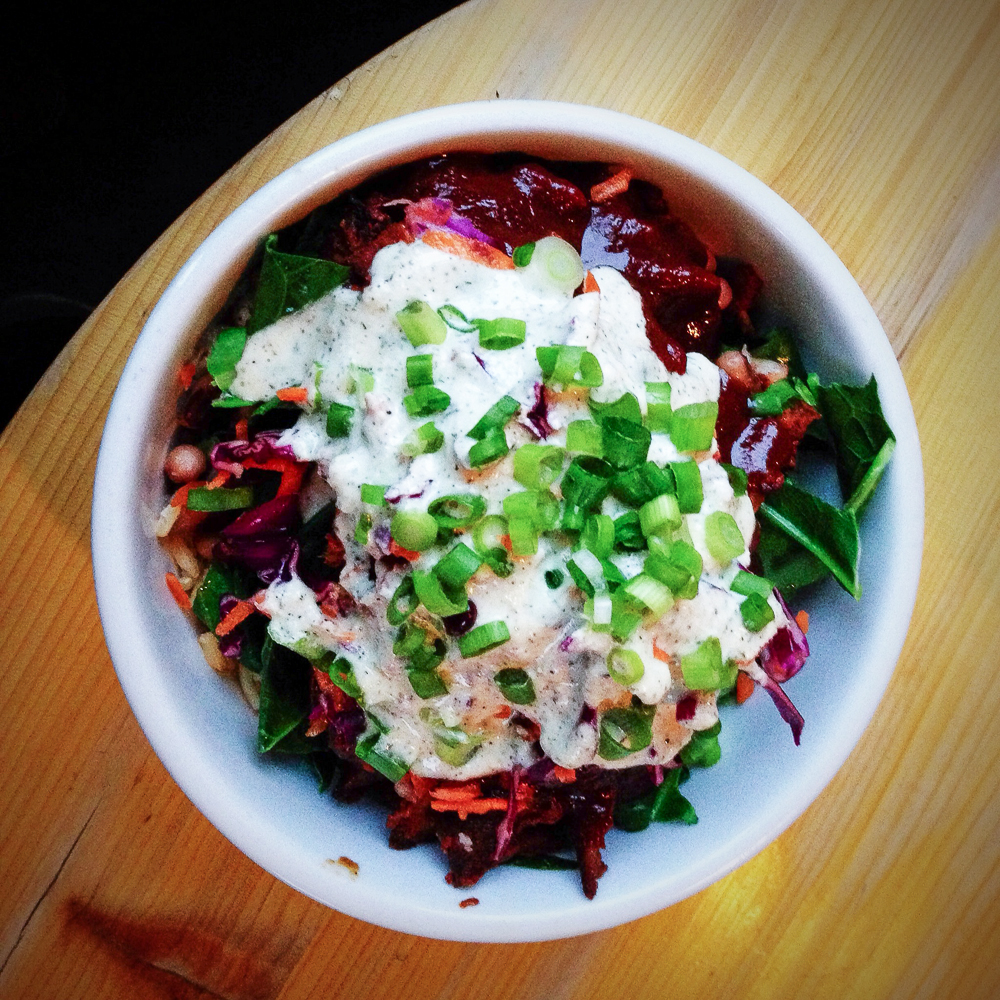 After dinner, we met up with Cadry and David for one last drink before going our separate ways.  We had such a blast hanging with them all weekend- truly one of the highlights of the whole trip.  We met up at The Sweet Hereafter and got a nice seat by the window.  The wine was great, the view was beautiful, the atmosphere was very mellow, and there couldn’t have been better company.  It was perfect. 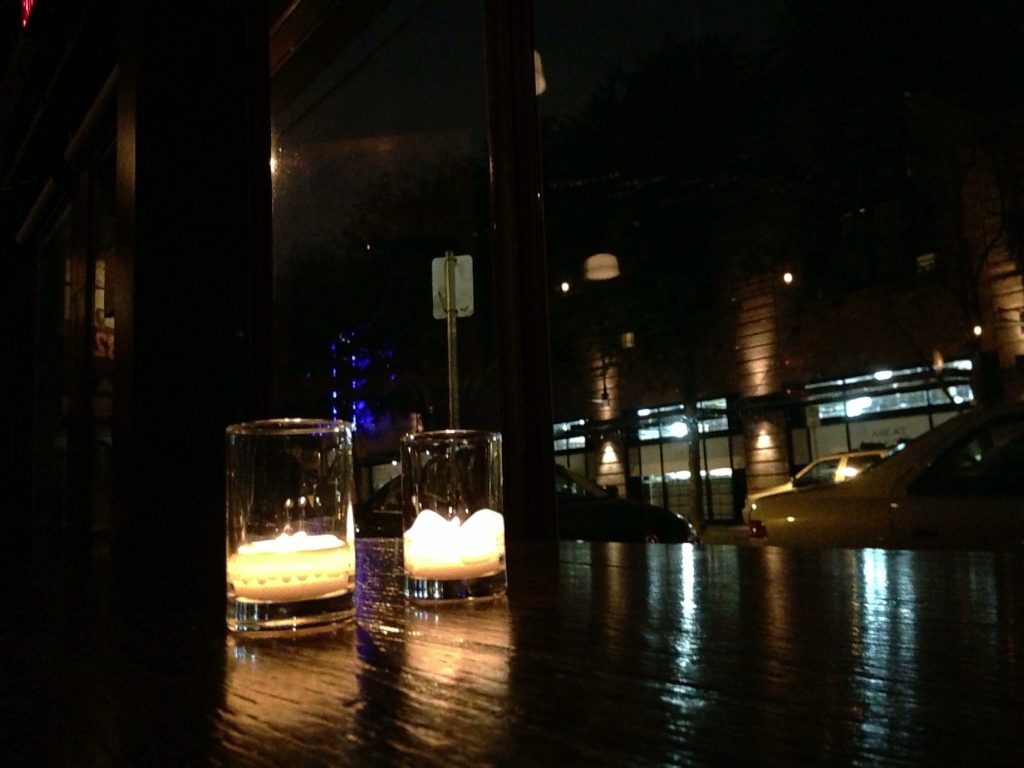 The next morning, we packed up, checked out, and had an early breakfast at Prasad.  This was another place we’d been hearing about all weekend, and this place too also lived up to the hype.  Chris got the Chipotle Tempeh Scramble which came with black beans, tempeh, spinach, sun-dried tomatoes, carrots, zucchini, topped with a green chili sauce and served with brown rice and toast.  Chris was quite pleased. 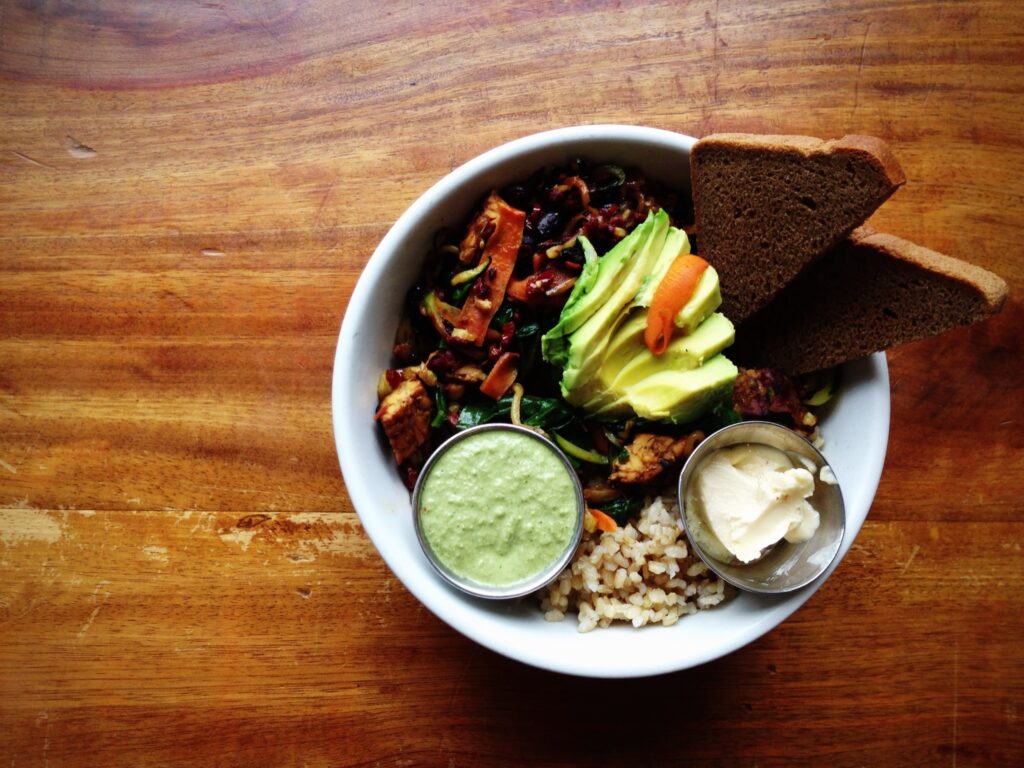 I ordered the Blustery Oats which came with walnuts, dried cherries, apples, strawberries (they gave me these instead of banana because I have a hard time digesting raw banana), vanilla and maple syrup.  It was the perfect breakfast for a blustery, rainy Portland morning. 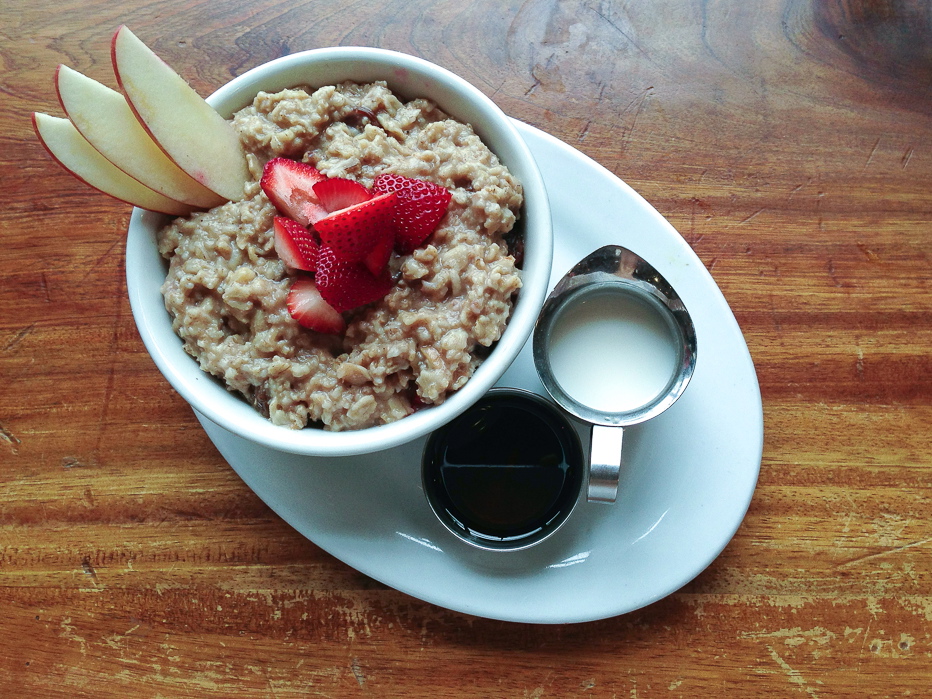 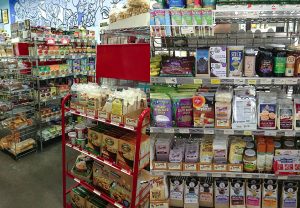 After breakfast, we made a bee-line back to the vegan strip-mall because Chris believed he left his sunglasses at Herbivore and we didn’t get a chance to check out Sweetpea Bakery and Food Fight the last time we were there (we also didn’t check out the vegan tattoo parlor, but we had no interest in getting tattoos).  Chris found his sunglasses and we were able to spend some time perusing Food Fight.  I stocked up on vegan razor blades and dog bones (tax-free, baby!) and also bought a couple of Cocomels because I’ve always wanted to try them.  They are definitely as good as everyone says they are- I wish I stocked up on these too! 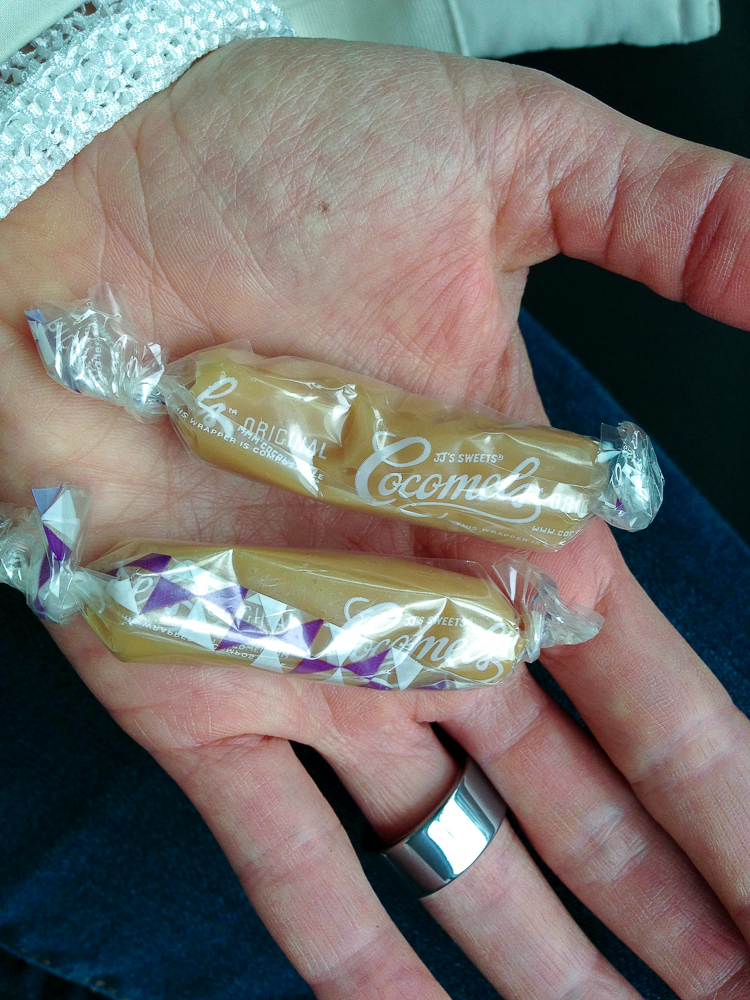 Lastly, we went to Sweetpea Bakery for some coffee (for Chris) and tea (for me) for our ride to the airport.  They had a beautiful selection of vegan baked goods and trust me- if I didn’t have a box of donuts in the car, I would’ve gotten one of those monster cookies to try! 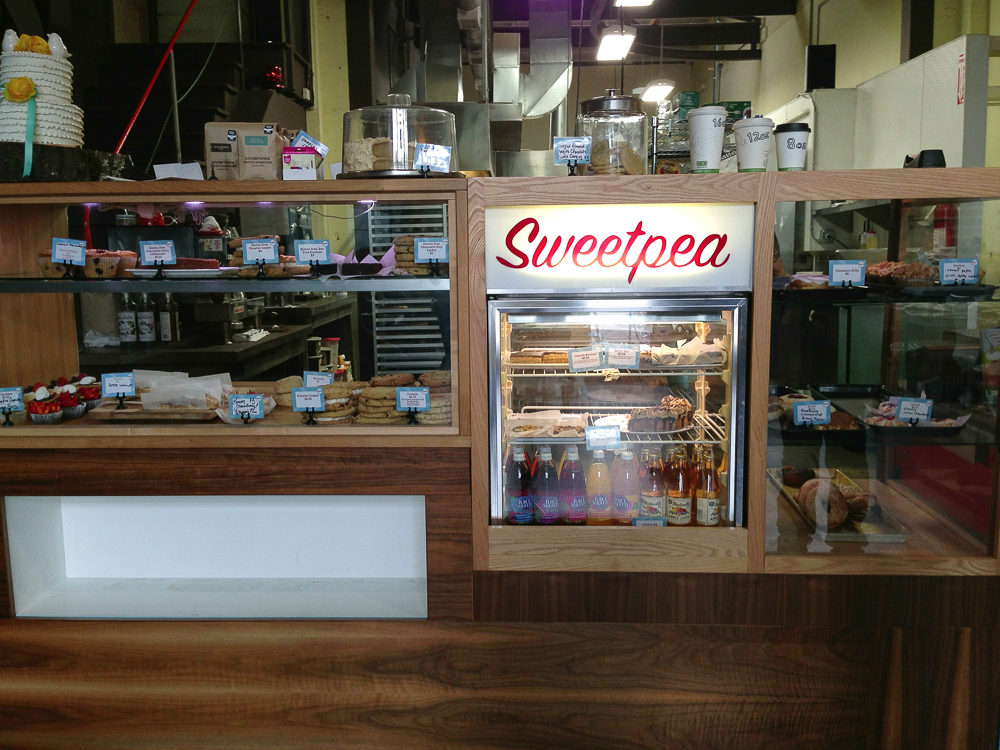 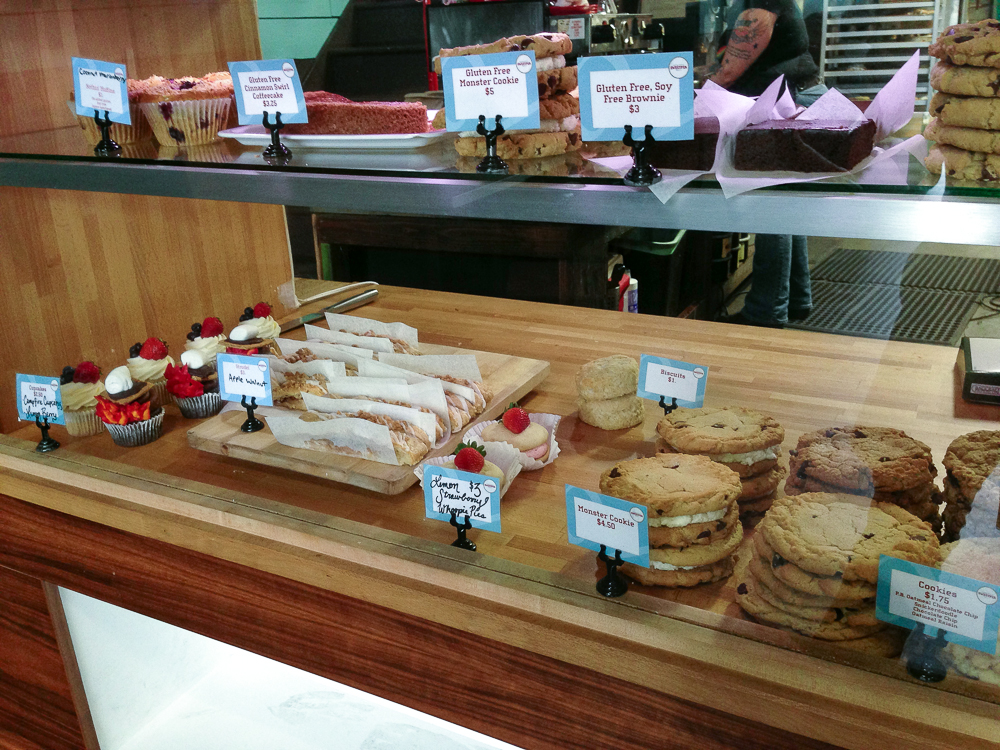 I feel like we barely scratched the surface when it comes to vegan dining in Portland.  We both feel like we need to go back because we weren’t done eating.  I’m not sure when, but be on the lookout for another installment of vegan travel in Portland sometime in the future.  We will definitely be going back some day (hopefully sooner rather than later)!