This is Part 2 in our series on vegan travel in Barcelona. If you’re just joining, be sure to check out Part 1 first!

Our second full day in Barcelona was on a Sunday. All shops are closed on Sundays in Barcelona and many restaurants, cafes, and bars close their doors on either Sunday or Monday (or they have reduced hours on one of those days). If you want to make plans on those days, be sure to always check ahead to make sure they’re open.

When we awoke that Sunday, the streets were empty and it was overcast and drizzly. If we lived there, we likely would’ve holed up in our home all day but since we only had a few days in this city, we decided to make the best of it. We got up, got dressed and walked to Gopal to have our cafe con leche and donuts.

The only problem was that Gopal was closed. Being that it was Sunday, they weren’t opening for another couple of hours. Since we were in George Orwell plaza, we decided to check out the vegetarian restaurant just two doors down that I had been to almost every time I’d ever been to Barcelona. 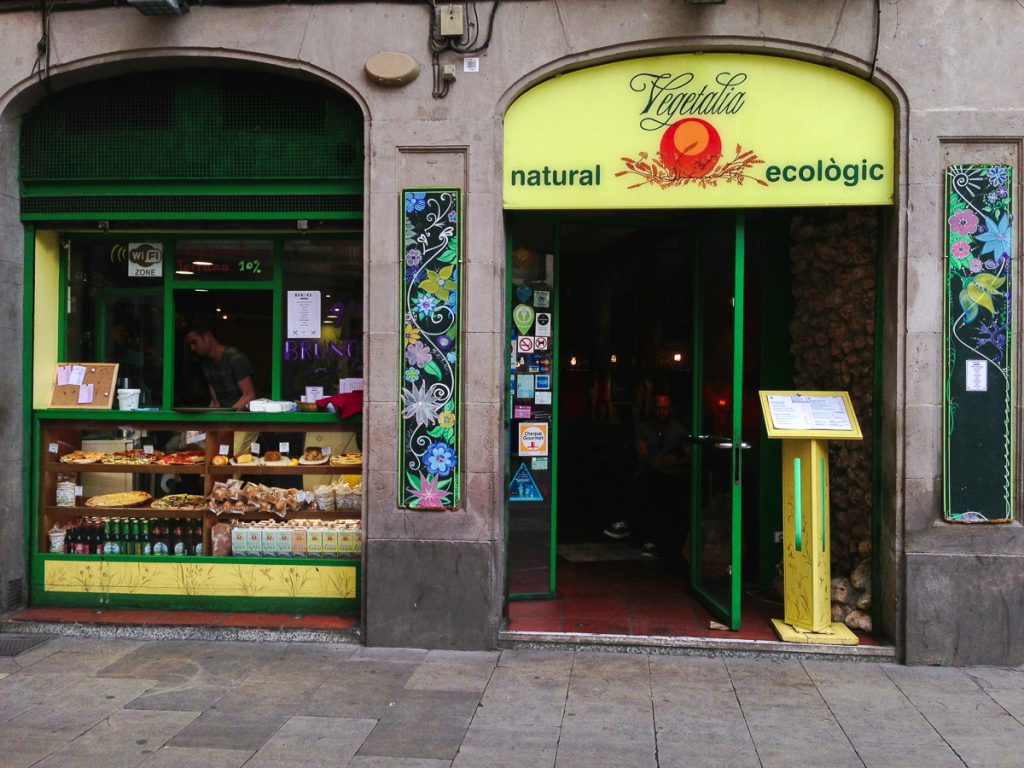 Vegetalia is a vegetarian restaurant that has some vegan options. They also have their own line of vegan milks (rice, soy, almond, etc.) and a number of their own vegan and vegetarian products that can be found in stores throughout the city.

When we walked in, the workers there seemed surprised to see us. I guess customers on a Sunday around noon is unusual. They immediately offered us the english menu (the fact that we were even there at that time probably told them we were not from around those parts) and we perused their breakfast options. There were directly vegan options but we asked if we could have just toast and jam (part of one menu item) and a breakfast pastry (in their dessert case at the bar) to go with our almond milk café con leches. They seemed confused at first but were more than willing to oblige. 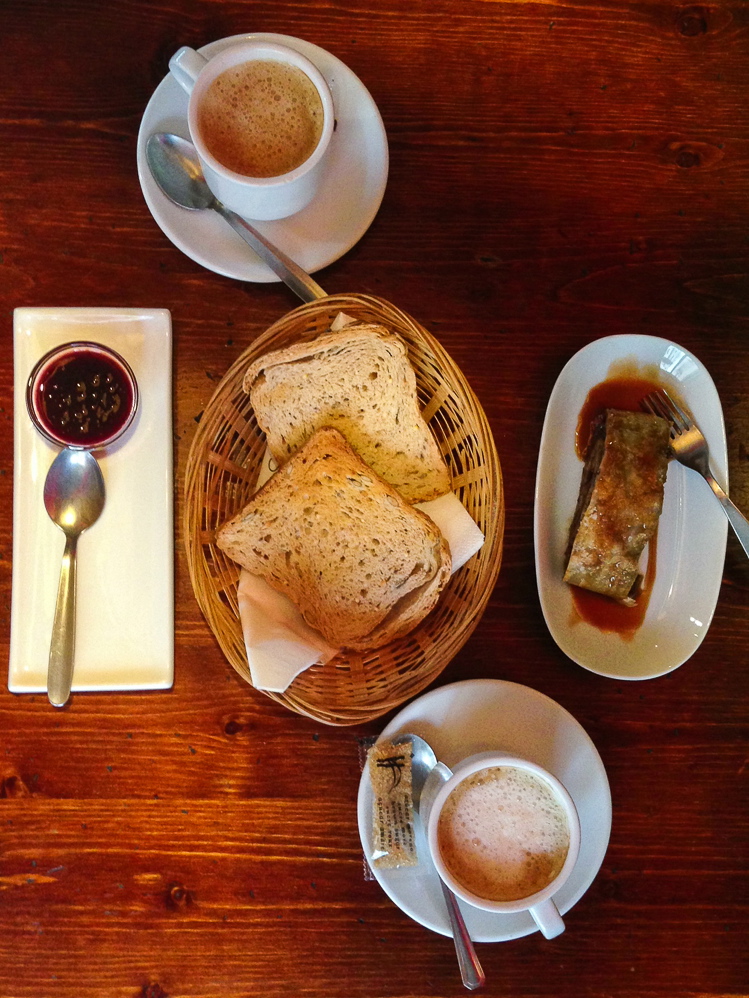 The pastry was a little on the sweet side for me but it was good nonetheless. The toast and jam was just that. There was nothing extraordinary about the meal, but it was good. When we finished eating, rain had just begun to pour so we decided to stay for a bit longer. We each had another café con leche and once we had finished the rain had let up. We decided to spend the day exploring the Gothic Quarter and El Raval neighborhoods (both on either side of La Rambla). Even though only a few tourist shops were open, we still enjoyed the architecture and the atmosphere of this amazing part of town. 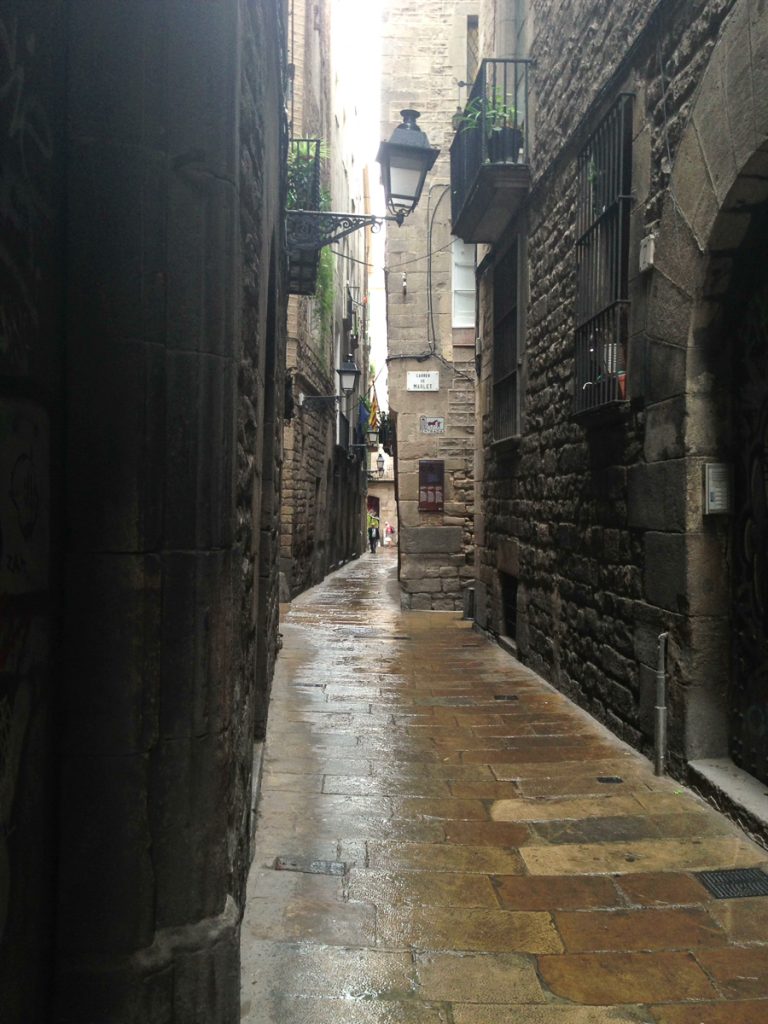 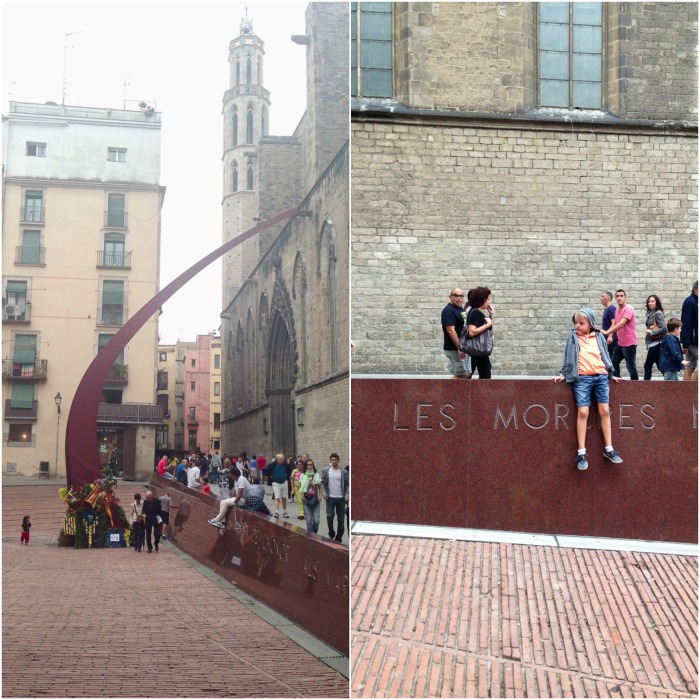 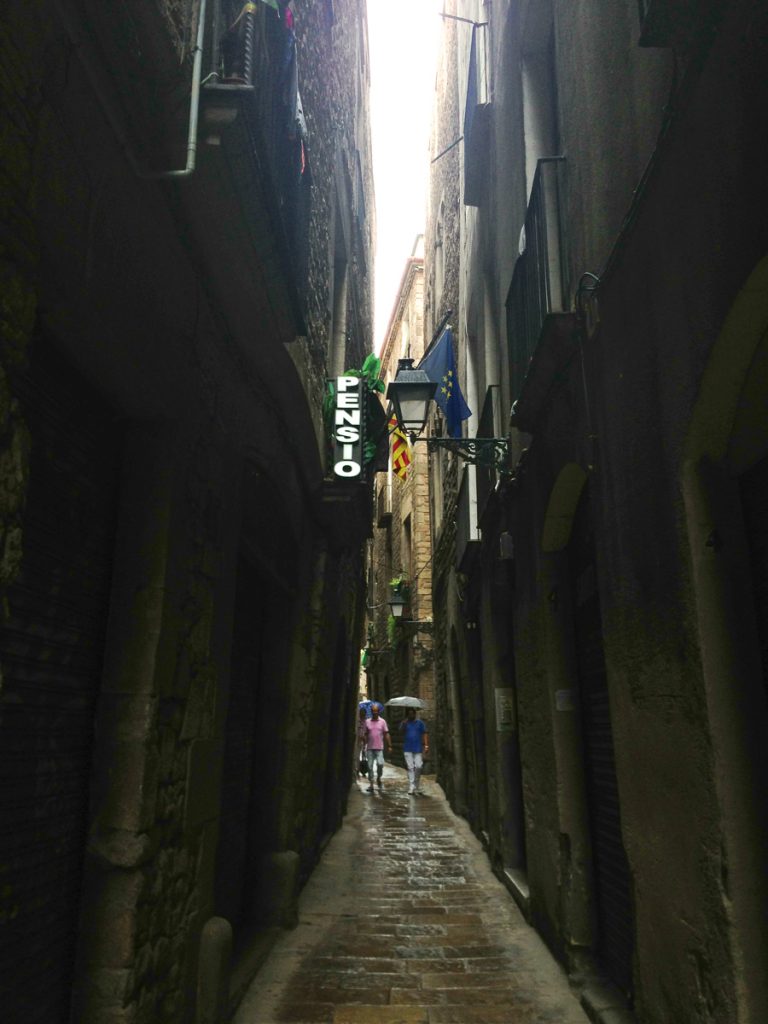 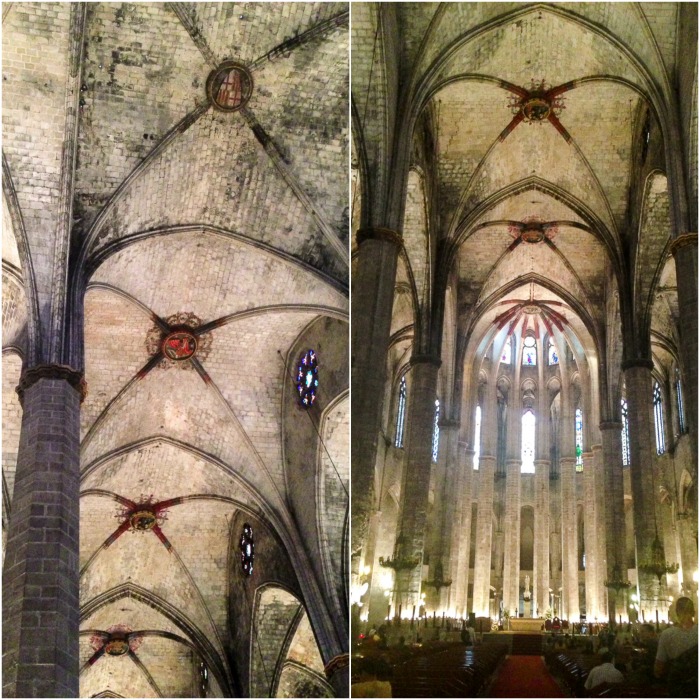 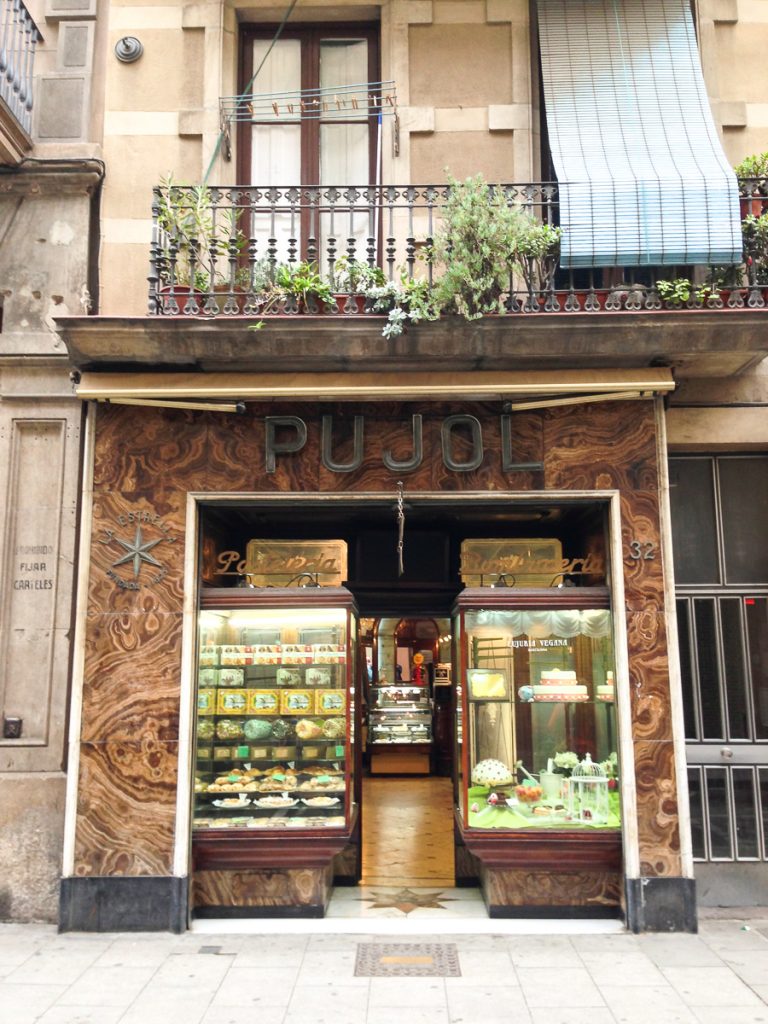 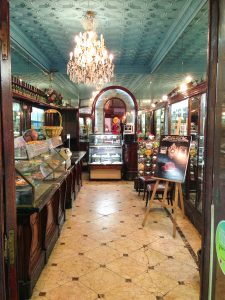 While wandering through El Raval, I thought I saw the word “vegan” catch my eye in a store window. I stopped and looked and since it was a bakery, I assumed it was just my hopeful imagination. After studying the display for a moment, however, I found what I thought I’d seen: a little plate of brownies with a sign that read “Lujuria Vegana.” I stepped inside and asked the man behind the counter and he pointed to a chilled display case next to the door. It was filled with vegan goodies from the vegan bakery, Lujuria Vegana.

If you stumble across a bakery with vegan goods while in another country, I think it would be criminal to not try at least one thing. So we did. We hemmed and hawed until we finally settled on one of the brownies we’d seen on display in the window. 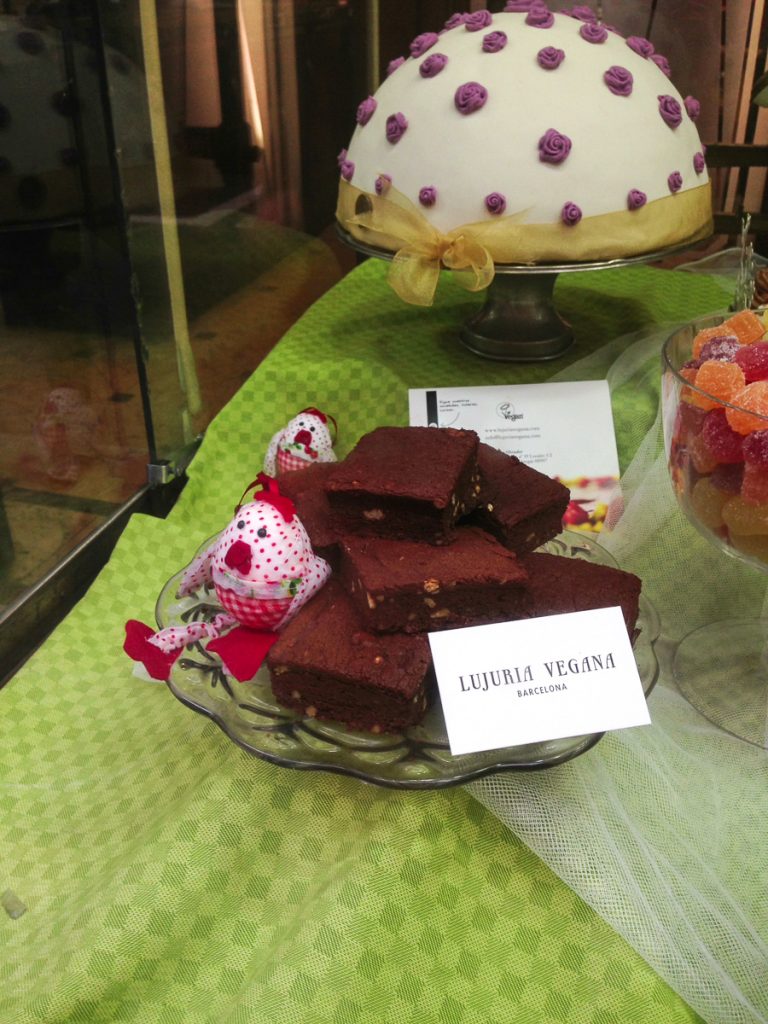 It was very, very good. I wish we had made it back to try one of their cupcakes or one of their fancier pastries, but alas, we didn’t have enough time to try all of the wonderful vegan treats in Barcelona! 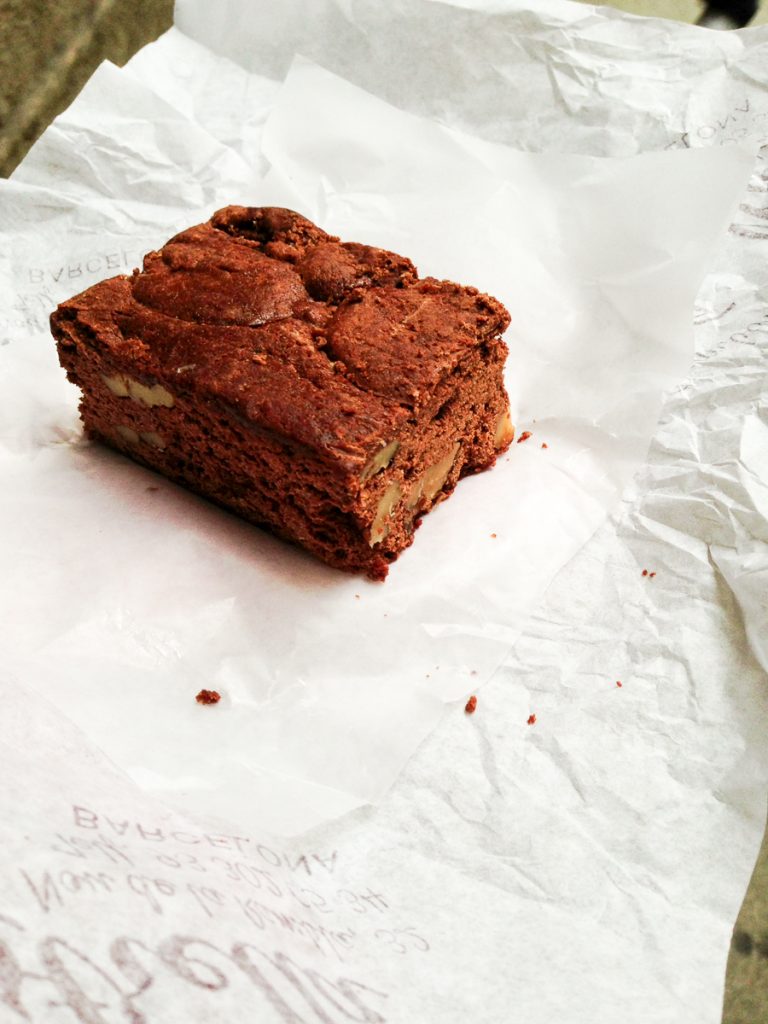 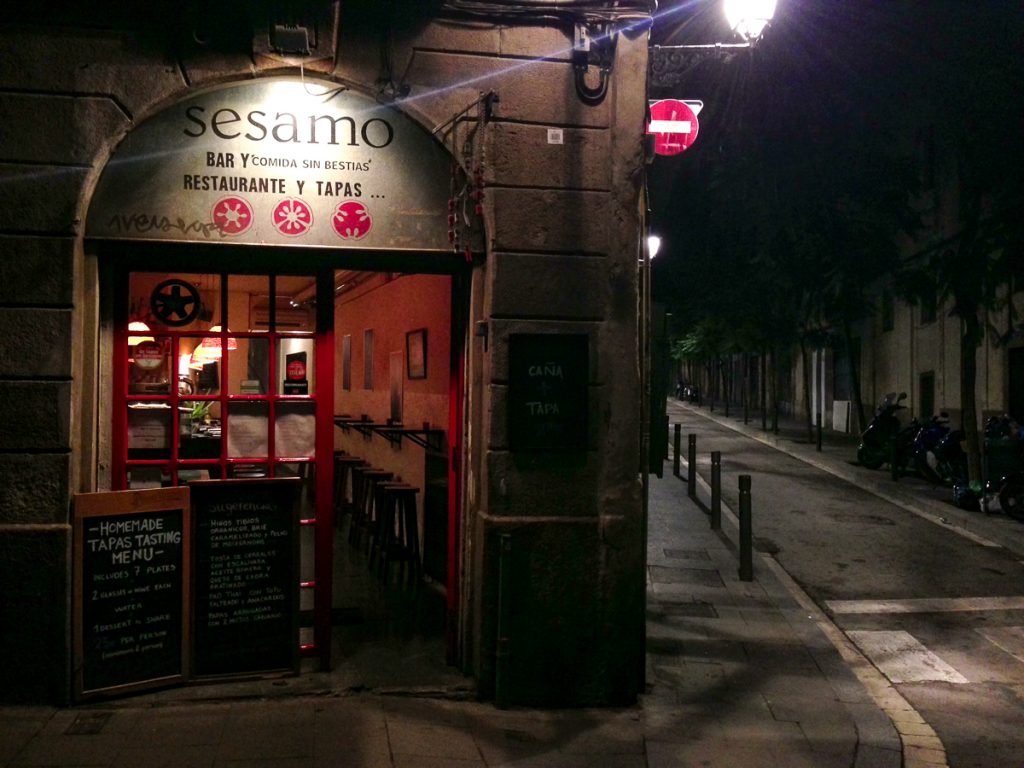 I’d come across Sesamo on Happy Cow before we’d left on our trip, and I’d added it to our list of places to try. Sesamo is an organic vegetarian restaurant with most of it’s menu items capable of being made vegan. It had gotten great reviews and I was intrigued by the idea of being able to have a vegan meal of Spanish tapas. 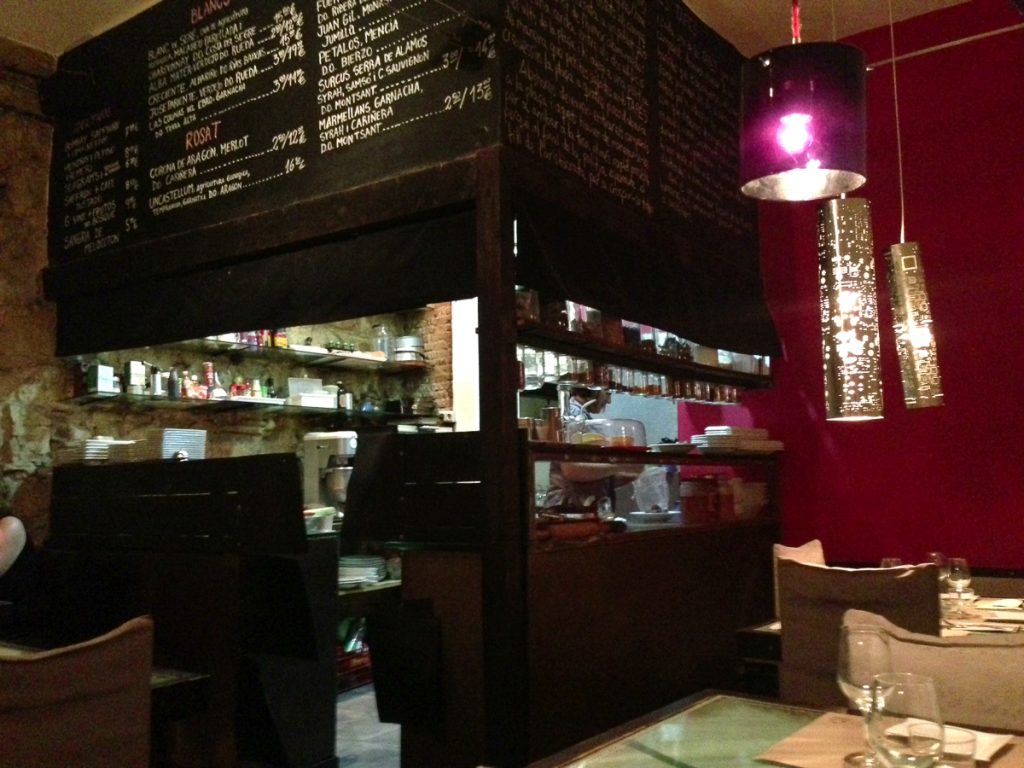 We made a reservation as many of the reviews had said we should do but when we got there, there were a few tables occupied but it wasn’t nearly as packed as I’d expected. The server brought us the Specials board, a chalkboard with the special written in English on one side and Spanish on the other. Every item on the specials menu and the regular menu are marked with a “V” if they are able to be made vegan. 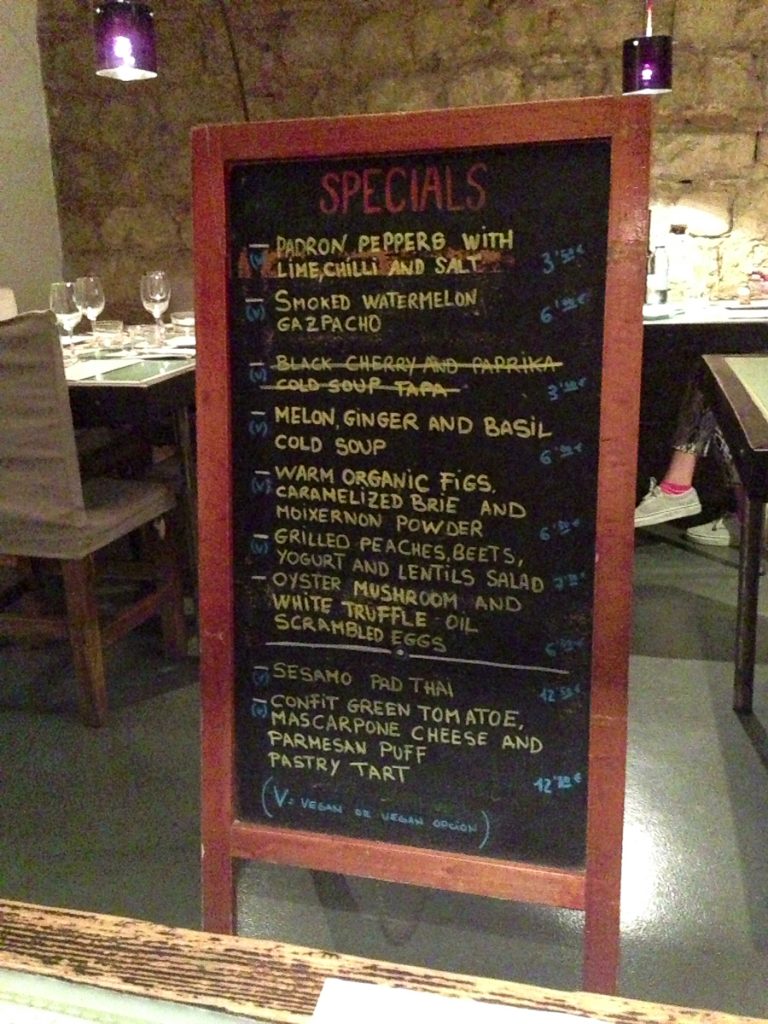 We started off with gazpacho because you have to have gazpacho is Spain. You just do. Chris doesn’t like cold soups but he seemed to be alright with this one. I liked it, but I wasn’t blown away either. 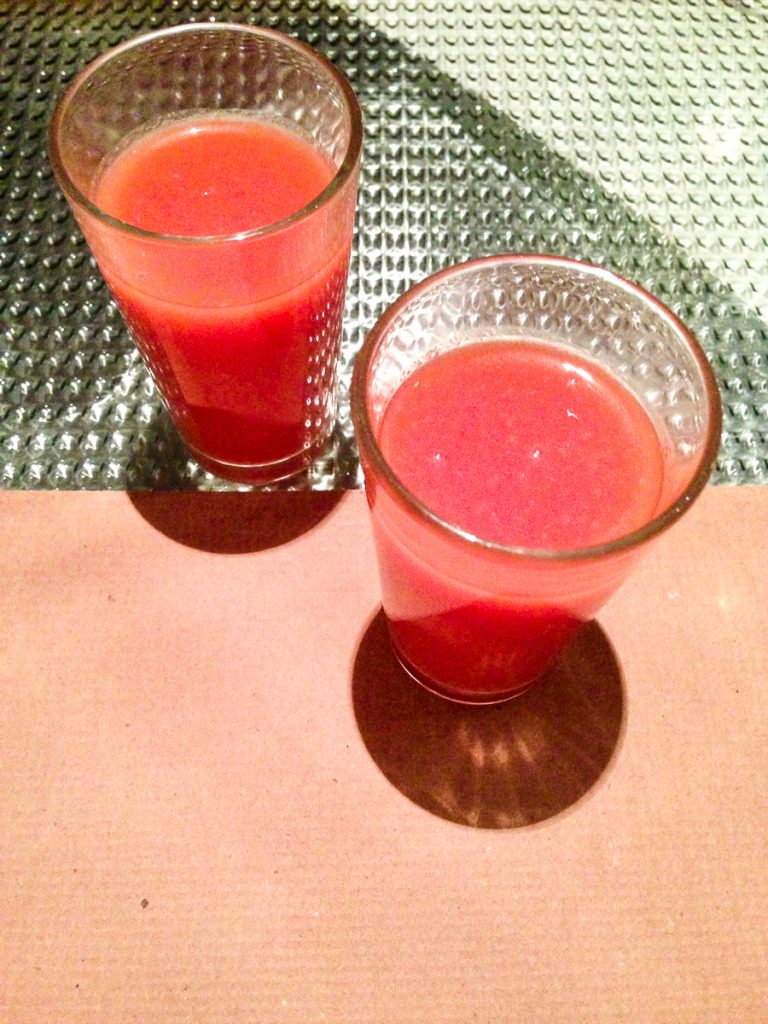 We also got a plate of olives because at this point in my trip, I was at the height of an olive obsession, along with some Pan Con Tomate (which is toasted french bread drizzled and olive oil and rubbed with garlic and a tomato, allowing all of the tomato pulp to stay on the toast). Both were simple but good. It felt good to be enjoying traditional Spanish tapas. 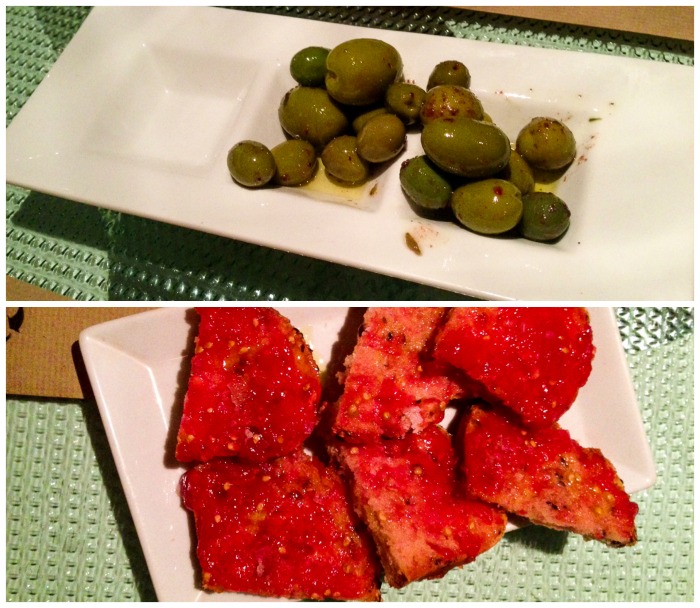 Next up, we branched out and tried a few of their specials. We started with the “Grilled Peaches, Beets, Yogurt, and Lentils Salad.” We were told it could be made vegan so I assumed they would replace the yogurt with a soy yogurt but instead they left it out altogether. It was tasty, but I felt that it would’ve been better with a vegan yogurt mixed in. 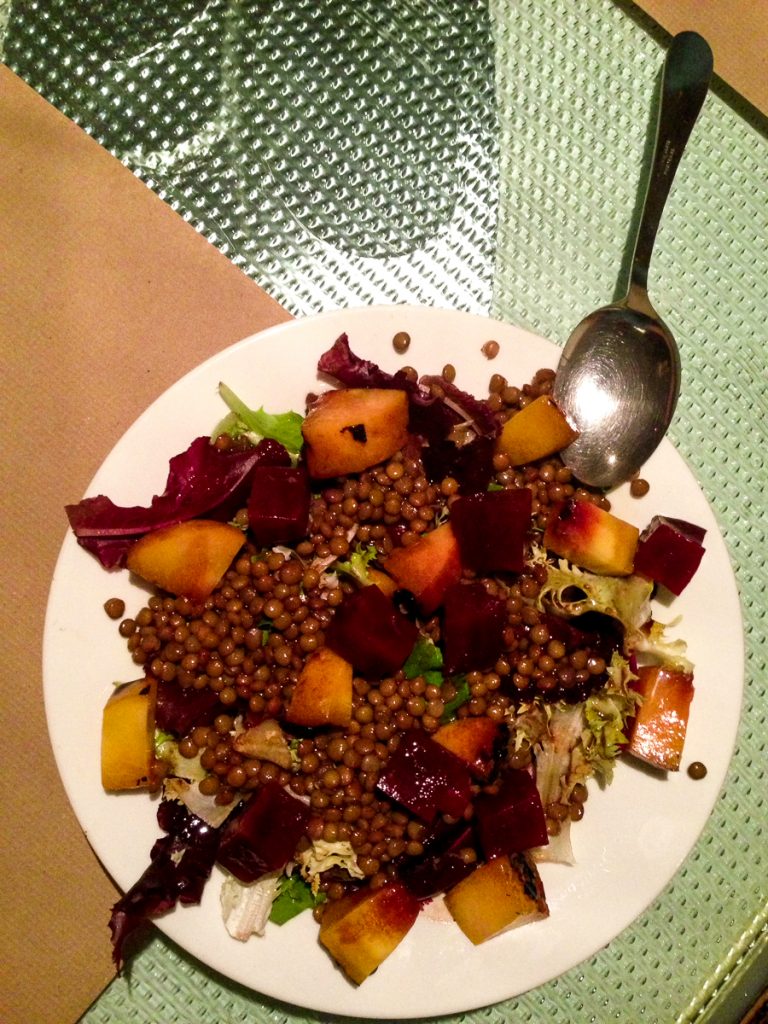 We also ordered the “Warm Organic Figs, Caramelized Brie, and Moixernon Powder.” I was really excited about this one because I was very interested in their vegan version of caramelized brie and I thought the idea of the addition of powdered mushrooms was very interesting. I have to admit I was a little disappointed when we were served figs stuffed with slabs of caramelized tofu. It was still very good but I was a little disappointed, especially when I knew I could make something more interesting at home. 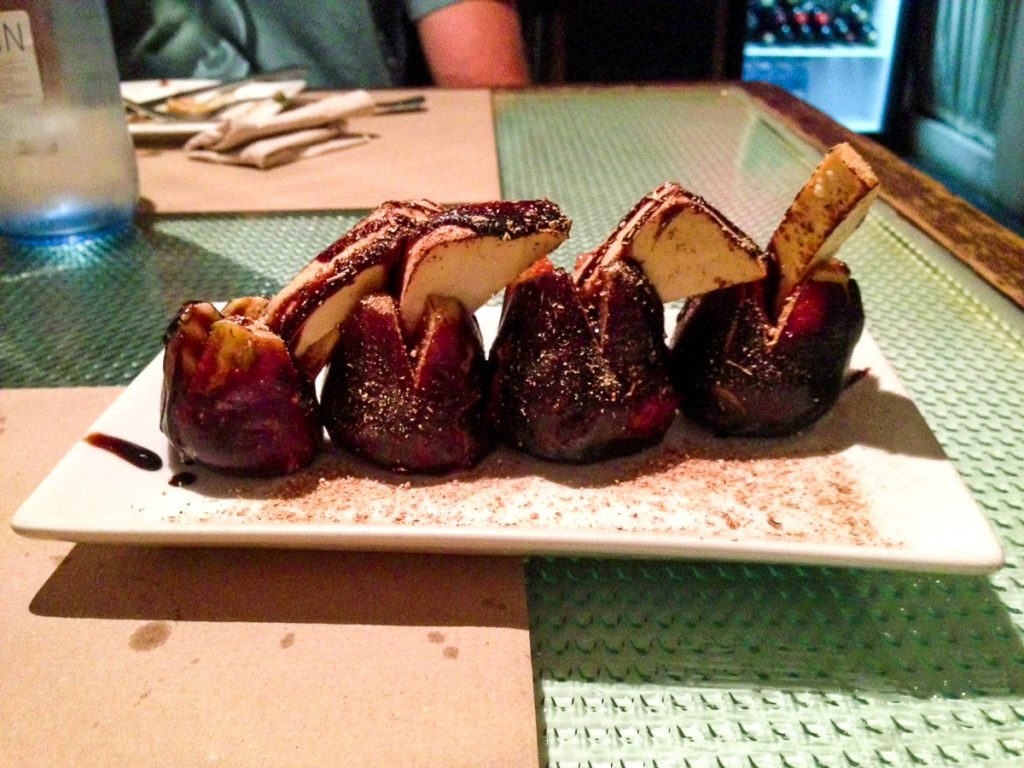 Lastly, we had the “Confit Green Tomato, Mascarpone Cheese and Parmesan Puff Pastry Tart.” Again, I had been excited by the possibilities of a vegan version of this but after the dish prior, my hopes were a little dashed. I wasn’t surprised when they brought us a little tart stuffed with tomato and topped with a few pieces of tofu. It was a little boring but we actually really liked the peppers it was served with. 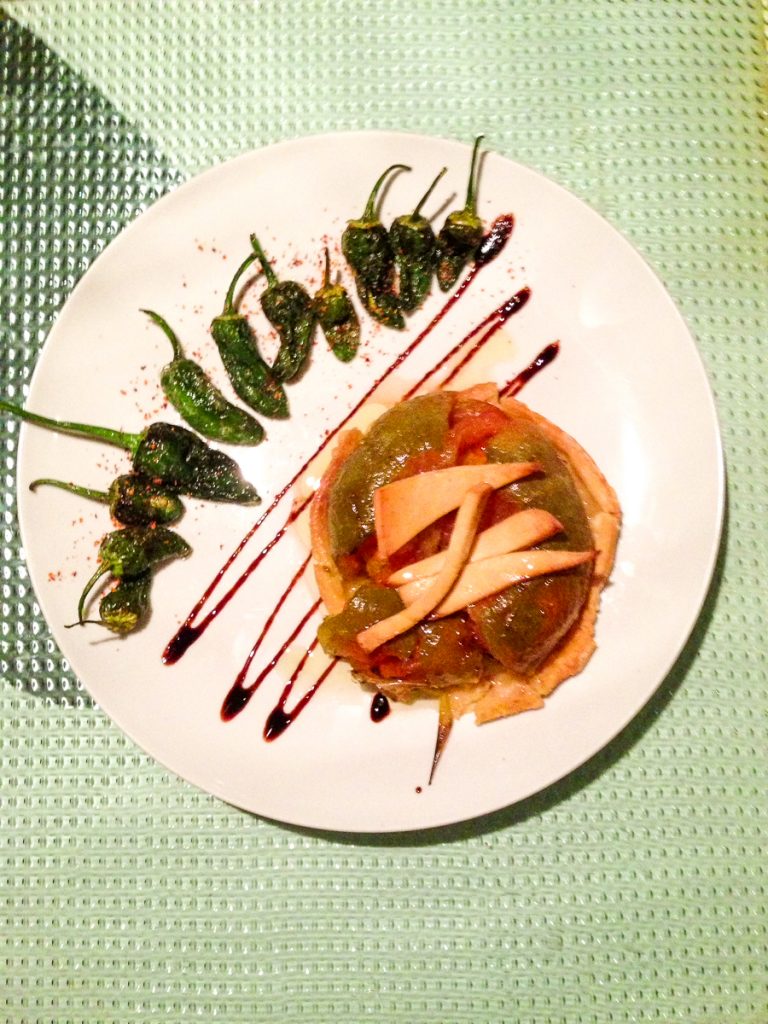 All in all, it was a good meal, though not as good as I’d expected. If you’re looking for a fancy vegan meal one night while in Barcelona, Sesamo is not the place (Spoiler alert- tune in next week for Part 3 and a better place to go for a fancy vegan meal!). I would suggest perhaps stopping in for a few small appetizers before going out to a light dinner elsewhere.

After dinner we walked to Cat Bar to get a night cap, forgetting that it was Sunday and would likely be closed. And it was. So we walked back to our hotel and turned in early (10pm is early in Barcelona).

After a long night of sleep, we woke up refreshed to a beautiful sunny day. We walked to Gopal and had a wonderful, light breakfast. Then we explored a couple shops in the Gothic Quarter that had been closed the day before. We then decided to get a little juice before heading up to Park Güell for the afternoon.

La Boqueria is always referred to as one of the best markets in the world and for good reason. Every time I visit Barcelona, I find myself wandering the aisles of this beautiful market packed with beautiful produce, tantalizing spices, and fresh breads. There are many butchery, cheese, and fish mongering stalls so for a vegan, there are times when you have to avert your eyes. If you just focus on the produce, you’ll be good. 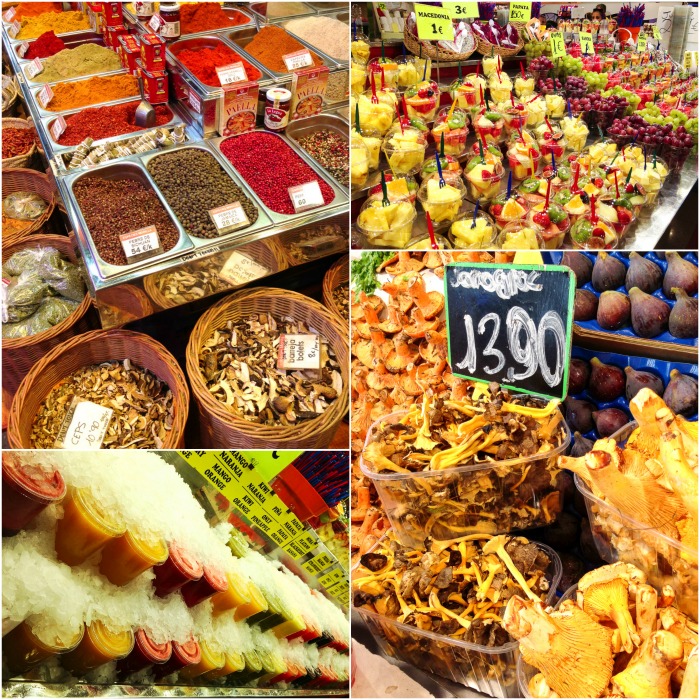 There’s even an organic vegetarian restaurant stall in the back right corner, though I’ve never ordered anything from there. They did appear to have some vegan options, but I didn’t investigate thoroughly. 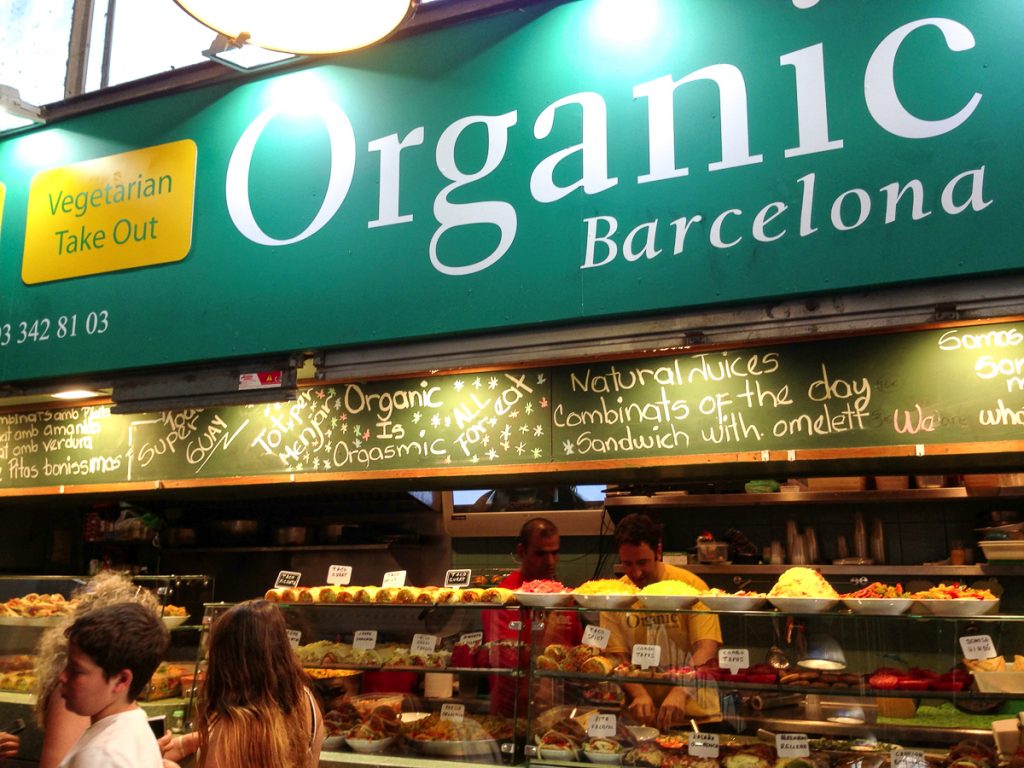 Chris and I got juices from one of the many fruit and juice stalls near the front of the market. I got Kiwi Pineapple and Chris got Strawberry. Both were lovely and refreshing. We sipped them as we made our way to the metro which took us to the bus that we took up to Park Güell. 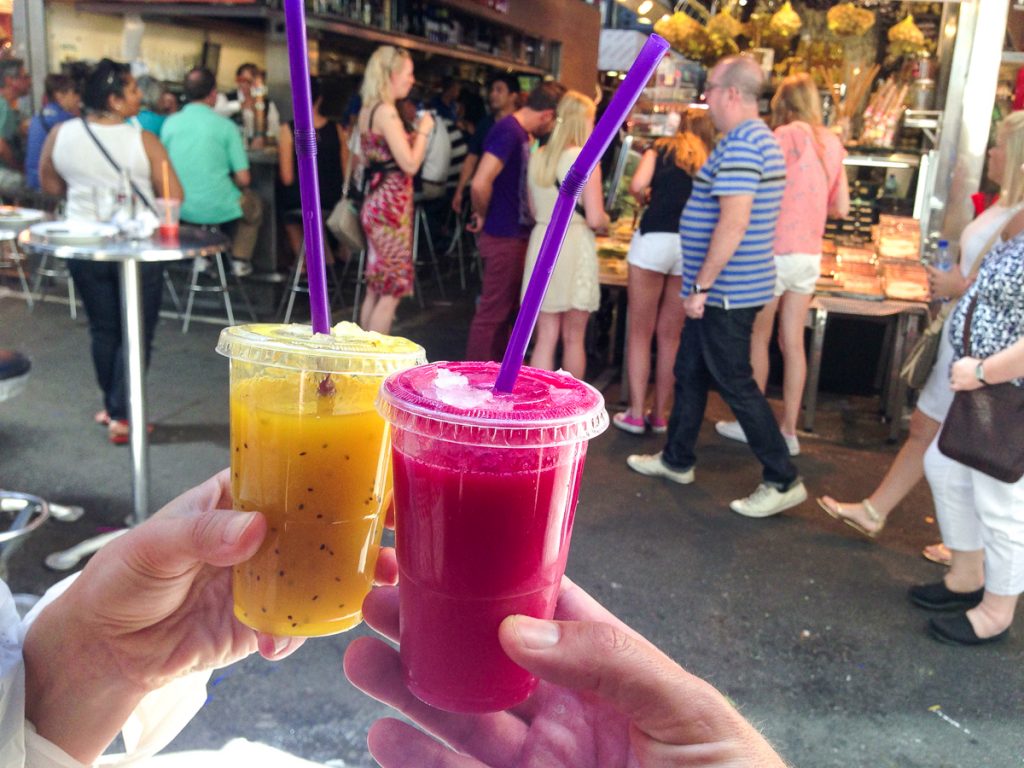 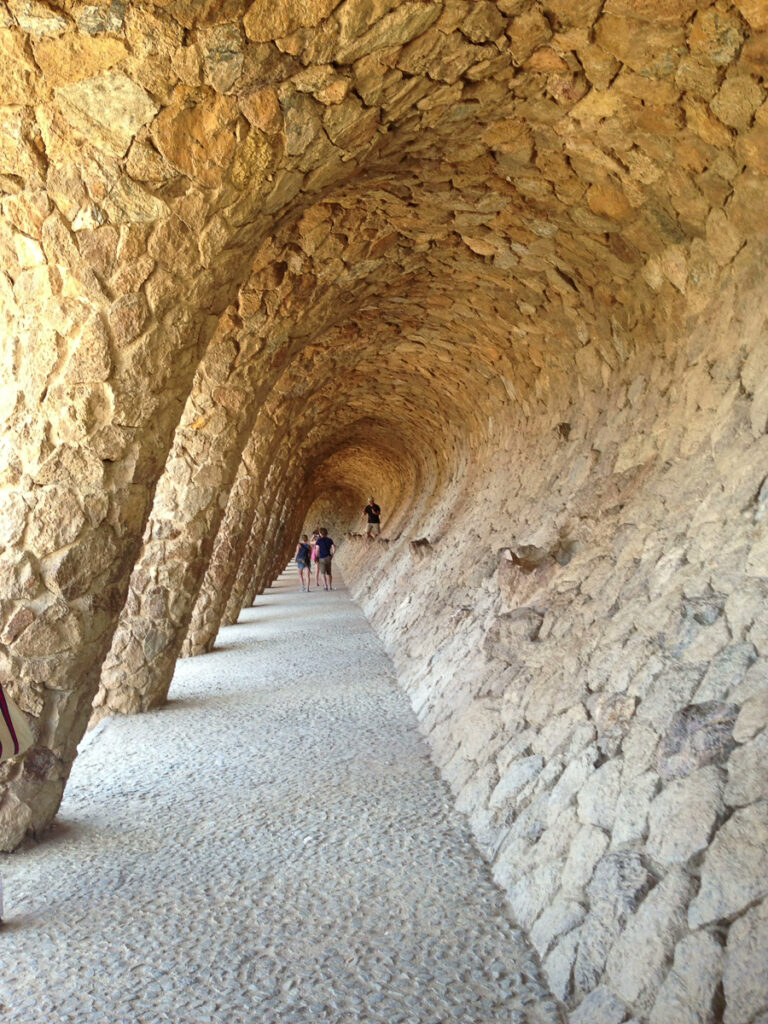 Park Güell is a large sprawling park in northern Barcelona with many architectural wonders. It was built by the amazing Antoni Gaudi in the early 1900’s. It’s also one of my most favorite places on Earth. 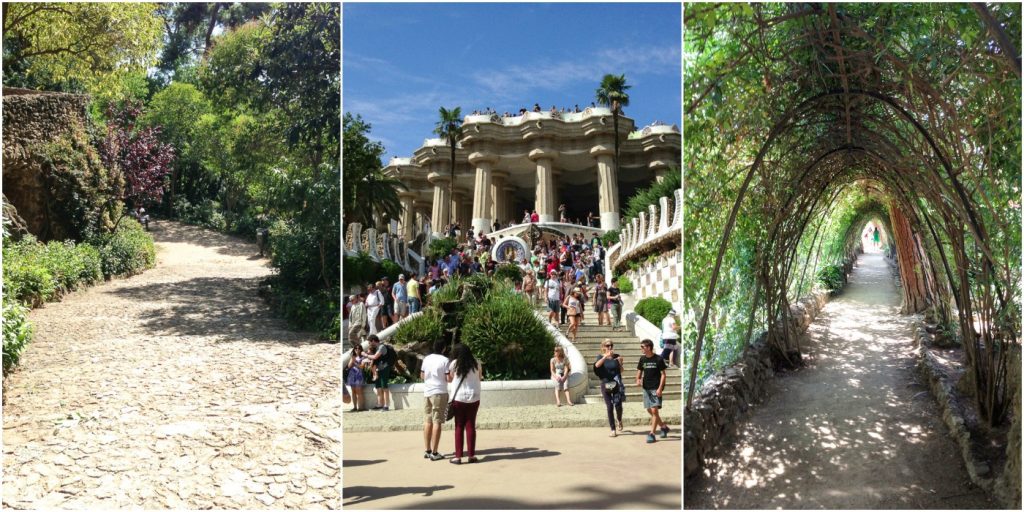 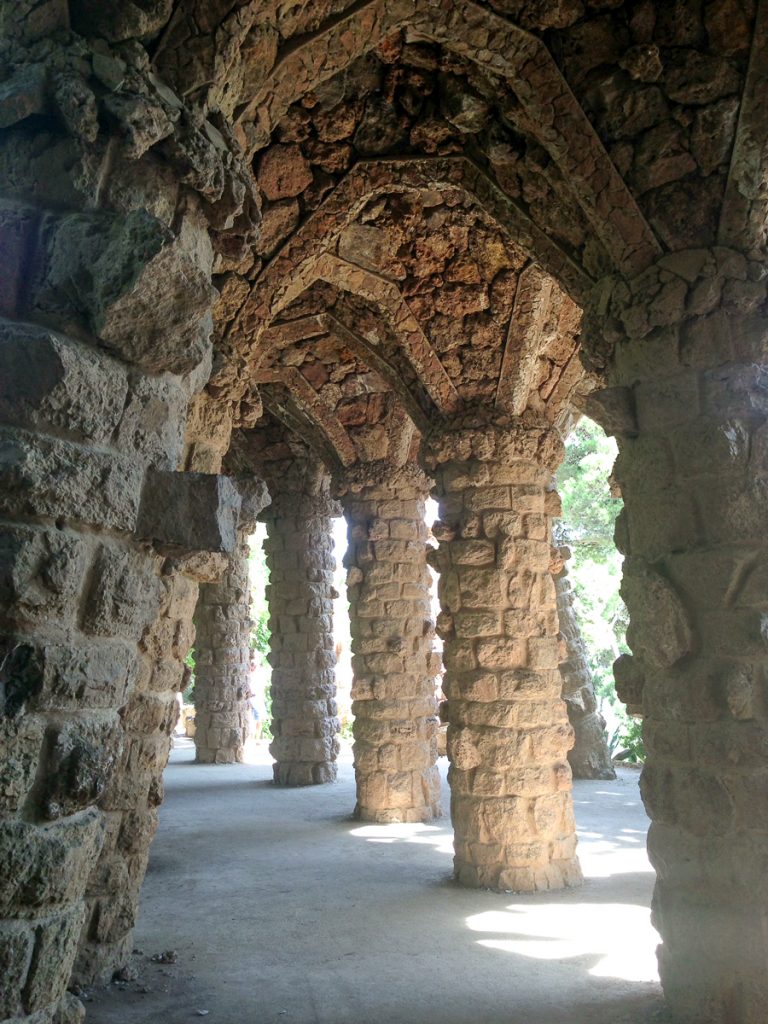 When I’m there, I’m overwhelmed with a sense of peace that I cannot explain. There are always many tourists wandering about which is usually a turn-off for me, but here, I feel set apart from it all. While I’m there I feel so calm and peaceful and happy that I’m always overcome with tears in amazement of it all. I can’t explain it. 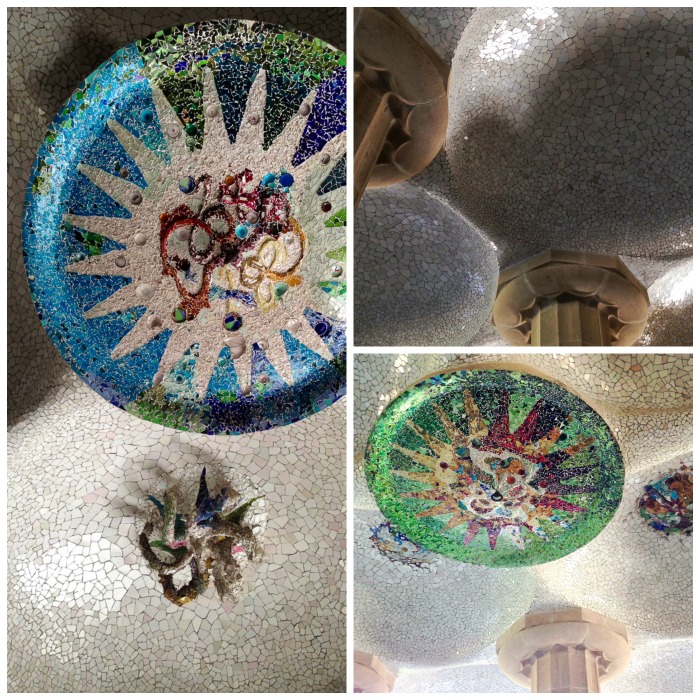 There is a covered area held up by huge columns. The ceiling is covered in beautifully whimsical mosaic tile. This area is my happy place. 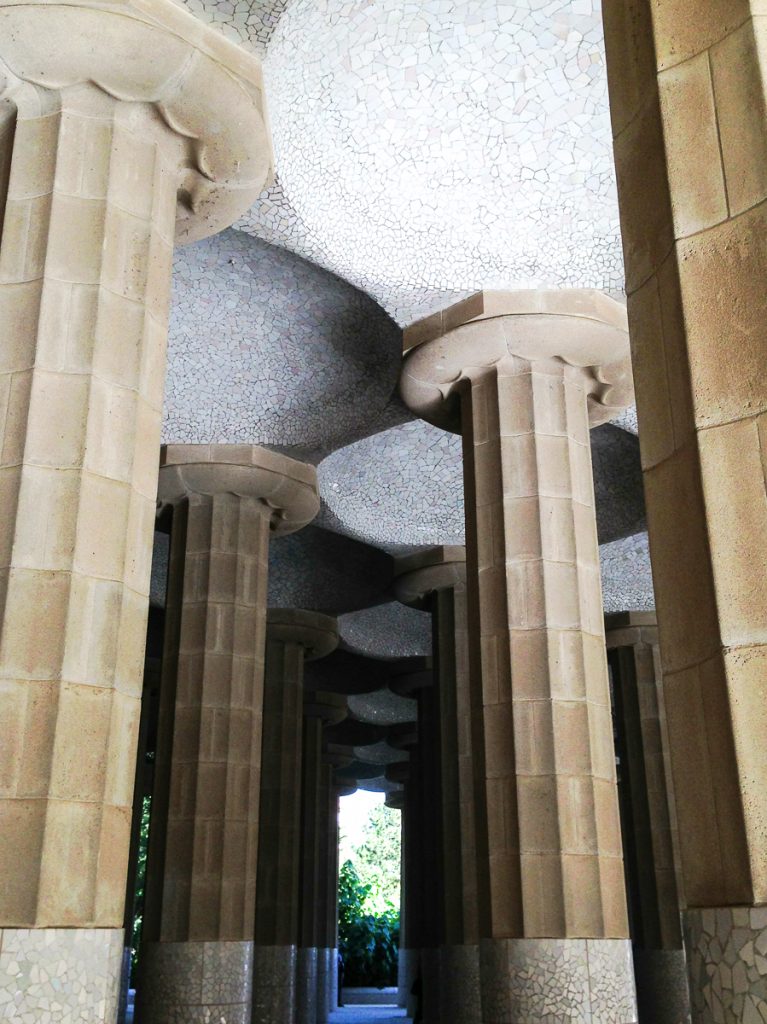 After spending a few hours exploring the park, we felt it was time for some snackage. We hopped on the metro and made our way down towards the University. 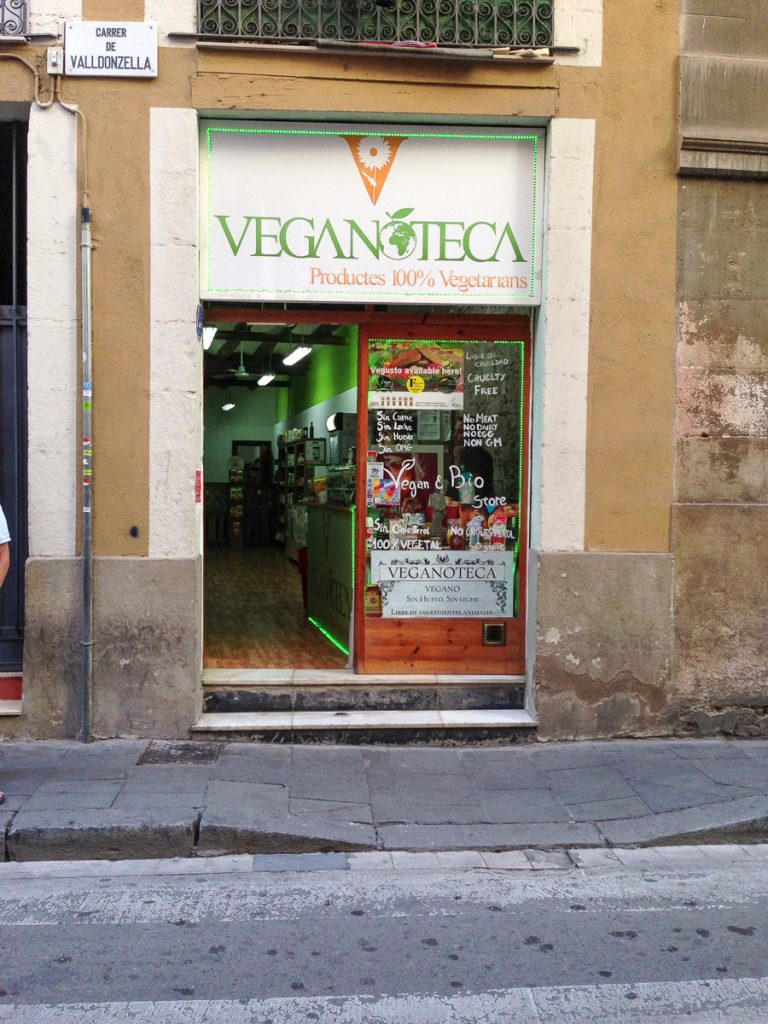 Most shops in Spain close between 1 or 2 pm and around 5pm so you want to be sure to plan your day around this. We got there right as they were re-opening at 5pm. 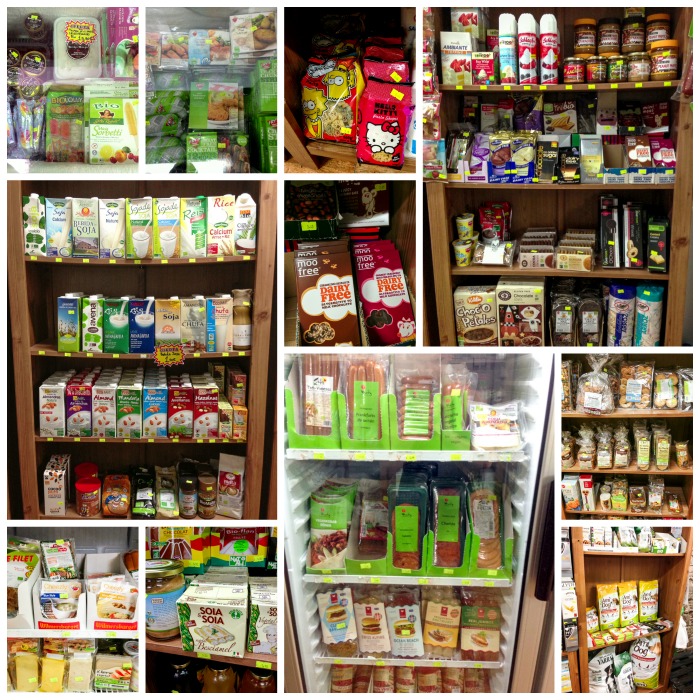 Veganoteca is a small shop but it’s packed with vegan goodies, some of which you can’t even get in the states (Cheezly, anyone?) and some of which I’d never even heard of (Vegan beschamel sauce in a box? And Simpsons pasta? Whaaat?!). We were hungry, but I couldn’t stop looking at every little thing like we were in a museum.

We finally settled on some a Wheaty Spacebar that Chris downed before we could take a picture of it, Wheaty salami, and some vegan pâté for the plane ride home. We stopped at a nearby bread shop and bought a baguette and sat down at the nearest park for a mini-picnic. Fresh baked bread with Wheaty salami? It’s the food of kings. 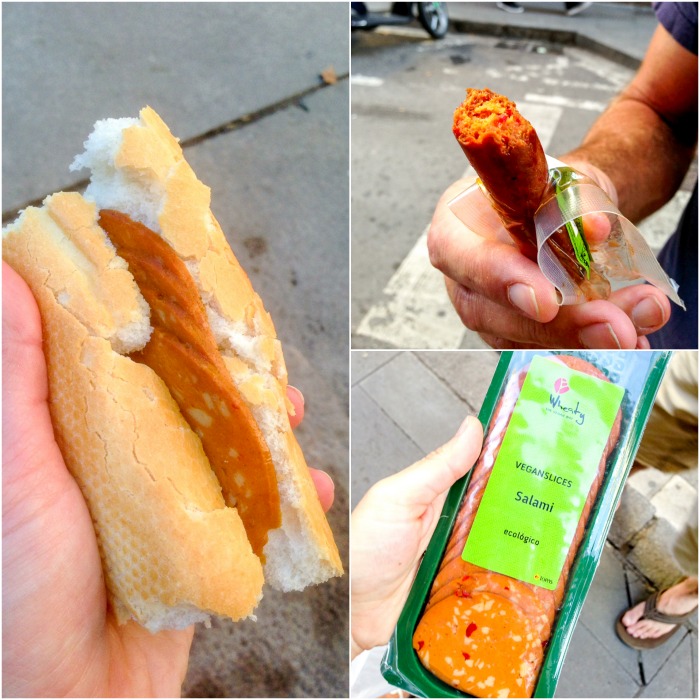 After relaxing in the park, we headed back to the hotel for our evening olives and cava ritual before grabbing a light dinner at Gopal.

For Part 3 of our Vegan Travel in Barcelona series, tune in next week and be sure to catch Part 1!

I Need You! *points finger at you, Uncle Sam-style* A Letter to My Grandma