A couple of weeks ago, with our first wedding anniversary approaching, and falling on a Saturday, we decided to get away for that weekend.  We tossed around several ideas, but settled on Santa Barbara.  We’d been there together a couple of times and we really love it there.  It seemed like the perfect place to run off to for the weekend.

Booking.com had other plans for us.  For some reason (I’m assuming because it was the weekend following Independence Day), the cost of hotel rooms skyrocketed for that weekend, and it was going to cost us at least $800 for 2 nights in Santa Barbara.  We both agreed that cost was a wee bit absurd and decided to look elsewhere.  After tossing around several more ideas, we finally landed on Palm Springs.  It was not too long of a drive away, we found a nice hotel that was reasonably priced, and it was a place neither of us had ever been.  We love exploring new places together, so we booked the trip. 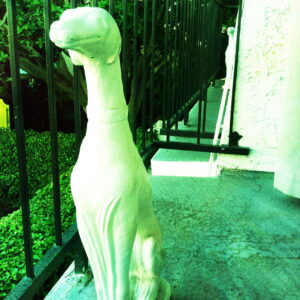 We chose to stay at the Viceroy because it seemed to be centrally located, near downtown Palm Springs, the cost was reasonable, and the pictures of the rooms looked very Old Hollywood/Mid-Century Modern (basically super friggin’ cool).  The Viceroy did not disappoint.  Our entire room was decorated in black, white, and yellow.  We even had a bright yellow candelabra/chandelier hanging in our room.  Our balcony had a table and chairs and a dog statue.  A Dog Statue!  It made us feel very regal and debonair, and we tried to hang out on the balcony for awhile, which is where we realized why the rooms were so inexpensive: we had chosen to come to the desert at the hottest time of the year (we knew it was going to be pretty hot, but didn’t expect 115 degrees).  Our lounging on the balcony did not last 5 minutes.  Another plus for the Viceroy: Great air conditioning. 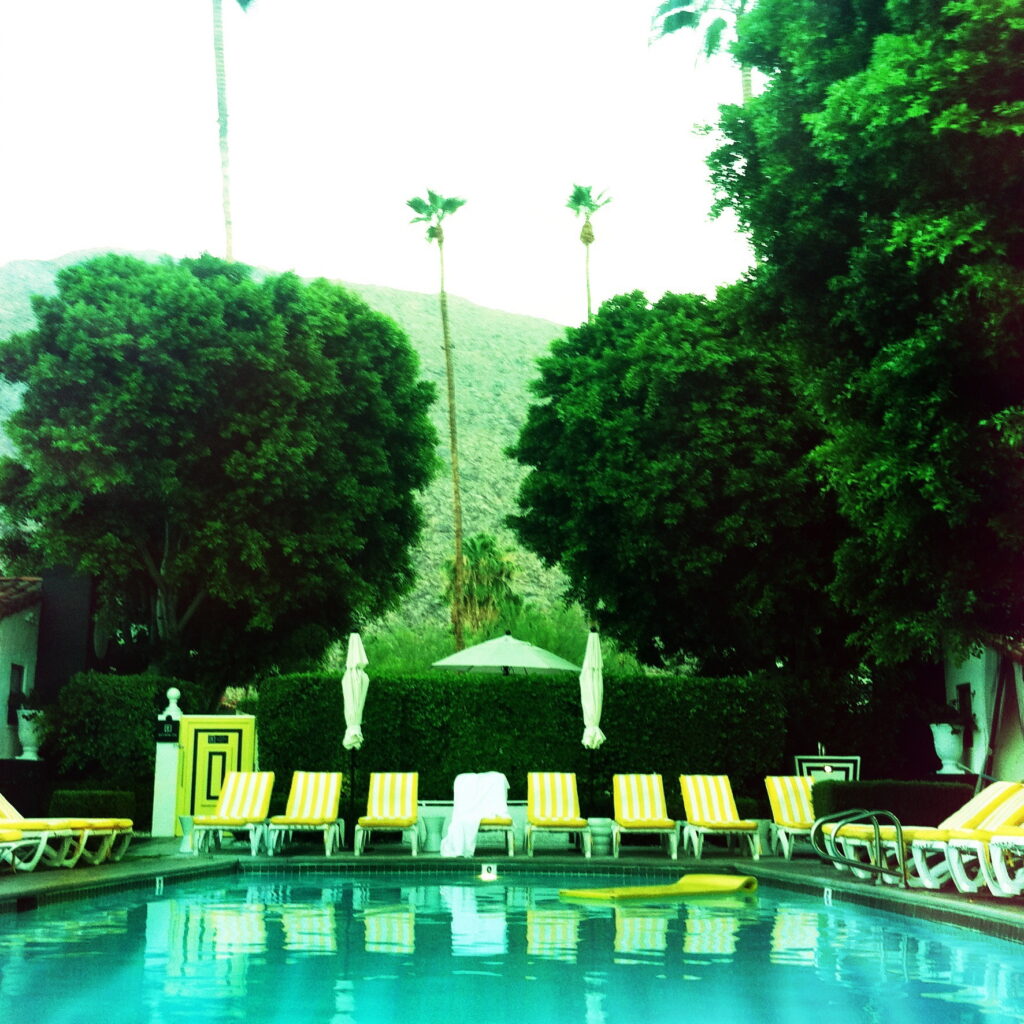 There are three pools on the property, including one adult-only pool.  Our first night there, we sat with our toes in the water for awhile and it was quite nice.  The next day, we spent a big chunk of the day hanging by the pool (mostly in the pool).  We brought nuts to snack on, but in the afternoon we got quite hungry, and not wanting to leave to go to a restaurant with vegan options, we decided to check out the poolside menu.  The Viceroy gets bonus points for having a vegan option: a roasted garlic hummus plate with pita and a salad.  They get even more bonus points for carrying a vegan sparkling wine (Kenwood), should you want some champagne while laying poolside! 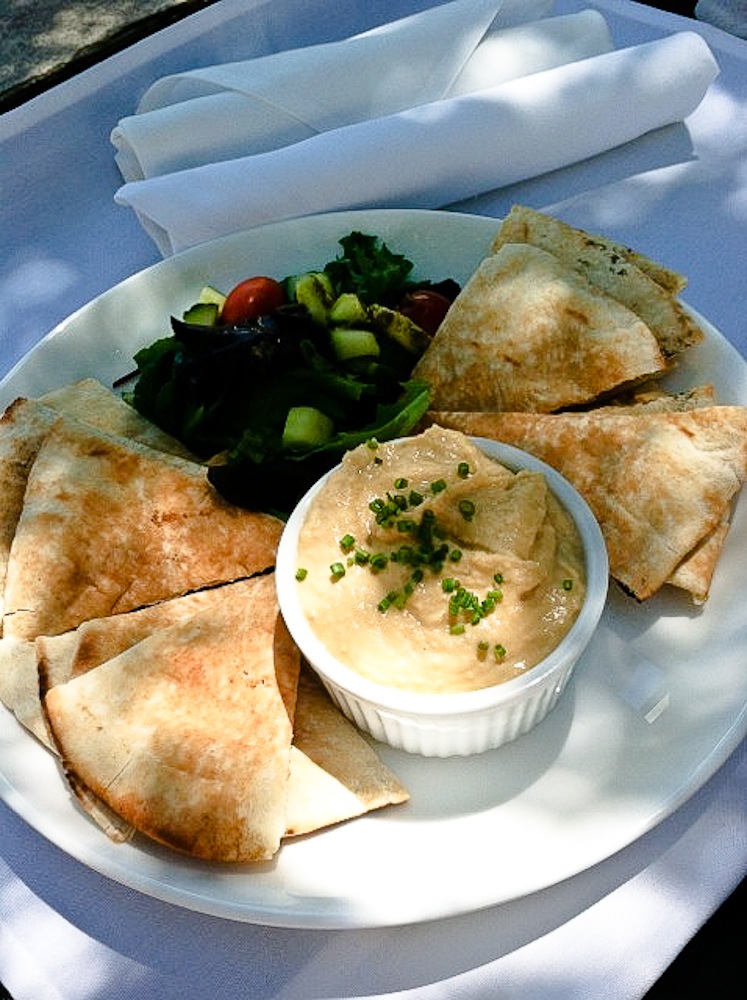 The Viceroy also has a spa on site, that has its own cafe menu, complete with various juices.  The downfall is that when I tried to order one, she said they were out of juices and wouldn’t be making more until tomorrow.  I was bummed that they didn’t serve fresh juices, but glad that they at least had a healthy, vegan refreshment. 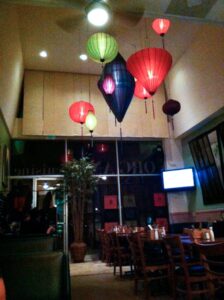 After arriving in Palm Springs, and sitting with our toes in the pool for awhile, we needed dinner.  Luckily, The Palm Greens Cafe was within walking distance from our hotel, and the online menu appeared to be full of vegan options.  We walked over and were very quickly seated in the very dimly-lit restaurant (read: excuse for pretty crappy pictures).  There was a very peaceful ambiance, however, there were also four television screens, all showing surfing documentaries.

There were several vegan options on the menu.  We decided to start with the guacamole and salsa with flax chips.  This was my favorite part of the whole meal.  Those chips are crazy good. 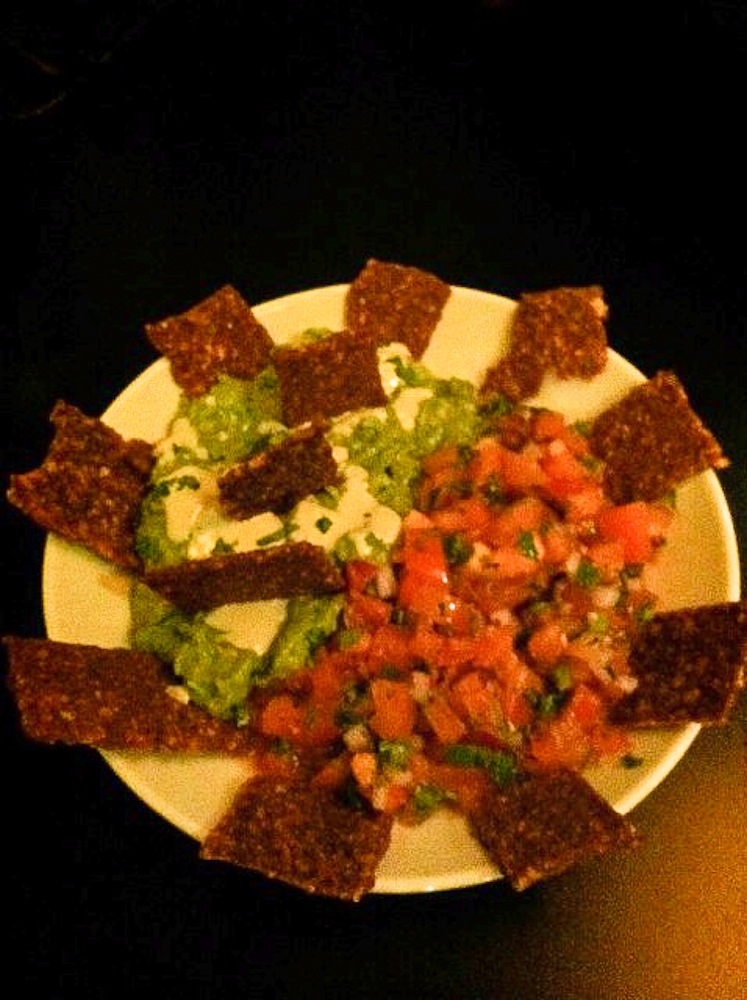 Seeing as how there was a Vegan Tempeh Reuben on the menu, one of us had to try it out.  Chris volunteered himself to be the one to try it (he’s such a trooper).  It consists of one big tempeh patty, which is unusual for this type of sandwich, along with daiya cheese, russian dressing, and sauerkraut.  He was a pretty big fan of it, despite the patty, but he did not care for the thai cole slaw on the side. 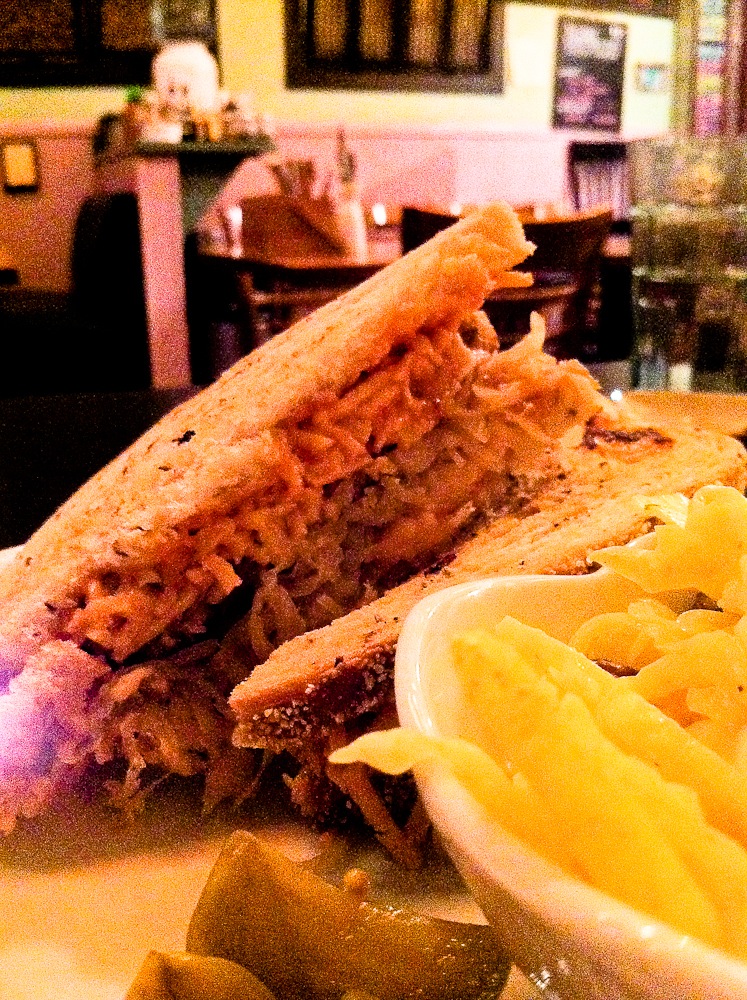 I ordered the Deconstructed Chile Relleno.  It comes with black beans, brown rice, roasted chiles, sweet potatoes, potatoes, and carrots, topped with a homemade mole sauce, and it’s served with 3 small flour tortillas.  It was very tasty, but didn’t really knock my socks off (I would love to see socks literally knocked off a person, though.  I would pay good money for that show). 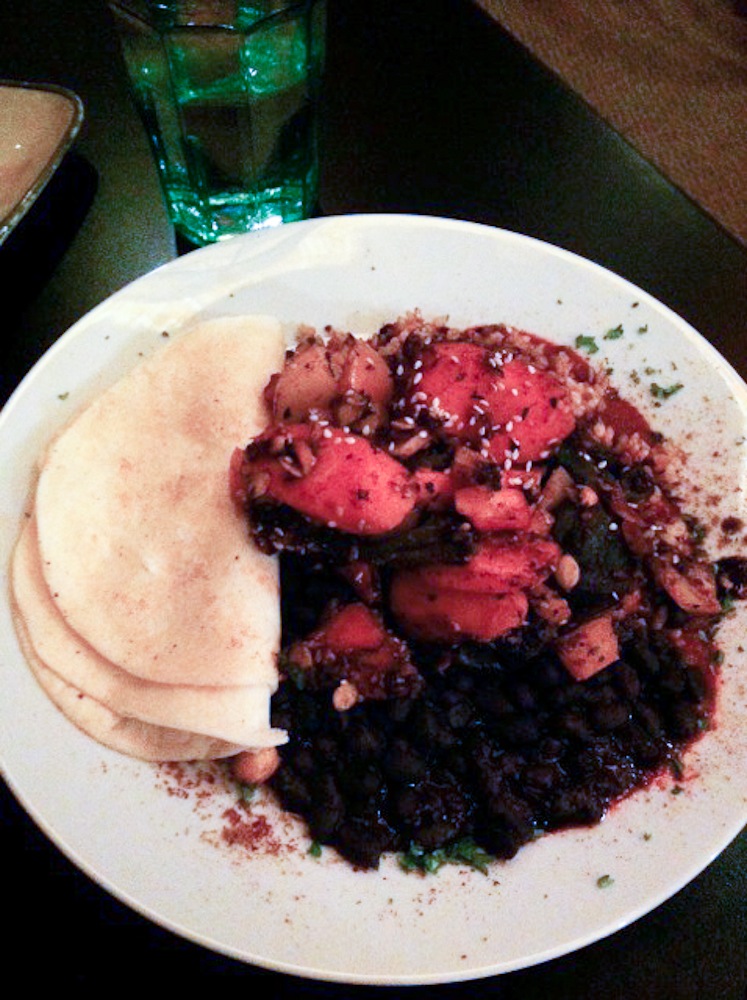 During dinner, we noticed the breakfast menu on the wall, and among the specials, a “Jungle Bowl” was listed.  It was described as an acai bowl, filled with acai puree, almond butter, fruit, and topped with granola, banana, and papaya.  Because we are having a love affair with acai bowls right now, we knew where we were going for breakfast the next morning.

When the cafe is serving breakfast, you order at the counter and then take your seat and wait for your food.  It was definitely busier that morning than it was the night before, and I was drooling over other people’s meals: vegan french toast (there’s a gluten-free option), vegan blueberry buckwheat pancakes (there is a gluten-free option for these as well), tofu scrambles.  Almost every item on the breakfast menu can be made vegan, and everything I saw looked fantastic.  I waited patiently (ok, I wasn’t that patient) for my Jungle Bowl, for what seemed like an eternity. When our bowls were finally brought to us, I think I heard a record player screech to a stop. 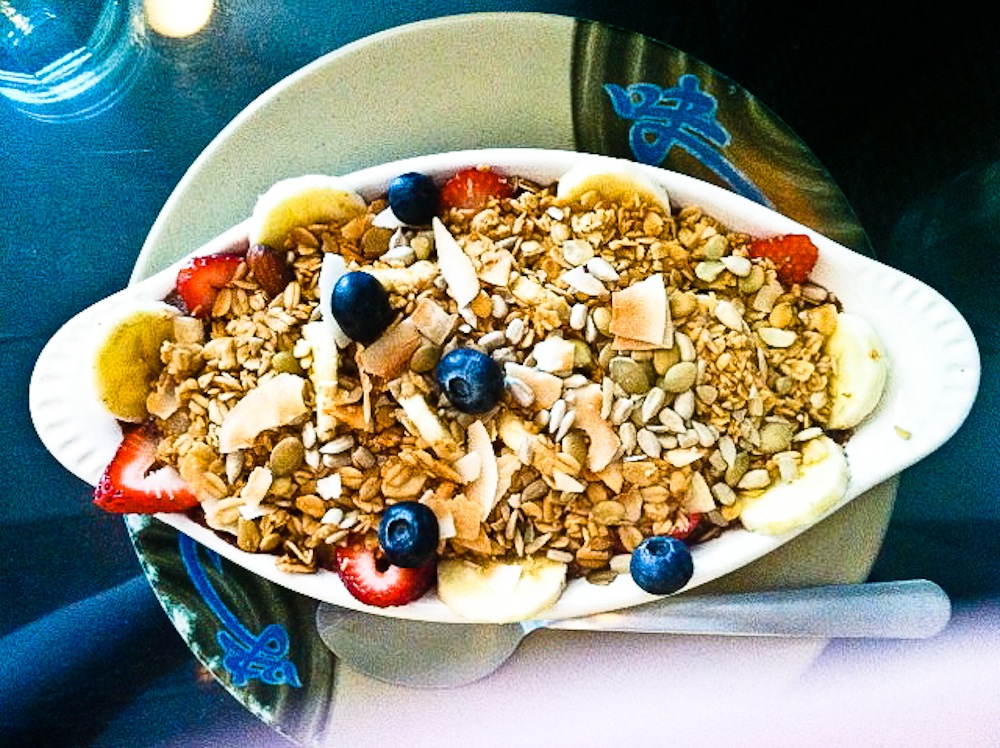 Only ever having insanely amazing acai bowls, these tiny dishes did not quite pass muster.  The almond butter was very overpowering, the granola a little tasteless, and perhaps the most disappointing:  the smoothie itself was not really cold at all, and pretty much completely melted.  Chris thought his was alright, but I had to force myself to finish mine.  I would definitely suggest this place for vegan eats, but I would steer clear of the Jungle Bowl (in other words: I wish I ordered the french toast).

We stumbled upon Lulu during a very brief, but sweaty walk around downtown Palm Springs (which was immediately followed by quickly driving back to the hotel and throwing ourselves in the pool).  We were looking for nice places that might have vegan options for our anniversary dinner (after the acai bowls, we were done with the Palm Greens Cafe).  There was a vegetarian menu, with a few items that looked to be veganizable.  When we asked the hostess, she was not totally clear about what the word “vegan” meant, but said our waiter would probably be able to help us.  There was also only a $15 corkage fee, so we could bring that bottle of vegan wine we’d picked up at a Trader Joe’s on our way into the desert.  We decided to give it a try, and if it it didn’t work out, we knew we could just go back to Palm Greens Cafe.

We arrived around 7pm and were able to get seats outside, just when the temperature had begun to drop, so the weather was rather pleasant.  After some conversing with our waiter who then conversed with the chef, we had a vegan menu!  We started with The Portobello Mushroom Tower (sans mashed potatoes), which was basically a couple portobello mushrooms and sautéed spinach, layered together.  We were so hungry we forgot to take pictures of that one.  It was nice, and we were so thankful that the chef was willing to make a nice vegan appetizer for us.  Next up, we shared the Quinoa Stuffed Acorn Squash (sans the dressing, which contained honey).  The quinoa salad was filled with  spinach, roasted peppers, corn, figs, and almonds, and then stuffed inside a roasted acorn squash half.  It was so nice and surprisingly light, and drizzled with a little balsamic vinegar (which is available at every table), it was quite delightful! 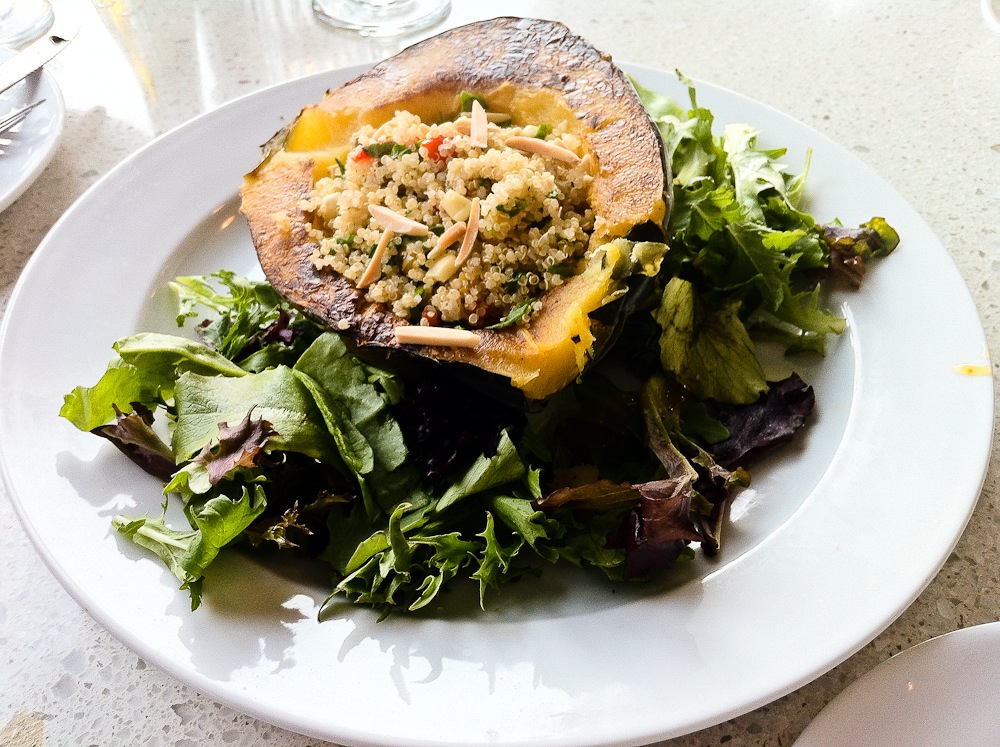 For our main course, we had the Vegetarian Pizza, with Wood-Roasted Vegetables (sans the cheese).  Tomatoes, black olives, bell peppers, and capers topped the wonderfully thin, but still slightly-doughy, crust.  We loved it and didn’t want it to end. 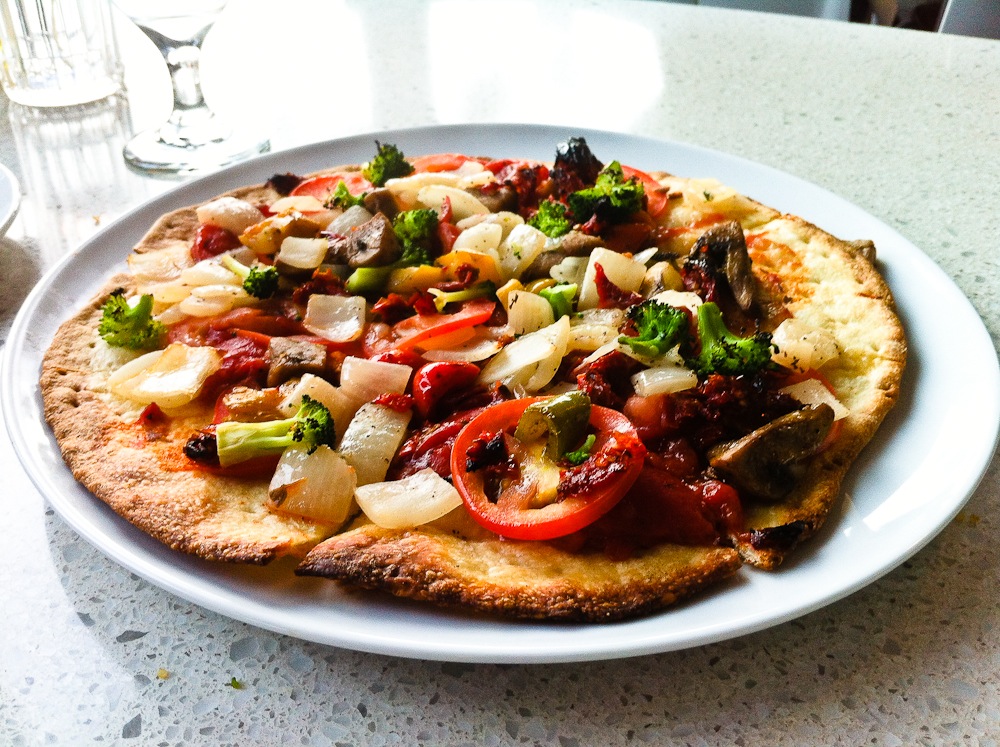 The waiter talked to the chef and reported to us that the sorbets were vegan, if we wanted a dessert, but we opted to go back and have our anniversary cakes.  I would highly recommend Lulu if you are in downtown Palm Springs and in need of vegan options.  I loved how accommodating they were and the food was great!

The next morning, before we headed back to LA, we decided to try out Nature’s Health Food & Cafe because they had vegan options, great reviews on yelp, and even Quarrygirl approved of them!  They have a great little market with plenty of vegan and gluten-free staples, as well as a cafe area with counter service.  We saw that they also had acai bowls on their menu, and were going to give them a try, but after investigation, the chef found that the granola was made with honey.  We each decided to get smoothies (Chris got the Tropical Blend and I got the Acai Berry Blend) as well as tofu scrambles (it comes with brown rice, but we asked them to hold it because we weren’t in the mood for it). 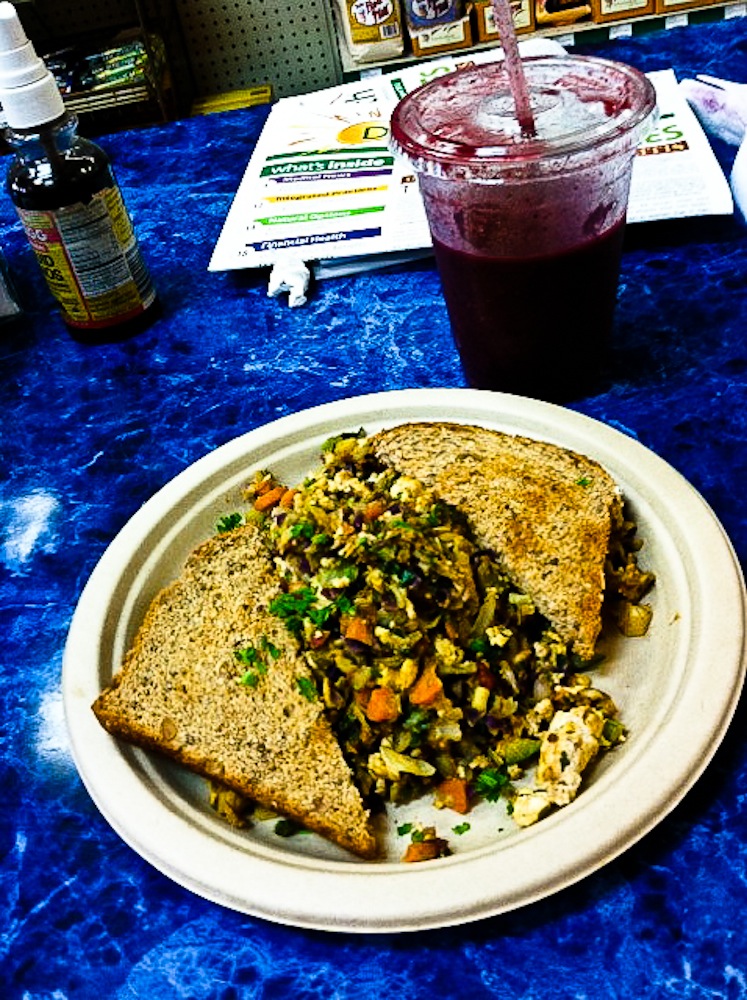 We loved the scrambles.  Tall piles of perfectly scrambled tofu (though the pieces were smaller than what we are used to), with tiny pieces of zucchini, carrot, chard, purple cabbage,  broccoli, and probably more vegetables that were too small for me to identify.   It was so satisfying, and along with the smoothies (that did not photograph well), it was probably one of the best things we ate while we were in Palm Springs. 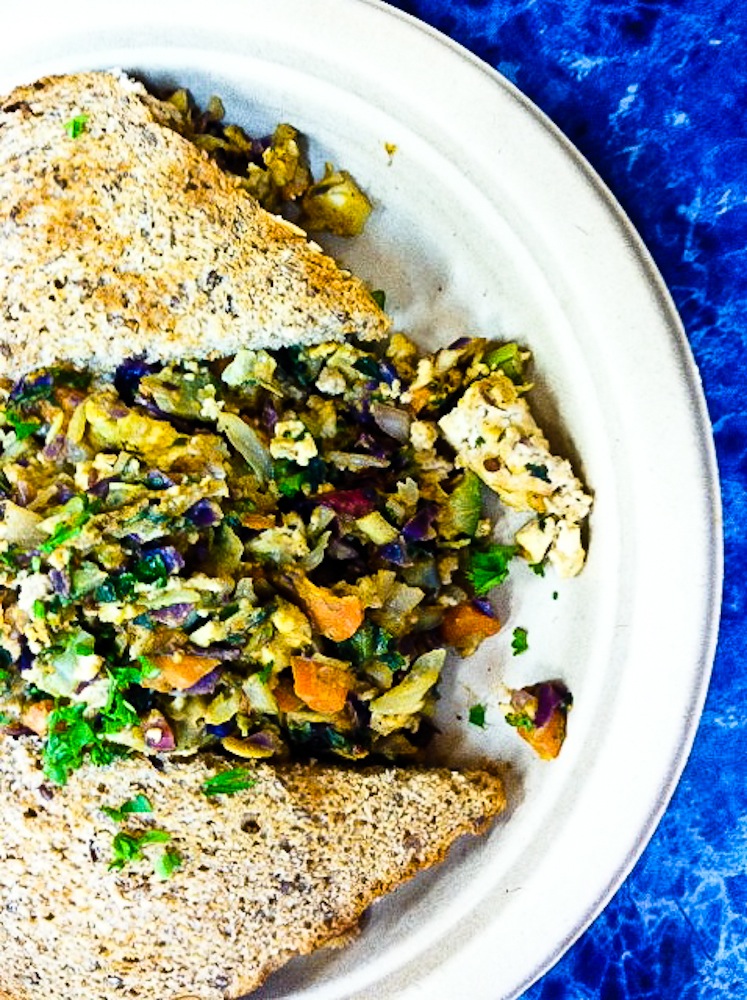 Palm Springs is definitely not the most vegan-friendly of places, but I loved that there were two places that had set (and clearly identifiable) vegan options.  I loved that the folks at Lulu were so accommodating and willing to make changes for us.  I loved that even at our hotel, we were able to find delicious snacks.

We had a blast in Palm Springs, and as usual, we loved exploring a new place together.  With that said, I am still not entirely sure what the huge draw to this town is.  There’s a huge statue of Marilyn Monroe that had flocks of people surrounding it at all times.  There’s a lot of mid-century modern furniture stores.  It’s a very dog-friendly town.  It seems to be a mecca for the gay and lesbian community, which is great.  Neither of us feel the need to return to Palm Springs, but If you haven’t been, go check it out!