When Chris and I became vegan, the biggest challenge was learning what ingredients were vegan and which were not.  We became serial ingredient readers and it was not uncommon for us to stand in an aisle at the store for several minutes while we looked up, on our phones, each ingredient to see if it was vegan.  Store clerks would offer help, but the majority of the time, they did not know either.  We eventually just found a selection of products that were certified vegan or that we had researched and found to be vegan, and now shopping doesn't take nearly as long. 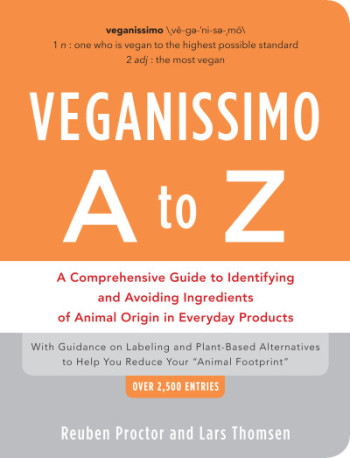 Veganissimo A to Z, by Reuben Proctor and Lars Thomsen, is a new in-depth guide to ingredients, covering over 2500 ingredients, what their sources are and how they are used.  I read a review of this new book on Our Hen House several weeks ago and I immediately added it to my wishlist.  As I read the review, I remember thinking "this is truly an invaluable resource."  Weeks later, when I was asked to review this revolutionary new book, I jumped at the chance.

What surprised me the most when I first received Veganissimo A to Z was its size!  I was expecting a large book but it is actually small enough to pack into my purse- how convenient is that?  No more spending too much time trying to research an ingredient on my phone because now I have my little guide at arm's reach.

I probably spent a good hour flipping through the book.  I thought I had a firm grasp on general uses for animals and even some of the lesser known uses, but I was stunned to see how many different animals are exploited for the most ridiculous things.  Every few minutes, I was exclaiming to Chris something like "Can you believe people kill sea turtles for the oil from their genitals?" and "Why on earth would anyone decide to kill a marmot and put it in hair conditioner?" and "What is wrong with people?!!"  I was also amazed by several ingredients I had never heard of before and never would've thought to be animal-derived- Margarita Powder (derived from ground pearls), Oak Apple (outgrowths of oak leaves, caused by wasp eggs and their larvae), or Apis Mellifera (whole honey bees) just to name a few.

Veganissimo's biggest strength's, in my opinion, is how for every ingredient, they use symbols to indicate all possible sources (plants, animals, synthetics, minerals, etc.) and by the color of each symbol, you can see if it is predominately used or just sometimes used (for example, Retinyl Acetate is usually synthetic, but can sometimes be from an animal).  There is also a guide at the end of the book, describing how to choose plant-based food, clothes, cosmetics, and cleaning products.  For the newly vegan and the not-so-newly vegan or just the conscious consumer, this book is a godsend, helping us not to be perfect, but to be able to make the most compassionate choices possible.

The publisher, The Experiment (find them on Facebook and Twitter too), was kind enough to offer a copy  of Veganissimo A to Z to giveaway to one of my readers.  To enter, all you need to do is leave a comment answering "What animal-derived ingredient were you most surprised to learn about?" (be sure to note that you commented in the box below).  For additional entries, you may follow the instructions in the box below.

Thank you so much to The Experiment for providing me with a copy of this extraordinary book!

Disclaimer: I was given a copy of this book to review, but all of the thoughts and opinions are my own.