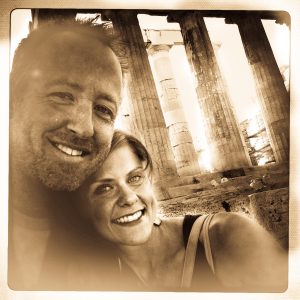 I am a quiet person by nature.  Some might even call me “shy,” though I mostly just feel quiet.  If you were to meet Chris and I, Chris would be the one wowing you with his conversational abilities and making you laugh.  I would pipe in and laugh right along with you guys, but leading a conversation (unless I’ve known you for a long time) is not something I usually feel comfortable with.  Don’t get me wrong- when I’m around my friends, I can be very talkative and fun and frankly, a complete goofball.  It’s just that “reaching out and getting to know someone new” part.  Being social has just never been something that has felt completely natural for me (except for this brief period in middle school when I got really loud and obnoxious and was actually voted most spirited by my eighth grade class.  Sigh, adolescence.).

The gal who gave me a MySpace page and a ridiculous nickname.

With this in mind, it’s understandable that social media has never been my forté.  I was the last person in the universe to get a MySpace page (which was a direct result of drinking entirely way too much champagne one New Year’s Eve.  It was the same night that I earned an embarrassing nickname, which perhaps I’ll share with you at a later date.).  I only joined Facebook to stay in touch with people I met while overseas (they had no idea that MySpace even still existed.  And this was five years ago).  When I moved back to the U.S. and began personal training again, I remember one of my clients, a wealthy older gentleman, telling me that he had just invested in his friend’s son’s new social media company.  He said “I really don’t know that much about it.  It’s supposed to be like Facebook, but it’s all status updates.  It’s called ‘Tweet’ or something like that.”  I laughed and thought to myself that he had just made a ridiculous investment.  When twitter became the next big thing, I probably felt the same way that people who scoffed at the idea of the internet did.  I never joined Twitter because it was just too overwhelming to me.

Starting Keepin’ It Kind began a new chapter for me.  I found myself getting to know fellow bloggers online and connecting with people in a way I never had before.  It has truly helped me open up.  Even as I write this post, I feel pretty vulnerable discussing one of my weaknesses, but a year ago, I never would have thought that this would be me today.  I like this new strength that I’ve built and so instead of shying away from a vulnerability, I am challenging it. 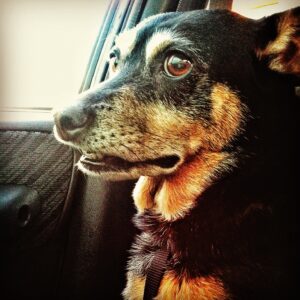 My dog making funny faces- there’s more from where this came from on Instagram!

Several months ago, I joined instagram, and found a form of social media I could get on board with.  Pictures of peoples’ pets and food?  Sign me up!  Perhaps it is because I’ve become so comfortable with instagram, or maybe it’s because a few people have told me that I was missing out by not being on Twitter, but my friends, I have finally joined the 21st century: I got a Twitter account.

As I said, this is a difficult thing for me and I’m doing my best to get a handle on it all, but my goal is to turn this social media fear/shyness/weakness into a strength.  I would love it if you would follow me on Twitter, and if you haven’t yet, check me out on Facebook, Pinterest, and Instagram too!  2013 is the year Kristy Turner becomes a social media butterfly (or, at the very least, becomes proficient at using them all)!

Thank you so much to all of you for your continued support- every comment you make literally makes me shine.  🙂

41 Responses to "Being Social"