One day, shortly before my 23rd birthday, I was driving to work in the early morning hours.  It was warm and I was wearing running shoes, black cotton shorts and a blue t-shirt with some sort of cute saying on it (like "Denver is for Lovers" or something like that)- my normal work attire.  I had a client at 5:30 am at the private personal training studio I worked at and it was about 5:25.  I was going to be there right on time, if not a minute or two late, but I knew my client wouldn't mind because he was probably going to be late as well (he always was).  Still though, I hated being late and just the thought of it was stressing me out a little bit.

I was just driving along, going about 45 mph, which was the speed limit.  I knew better than to speed on this expressway- there were speed traps everywhere.  I followed the bend in the road and then the next bend and then the bend after that.  As the next bend approached, however, I tried to turn my wheel to the right slightly, just to follow the curve of the road, but my steering wheel wouldn't budge.  The next thing I knew, I was driving on the center divider of the expressway, about to drive off into oncoming traffic (though at this hour of the morning, there were very few cars on the road).  I tried relentlessly to pull my steering wheel to the left without success.  I tried to slam on the brakes but those weren't working either.

The next thing I knew, I was spinning.  Or my car was, rather, and it was spinning fast.  I was only spinning for what seemed like a moment, but I remember thinking "If my dad were here, he would know what to do."  And then the car stopped.

Relieved, I thought to myself "Whew, I got the car to stop."  I looked up and noticed my cracked windshield.  "Ok, I can deal with that," I thought, but then I noticed just in front of my car stood a light pole.  I sat up to look at the front of my car and found that it wasn't touching the pole.  "That was a close one!  Good thing I got the car to stop.  It's fine.  I'll just back-up and drive to work."

I pulled my phone out of my purse that was nestled in the center console and called the studio.  My boss answered. "Hi Spencer, I'm going to be a little late.  Can you tell Gordon I'll be there in a few?"

"Sure.  Is everything okay, Kristy?" Spencer asked.

"Yeah, yeah.  I got into a little accident, but I'm totally fine.  I'll-" I stopped.  There was a man knocking on my window.  "Hold on a sec," I told Spencer as I rolled my window down.

"You need to get out of the car, Miss.  Your car is leaking a lot of fluid," the man told me.

I was irritated.  I was just trying to get to work.  "Spencer, there's a guy telling me I need to get out of my car.  Apparently my car is leaking fluid," I said while rolling my eyes.  I switched the phone to my left ear so I could grab my purse.

"Are you sure you're okay, Kristy?  You're not hurt?" Spencer asked.

"No, I'm fine."  Then I noticed my right hand, clutching my purse, was covered in blood.  "Well, actually my hand is bleeding a little, but it feels fine."

"Miss, it's not your hand that's bleeding," the man outside my car (who would not mind his own business) told me.  "It's your head."

Spencer must've heard him because he started asking where I was.  I put my hand back to my head and felt the mass of warm, sticky blood pooling under my hair.  I pulled my hand down to see that it was now covered in more blood which was dripping down my arm.

"Miss, you need to get out of the car now," the nosy man told me.  I was confused.  My car just spun out.  Why was my head bleeding?  I looked to my right to grab my purse and that's when I saw the tree that was standing where my passenger seat should've been.  Air bags had apparently gone off and were tangled around the tree.  My head began to pound.

The nosy man pulled me out of my car and brought me to the curb to sit down.  I kept looking at all of the blood that was starting to dry up on my arm.  I was so confused.  I didn't remember hitting my head.  Come to think of it, I didn't even remember stopping.  I just remember being still suddenly.  I looked at my young, four-year old car a few feet away, bent in half and wrapped around a tree.  The last payment on my "new car" was due that day.

The police arrived and began asking me questions.

"How old are you," the officer asked while examining my driver's license.

I looked up to see a fire truck coming from the direction that I'd been headed, only he was driving on my side of the road.  "Oh crap!" I exclaimed.  The officer looked at me and I told him "That truck is driving on the wrong side of the road!"  I began to panic and he assured me that it was okay.

I was briefly looked over by the firemen before the ambulance came and two more men put me on a stretcher and lifted me into the back of the ambulance.  As they took me to the hospital, these were my thoughts: "Great.  I'm going to miss work today.  That's one day of pay that will be missing from my paycheck.  This is just great.  And all of those flowers I picked up from Home Depot last night?  I guess I won't be planting them today.  They're probably going to die in this heat and I'll be out $50.  This is just wonderful."

Later, in the hospital, when the doctor told me that they were going to have to shave the area of my head where it had busted open in order to put staples in, I cried.  "You're going to shave off hair?  It's taken me so long to grow it out to where it is!"  I was furious.  The fact that besides my head being cracked open, I was fine, didn't even register.  I was so furious that on top of the already terrible day I was having, they were going to shave a patch of my head.  "Story of my life," I thought.

The next day, covered in bruises from head to toe, and blood still caked into the parts of my hair that I wasn't able to clean in the sink (I had been prohibited from getting the incision wet for 48 hours), two of my friends took me to gather my belongings from my car at the lot it had been towed to.  I got in through the driver's side and tried to pry open the glove compartment.  I managed to pull a few things out, but decided to leave the rest behind.  My friends were standing on the passenger side of the car and I walked around to see what they were looking at.  There were pieces of tree trunk embedded into the side of my car.  Chad, one of my friends, began to pick the pieces out.  We joined in as well.  It was then that I began to realize that had my car spun just 180 degrees more, I wouldn't be there to be picking bark out of the side of my car.  The driver's side of my car would've been wrapped around the tree and I wouldn't be with my friends that day.

A couple weeks later, for my 23rd birthday, I came home from work to find that about 5 or 6 friends, a group of guys that I had known since high school, had planted me a rose garden in my backyard to replace the flowers that I had been unable to plant.  I cried the greatest tears of joy (and truth be told, I'm crying as I write this) because it was a reminder of how blessed I was to be alive.  It doesn't matter what happens as long as you're alive to experience it.  Everything will work itself out and happen just as it was meant to.

That day, I began a ten year journey of remarkable growth.  I came out of a depression that I'd had since I was 14.  I adopted Samantha.  I learned to stop worrying about being skinny and focus on being healthy which ultimately led me to becoming vegetarian.  I got married.  I got divorced.  I sold everything I owned.  I travelled solo through Europe for nearly a year.  I began writing.  I lived in another country.  I stopped sweating the small stuff.  I stopped planning so much.  I moved home.  I moved away again.  I followed my dreams.  I tried out different jobs.  I stopped having expectations.  I had amazing times with old friends and made many incredible new friends.  I met and fell in love with Chris.  I got married again.  I realized how much I loved being alive so I went vegan to stop denying other living beings the simple joys and happiness that life can bring.  I began living my life in accordance with my ethics and found the greatest peace that I've ever known.  I started Keepin' It Kind.  I've made mistakes and learned from most of them.  I've laughed more than I've cried.  I've really lived.  I've loved being alive. 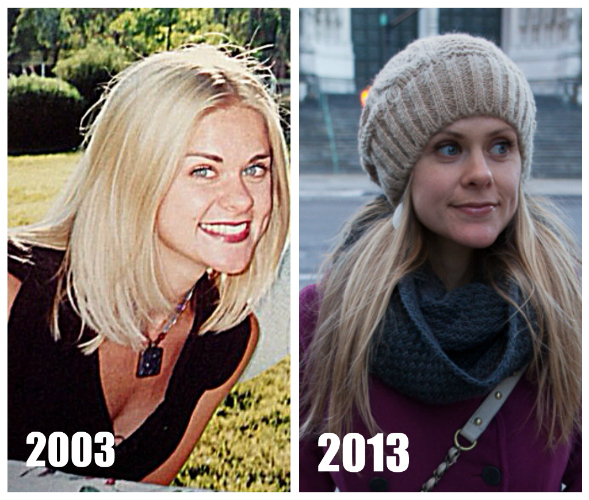 Today, I turn 33.  The person I am now is so far different from the 22 year-old in that car.  I am so thankful for every twist and turn my path has taken because they have all led me right to where I was meant to be: right here, right now, and enjoying every second of it.

Instead of birthday well-wishes (as much as I love them), I would love for each of you to be thankful for your lives today.  Take a moment to enjoy being alive.  If you aren't already vegan, please consider being vegan for today in an effort to let all other living beings enjoy their right to be alive.  Thank you for joining me in celebrating life today.  It really means the world to me.  Much love to you all!

What are you loving about being alive right now?