I am so excited about this installment in the “My Vegan Story” series!  When I first became vegan, Cadry’s Kitchen was one of the first that I turned to for help during the transition.  Her Open Letter To A New Vegan felt like it was written just for me.  Her humorous and eloquent writing style along with her simple, yet delicious recipes kept me coming back for more.  It is such an honor that, during this month of my 2nd veganniversary, one of my first vegan inspiriters is here sharing her own vegan journey.  Please welcome my dear friend, Cadry Nelson, to the blog today.  I know you’ll find her as amazing as I do. 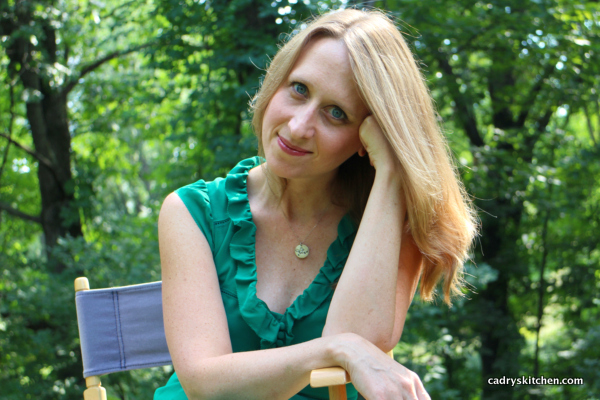 Thank you, Kristy, for having me on your blog today.  In addition to being a remarkable voice for the animals, I’m lucky enough to call Kristy a friend.  After following her fantastic blog for a long time, I was able to meet Kristy in person last April in Los Angeles and then reconnected at Vida Vegan Con in May.  She oozes all of the warmth and positivity that you would expect from reading her blog.  Meeting her was one of those instant connections, where you just know that you’ll be friends for a very long time.  It’s a treat to be here today on Keepin’ It Kind!

My transition to veganism was kind of like that board game Life.  There were many stops along the way, each one moving me forward slightly, until my little pink peg person had her car pushed to the final destination.  Each step was important, but looking back, I wish I’d taken a more direct route.

When I was in high school, I met a vegetarian for the first time.  I cared deeply about animals, and so I decided that I would give vegetarianism a try too.  At that point I was 14 or 15, and the only things that I knew how to cook were ramen noodles from packets, Doritos with melted Velveeta in the microwave, deli sandwiches on white bread, Gino’s Pizza Rolls, and big chef salads with ham, cheese, and iceberg lettuce covered in parmesan dressing.  I gave up on vegetarianism almost as quickly as I’d started, not knowing how a person makes a salad without ham.

Over the 15 years that passed between first meeting a vegetarian and going vegetarian myself, it was something I’d think about every now and again.  That thought was fleeting, though, as I really liked the taste and texture of animal products. I grew up in a very meat-and-potatoes household, and those were flavors I enjoyed and associated with home.  One of my favorite pastimes was grilling out with steaks and hamburgers.

But there were moments when I’d see blood pooling around the plate of the steak from the grill or see feathers still visible on the chickens’ legs I was about to fry, and I would feel uncomfortable, unsure if I could eat dinner that night.  I didn’t like reminders that those legs used to belong to a real, living, breathing being.

I began moving in a direction of consciousness around what I was eating.  I read Fast Food Nation and watched Super Size Me and felt compelled to stop eating fast food.  I sought out so-called “humane” meat and felt like the higher price was worth it for what I thought were better standards for the animals.

Over time, I became more and more aware of the suffering involved in killing someone else for food.  I learned that “humane meat” is an unregulated marketing term.  There are no guarantees about the lives the animals will lead or how much space will be afforded them, and there is one certainty – their deaths are not painless or without fear.  Like all of us, the most basic thing that animals want are their very own lives.  With so much pain in the world, I just didn’t have the stomach anymore to contribute to the suffering of others when I had another choice.

I watched Meet Your Meat online and saw with my own eyes the ways that animals suffer on their way to becoming someone else’s dinner, and I had the realization that it didn’t align with my own values of compassion towards animals.  I didn’t want to propagate more pain into the world if I could help it.

I was vegetarian for almost two years before I went vegan, and during that time I was learning everything that I could.  I read Food Revolution by John Robbins, The China Study by T. Colin Campbell, and I voraciously listened to every podcast episode of Vegetarian Food for Thought by Colleen Patrick-Goudreau.

Ultimately, it simply made sense to extend my compassion to cows, goats, and sheep used for their milk, the male veal calves who are the byproducts of the dairy industry, egg-laying hens, and the male chicks of the egg industry who are killed upon hatching.  After learning about the cruelties that exist in the dairy and egg industries, veganism seemed the next logical step.

A film that I would recommend is Peaceable Kingdom: The Journey Home.  I saw it after I was already vegan.  It is incredibly moving and a testament to the idea that inspiration for change can be found in the most unlikely of people and places.

WERE YOUR FRIENDS AND FAMILY SUPPORTIVE OF YOUR CHOICE TO GO VEGAN?  IF THEY WERE NOT SUPPORTIVE, HOW DID YOU DEAL WITH THEM?  ARE THEY MORE SUPPORTIVE NOW?

When I went vegan, I didn’t know any other vegans.  My husband, David, had gone vegetarian by that point, but everyone else I knew ate animals.  I don’t remember anyone being excited that I was going vegan.  Some people were neutral about it, and to my surprise, some people were quite hostile.  Since no one had much of a reaction when I went vegetarian, I expected the feedback to veganism to be the same.  However, I think that people experience veganism as a much bigger statement than vegetarianism, and the reactions that I received backed that up.

There were a few people in my life who were defensive, argumentative, and dismissive.  That was tough for me to maneuver.  I don’t like confrontation, and it felt attacking and personal.  That period definitely required renegotiating within some relationships.  It’s kind of like when someone wants to start a new habit like exercising or doesn’t want to go the bars any longer.  Their old drinking buddies may not be as happy about the change, and they may even become defensive or try to talk the person out of it.  It doesn’t mean that the person who wants to adopt those new habits is wrong or that the relationship won’t recover, but it does mean that some of their old relationships will have to be renegotiated.

When I think back on it, it’s as if I was connected to those people through fiberglass pipes.  There had never been water running through those pipes, and so I hadn’t paid much attention to if there were any cracks.  But when I added the rush of veganism through those pipes, it made it clearer where there were bigger issues in the relationship in terms of respect, being heard, and being taken seriously.  Going vegan was the way I discovered that a few of my relationships had to be re-worked or even retired.  It showed me where there were imbalances and where I needed to stand up for myself.

I would say that I’m really fortunate now in terms of how accepting and respectful people are in my life.  While I have vegan friends in other states, right now the only vegan I spend time with in my town is my husband.  So it makes me feel loved and valued when our non-vegan friends and family make us dinner or go with us to a vegan restaurant.

I have now been vegan for over six years.

The thing that I love most about being vegan is the connection that I feel to other animals.  When I visit animals at sanctuaries like Farm Sanctuary, I feel an incredible connection and sense of peace.  It feels tremendous to enjoy every meal without a cloud of guilt hanging overhead.  There’s no blood on my plate or feathers from which to recoil.  My food is colorful, full of life, and it makes me feel vital, awake, and alive.

Even better, it’s something that I get to share with my husband, David, who went vegan a few months after I did.  We get to share our mutual love of animals together, and there’s nothing more attractive to me than a person who is kind.  David is such an animal lover and his kindness is palpable.  To see that in him makes me love him even more.  We enjoy traveling, discovering vegan restaurants in unexpected places, and finding solace in each other when we are reminded of the animals who continue to live and die in the animal industry.  It is definitely something that bonds us, and it’s an incredibly important part of our marriage. 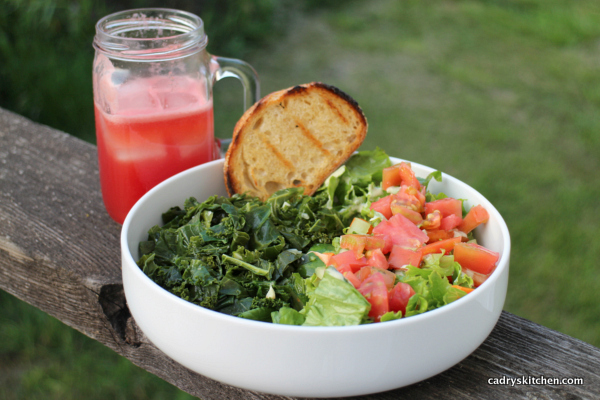 I try to make the world better for animals by speaking up for them in my life, writing about veganism on my blog, showing people that plant-based meals can be easy and delicious, and by being the best companion that I can to our cats, Spike and Jezebel.

That’s such a hard question!  If I had to narrow it down to just one thing, my favorite vegan recipe would be my Black Bean Taco Pizza.  Taco pizza was always one of my favorite foods growing up, and even though we didn’t know each other back then, it was one of David’s too.  Taco pizza is a local favorite, and when we met in California, it was something David and I made together regularly.  After we went vegan, taco pizza was one thing we had to figure out how to veganize right away.

If I could give my newly vegan self one piece of advice it would be to relax and not get overwhelmed.  When I first went vegan, it felt like there was so much to figure out: which recipes to make, foods to buy, cleaning products that didn’t include animal ingredients, cosmetics that weren’t tested on animals, clothing that didn’t include leather, wool, or silk…  The amount of new habits I had to create felt overwhelming.  But after I figured out which cleaning products to buy, which cosmetics I preferred, and what to look for on labels, it didn’t take much longer to shop as a vegan than it did as a non-vegan.  (And besides, it’s not just vegans who should be conscious about what is going into their food, cleaning products, and what have you.)

From navigating my inter-personal relationships, to discovering how to cook foods that were new to me, to learning how to ask for vegan dishes in restaurants, the growing pains around veganism dissolve with time.  Then it just feels like the natural, ordinary way to live your life. 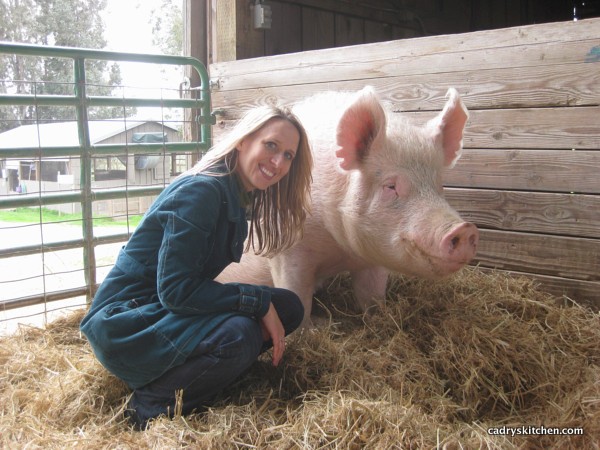 Thank you so much, Cadry, for sharing your vegan story.  Feel free to leave comments for Cadry below or if you want to check out more of the awesome ways she inspires people, you can find her here:

26 Responses to "My Vegan Story: Cadry Nelson of Cadry’s Kitchen"