We recently spent almost a week in Austin, Texas, living it up vegan-style. This is part 2 of our shenanigans. You should also check out Part 1.

We’d come to Austin for Vida Vegan Con and for my book signing event at BookPeople. By Friday, we’d been there for a day and a half and I hadn’t had a smoothie yet. Considering I have one every day back at home, I was starting to go through withdrawals so for breakfast on Friday, we decided smoothies were in order. 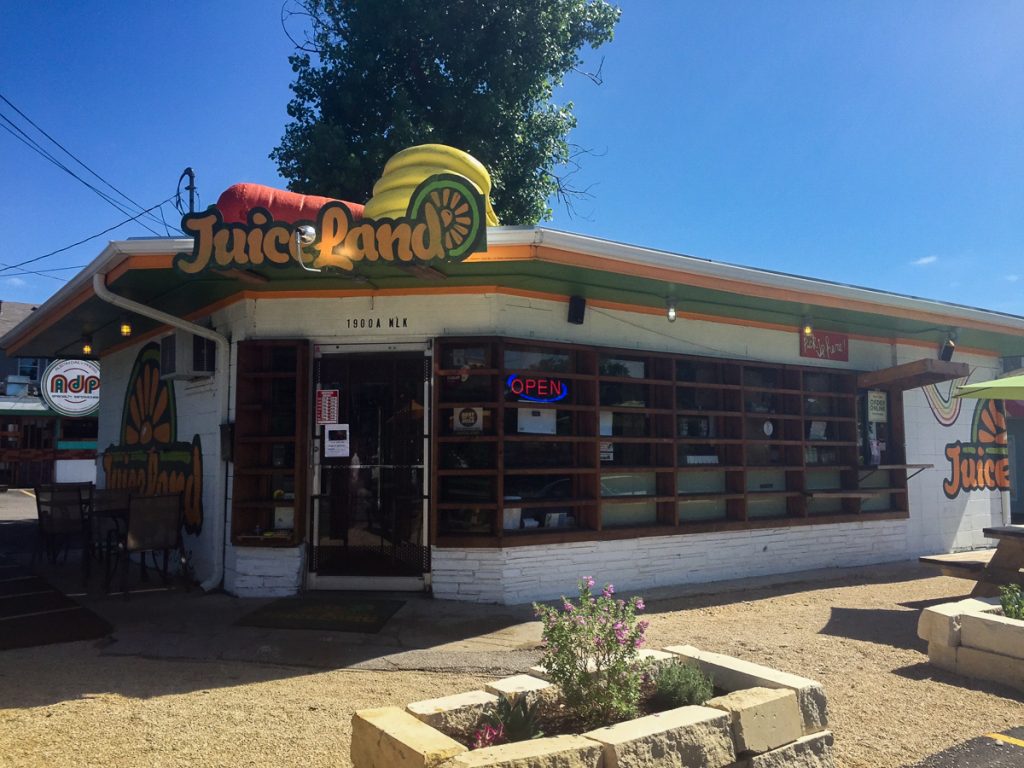 There are several Juiceland locations throughout Austin but all of them feature a great, mostly vegan juice and smoothie menu with plenty of vegan take-away food as well. We stopped at the one on Martin Luther King and Chicon because it was on the way from our AirBnB to the Marchesa Hall & Theater, where the VVC Bazaar was going to be. 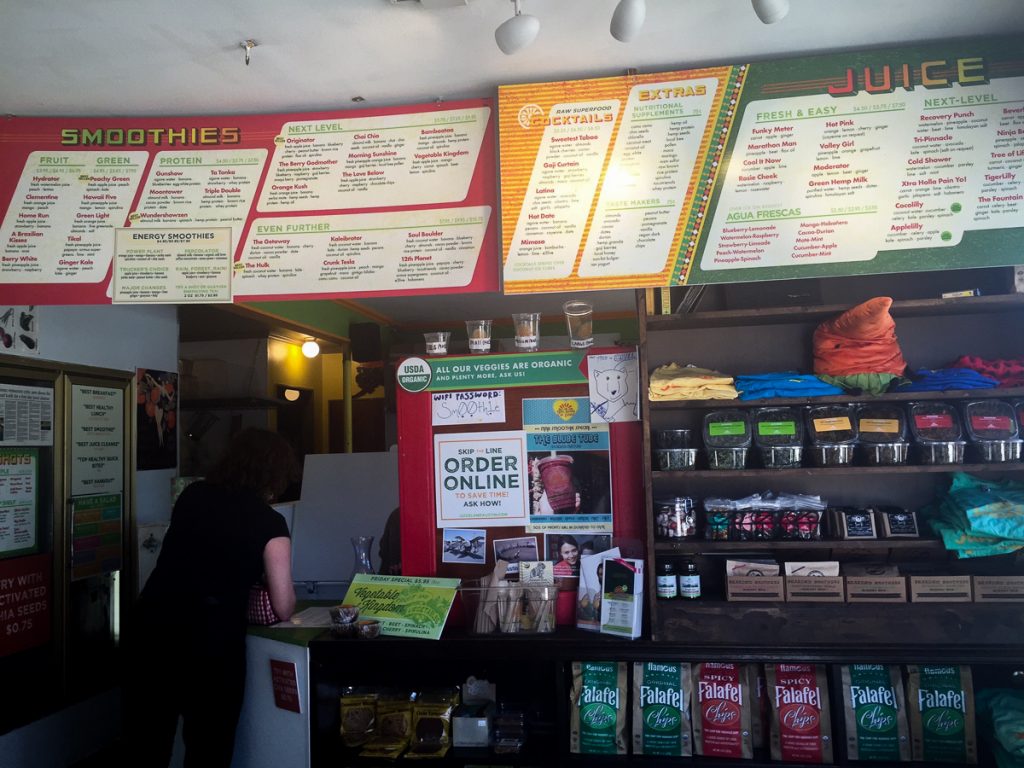 I’m partial to any smoothie that is green and/or has peaches so as soon as I saw the Peachy Green smoothie on the menu, I knew what I was getting. It is made with apple juice, peaches, kale, and spinach, and I added almonds and hemp seeds for a bit of protein. When it comes to smoothies, Chris will go one of two ways: It’s either going to be something berry or something chocolate. This time, he opted for the chocolate and went with the Moontower, with almond milk, banana, cacao powder, brown rice protein, and dates. On this warm Friday morning, these smoothies really hit the spot. We liked them so much that we ended up ordering them again two more times during our trip! 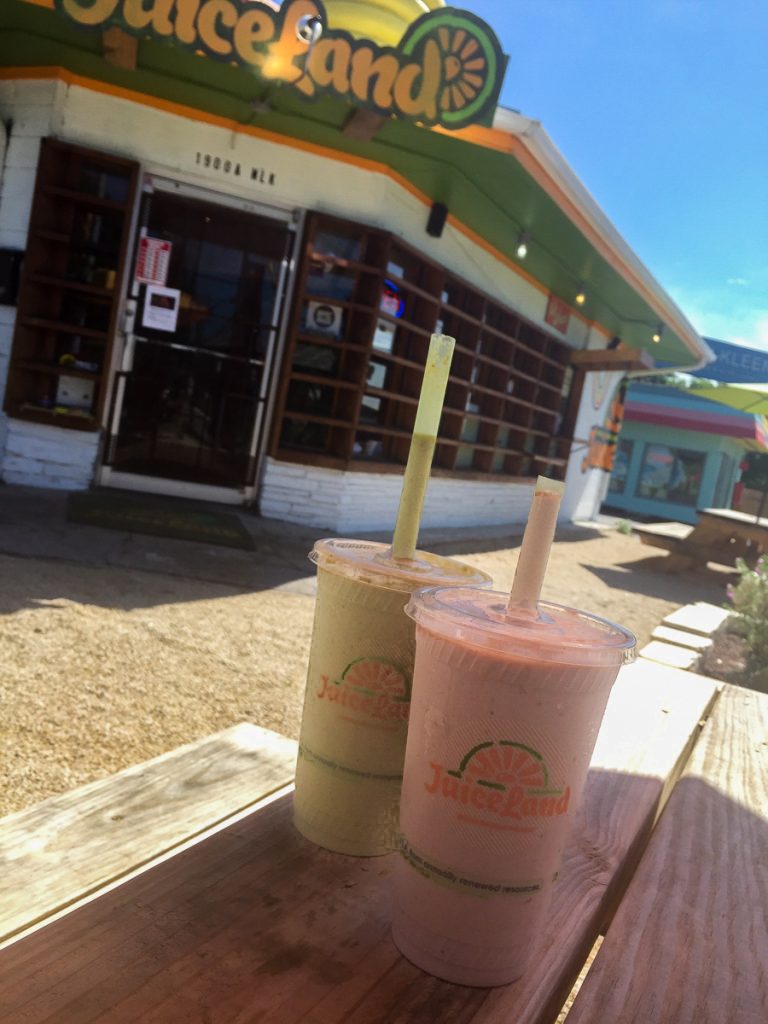 When we left the Bazaar, Chris wanted to go check out this vintage synthesizer shop across the street from Counter Culture (I think I’ve explained before his affection for synthesizers). So we did that and I did exactly what Chris does when I’m clothes shopping: I sat an looked at crap on my phone. It actually wasn’t crap that I was looking at- I was researching places to eat and I came across a few mentions of the popcorn tofu at Wheatsville Co-Op. Chris had eaten a Bacon Cheeseburger from Arlo’s food truck at the Bazaar but I hadn’t eaten since the smoothie (actually, that’s a lie- I’d had some of Miyoko’s cheese at the Bazaar and I sampled a few things from other vendors) so all this talk of popcorn tofu was making me pretty hungry. Once Chris was done, we headed back north to go to Wheatsville so I could get my popcorn tofu on.

I trotted into Wheatsville like a dog about to get a treat. I was so stoked as I peered into Wheatsville’s deli case. And then all the happiness drained from my body. The popcorn tofu was not gluten-free. I should have guessed being that the name of the place is Wheats-ville. I probably said “Ah, man!” about 9 times and wallowed in my sorrow for a bit, and then I moved on to their prepared foods case to see what I could eat. Wheatsville did have a lot of vegan options, and it was great to see, but I was still sad over the popcorn tofu so I begrudgingly grabbed a spring roll from the shelf and two vegan, gluten-free desserts, a pumpkin chocolate chip cookie sandwich and a homemade chocolate peanut butter cup and said, like a spoiled child, “I guess this will do.” 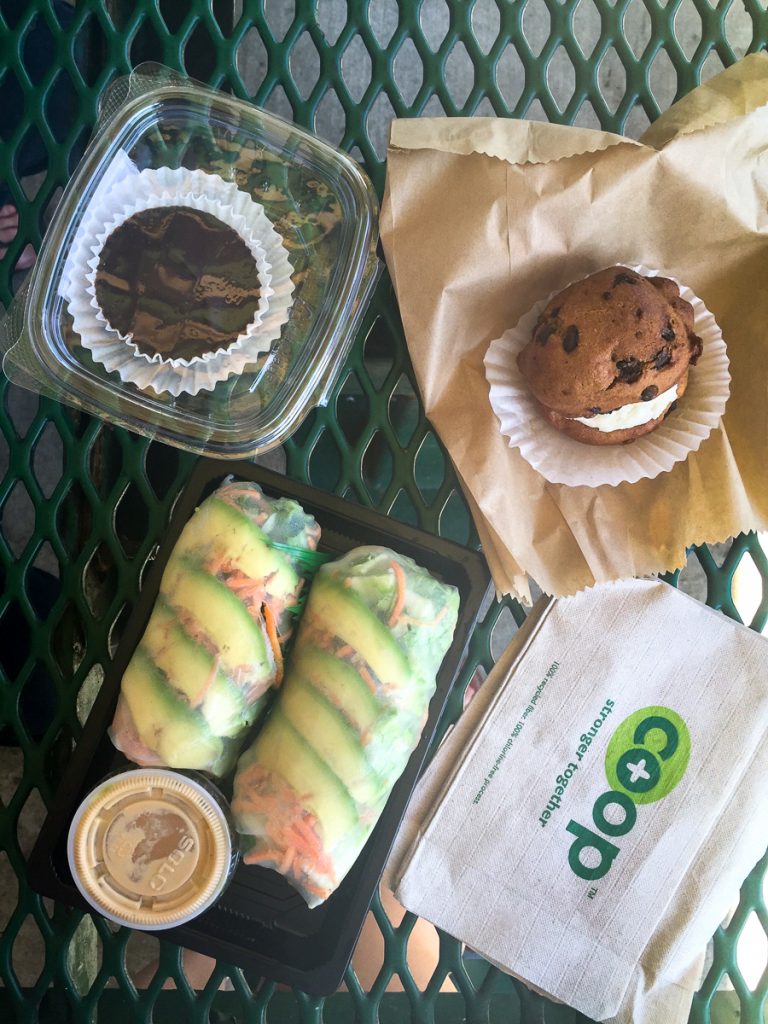 We went outside to eat. The spring roll was mostly lettuce but it was still good. I was thankful it was so light because I knew I wanted to save room for dinner later. Chris and I split each of the desserts and they were both pretty wonderful. So wonderful they made me mostly forget about the popcorn tofu debacle. I was still feeling a little sorry for myself, and I was tired from the heat, so we went back to our hotel to rest for awhile. And by “rest,” I mean watching Seinfeld re-runs until we heard from our friends about meeting up for dinner. 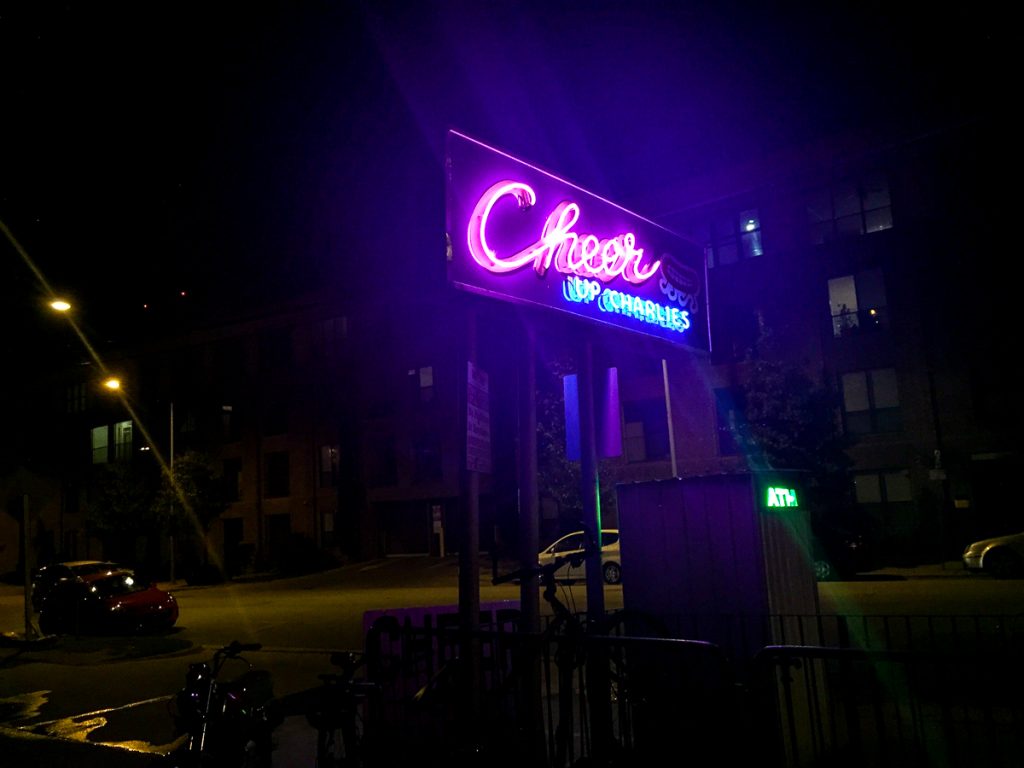 We picked up Sarah and Jess and met David and Cadry at Cheer Up Charlies, Austin’s only all-vegan bar. They have a great selection of local beers, fresh juice cocktails, biodynamic wines, and kombucha on tap. They have a stage indoors and outdoors for live bands. Outside, there’s a very laid back, casual vibe with plenty of places to sit and hang out. The vegan food truck, Arlo’s, is also located there so we ordered some food and found a table to sit at. 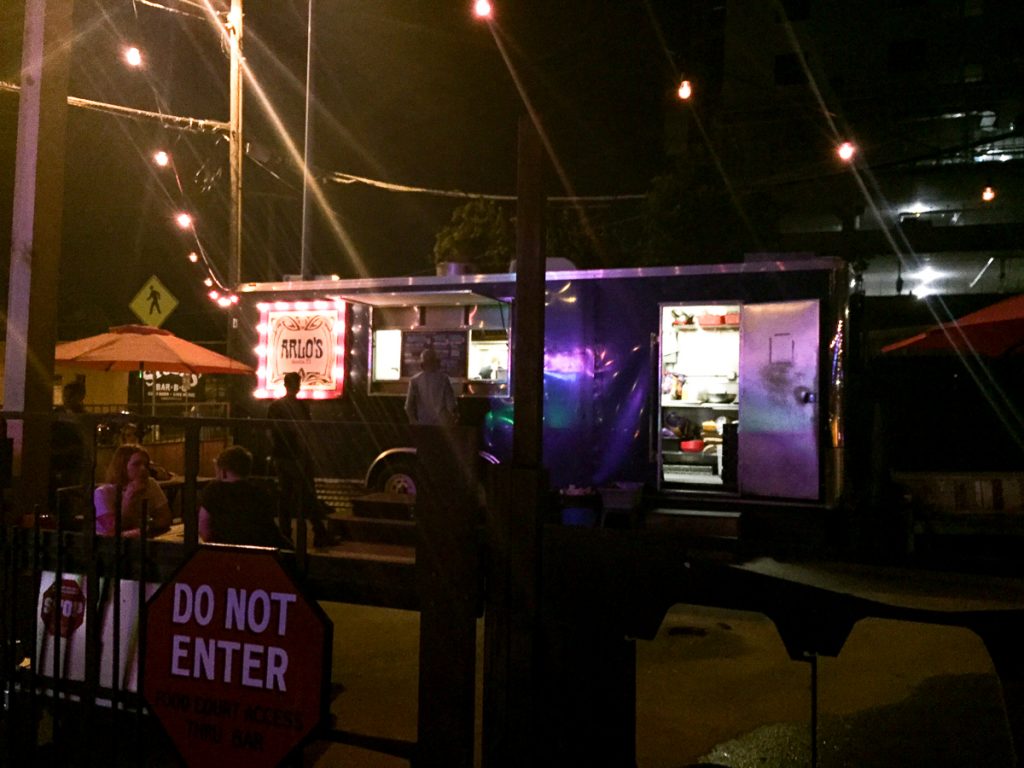 I could’ve ordered the Bac’n Cheeze Burger, which can be made gluten-free with a GF bun and by removing the seitan bacon, but I opted for tacos. Because it was Austin. They have a couple different tacos on the menu, but the Street Tacos, with house-made burger crumbles, pico de gallo, lettuce, and chipotle sauce, are gluten-free. I assumed that their set-up was similar to Bouldin Creek Cafe’s– where when the menu says “taco,” it meant one, singular taco. So I ordered two tacos, as well as some tater tots and chips and salsa to share with everyone. Chris also ordered 2 street tacos and Cadry ordered 2 of the other type of taco they offer. David ordered one taco. Imagine our surprise when our food came and we learned that “taco” actually meant “two tacos.” So we ended up with 14 tacos between the four of us. Shown below are just mine and Chris’s eight tacos. 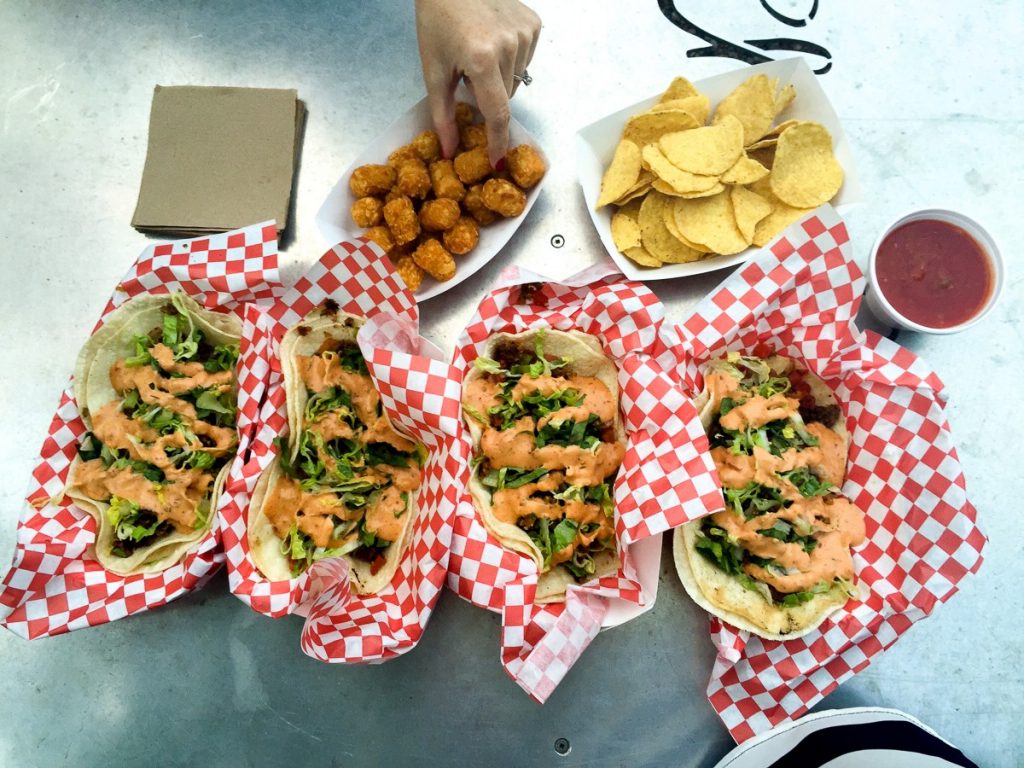 They were very good tacos, though, I only ate two because my stomach is only so big. My husband, on the other hand, thinking he had a much larger stomach than he did, finished off all four of his. This effectively ruined tacos for him for the rest of the trip. He couldn’t stand the site of tortillas and he grimaced every time someone even said the word “taco.”

We also went back to Cheer Up Charlies for a sort-of VVC farewell party on Sunday night. We really love it there, so much so that I wish I had a Cheer Up Charlies near my house. I just want to go hang there with friends, sipping cool drinks, and laughing a lot. Which is what we did when we were there. Chris and I just had wine, but our friends got what seemed to be really interesting cocktails (and they all really liked them). I can’t stress to you enough what a fun, relaxed, enjoyable place Cheer Up Charlies is. I highly recommend it.

After VVC on Saturday, there was a party at Capital City Bakery, a vegan bakery, celebrating its 3rd birthday. Ever since I heard of CCB, probably about 3 years ago, it has been at the top of my list of places to visit in Austin. I was interested in going to the party but when we got there, there was a line down the block to get in and it was also raining. That combined with the fact that I’d learned that the only gluten-free item they have is crispy rice treats (and sometimes cheesecake), I opted to bow out. We went out to dinner with friends and then went somewhere else for dessert. 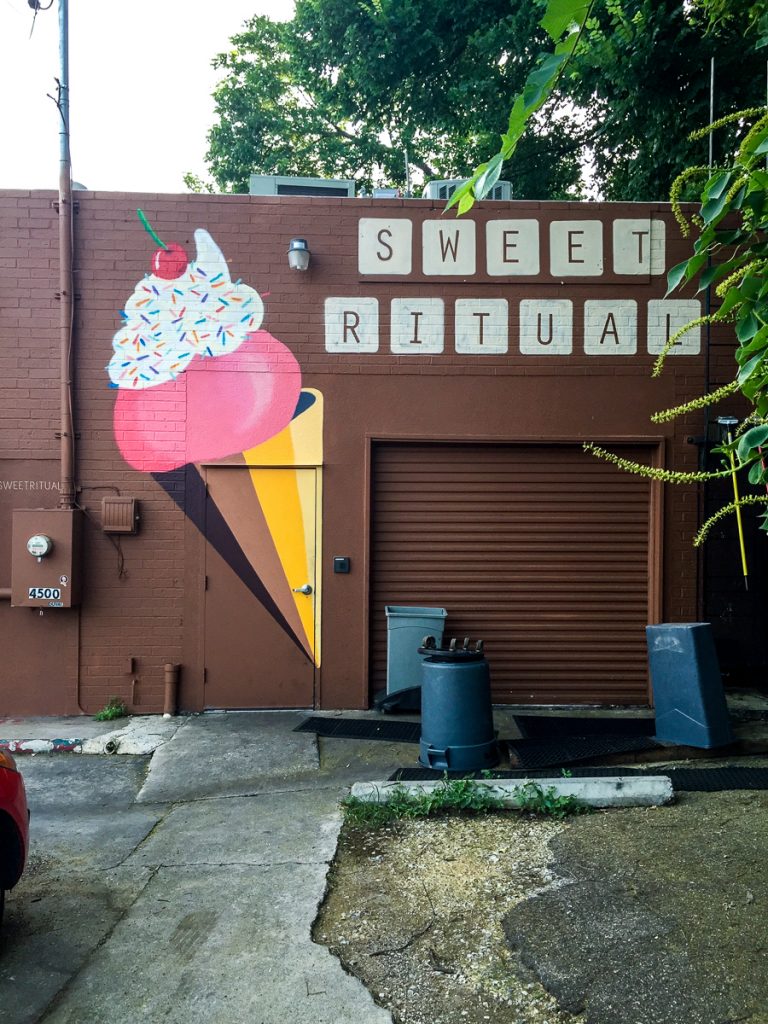 Sweet Ritual is an artisinal vegan ice cream shop. And it is amazing. It took me right back to being a kid at Baskin Robbins, with my nose stuck to the glass of the display case, trying to figure out what flavor I wanted. They not only offer about 16 flavors of ice cream, but there are a variety of shake, float, and sundae options. They have several types of cones, including gluten-free, and a trillion types of toppings. 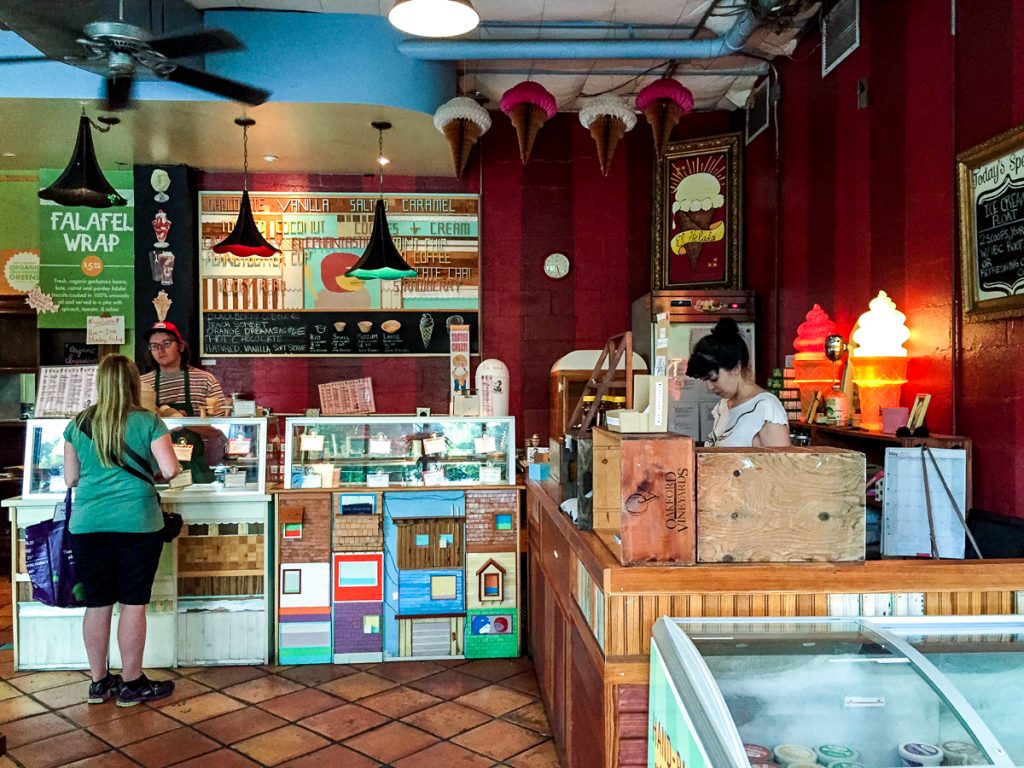 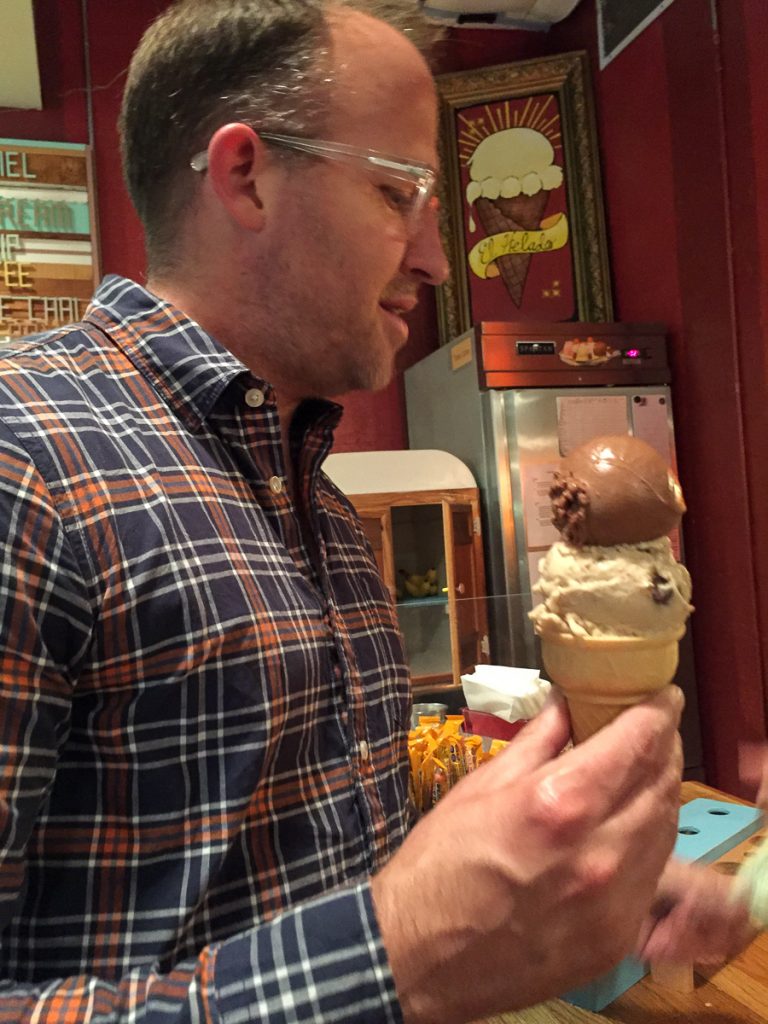 And it was some of the best ice cream we’ve had in our lives, vegan or not. It was so good, we had to go back on our last day there. We couldn’t leave without having one more taste of Sweet Ritual. This time, we each got Chocolate and Peanut Butter Cup, but Chris also got a scoop of Salted Caramel. I wish I could report to you on the other flavors but these were sooooo good. 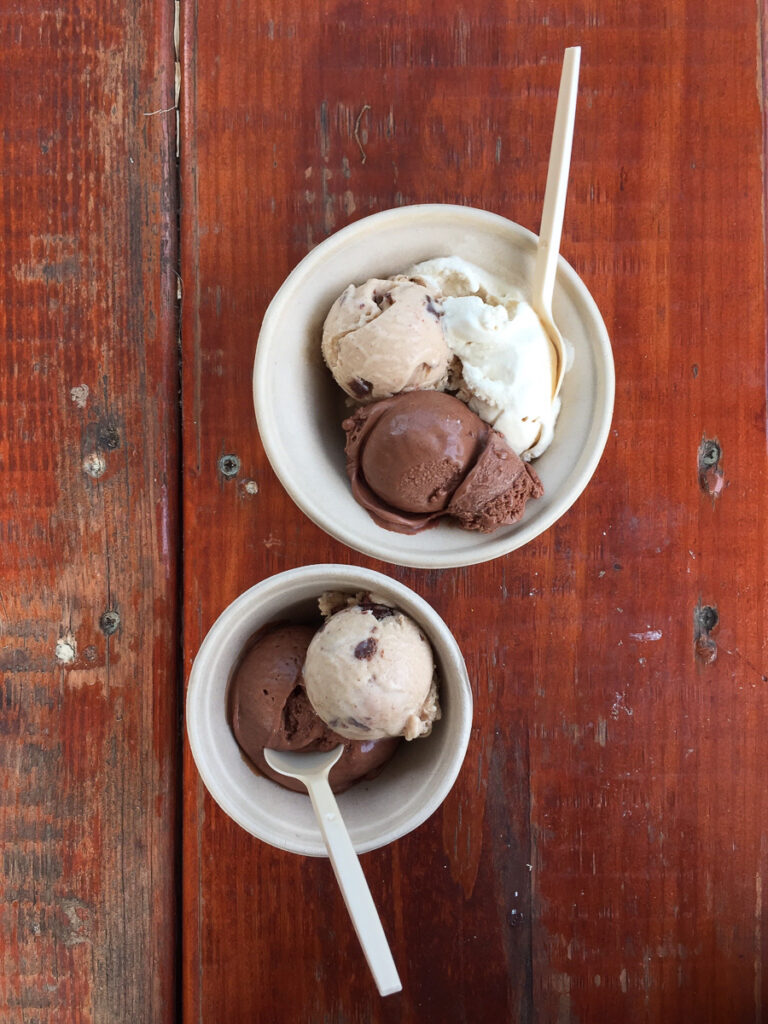 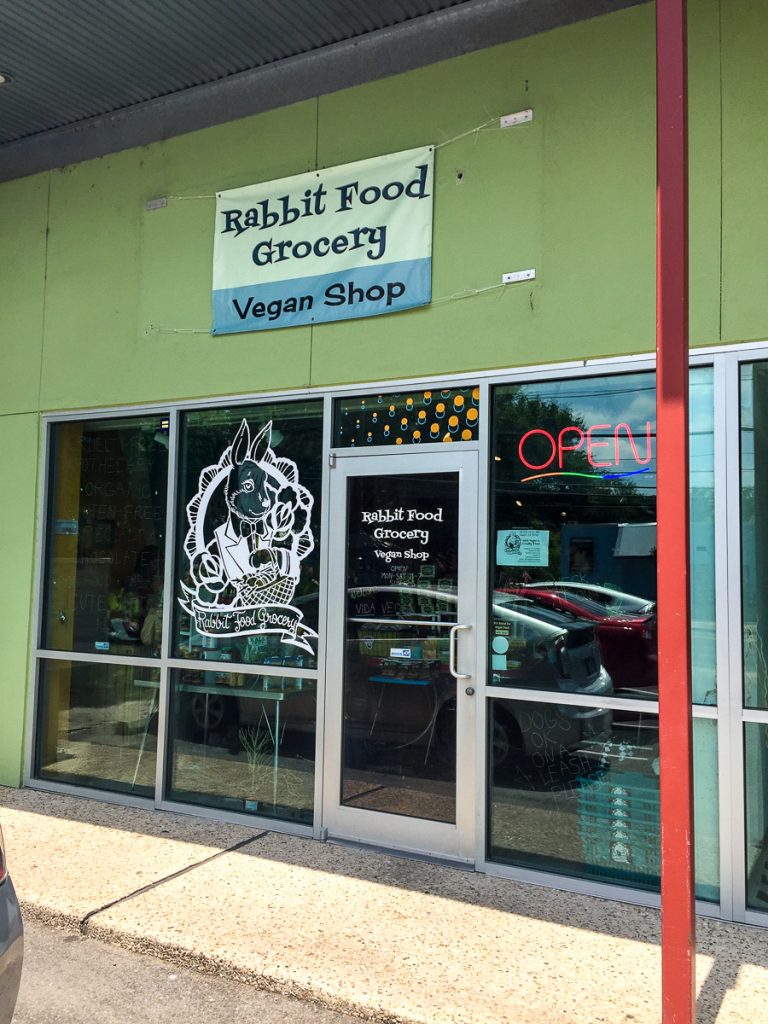 On our last day in Austin, we started with smoothies from Juiceland and a visit to Rabbit Food Grocery. I love all-vegan shops because it’s amazing to shop somewhere where you don’t have to check the labels. It’s neat to see all of the cool, vegan foods and products out there, but all lined up an shelves, next to each other. 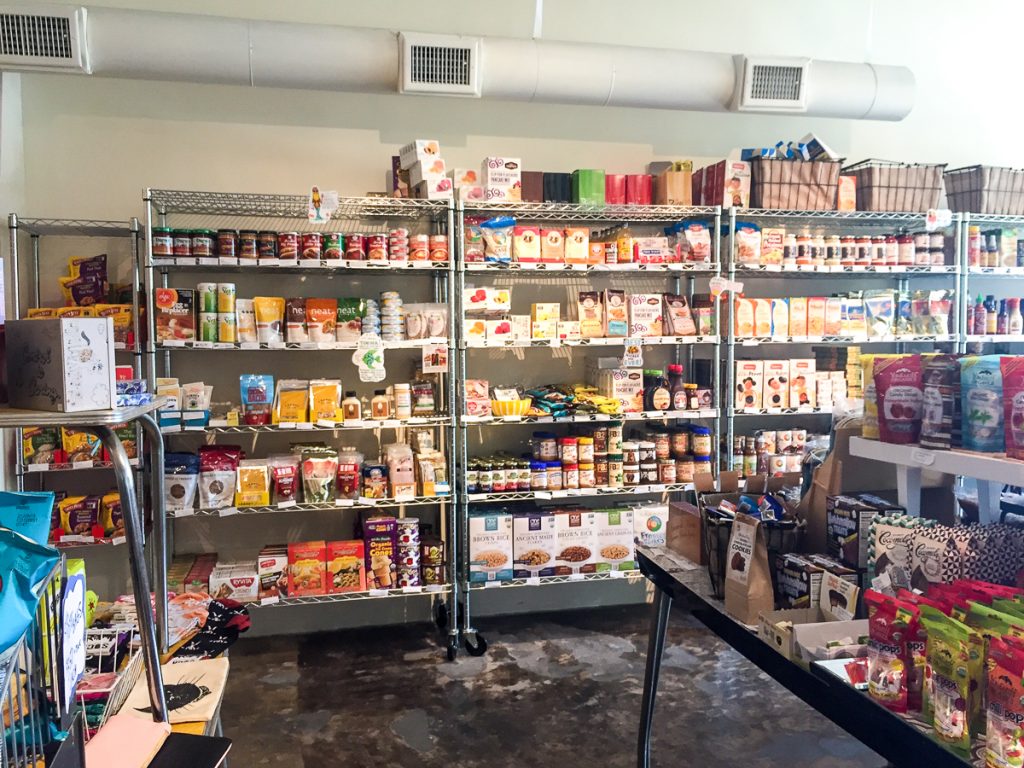 Rabbit Food Grocery had all of that, which was great, but what we especially loved were the non-food items. I enjoyed perusing the various bags, purses, wallets, clothing items, jewelry, baby products, and even stationary! The stationary was my favorite. 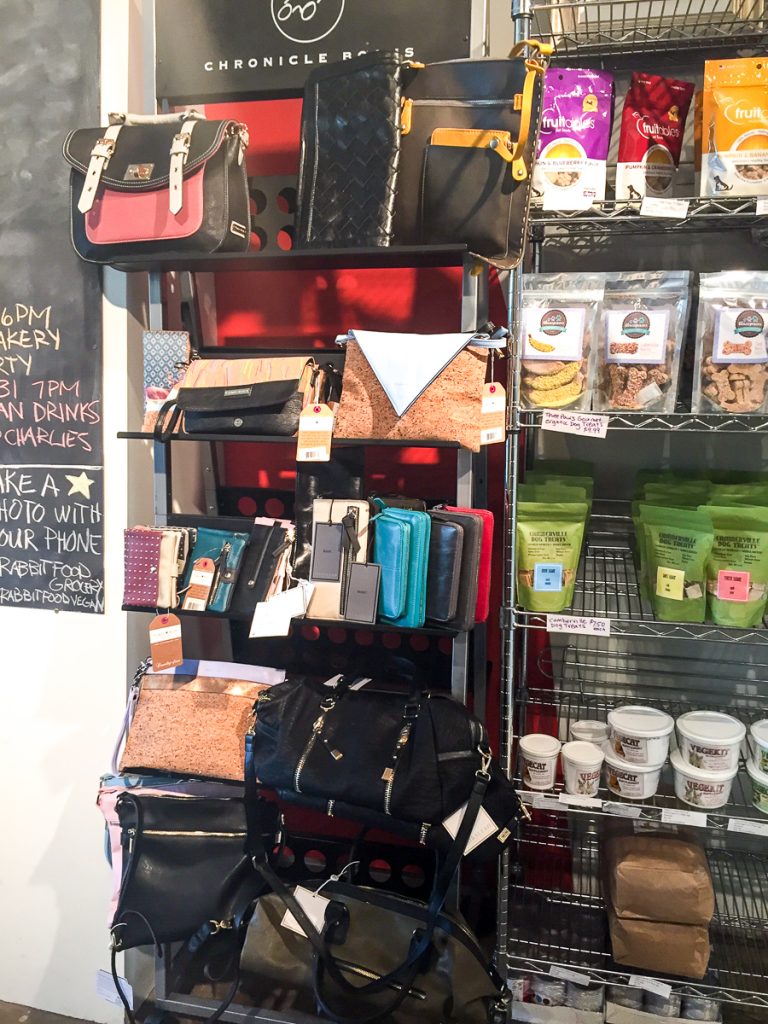 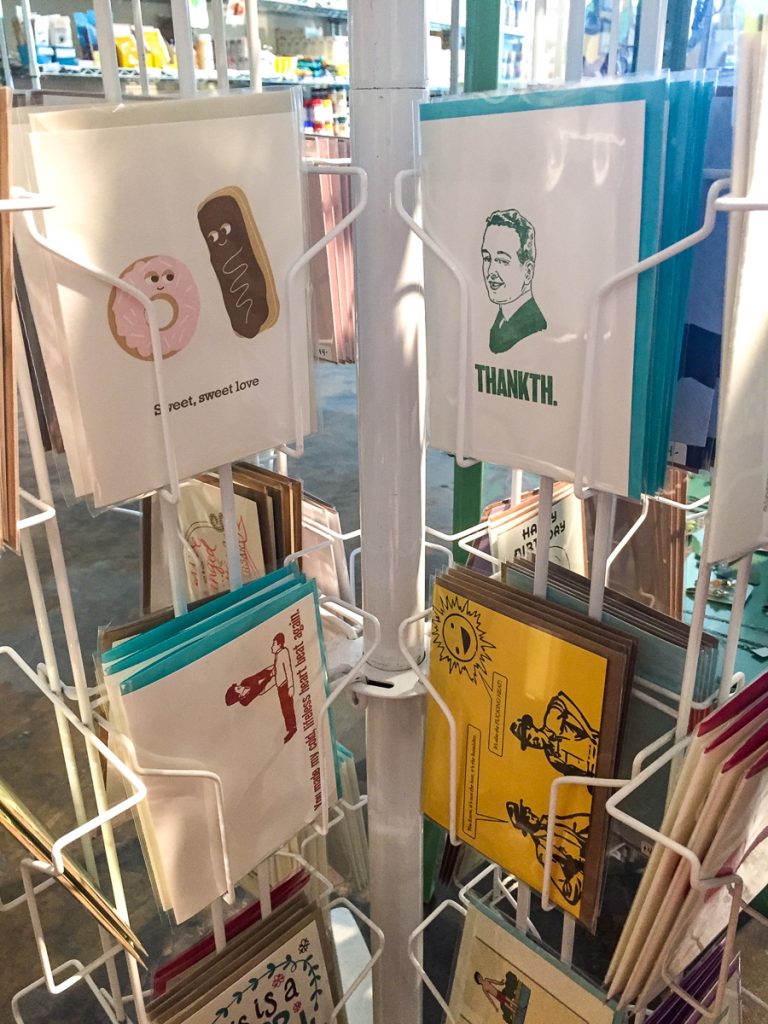 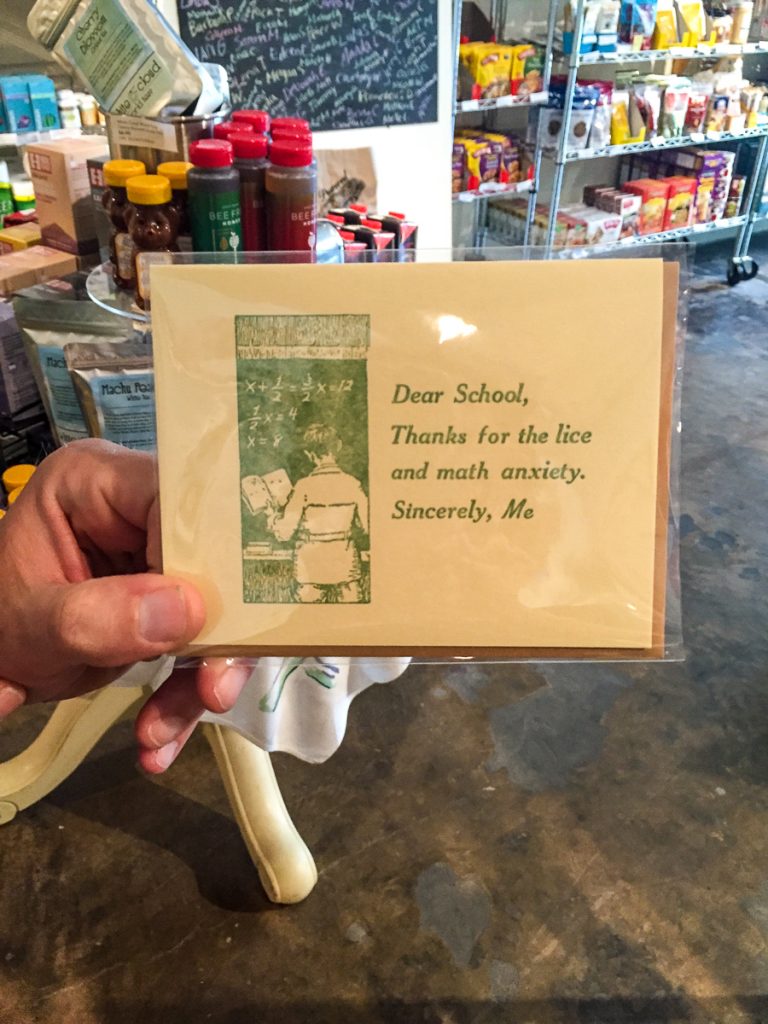 We bought a few things (that we realized later all happened to be chocolate) and ate them all before we could take pictures because sometimes there’s no self-control with chocolate. If you make it out to Austin, you definitely need to make a stop by Rabbit Food Grocery. 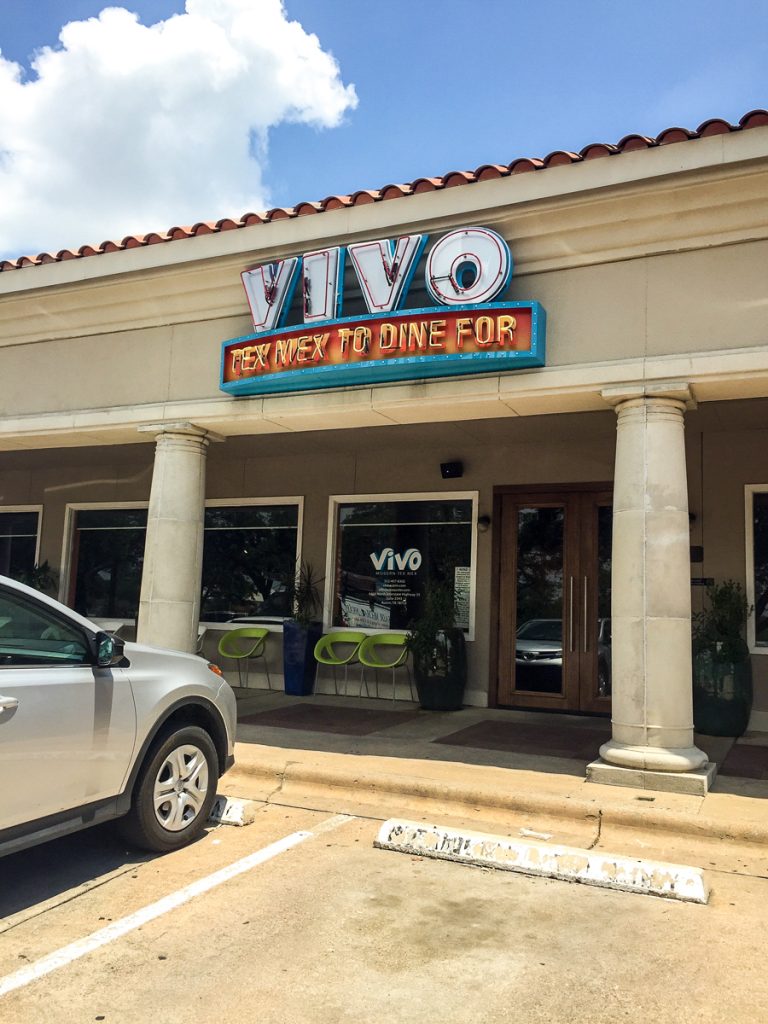 After Rabbit Food, we met up with Cadry and David before they hit the road to head back home. One of the things on Cadry’s bucket list for Austin were puffy tacos, and since they weren’t at all similar to the tacos Chris had OD’d on a few days earlier, we agreed. We went to Vivo to try their spin on vegan puffy tacos.

First things first- their chips and salsa are fantastic. They’re obviously deep-fried and all that but the chips were the crunchiest and best tasting I’ve ever had. I’m still thinking about them. 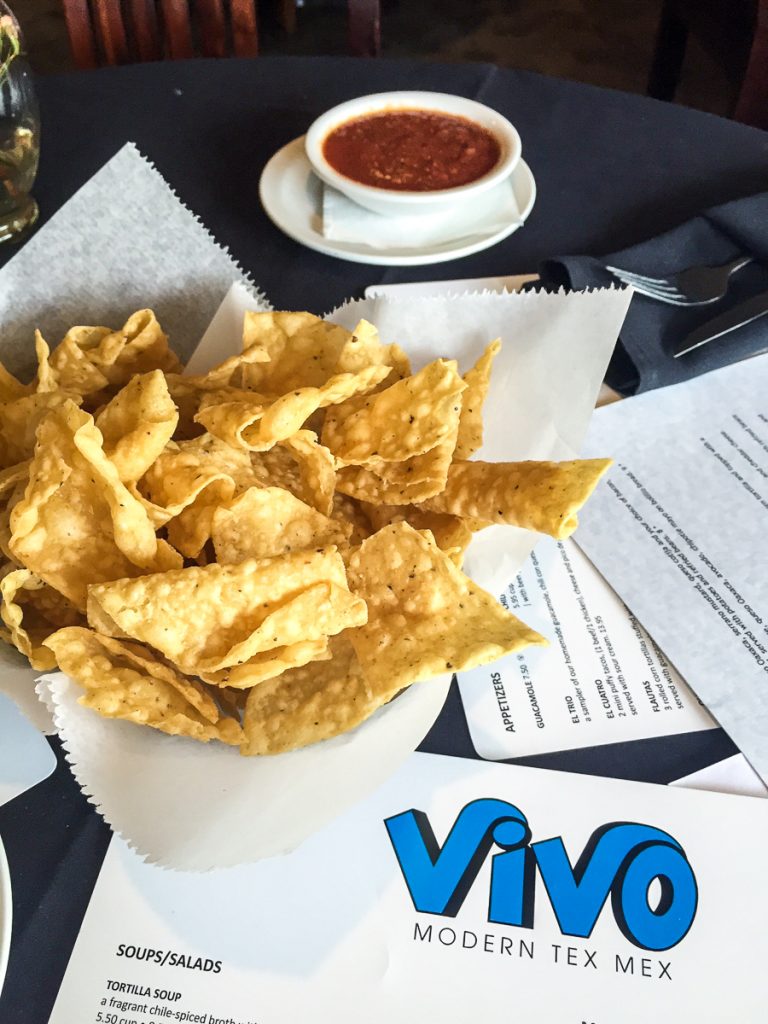 We each ordered the puffy taco plate and David, Cadry, and I all ordered one Guacamole taco and one tofu taco. I was very impressed with the tofu in the tofu taco because usually non-vegan restaurants don’t really prepare their tofu with that much flavor. This tofu had a lot of flavor and great (non-mushy) texture. My favorite was the guacamole taco because I can never get enough guacamole. 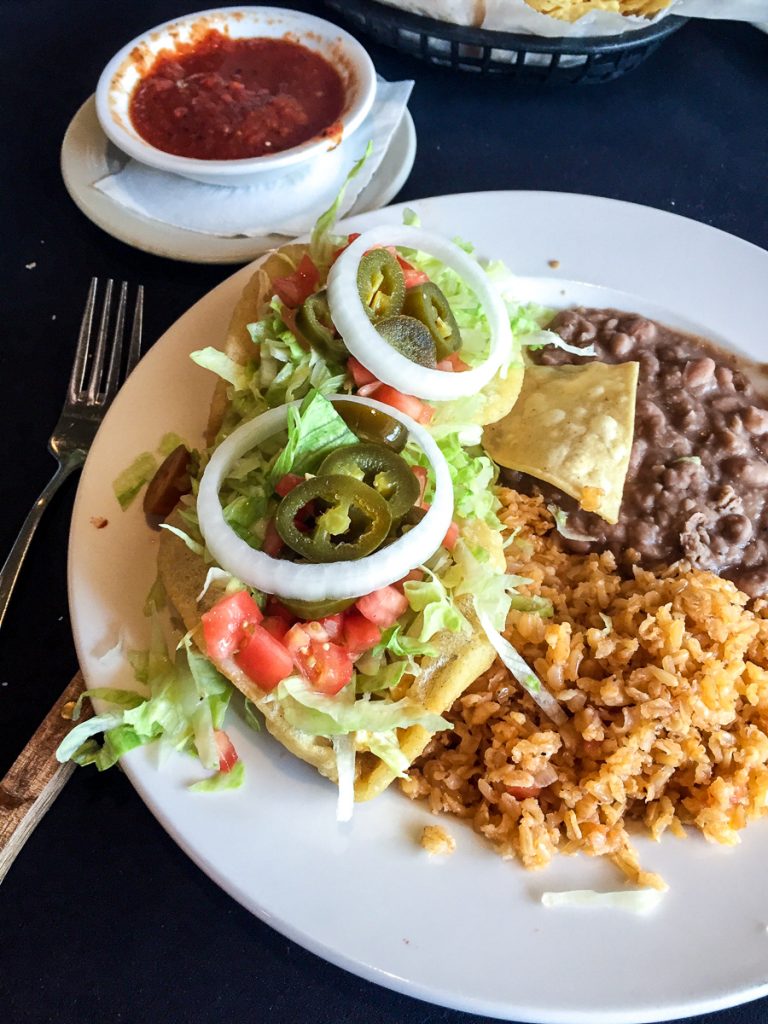 Chris ordered the bean tacos with cabbage, tomato, avocado, and onion (not pictured). He quite liked them. We both agreed that though the puffy tortillas were good and we enjoyed them, we didn’t like them any more than regular tacos.

After lunch, we had to bid our dear friends farewell. I just love this lady. 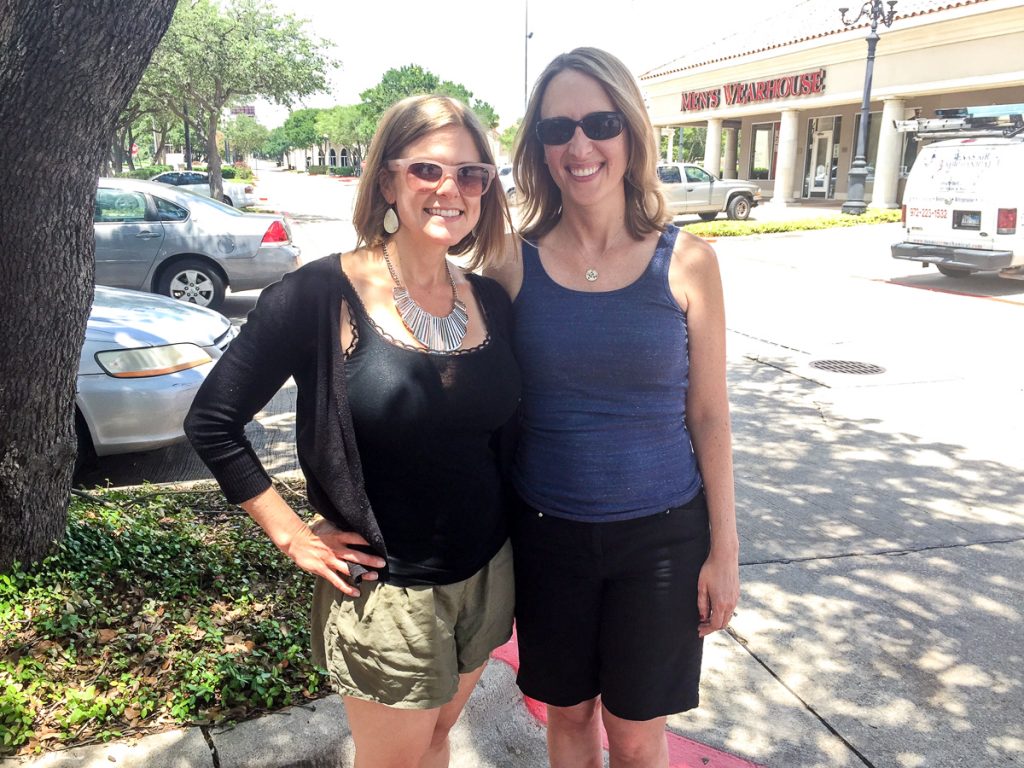 We were feeling like we needed to walk our puffy taco plates off so we headed over to South Congress Ave. We walked up and down the street, stopping into antique stores and book stores until we felt like we were going to pass out. We went back to our hotel and slept for the rest of the afternoon. Until it was time to go to Sweet Ritual (as I talked about above) for dinner. Yes, we had ice cream for dinner because we’re adults and we can.

The next morning, we got smoothies from Juiceland one more time and got on a plane back to LA. There were some other eateries I wish we’d had the time to try- BBQ Revolution, The Vegan Nom, as well as a few others. You guys should go and report back! Also, check out all the other vegan eateries I mentioned here and in Part 1. Let’s show ’em how easy/delicious/fun it is to be vegan in Austin!