This is Part 3 in our series on vegan travel in Barcelona. If your’e just tuning in, be sure to check out Part 1 & Part 2 first!

On our last day in Barcelona, after our daily breakfast at Gopal, we decided to spend the first half of the day wandering around the El Born neighborhood and the Gothic Quarter, soaking up as much of this area of town as we could. 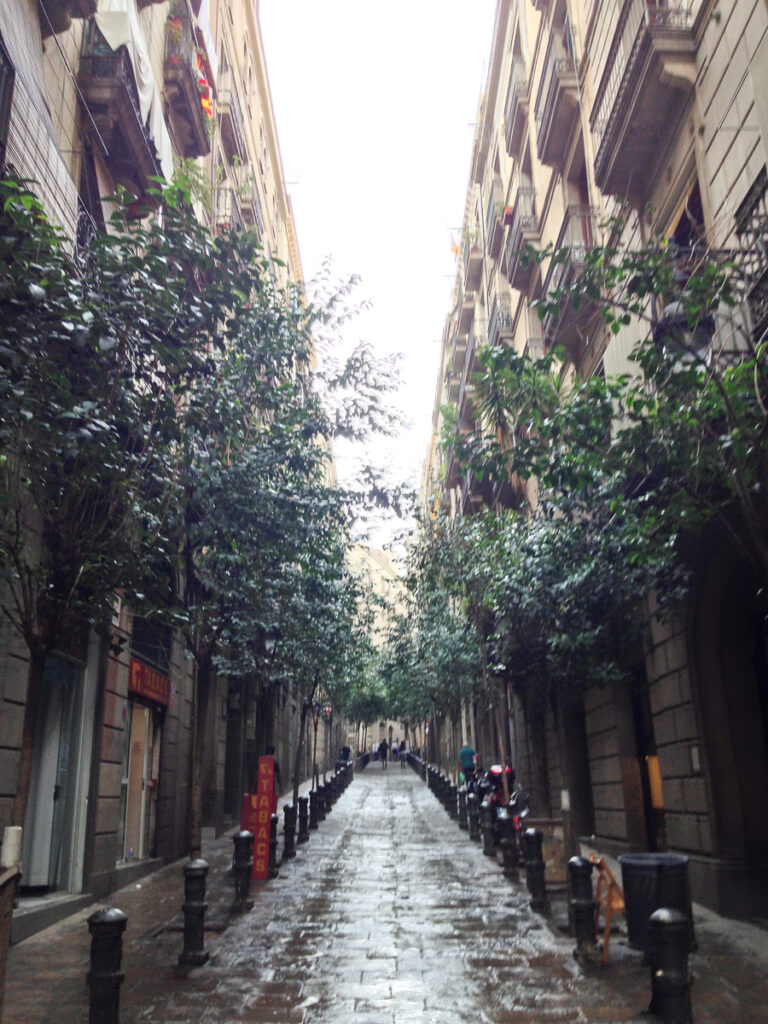 While wandering around, we came across this beautiful old bakery. One of the things I love most in life is peeking around old European bakeries, checking out the architecture and looking at how nicely their goods are displayed. I headed in as soon as I saw it, not expecting to find anything vegan but just to marvel in its beauty. Chris followed me in. 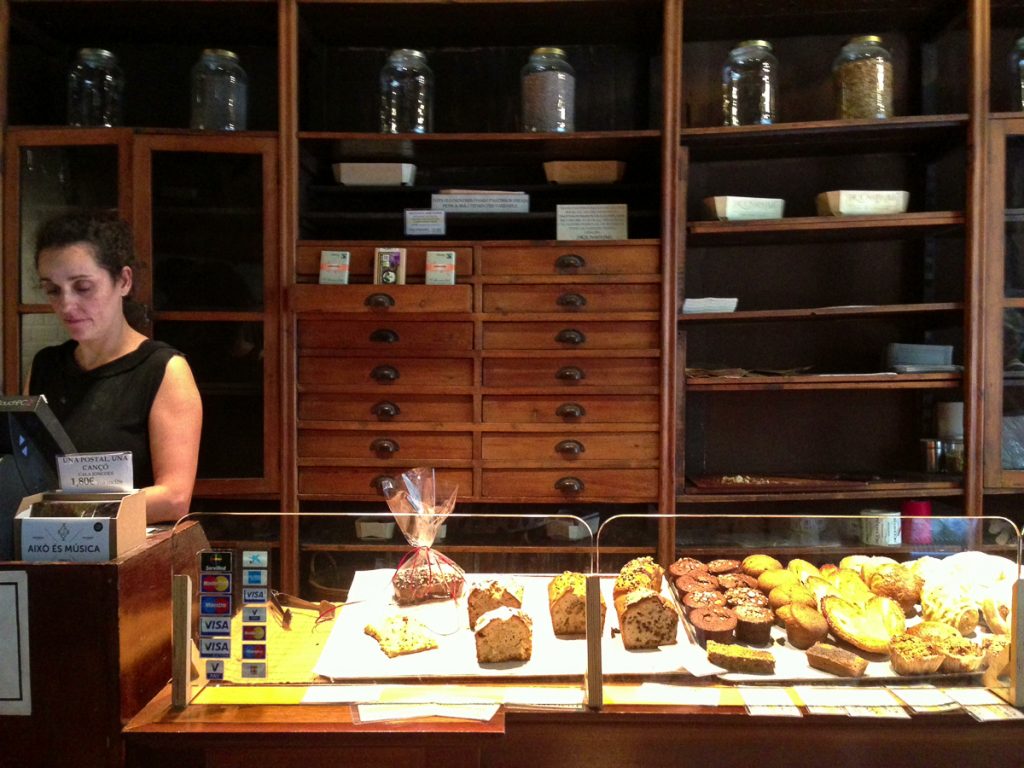 Imagine my surprise when across several of the items’ description tags, the word “VEGA” was stamped in red ink. The ingredients were clearly listed and sure enough, they were vegan. I was thrilled! 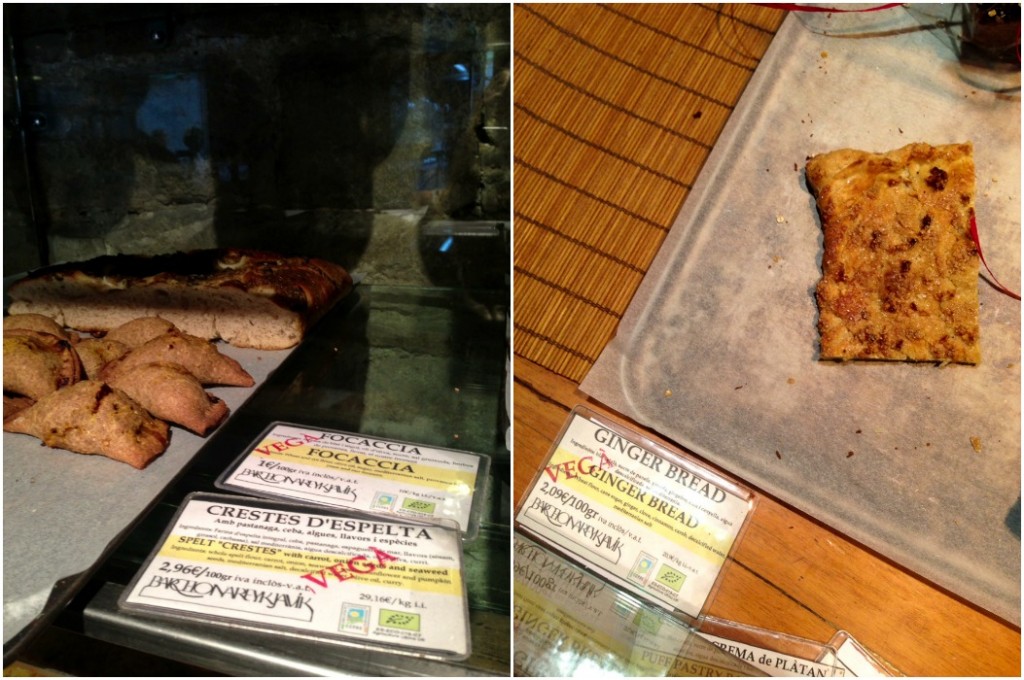 As I’ve mentioned before, if you stumble across a bakery in another country offering vegan items, it is criminal not to partake so of course we picked out a nice square of focaccia to share. We pulled it out as soon as we got back on the street and munched on it as we walked. It was fantastic. I wish we’d discovered this place sooner because I know I would’ve loved to have tried some other vegan baked goods! 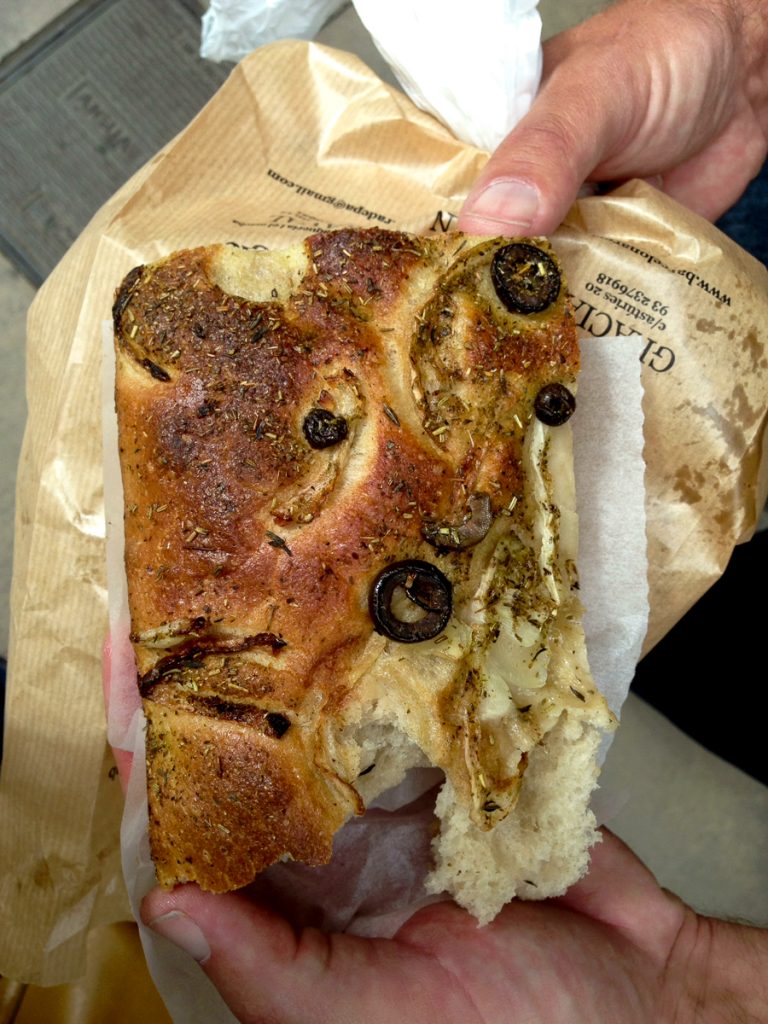 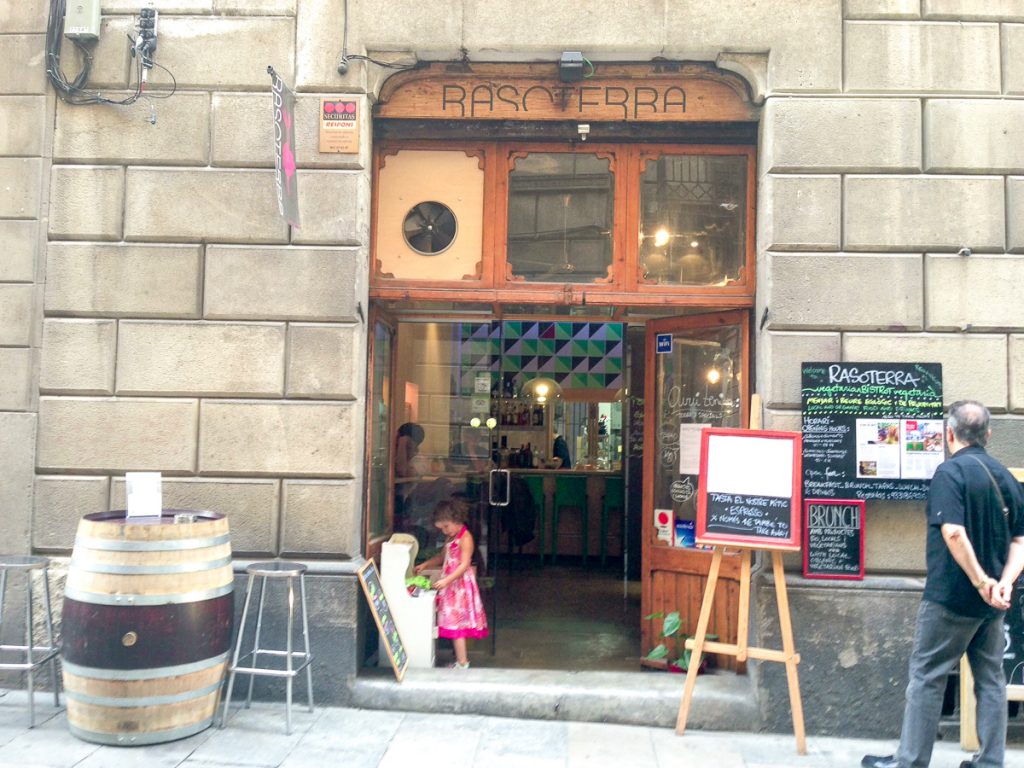 Rasoterra was on my list of places to try while in Barcleona. It is a vegetarian restaurant with several vegan menu items (and several items with the option of being made vegan), all clearly marked. They had great reviews on Happy Cow so we decided to stop in for a couple tapas and a glass of wine before we continued about our day. 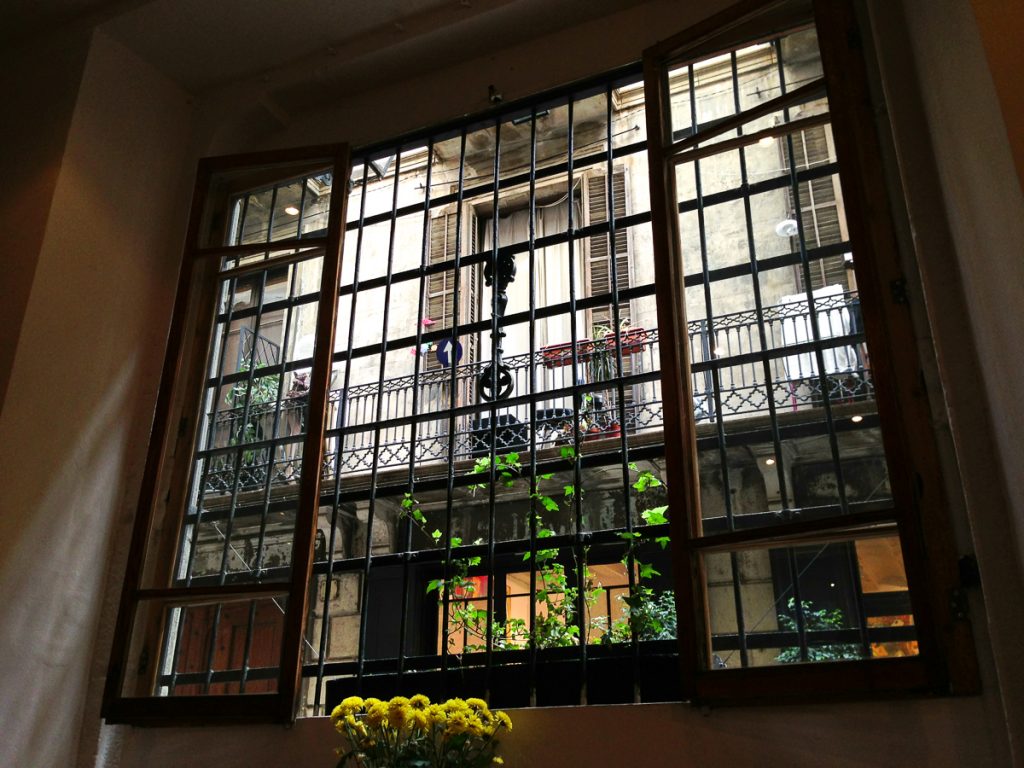 I immediately liked the contemporary yet casual decor and the relaxed vibe this place had. We were told we could have a seat anywhere we liked so we found a nice seat under the window. 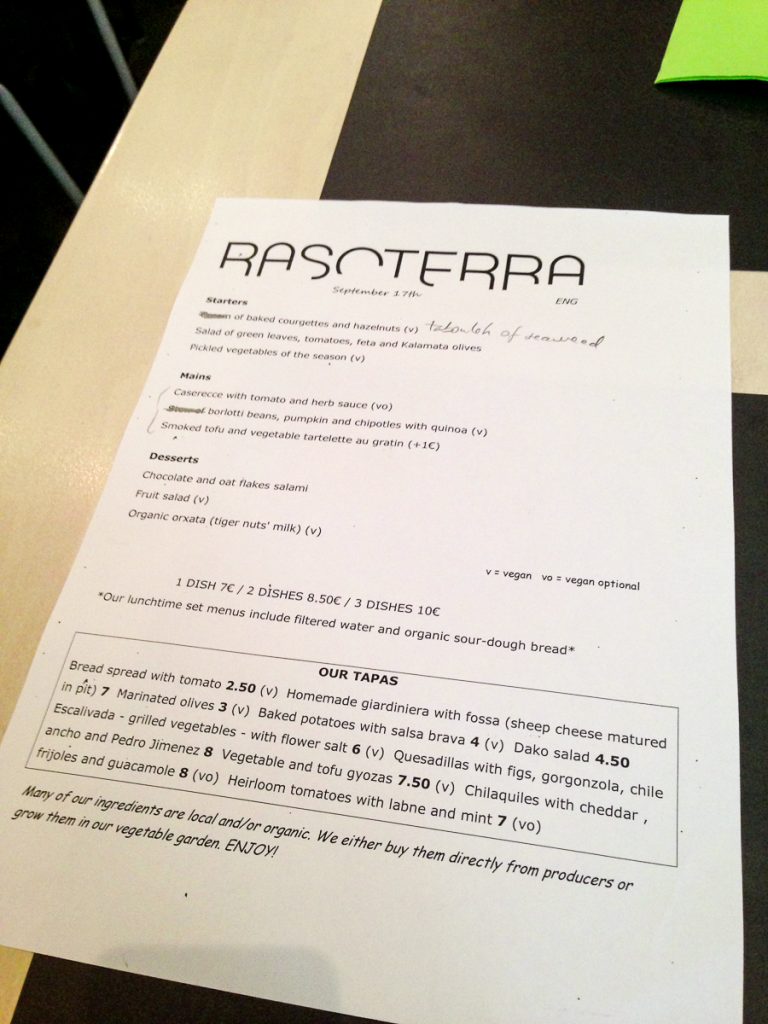 The server was very helpful and pointed out a few of her favorite vegan menu items and we chose two of them: the Vegetable and Tofu Gyozas and the Patatas Bravas (because apparently we can’t not have them when they’re on a menu). Both were really good and it was a very “chill” place to hang out before we got back on our feet. 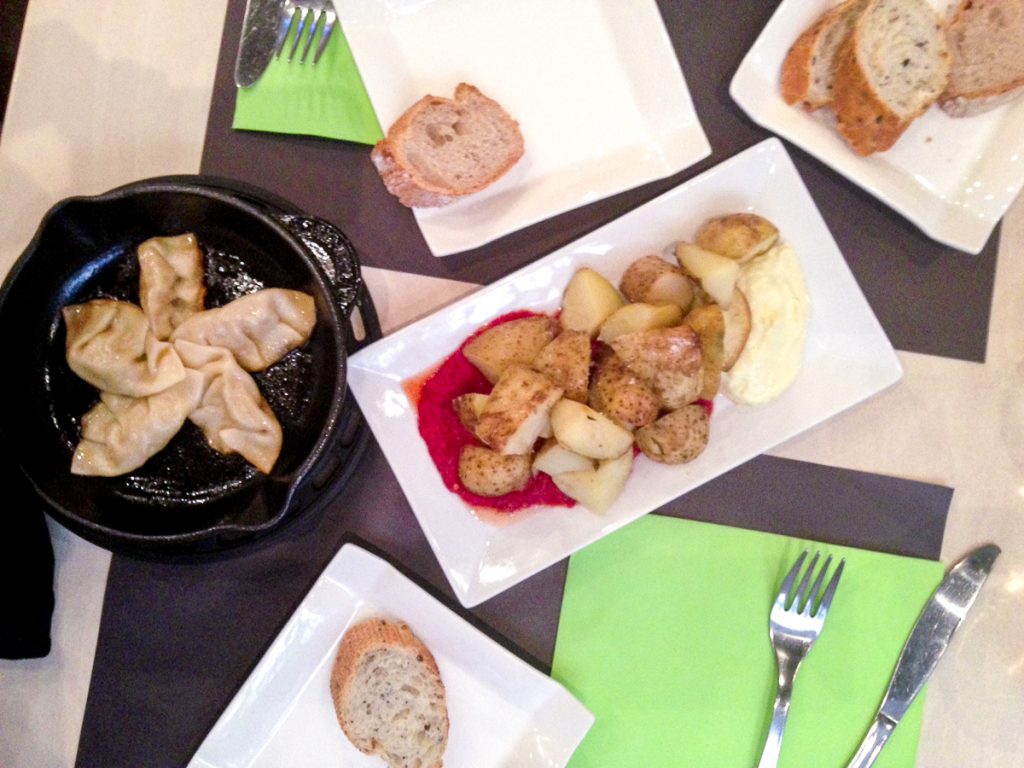 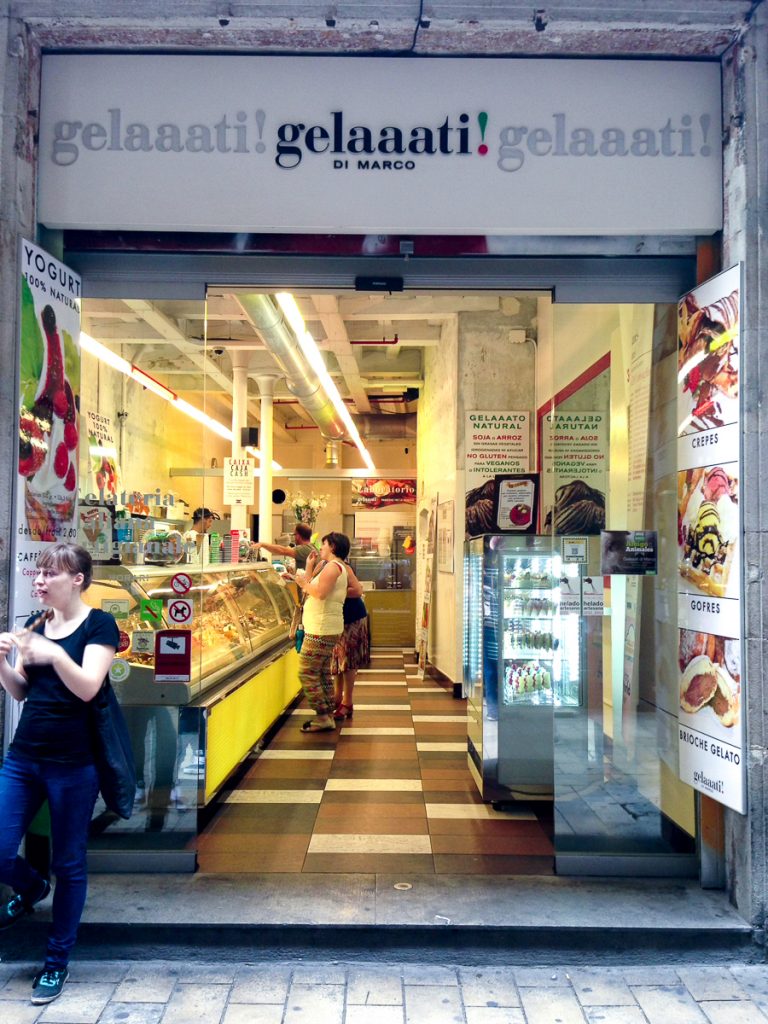 The day prior, we’d heard that there was a gelato shop that offered a few vegan flavors but we didn’t exactly plan on trying it because there is only so much food we can stuff into our bodies but when we came upon it on our walk to the metro station, it seemed like an omen that we should definitely try it. For the sake of Keepin’ It Kind and all of it’s wonderful readers dying to know how to get gelato while traveling as a vegan in Barcelona.

We were delighted to find that Gelaaati di Marco had 3 flavors of vegan gelato, all marked with what type of milk it was made with (rice or soy) as well as several flavors of vegan sorbets. 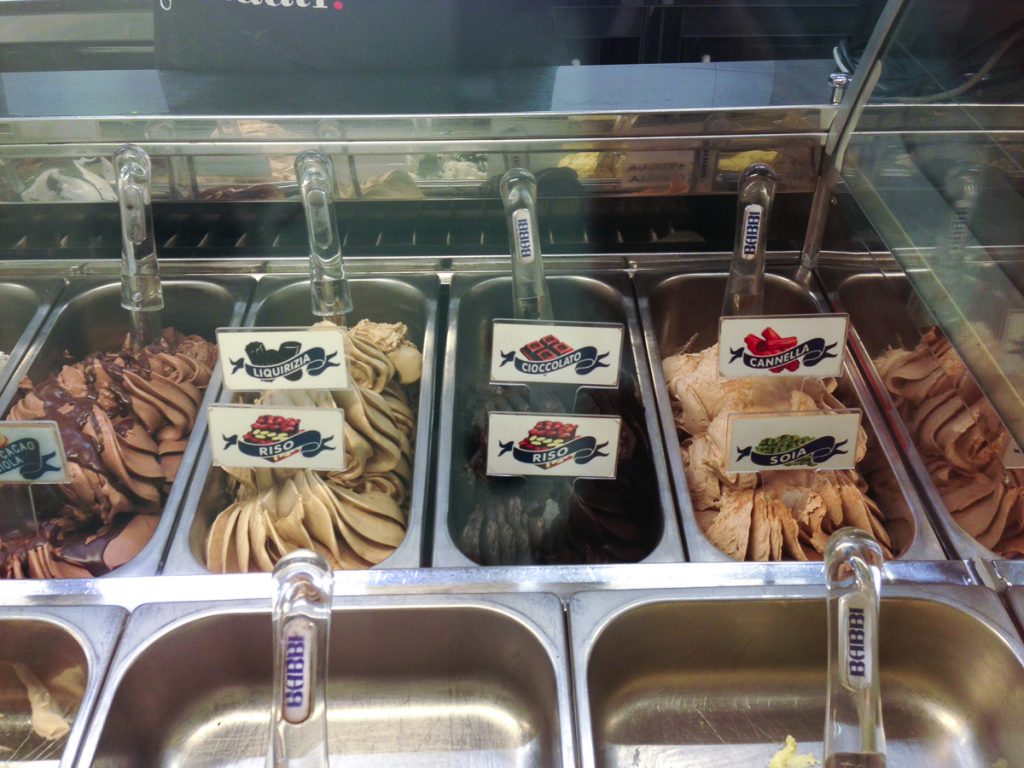 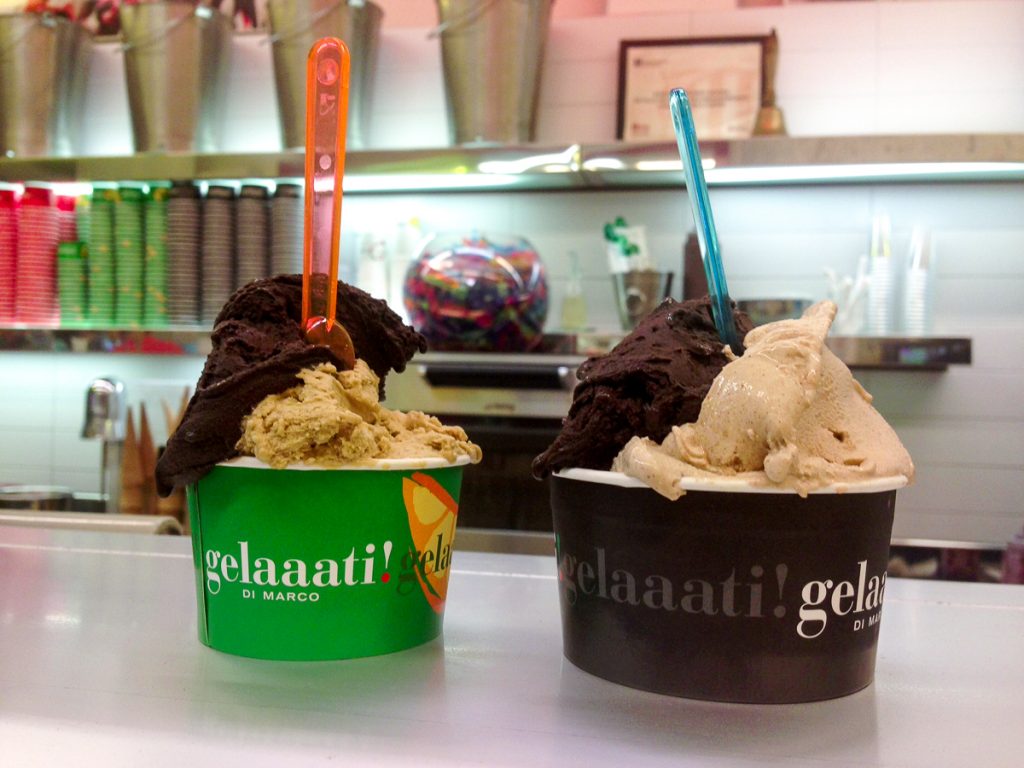 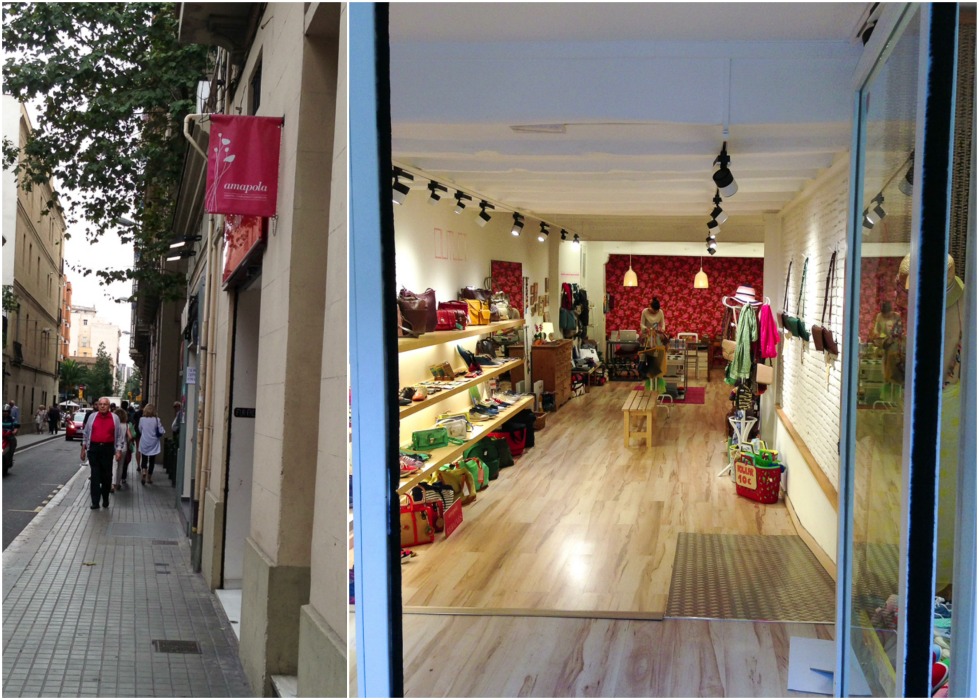 Before I tell you all about the incredible oasis that is Amapola, I should back up and fill you in on the story leading up to us going there. We’d heard about Amapola, a 100% vegan and earth-friendly shoe & purse boutique, the day before while at Veganoteca. Later, I told Chris that if we had time the next day, I’d really like to go there and check it out. He seemed the opposite of interested but didn’t dismiss it. The next day, when I brought it up again, he said “What are we going to do there? Just look at a bunch of shoes?” I told him I may want to get a Mat & Nat purse if they had any at a reasonable price and he begrudgingly agreed. 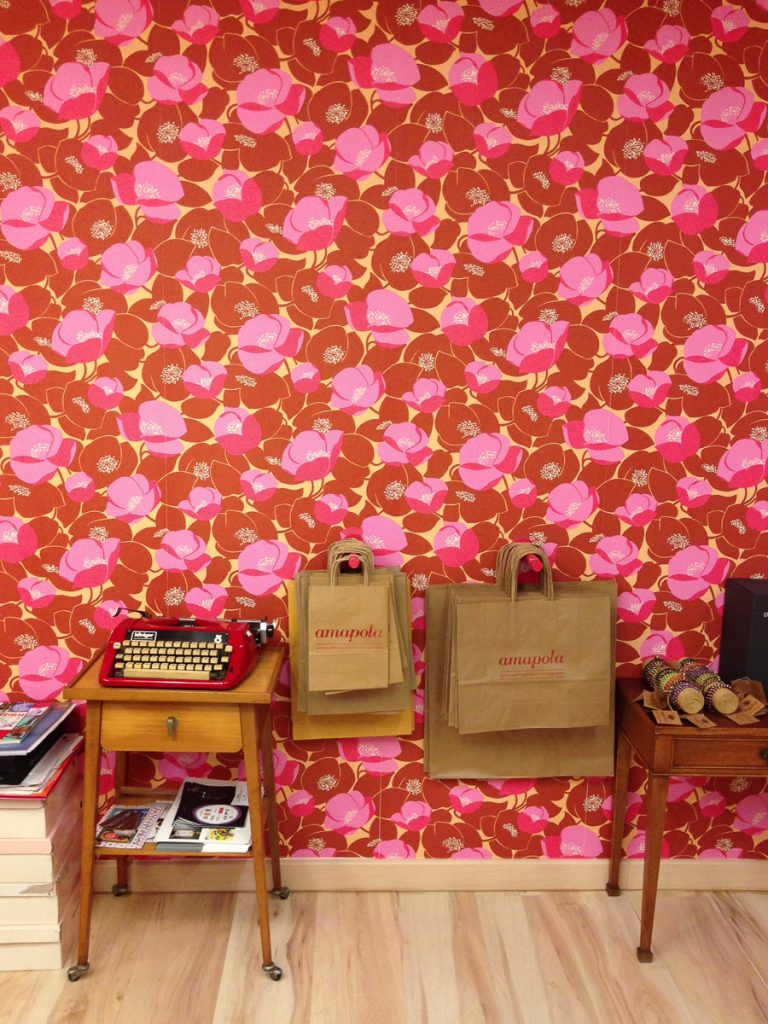 Fast forward to 10 minutes after we’d walked into the store. I had walked around and snapped some pictures while admiring the beautiful purses and accessories but hadn’t really settled on anything yet. Chris had picked out several pairs of shoes and asked me to help him narrow it down to 3 pairs (I forgot to mention that Chris is a little bit of a vegan shoe-fiend). 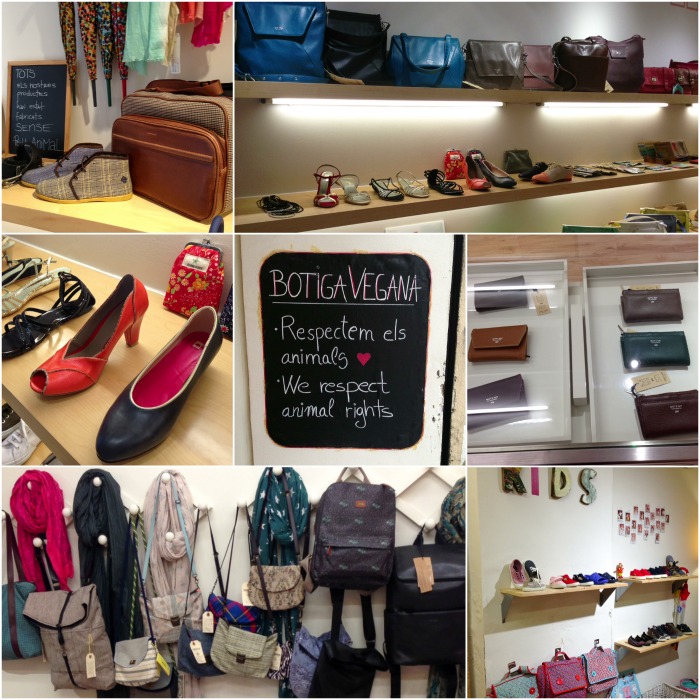 Amopala is a lovely shop with an incredible collection of vegan shoes for men, women, and children, a great variety of vegan purses, bags, and wallets, as well as a number of other accessories. If I didn’t already own so many dang scarves, I probably would’ve taken home two or three from here. Instead, I finally purchased my first vegan & earth-conscious (the inner lining is made from recycled plastic) Mat & Nat purse. Chris got three pairs of shoes that he had to later figure out how he was going to stuff into his suitcase. And that’s what we did at Amopala. 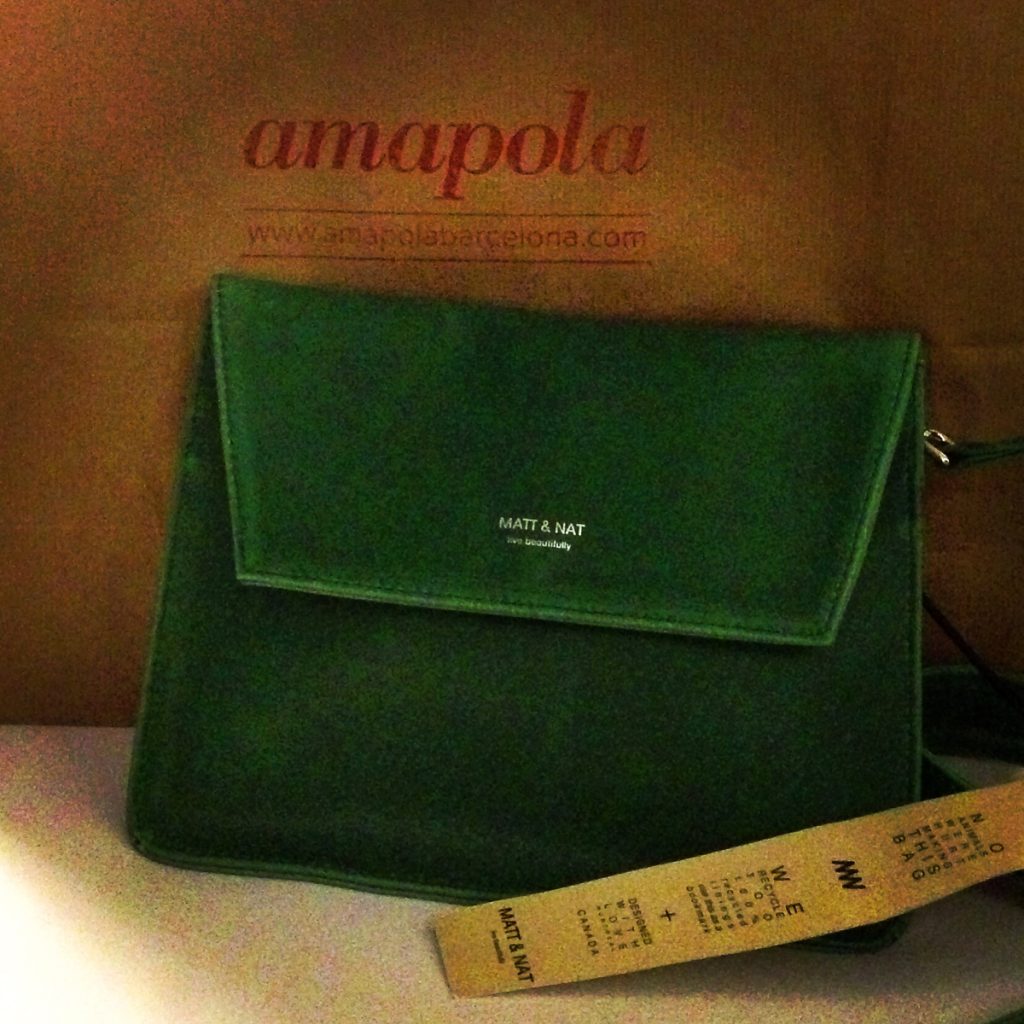 Amopala is located near another little vegan eatery that we wanted to check out (we wanted to get something to take on the plane with us the next day), Vegetart, but sadly, it was closed for construction that day only. After trying to check that out, we headed back to our hotel to get gussied up for dinner that night. 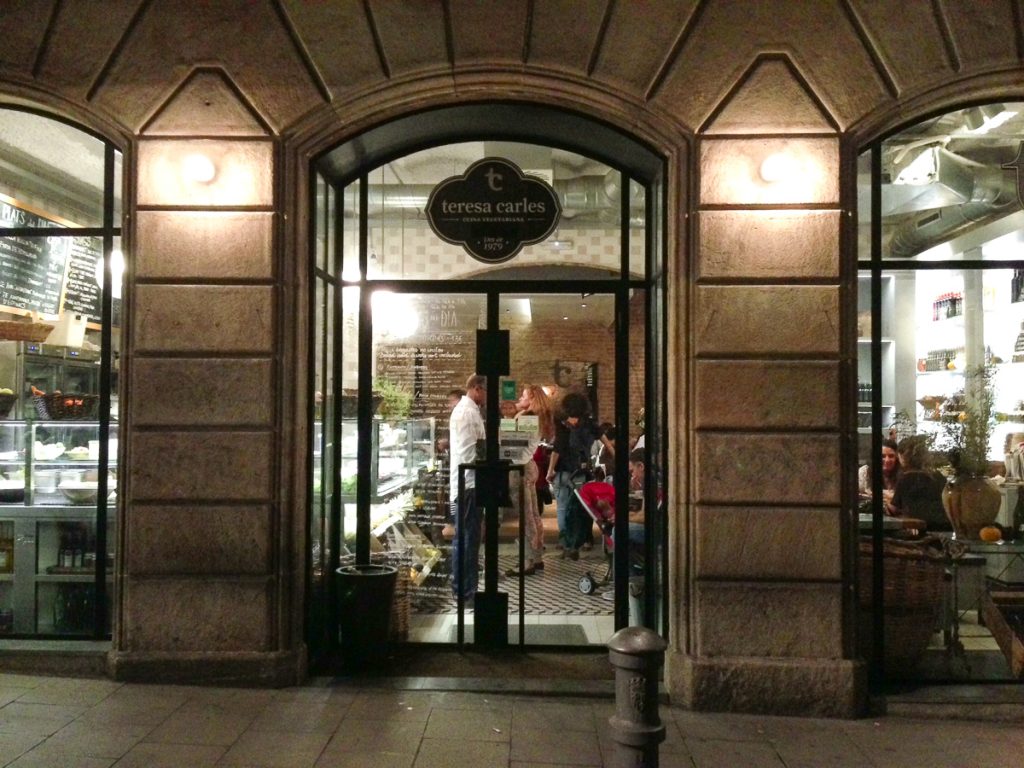 For the last night in Barcelona and the last night of our long trip, we wanted to have dinner somewhere special. After some Happy Cow research, we decided to try Teresa Carles, a vegetarian restaurant with many vegan options.

It was a pretty good sign that when we got there, the restaurant was packed! There was actually a wait which was something we hadn’t encountered in Barcelona. The restaurant itself is beautiful and even in the decor you can see that there is heavy emphasis is using fresh fruits and vegetables in their cooking. 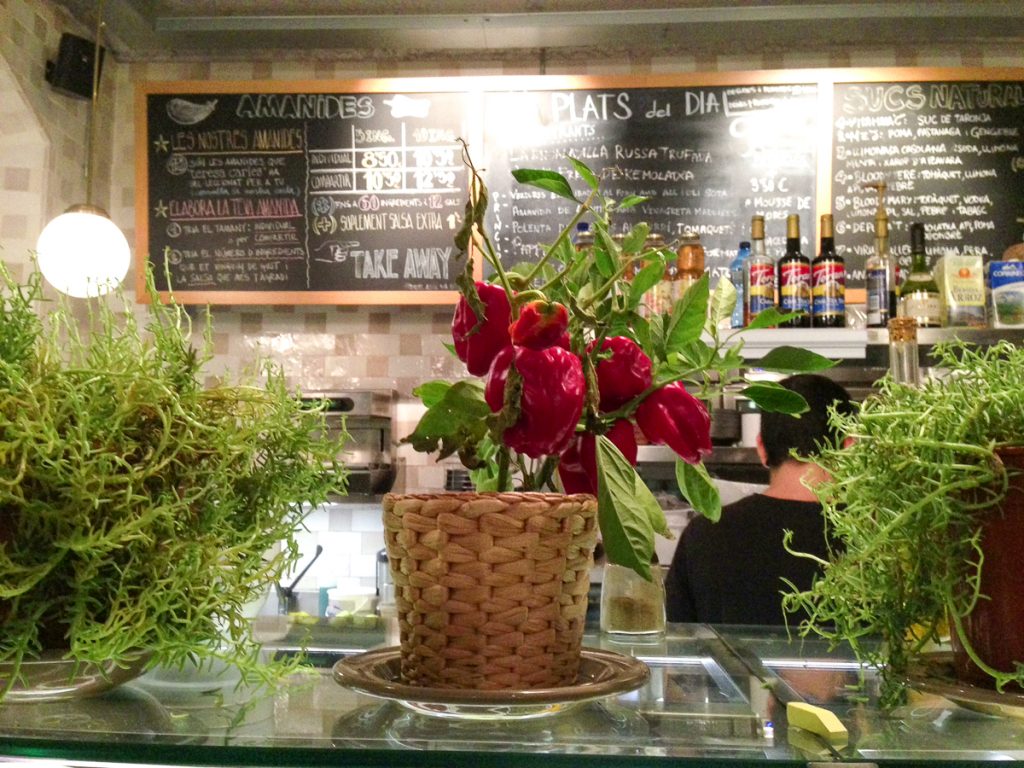 Once we were seated we poured over the menu and had a difficult time only picking a few things to try, but after several minutes we succeeded in narrowing it down to four dishes.

The first item was the Tofu & Avocado Tartare. We ordered it because it was something we’d never heard of before and it definitely exceeded our expectations. A slightly tart layer of marinated tofu sits atop a layer of chopped avocado and the is served along side a zesty little salad. We were quite pleased. 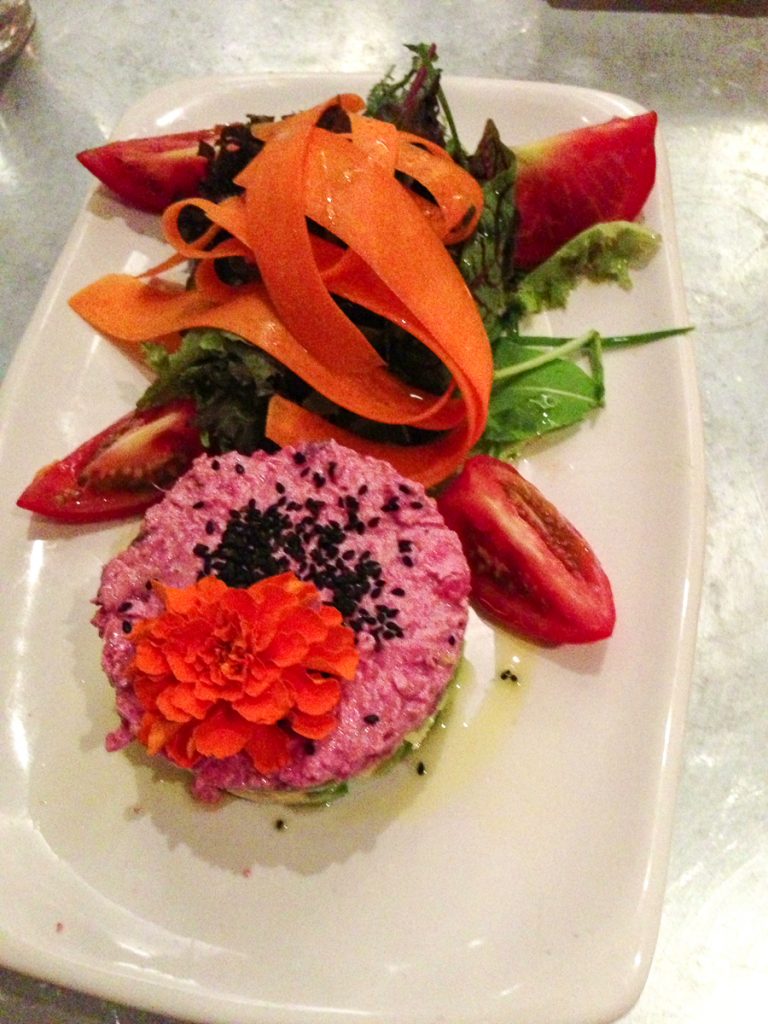 The second dish was a Pumpkin & Crispy Tempeh Salad. Again, we weren’t sure what to expect but we really enjoyed the slices of cooked pumpkin mixed with the strips of smoky, crisp tempeh and the creamy soy yogurt dressing. 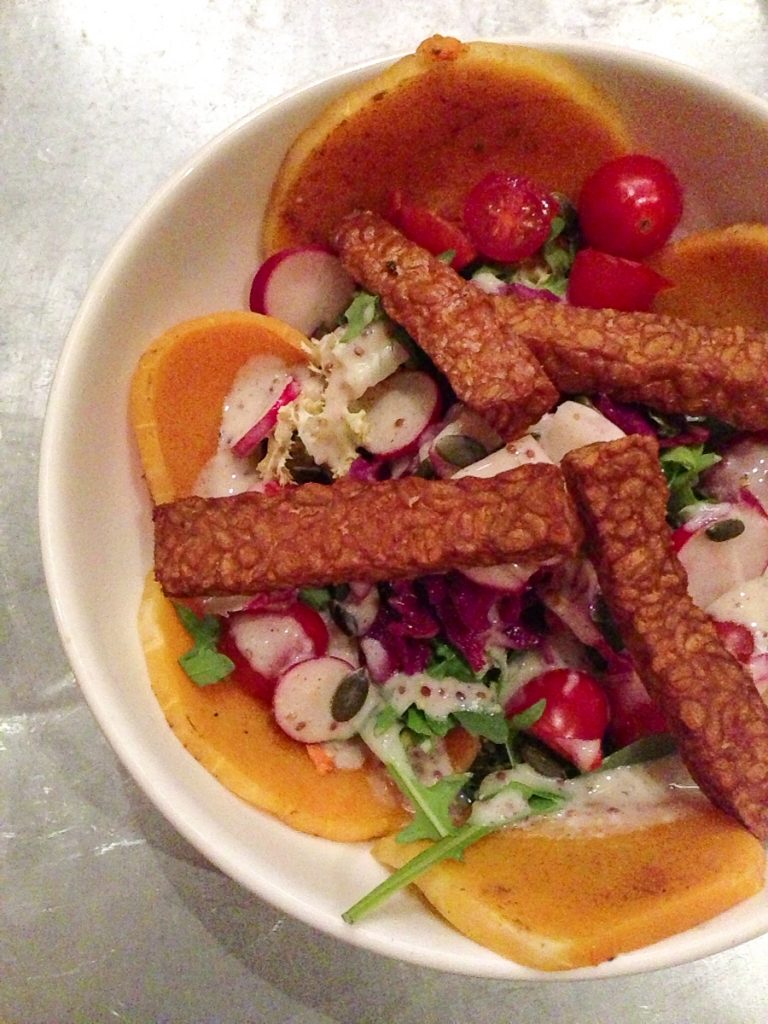 Our third dish was the Croquette Sampler platter. It normally comes with a cheese croquet but to make it vegan, they replace the cheese with another croquette of your choice. We had mushroom, artichoke, pumpkin, and vegan spinach. And they were all wonderful. 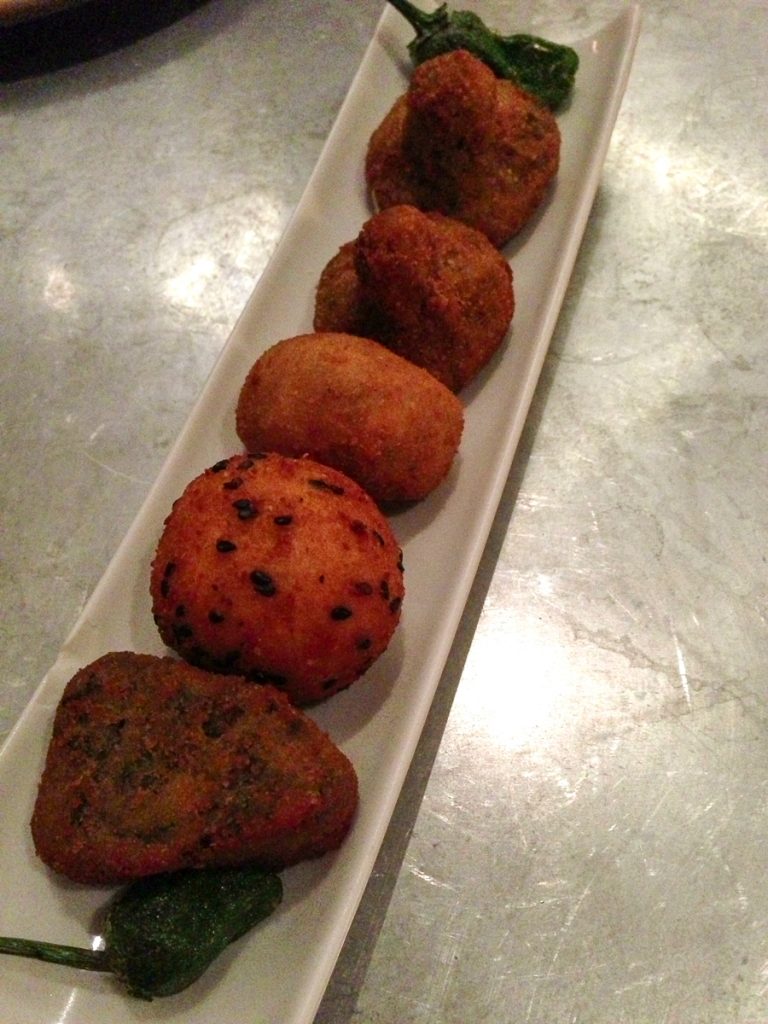 Our last dish was a raw cucumber roll stuffed with raw macadamia and cashew cheeses. It was good, but it seemed overpriced for what it was and I felt like I could’ve easily made something similar at home. 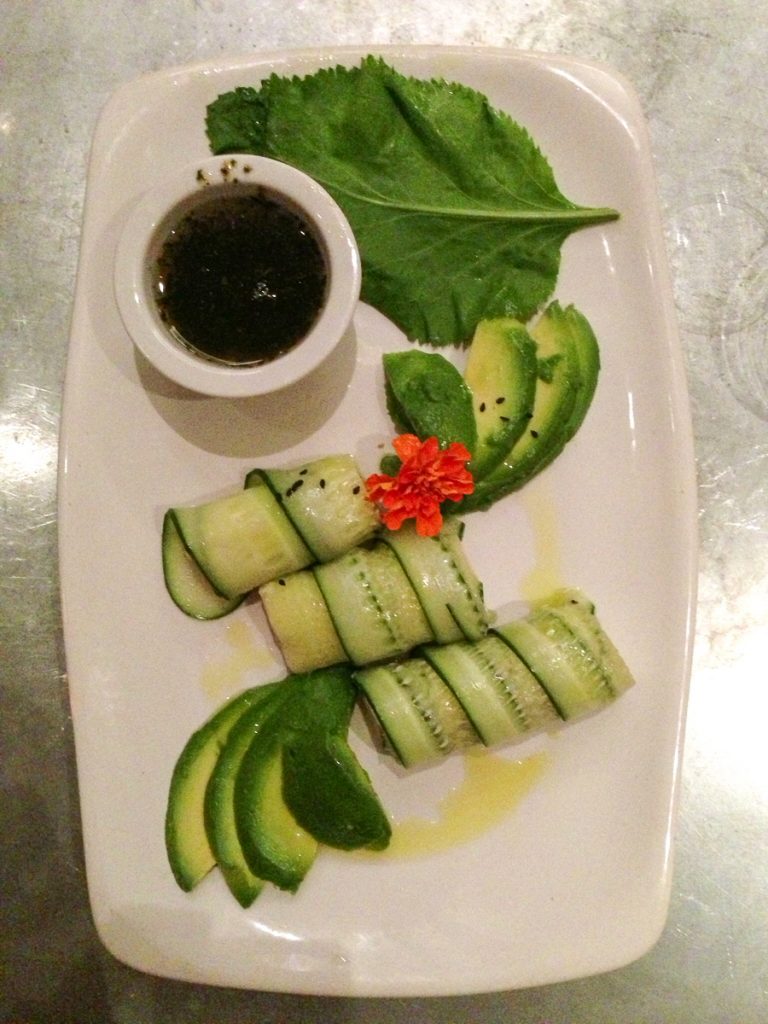 All in all, this was one of the best meals we had while in Barcelona. the tartare and the croquettes especially blew me away.

After dinner, we spent the rest of the evening walking around town. We walked everywhere, reminiscing over everything we’d seen in the last two and a half weeks and counting our lucky stars that we were able to pull of such an incredible trip. We walked for hours until our common sense set in and we decided to get back to the hotel and get a bit of sleep before we had to catch our flight in the morning. 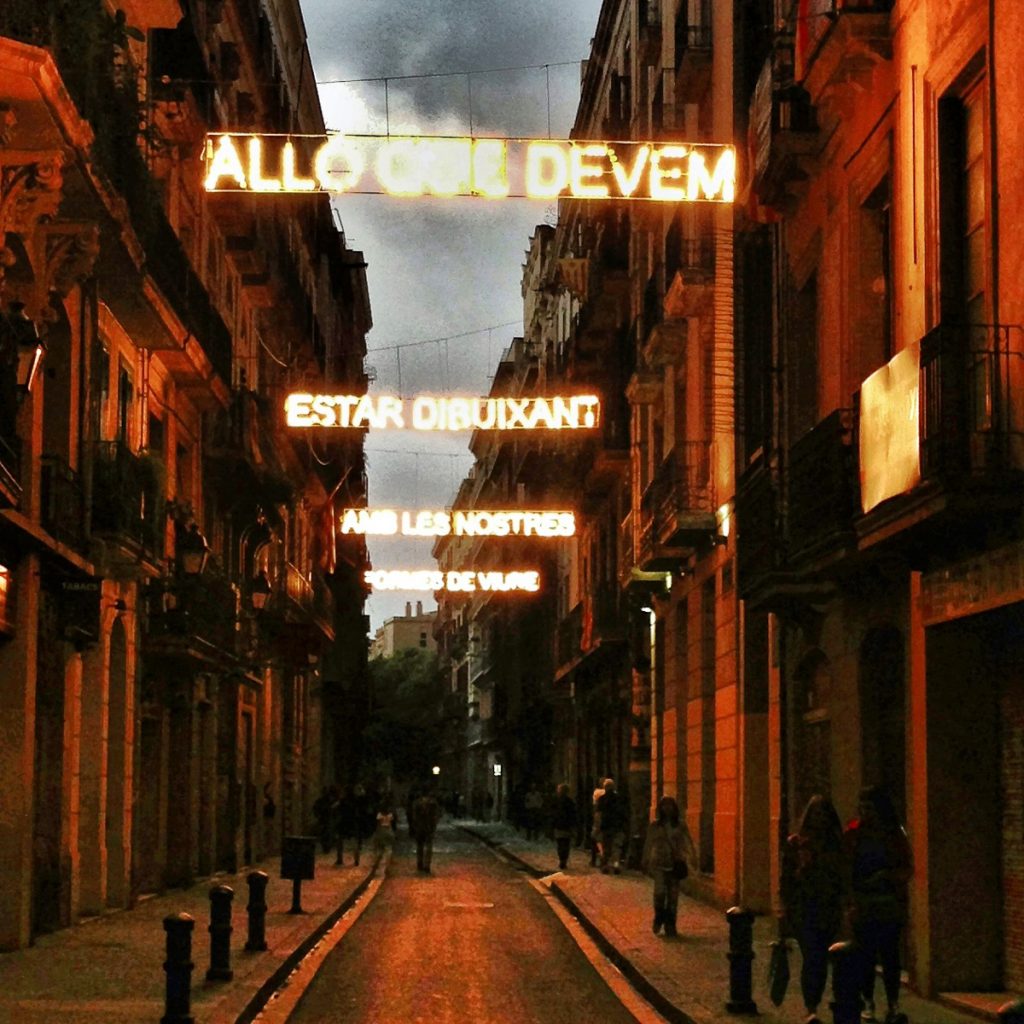 Being vegan in Barcelona is like being a kid in a candy store. We truly felt like we didn’t have enough time, or space in our stomachs, to try all of the food we wanted to. Unless you live there, I think it would be nearly impossible to try every single vegan dish in that city. The number of vegan and vegetarian restaurants in that city is astounding and if you are looking for a vegan paradise in Europe, Barcelona should be one of your top choices.

Want to check out more of our vegan travel in Barcelona series? Check out Part 1 and Part 2!