In the United States alone, over 58 billion animals are slaughtered for human consumption each year.  To put that into perspective, keep in mind the fact that there are just over 7 billion humans living on this planet right now.  Before these innocent animals are brutally murdered, they are mutilated, caged, drugged, mercilessly beaten, and deprived of proper nutrition, water, fresh air, and room to move.   Many of these animals won't survive long enough to be slaughtered or won't be considered "desirable" for consumption by humans.  Many animals die during the rough and stressful transport to the slaughterhouse, and almost 900 million animals who are too sick or weak or crippled from being malnourished and mistreaten, will either be slaughtered and sold to pet-food companies or tossed aside and left to die from exposure. 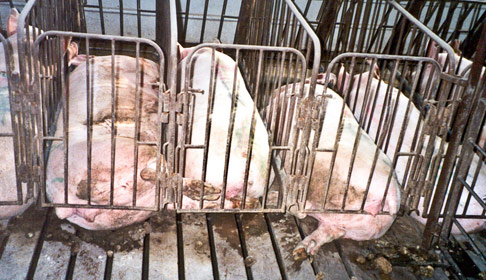 This is how a factory farm female pig will spend the 2.5 years of her life.
Photo Courtesy of Farm Sanctuary

In 1986, Gene Baur and his then wife, Lorri Houston, were investigating the Lancaster Stockyard and their practices, when they arrived at the "dead pile," a pile, as I mentioned earlier, of sick animals left to die from exposure.  Amongst the dead animals, Gene spotted a sheep who blinked her eyes.  Gene rescued her from the pile, put her in his Volkswagen van and took her to a veterinarian, fully expecting to have to put the sheep down.  Instead the sheep, later named Hilda, perked up a bit and Gene was able to nurse her back to health.  Hilda lived a healthy life for the next eleven years.  Hilda legitimized Gene's cause and inspired him to create Farm Sanctuary, an organization that not only rescues farm animals from terrible conditions in factory farms and cares for them in one of their 3 sanctuaries, but works to change the way society sees and treats farm animals, promoting a cruelty-free society. 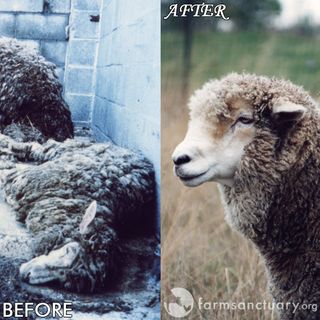 In the last 26 years, Farm Sanctuary has rescued thousands of animals, cared for them, and given them peaceful homes.  During this time they've also fought to change legislation regarding factory farming and helped businesses become more animal-friendly.  Every year, they organize a Walk For Farm Animals, taking place in several cities across the U.S., in order to increase awareness of factory farming, spread compassion, and raise funds to help them continue to rescue animals and fight to end factory-farming. 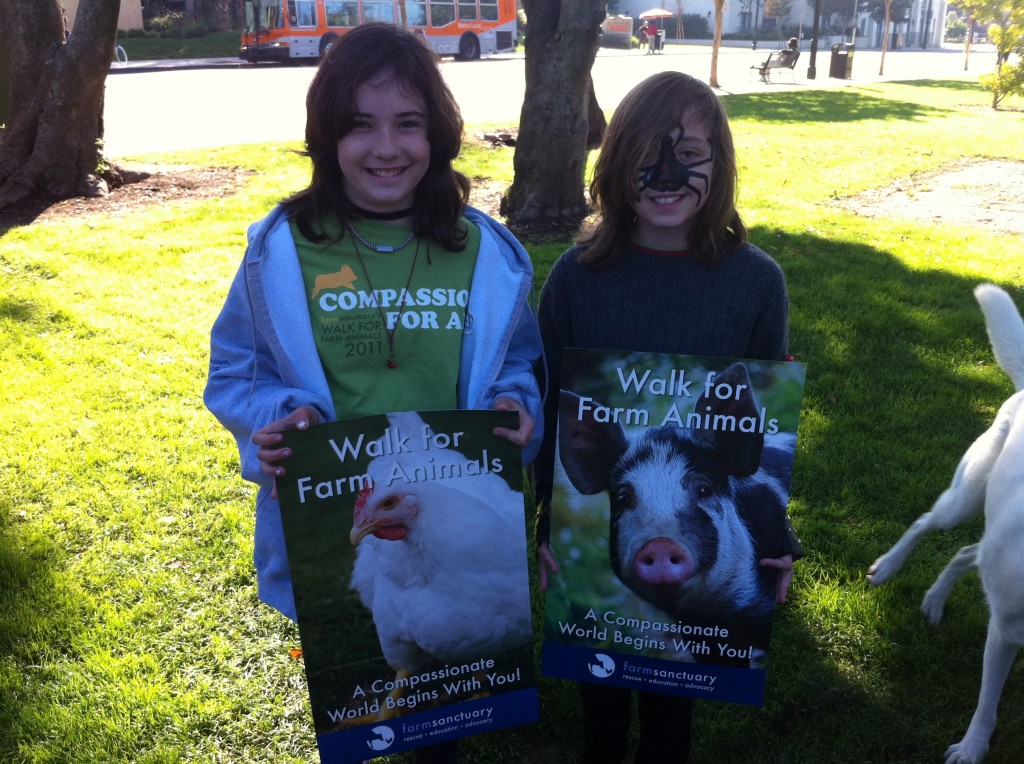 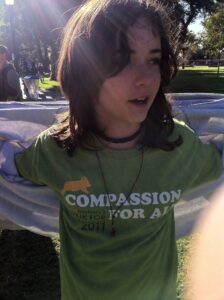 My family and I walked in last year's Walk For Farm Animals, and we are doing it again this year.  We believe that all living beings are equal and have an equal right to exist on this planet in peace.  Humans are the same as cows, pigs, chickens, turkeys, ducks, goats, sheep, and all other animals, the only difference being that humans have a voice.  We, along with Farm Sanctuary, are speaking for the animals because they cannot speak for themselves.  This is why my family and I are participating in Farm Sanctuary's Walk for Farm Animals.

Last year, we had so much fun enjoying music performances, a performance by a vegan comedienne, and free vegan food donated by local businesses.  There was an arts & crafts table and face painting for the kids, which the twins loved.  It was also very moving to see such a large number of people standing together to help save animals and the highlight of the day was a very inspirational speech from Gene Baur, himself.  This year's walk is going to be in Pasadena on October 27th, 2012.  If you are in the Los Angeles 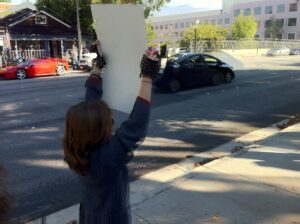 area, and want to use your voice to help farm animals, please join team "Keepin' It Kind."  To join our team, go here, and click on "Register Now."  You will have to choose your participant type and once you do, you will have to choose to enroll as an individual, join a team, or create your own team.  Click "Join a team," and pop-down menu will appear with the list of teams.  Choose "Keepin' It Kind."  We would love to meet you and have you on our team! 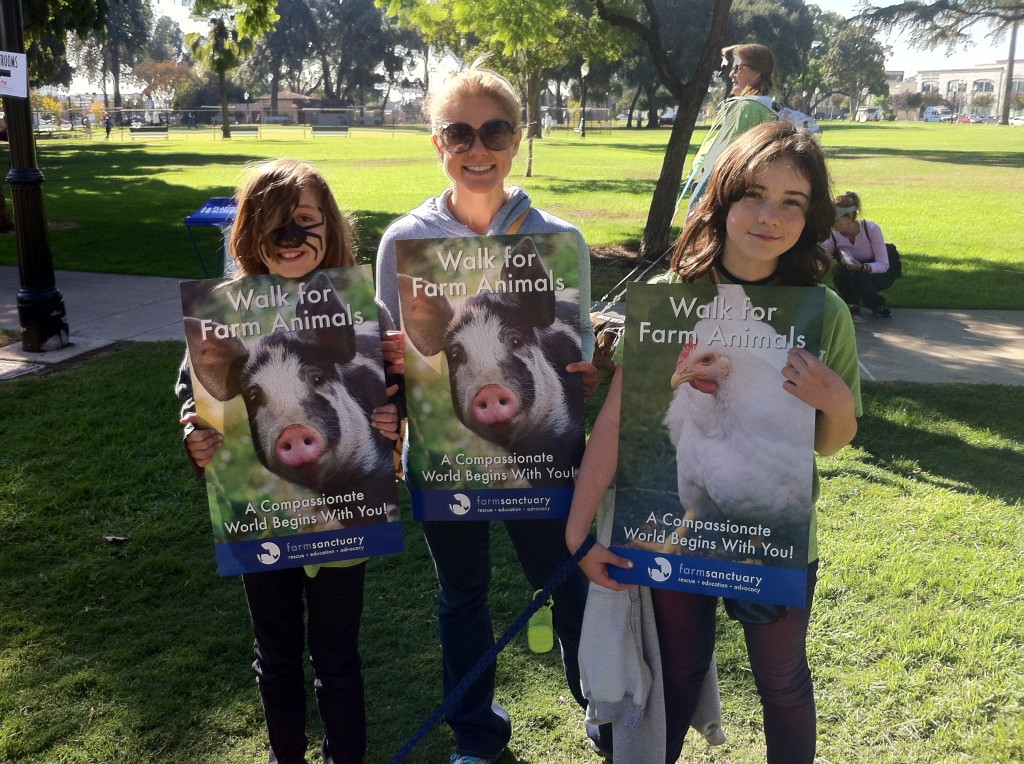 If you are unable to join us, we will miss you, but perhaps you would be kind enough to make a small donation to our team.  We have set a goal to raise $500 and we have a long ways to go!  We need your help!  If you love animals, support Farm Sanctuary, and/or really like Keepin' It Kind, please take the time to go here and make a donation.  Even a tiny bit helps.  Team Keepin' It Kind and farm animals everywhere will appreciate it.  Thank you so much for taking the time to read this and for any help you are able to provide. 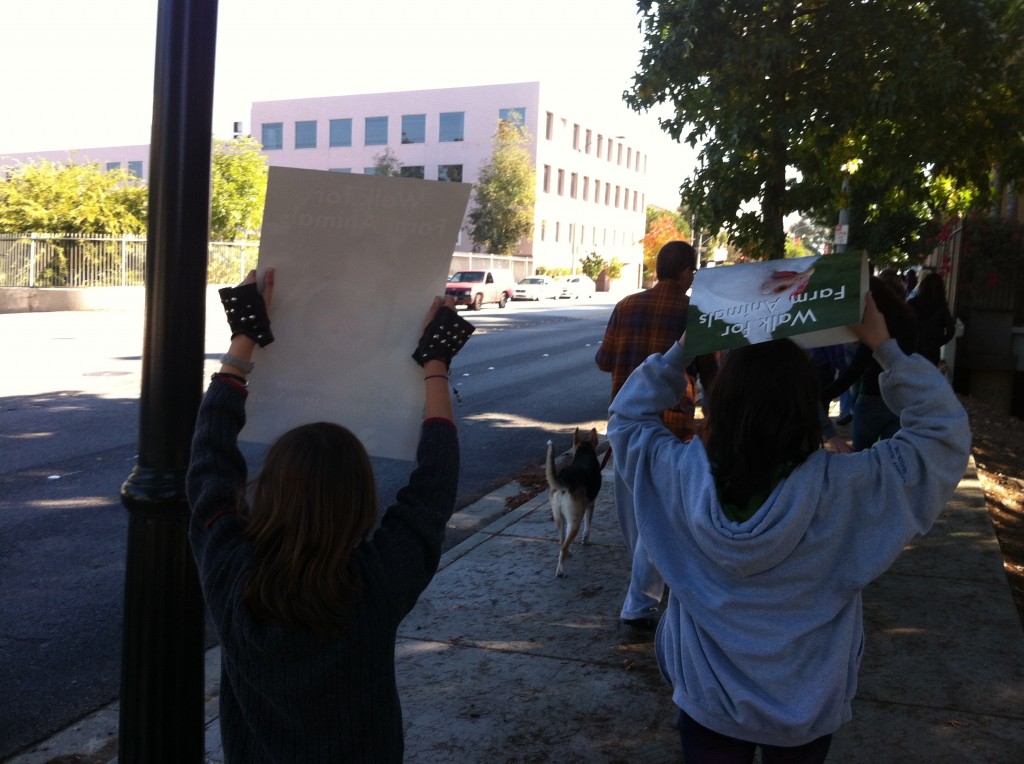 To read more about mine and Chris's path to veganism, please check out the new page we recently added, "Being Vegan."  There you will find more of what inspired us and a growing list of resources and articles to help and inspire other vegans or those just curious about veganism.

Unless otherwise stated, all photos taken by Chris Miller