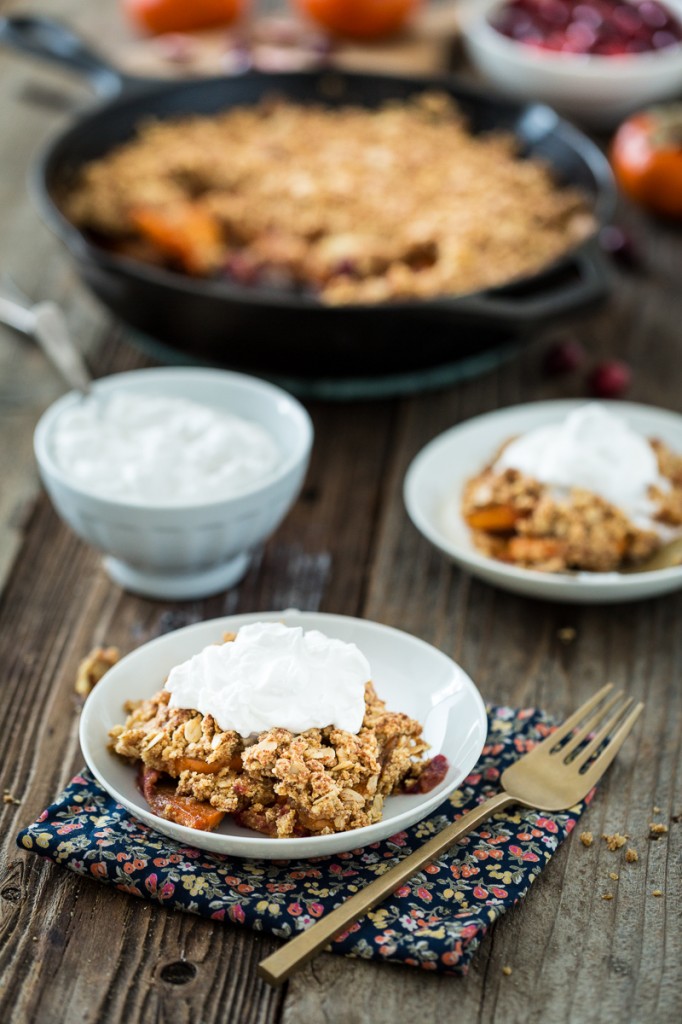 Before I tell you all bout this delicious beast of a dessert, I’ve got some good news. I have the first couple dates for my quasi-book tour! Eeek! I’m so excited to meet you guys! So here’s the deets for the 1st Event (and it’s an Event with a capital E!!!):

The next date will be at Book Soup in West Hollywood on January 11th at 3pm and I have a date set for San Francisco in February. More details on those to come. If you can make it to any of the events, I would be over-the-moon thrilled to meet you! And now for food talk. 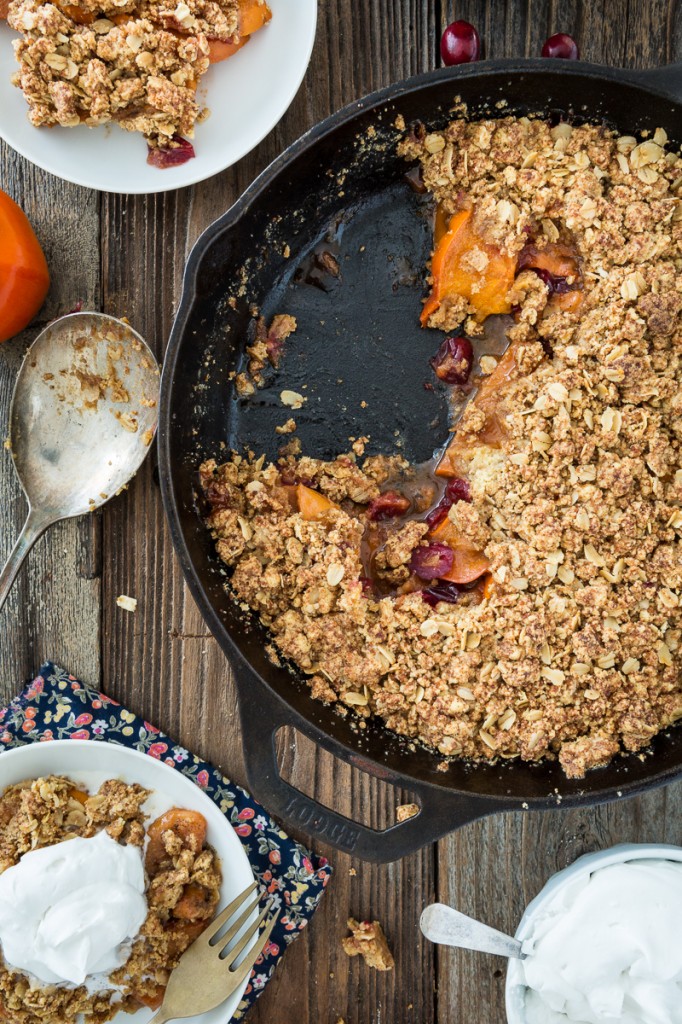 I know you can’t replace pumpkin pie on Thanksgiving so I’m not even suggesting that. Don’t worry- I’m not crazy. 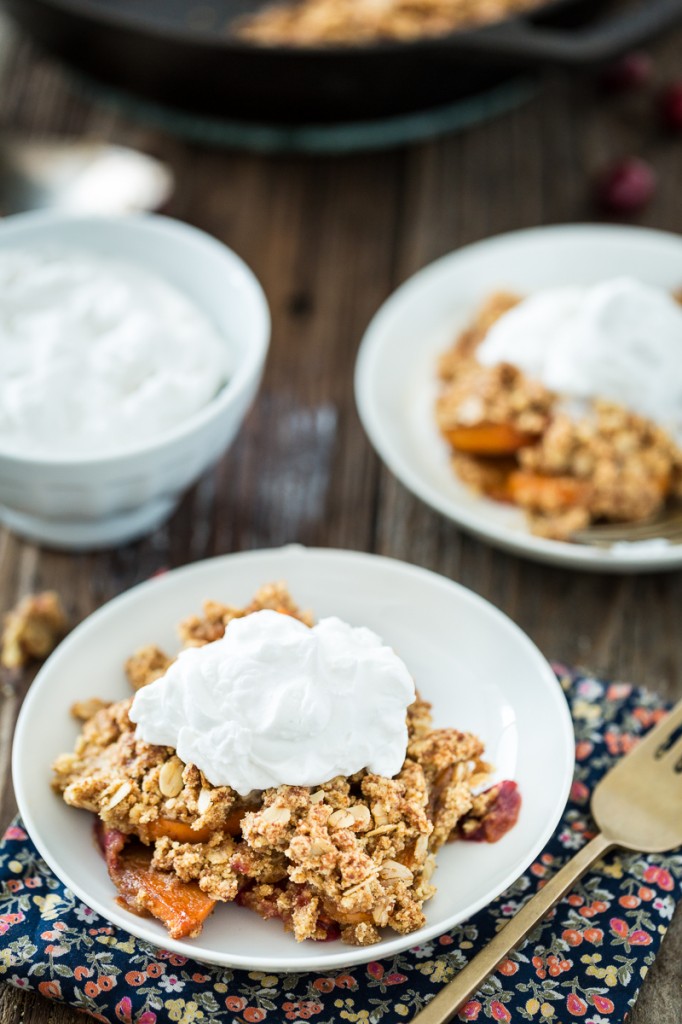 What I am suggesting is that you take advantage of all of the persimmons that have flooded farmer’s markets and CSA boxes everywhere, as well as the abundance of fresh cranberries this time of year, and make a dessert that really makes these fruits shine. Again- it doesn’t have to be on Thanksgiving but this could be a nice side dessert (Side dessert? Is that a thing?) or just make it today. I vote for making it today. 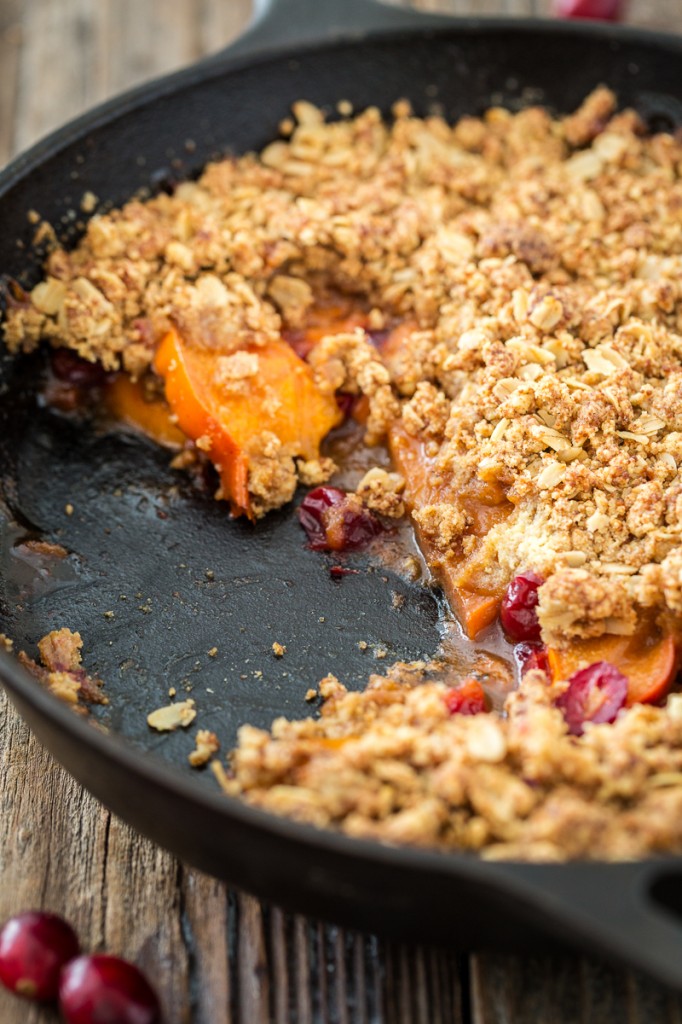 This persimmon crisp is remarkably simple. Slice up some persimmons and chop some cranberries in half. Toss them in some lemon juice, coconut sugar, fresh ginger, and a bit of arrowroot powder to thicken the sauce as it cooks. Easy peasy. 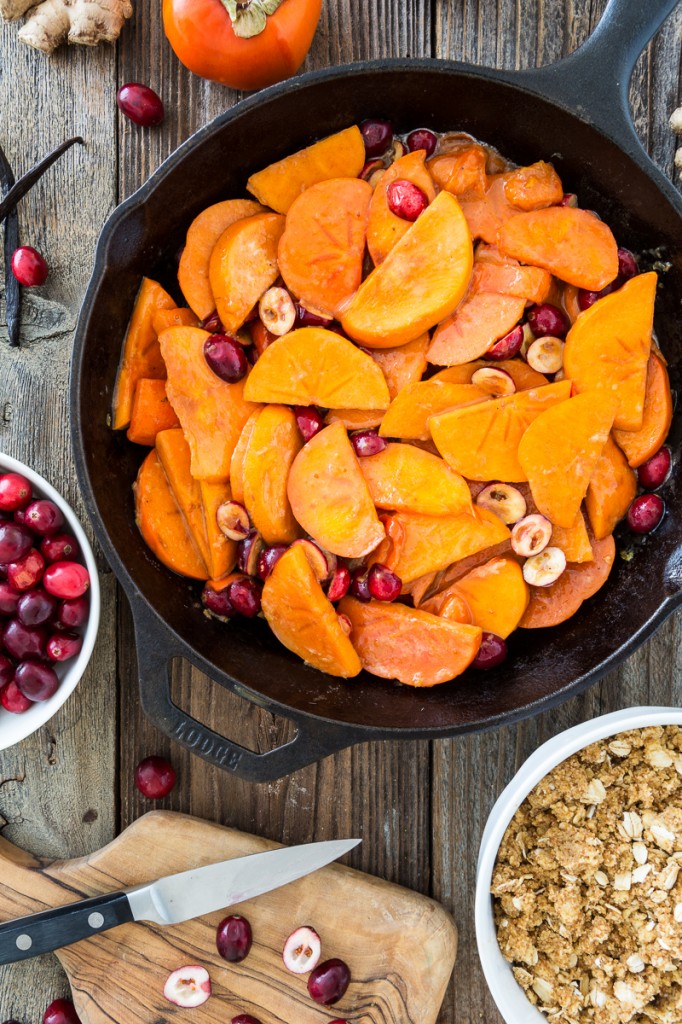 The crispy topping is where it gets really interesting. Vegan butter is cut into a gluten-free mixture of oat flour, brown rice flour, and corn flour (to give it a cornbread-reminiscent flavor) for the base. Then, oats, coconut sugar, cinnamon, and the inner scrapings of one vanilla beans are folded in to create the most aromatic, heavenly fruit crisp you’ve ever put in your oven. 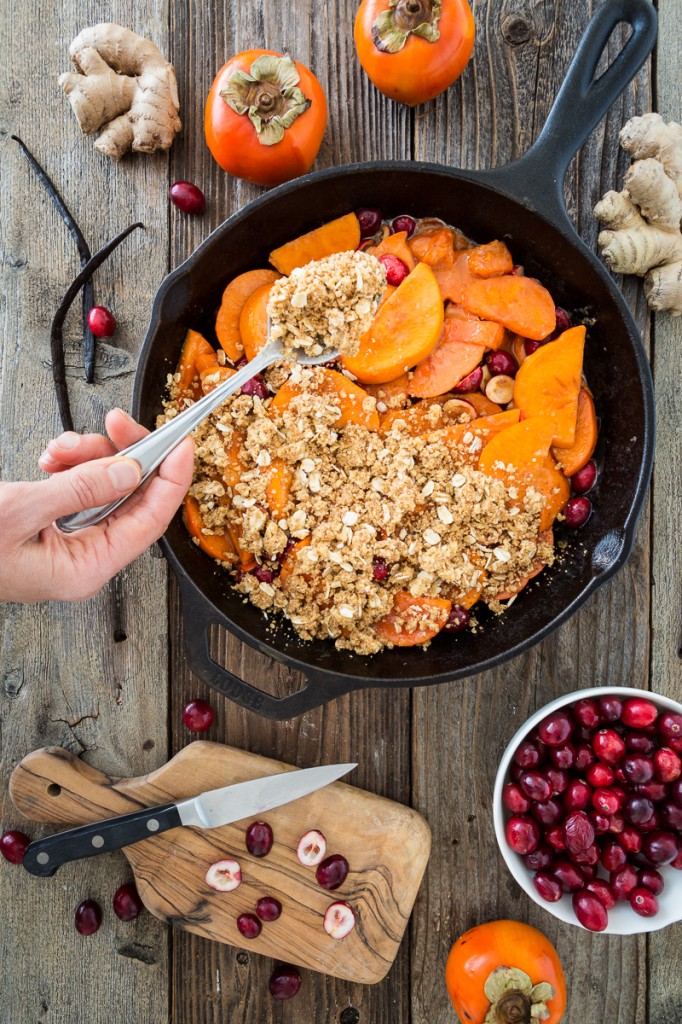 After it has baked and your house is smelling like some sort of holiday baking wonderland, you can serve yourself a hot, steamy serving fresh from the pan, with fruit juices running and those crisp, vanilla-scented crumbles perched atop the juicy persimmon and cranberries and top it with a dollop of freshly made coconut whipped cream. This is one of those times when it’s not too good to be true. It’s actually that good. 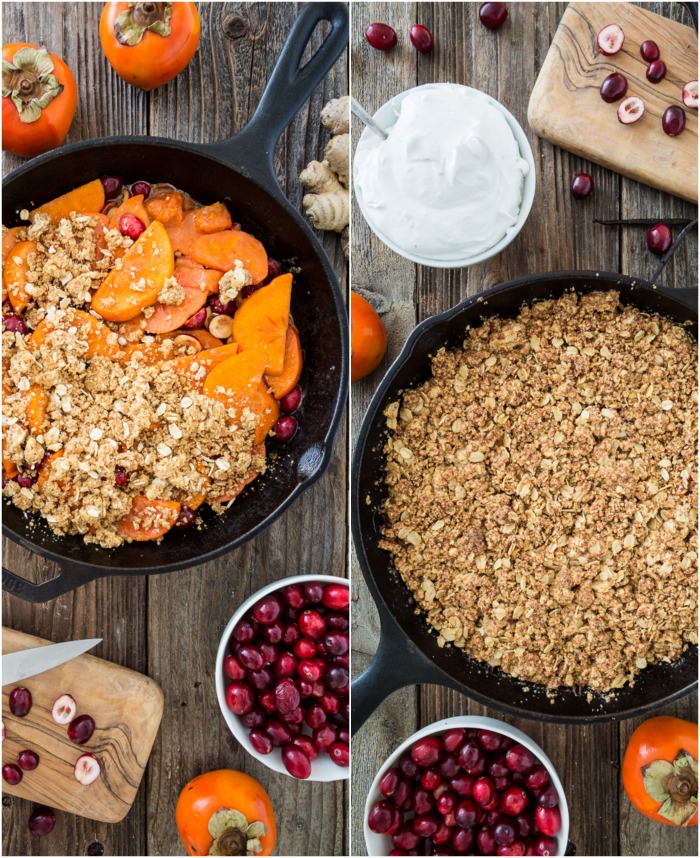 I have absolutely no self-control when it comes to this dish. One night, my eyes were bigger than my stomach and I fixed too large of a portion. Did being full stop me from finishing it? No. Did I go to bed with a tummy-ache, begging Chris to never let me eat that much again? Yes. True Story. 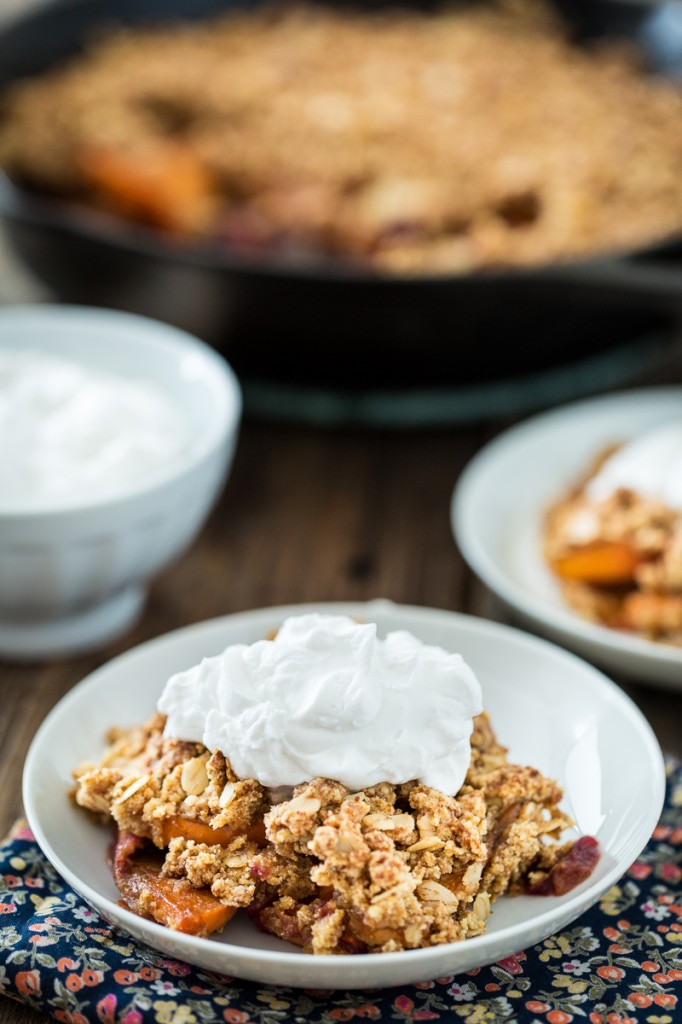 Let’s talk about the flavor combinations in this mouthwatering dish. Fuyu persimmons are simply sweet and have an almost creamy-flavor to them. They’re best when firm and crisp but definitely do not get them confused with Hachiya persimmons! Those are best when they are super soft and mushy. If you try to eat them before they’re super soft, your tongue will hate you for it. When the subtle flavor of the Fuyu persimmon is combined with the tangy trio of cranberries, lemon, and ginger, you get a mixture that is a perfect balance of both sweet and tart. Then pair THAT with the buttery, crumbly, cinnamon, vanilla crisp topping and you’ve got a dessert that you will need seconds of. 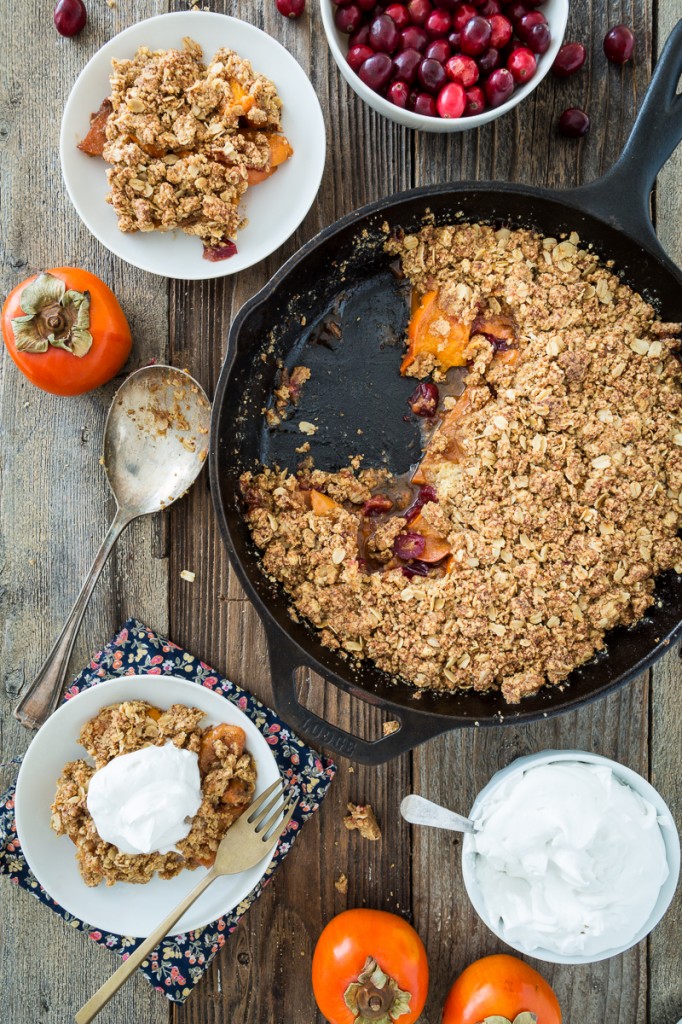 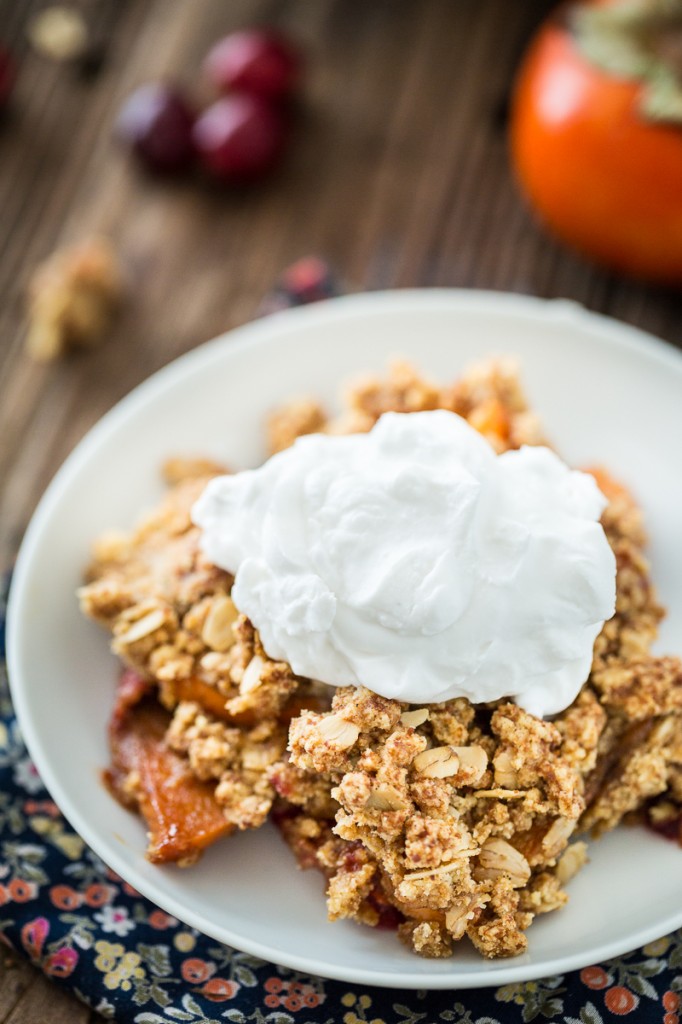 Congrats to Deanne O’Donnell, the winner of the Lily’s Dark Chocolate Giveaway! Thank you to everyone who entered!

Really though- Are “side desserts” a thing? Because they totally should be…