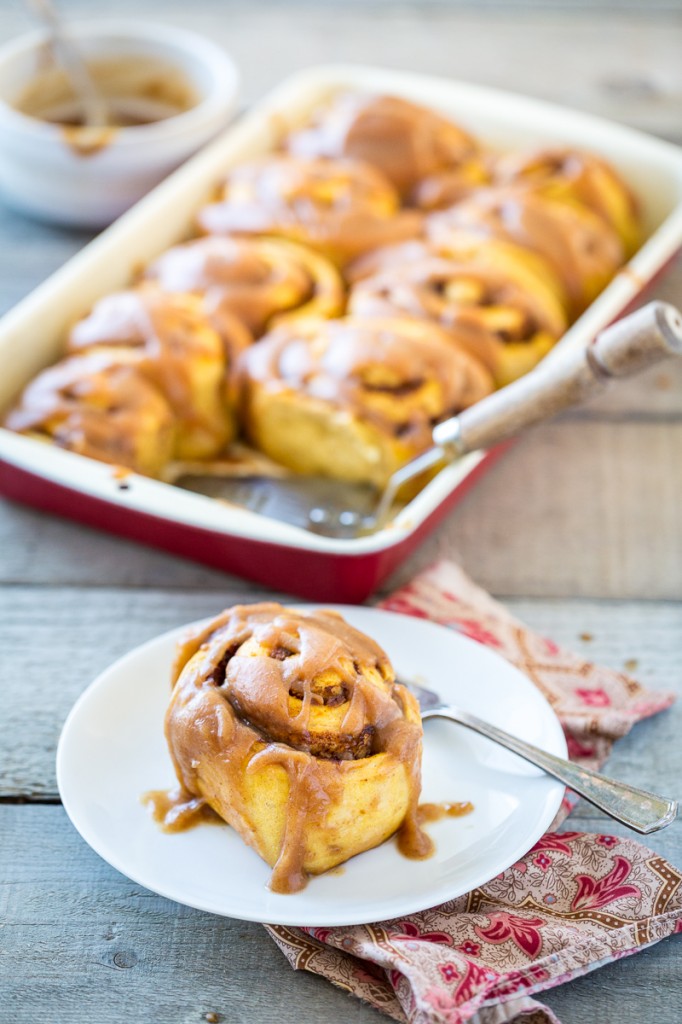 I just want to start off with telling you all that these cinnamon rolls are not gluten-free. I made them before I knew for sure that I had to remove gluten from my diet. They are, however, ridiculously decadent and delicious. 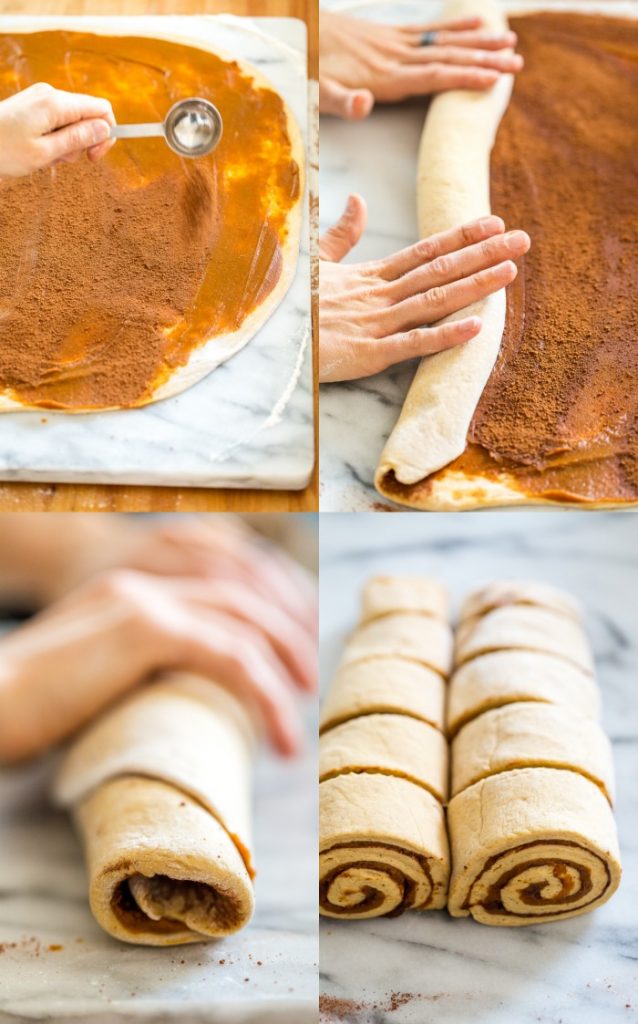 Now, to totally switch topics... There's an episode of Girls where Lena Dunham tells her cousin that she wishes they had been the kind of cousins that had all of these special memories and inside jokes but they're not. They don't get along. This moment made me so glad and thankful for the relationships I have with all of my cousins. 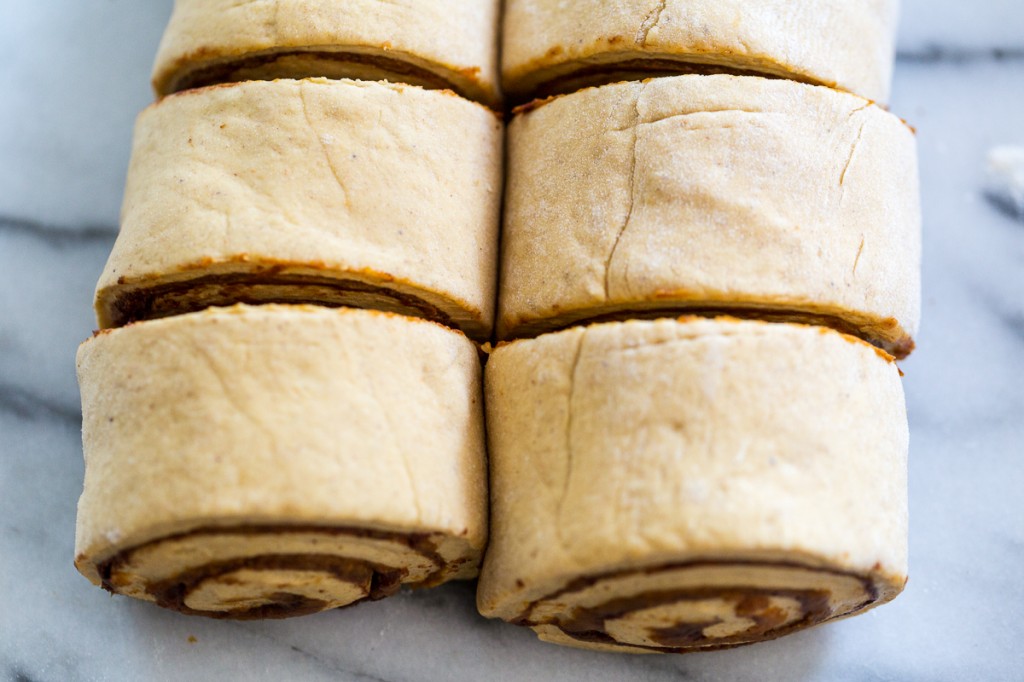 When I think of any one of my cousins, I feel like I'm thinking of a sibling. I have cherished memories with each and every one of them. The time Josh, Matt, and I spent a week backpacking through Italy. Riding around on the 4-wheeler with my cousin Brandonn, discussing the lyrics to the song, Breakfast at Tiffany's. Going to high-school for a year with Stephanie. Holding Sarah the day she was born (and now she's all grown up and works as a teacher! How can that be?!). 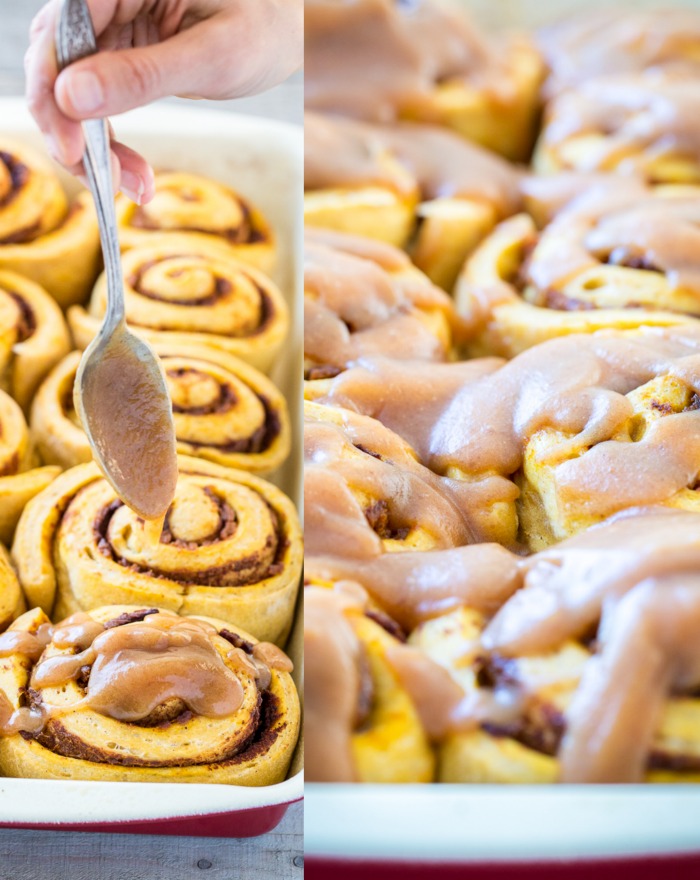 Today is my cousin Bridgette's birthday. I have plenty memories with her too- arguing as children over whether you put your underwear on over or under your tights (It's totally under, Bridge!). Pushing her around in a stroller as if she was my baby (I couldn't have been more than 8). Staying up late, helping her with decorations for her daughter's 1st birthday party. 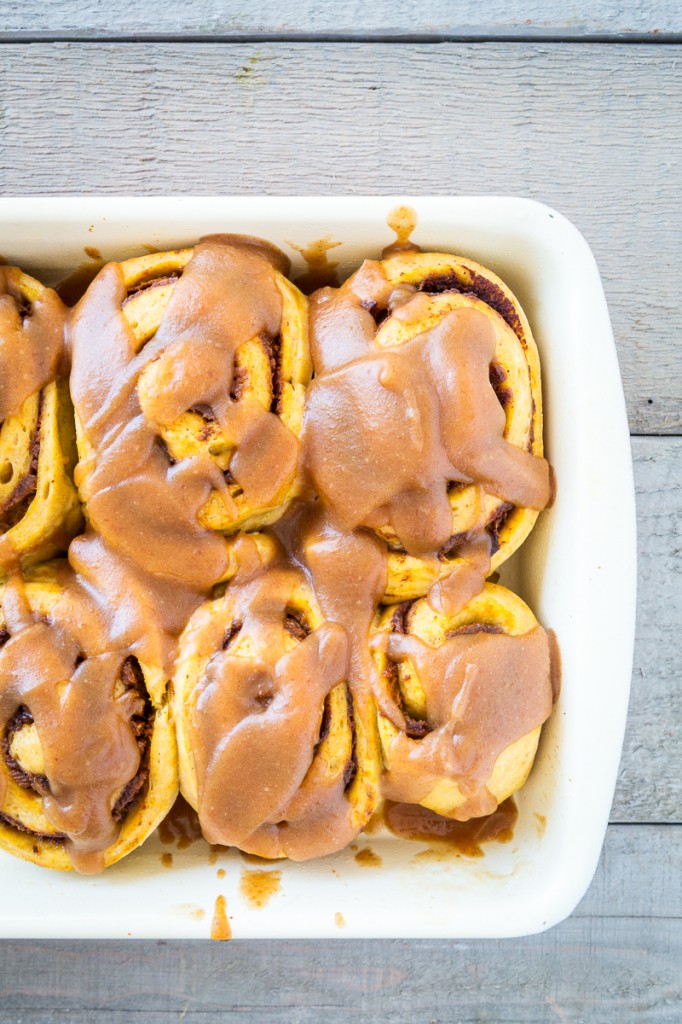 I've always loved Bridgette but in the last few years, my feelings for her have grown into true admiration. I've loved seeing the woman she's become since giving birth to her daughter. She's an amazing mother and has a truly gifted way with children. Her dedication to our family is truly awe-inspiring. When my grandmother's health began to decline, Bridgette was there to visit her as often as I wish I could've. She kept me filled in with every development of her health. When my grandmother passed, Bridgette was the first family member I talked to about it. Now she helps my grandfather out with things he may need help with and goes over to his house to keep him company. I feel blessed to be related to this person and so grateful for all that she does. 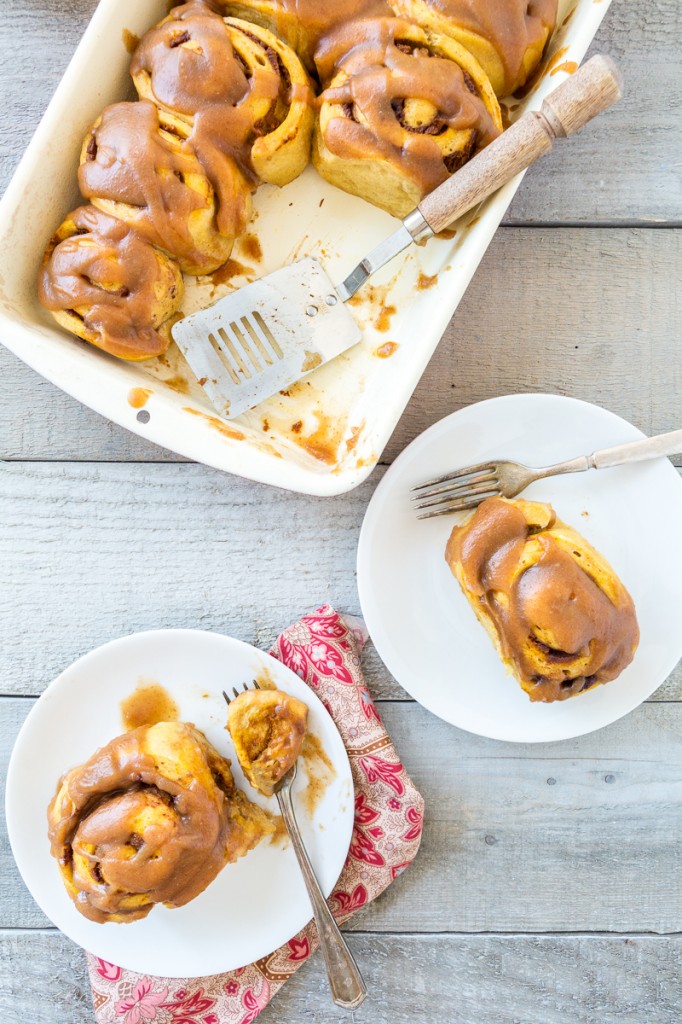 Bridgette and I are both a little (a lot) obsessed with cinnamon rolls. Namely, the cinnamon rolls from Cinnaholic in Berkley. We both follow them on Instagram to check out their daily specials and we text or tag each other whenever they share something that sounds especially delicious. So naturally, in honor of her birthday, I made cinnamon rolls. 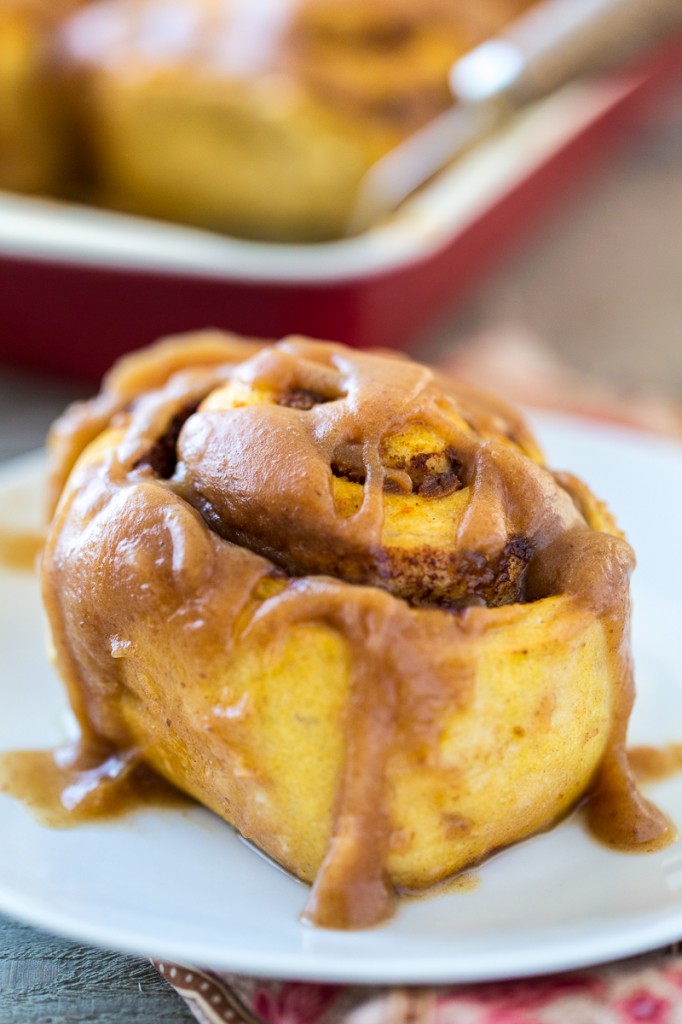 These pumpkin cinnamon rolls are adapted from the cinnamon rolls that will be in my upcoming book. These ones contain pumpkin in the dough and are filled not only with cinnamon and coconut sugar, but with a generous spread of pumpkin butter. You could eat them as-is and be happy as a porcupine, but why stop there? I've made a thick, gooey salted caramel glaze, made with dates, that you can drench your roll with. You might be able to contain yourself but I totally lost my cool over these rolls. 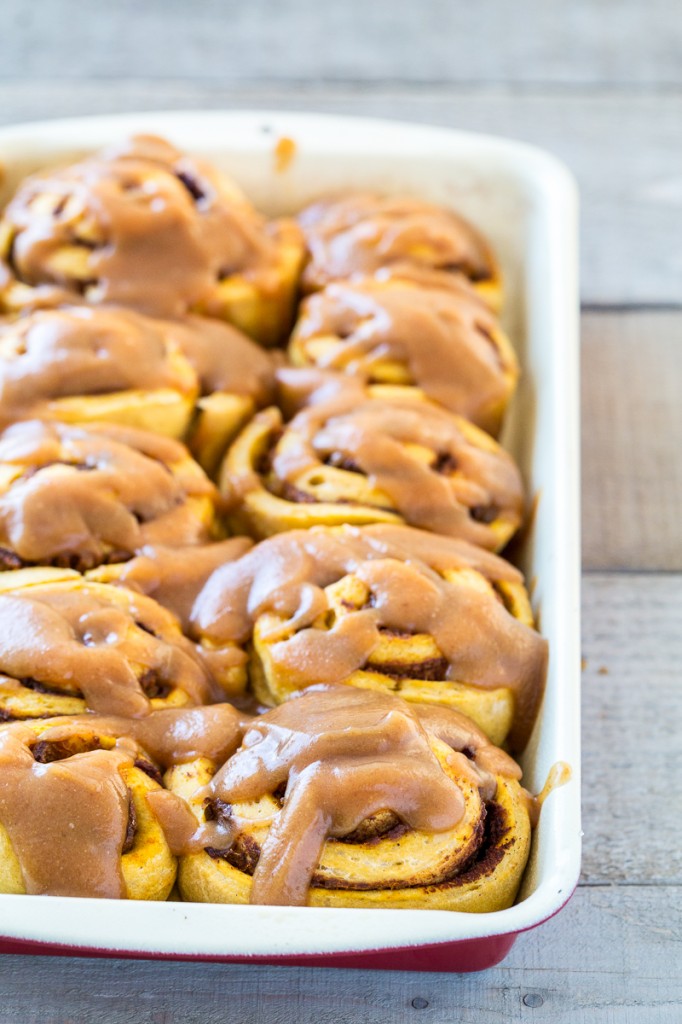 They're soft, doughy, cinnamony, full of sweet pumpkin flavor, with a gooey filling, and topped off with salty caramel-ness. And they give you magic powers. One of these descriptions is not true but you'll have to make them to find out which one. 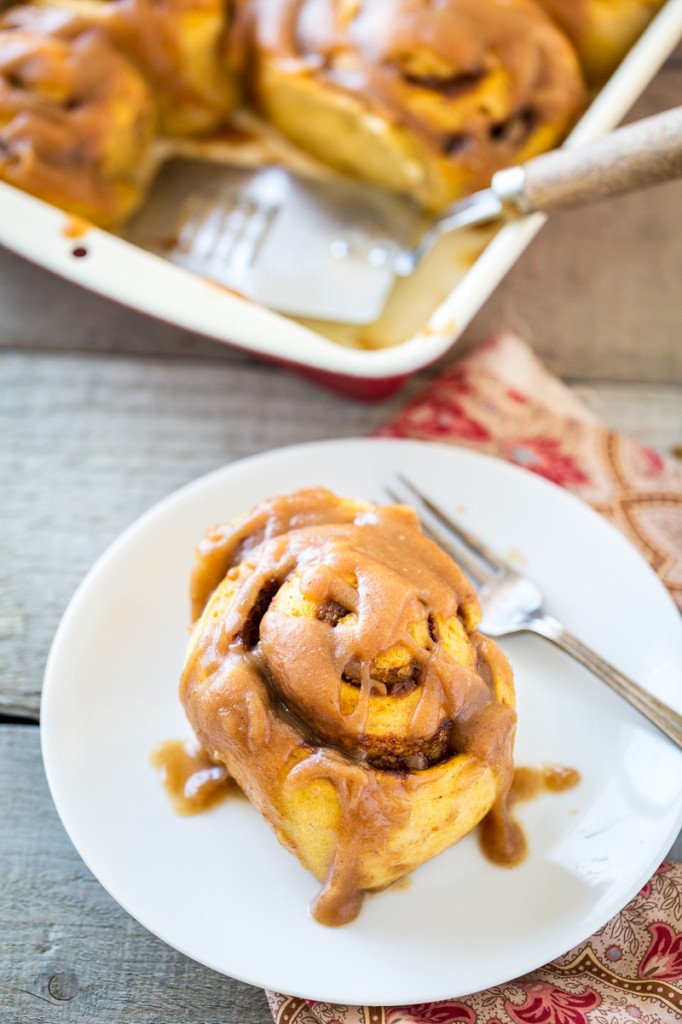 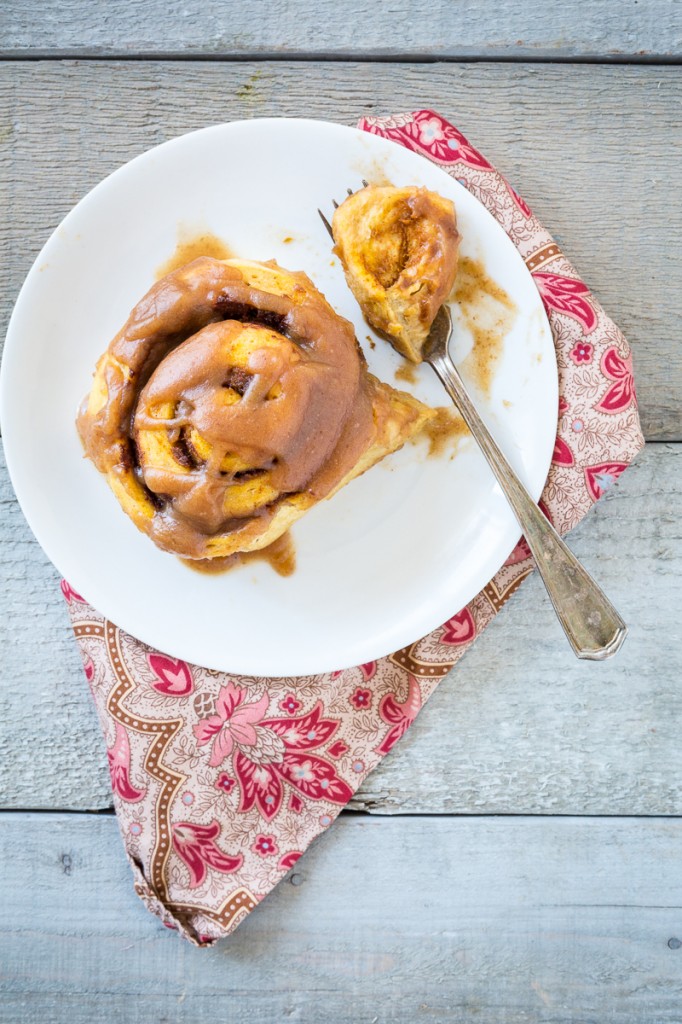