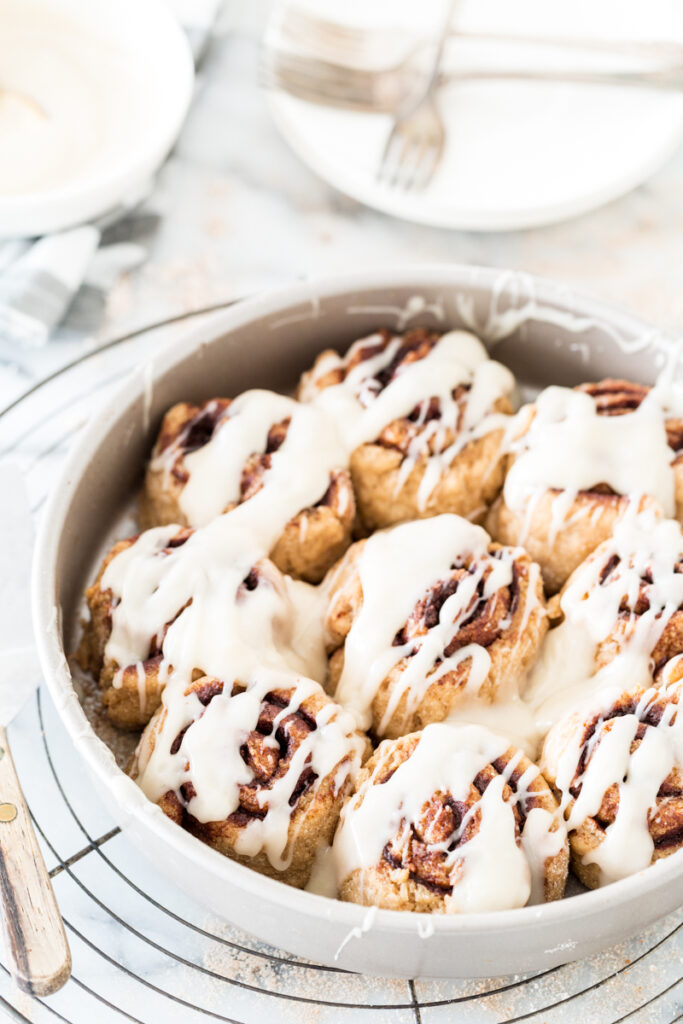 I wish I could put this recipe for Gluten-Free Vegan Cinnamon Rolls down as a Christmas Miracle but that would signify that this recipe just happened suddenly, miraculously, on its own. But that's not how this went down at all. 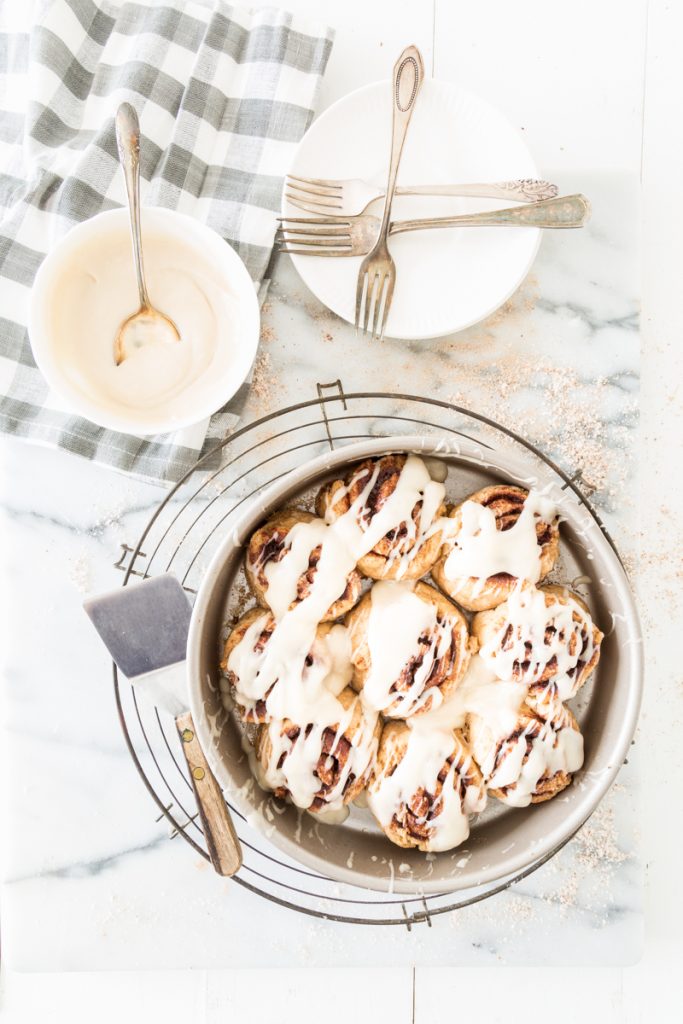 In actuality, I've tested this recipe, tweaking it each time, no less than 25 times. I lost count after working on it for a year. I've probably tested this recipe more than any other recipe I've ever created. That's why this day, being able to share this recipe with you, is so exciting an meaningful for me. 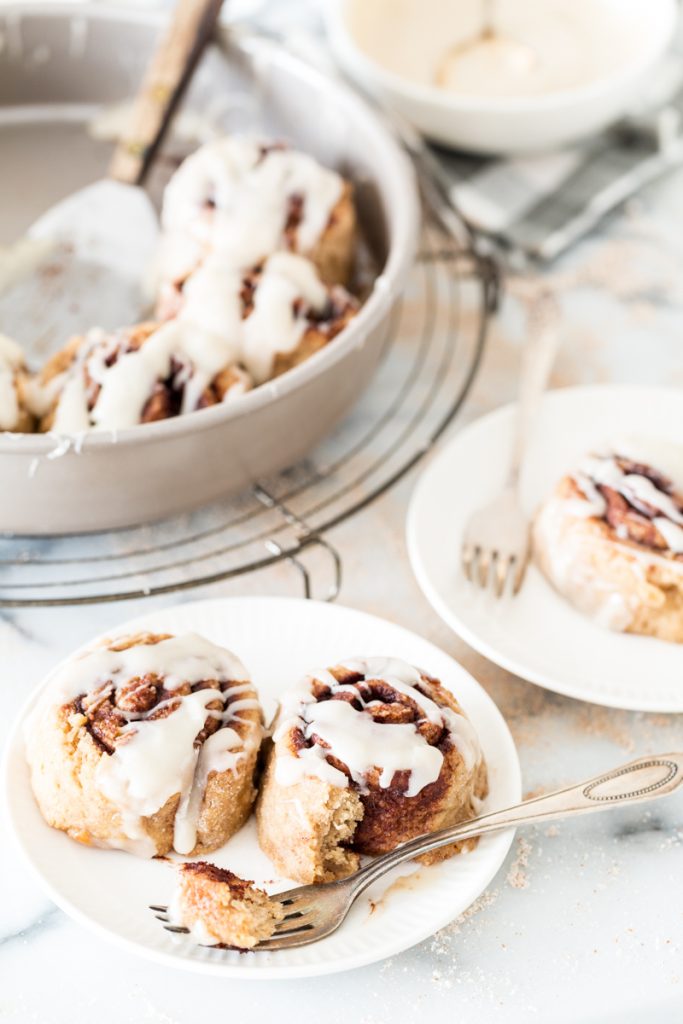 I'm going to say this right now: If you and your loved ones have no problem eating gluten, then you should absolutely make gluten-full cinnamon rolls. I have a wonderful recipe in my first book for Pecan Date Cinnamon Rolls and I even have a recipe for Pumpkin Cinnamon Rolls here on the blog. If you're looking for a more traditional cinnamon roll, use the dough recipe for the pumpkin cinnamon rolls and substitute the filling for the filling used in these rolls and the glaze for the cream cheese icing here. Gluten-free dough is a bit more finicky (and requires a few more ingredients) and if you can get away with eating gluten, then you should absolutely do so. But if you can't, then these beauties are the perfect replacement. 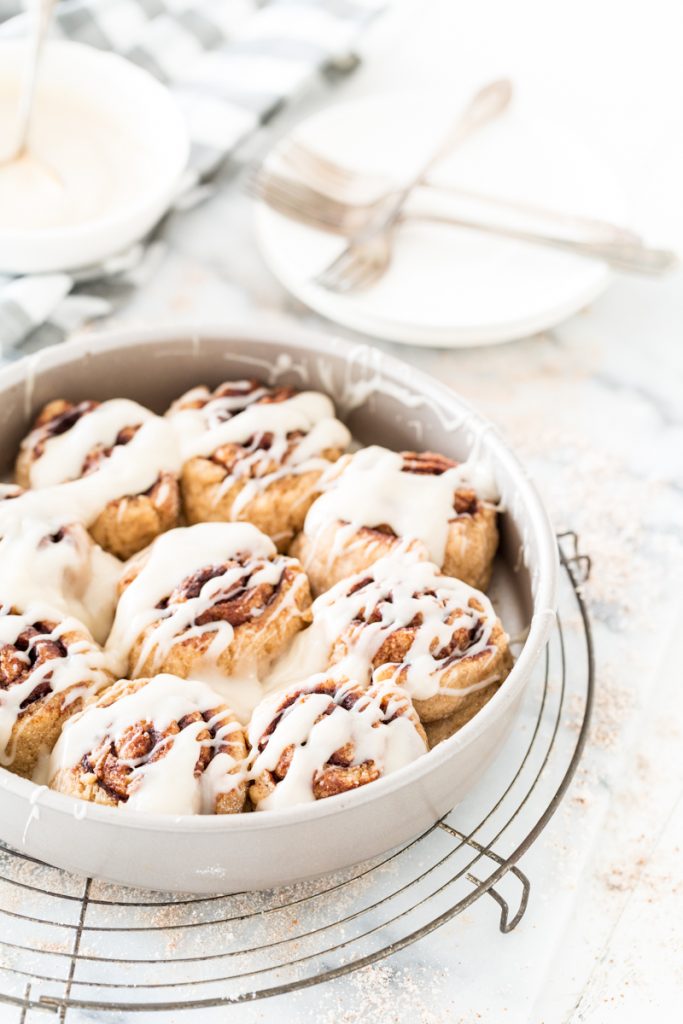 For my fellow compadres who can't do gluten, then this recipe is for you. Before baking, please read these tips:

FORGET EVERYTHING YOU KNOW ABOUT WORKING WITH DOUGH. If you're used to working with beautiful, stretchy, pliable gluten-full dough, then you're in for a surprise when working with gluten-free dough. For one thing, when you're first making the dough, stirring in flour bit by bit, you're not going to add flour until you have a soft, pliable, non-sticky ball of dough. If you do that, the dough will not rise as much and will provide you with Stiff Little Rolls (SLRs). You want to add flour just until a ball starts to form but it's still mushy and sticky. The dry ingredient mix for this recipe is just over 3 cups (3 cups plus a few teaspoons of other ingredients) and I usually only end up needing to use 2 1/2 cups plus 2 to 3 tablespoons. Then, after the dough has risen, you still need to be careful with how much you work the dough before rolling it out. You'll want to coat the ball in flour (I just use what I didn't add to the dough initially) and then flatten it out and fold it over on itself about 3 to 4 times, each time gently coating the ball in flour. If you overwork the dough at this stage, you're going to be looking at SLRs. After you've rolled the dough out (while it's covered with plastic wrap), you're probably going to want to use a dough scraper or spatula to help you with rolling the dough because it may stick in places. I always roll a little bit, gently but quickly scrape the next section, and roll a little bit more. If the dough breaks or tears, don't fret. Use your fingers to gently "smoosh" it back together and keep on going. 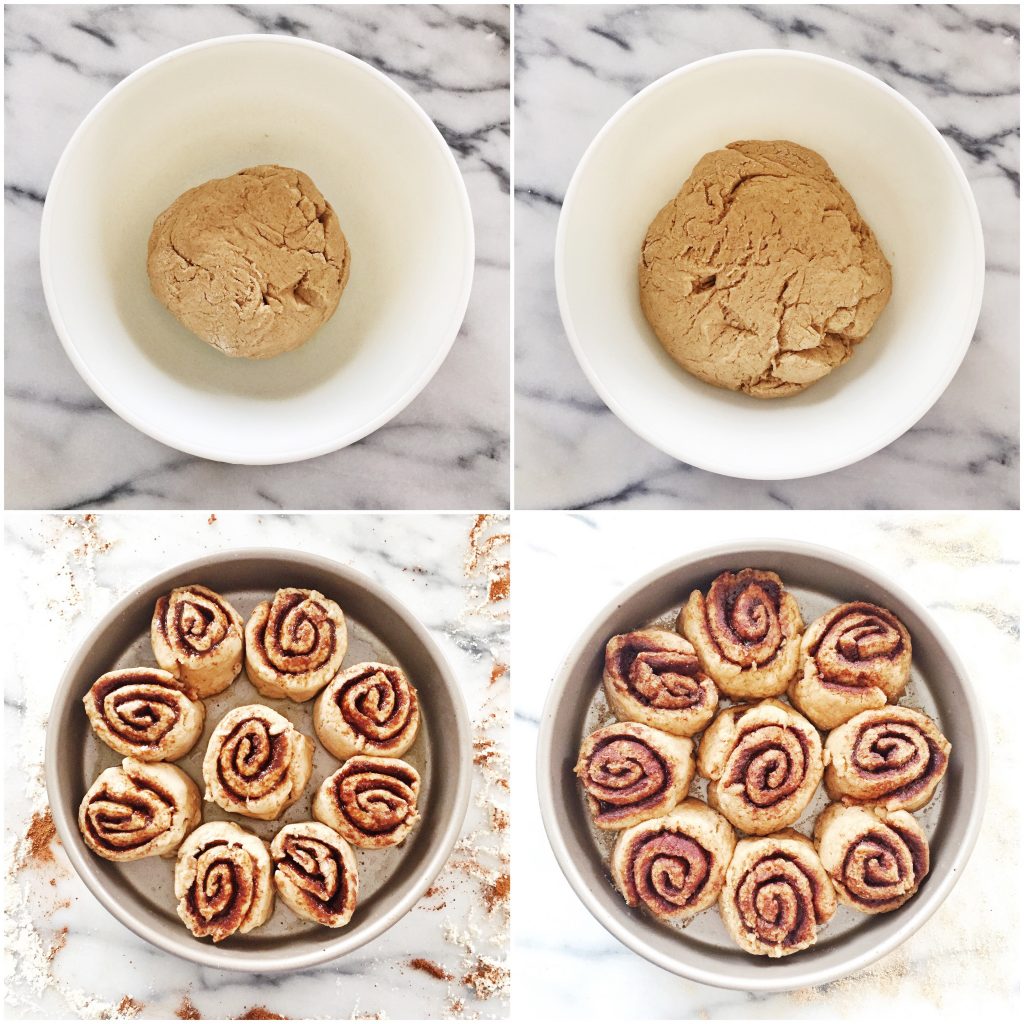 GET TO KNOW YOUR GUMS. I don't mean that in a dentist-y sort of way. The first 20 or so times I tested this recipe, I used xanthan gum as the binder/gluten-replacement. Actually, The first 20 times-ish, I used a store-bought gluten-free flour mix that contained xanthan gum. Those rolls were okay but the taste and texture weren't quite right. So I decided to do a mix of flours. Earlier this year, moths infested my flour/grain cabinet and I had to throw out almost ever flour and grain I had on hand and by new moth-proof jars. During that ordeal, I had to throw out my xanthan gum but I'd never re-stocked it. So I found myself, creating my own mix of flours for this recipe and when I went to add xanthan gum, I cursed the moths again once I realized what I'd done. So I reached for the guar gum, fingers crossed that this whole batch wasn't going to be a waste. And you know what happened? My rolls spread like nobody's business and they looked amazing. This is when my luck began to change. My only problem with this batch was that the dough was a little spongey and while the dough spread, they stayed flatter that I would've liked. On the next trial, I tried the same flour mix with xanthan gum and I was back to SLRs. So I tried less xanthan gum. Still, I was not happy. It wasn't until I created a mix of guar gum and xanthan gum that I got results I was happy with. The guar gum lets the dough expand while the xanthan gum keeps them from flattening out or collapsing. After a few tries, I found that 1 teaspoon of guar gum and a SCANT 1/2 teaspoon of xanthan gum was exactly what the doctor ordered. And I have the moths to thank for this discovery. 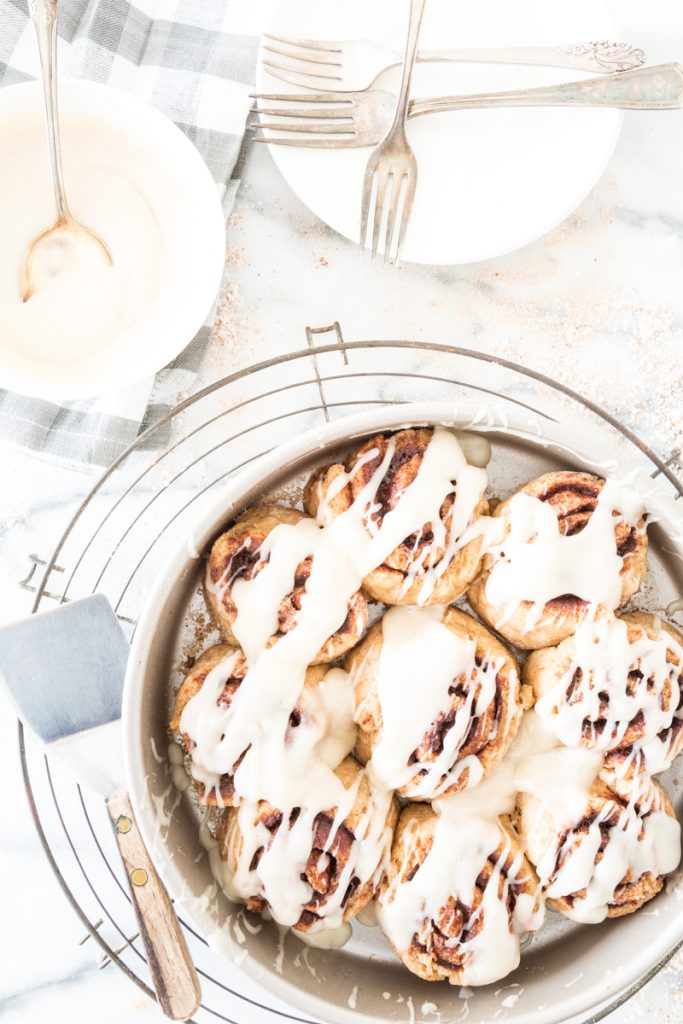 SAY GOOD-BYE TO STORE-BOUGHT GF FLOUR MIXES. At least for this recipe. I actually use them a lot for my cookies and other various things. But this recipe really needs a specific set of flours: Brown Rice Flour, Sweet White Rice Flour, Sorghum Flour, Almond Flour, Arrowroot Powder/Starch, and Potato Starch (not Potato Flour). If you can't find Sweet White Rice Flour, Stone-Ground White Rice Flour will work instead but I prefer the flavor and texture of the Sweet WRF. I've tried using Tapioca Starch in place of the Arrowroot Powder and actually found that the Arrowroot provides better stability. I also throw in baking powder for back-up rising power. It's also important to  note that when you're measuring the flours out, that you use a spoon to add the flour to the measuring cup and gently level it off. Scooping the flour with the measuring cup will result in too much flour and thus SLRs.

LET YOUR YEAST FULLY ACTIVATE! I like to use a 2-cup measuring cup, heat the milk for 40-45 seconds in the microwave, and then use a candy thermometer to make sure the temperature is at 110° F. Then I add the coconut sugar and then the yeast. Then I gently stir it together with the thermometer. Then I let it activate (and by "activate," I mean bubble up and foaming like a mad-science experiment) until it starts rising over the top of the measuring cup. When it's been about 10 minutes or so and it looks like it's about to overflow, it's ready to add to the mixing bowl. 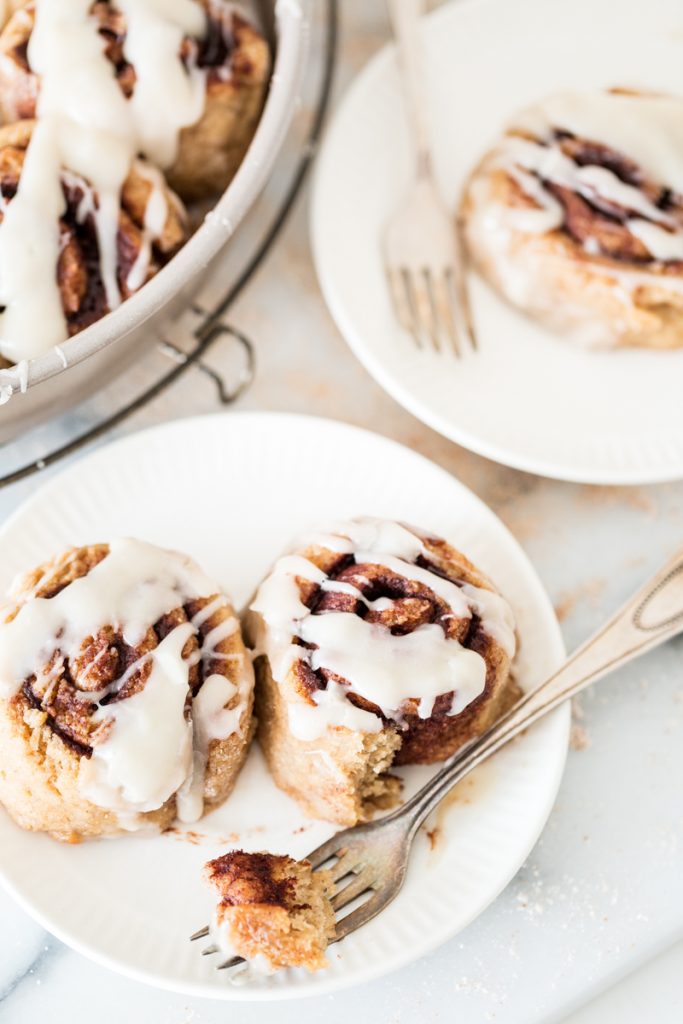 Unfortunately, this isn't one of those "30 minute" recipes. This recipe needs some time. You're going to need to give the dough about 60 minutes to rise. Not only is this when the yeast is making the dough rise, it's also giving time for the gums to start doing their magic as well. Then they need about 10-15 minutes from the time they've been sliced into rolls and put in the pan before they go in the oven. Now that I have the recipe down, I will do more tests with shorter rising times. I'm hoping I can do a 30 minute rise for the dough and then 30 minutes for the rolls to rise/expand, but we'll see. I'm also planning on testing out if any part of the process can be done the night before. I will post updates as the testing goes on. If you try anything that works, please post about it in the comments! 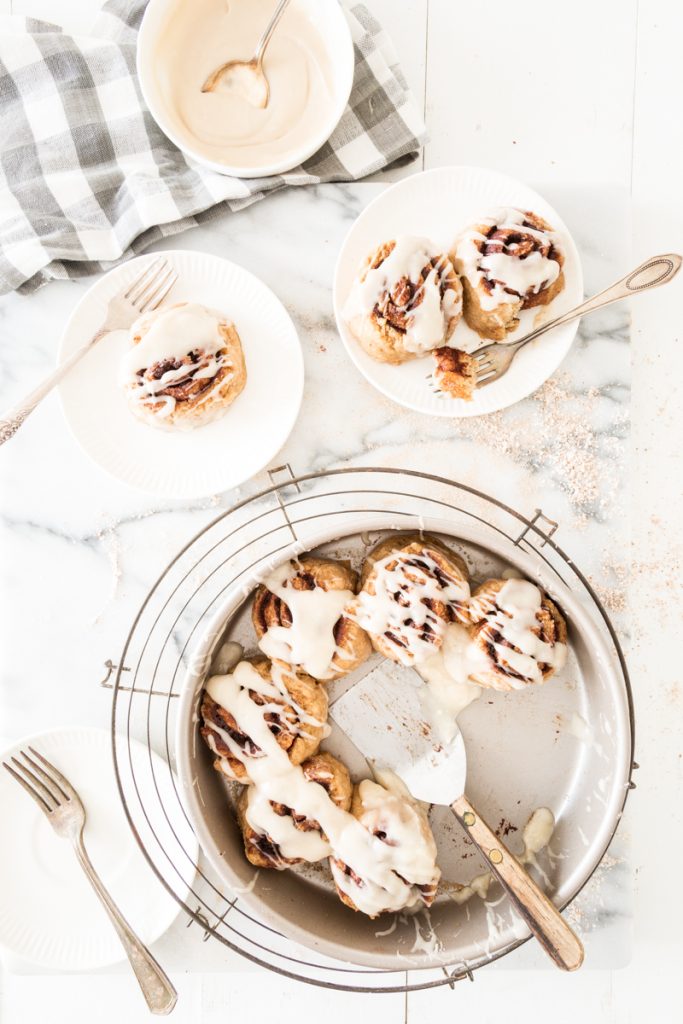 With this, I bid you adieu and wish you good luck in your gluten-free vegan cinnamon roll adventures. May your brunches be full of these warm, soft, doughy, cinnamony-sugary rolls and doused in cream-cheesey icing goodness. Happy holidays! 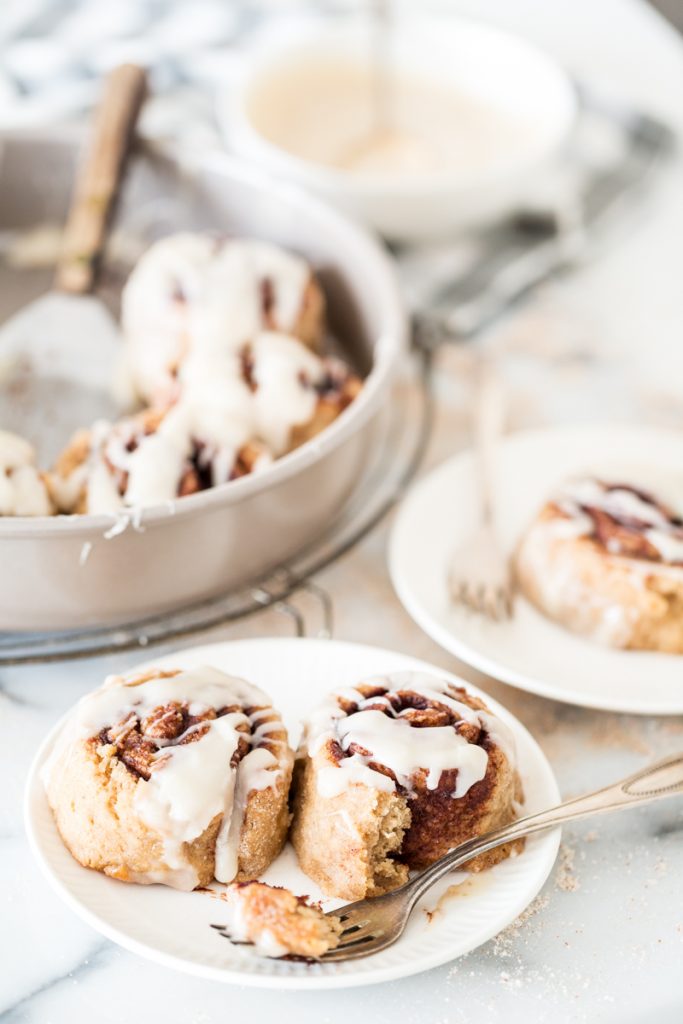 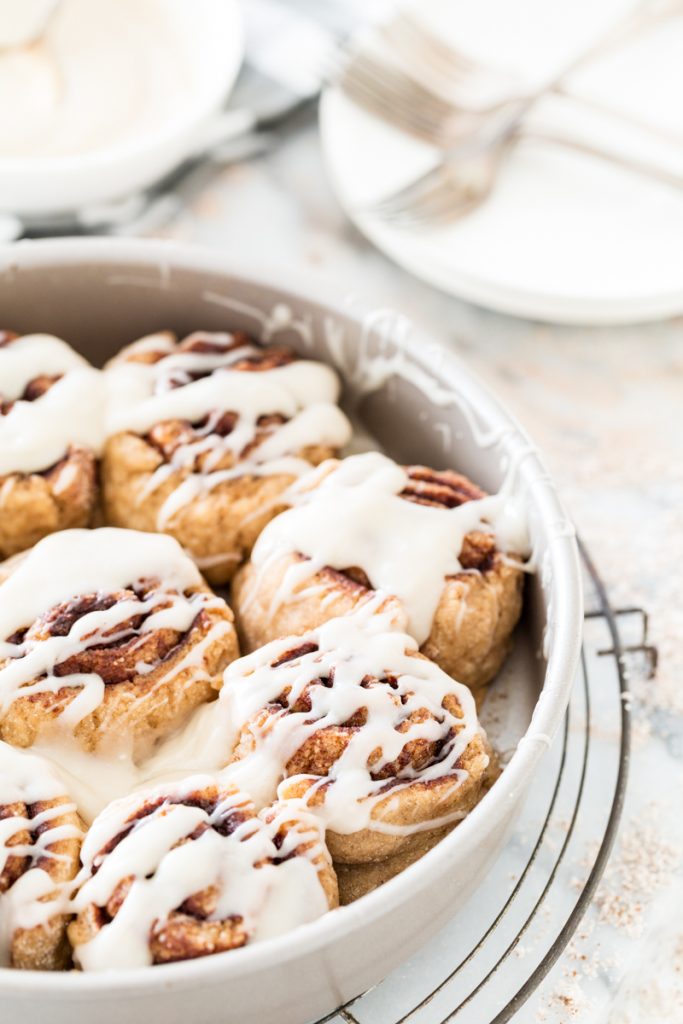 What do you have planned for your holiday brunch(es)?