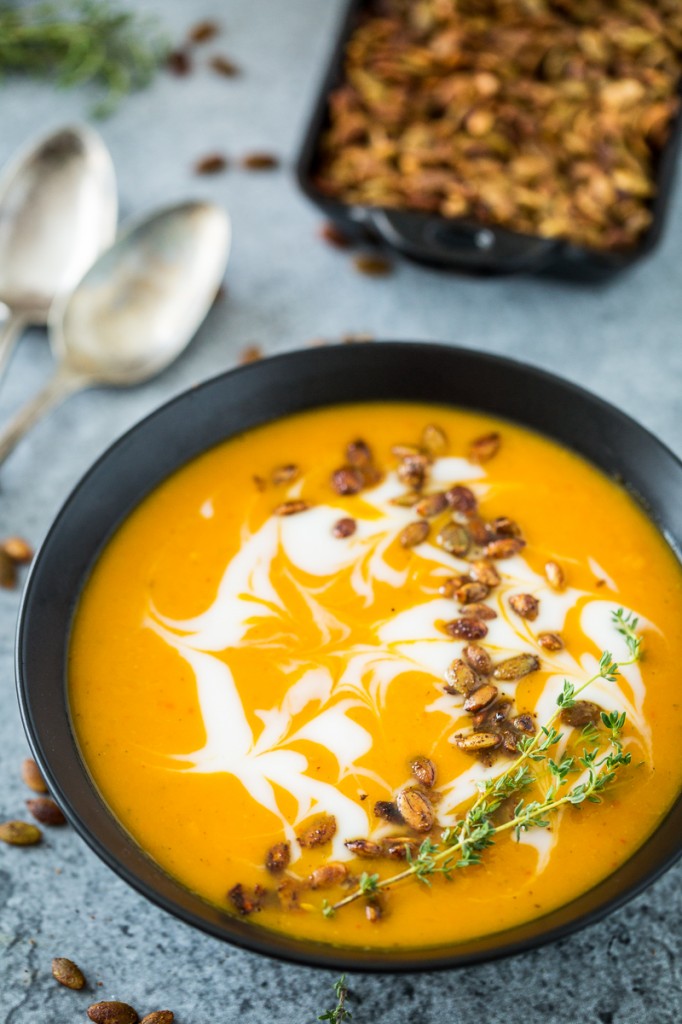 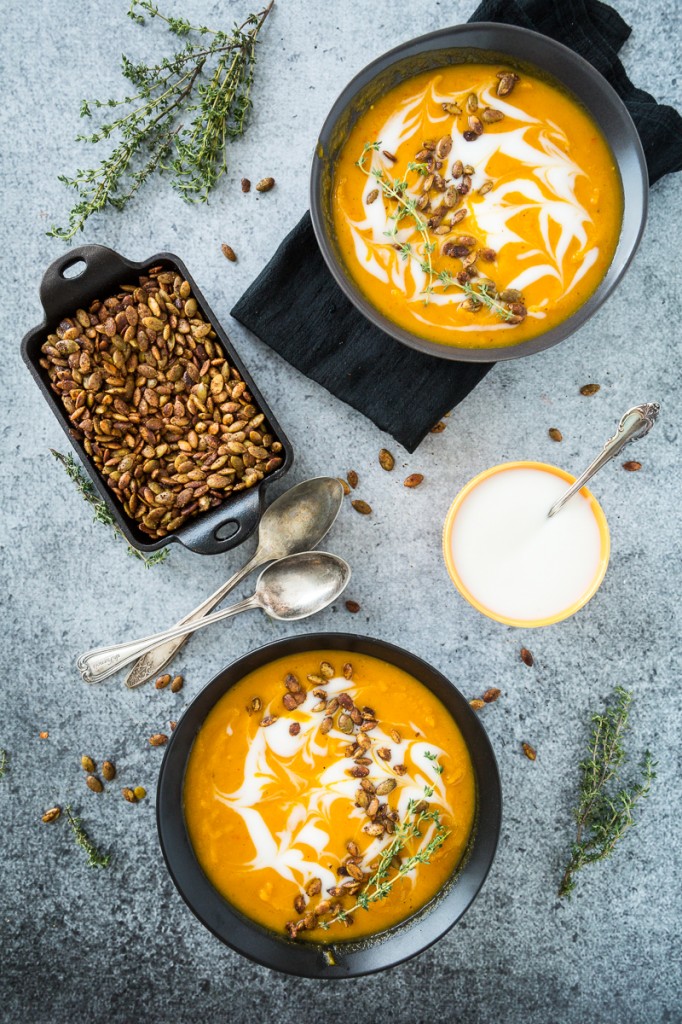 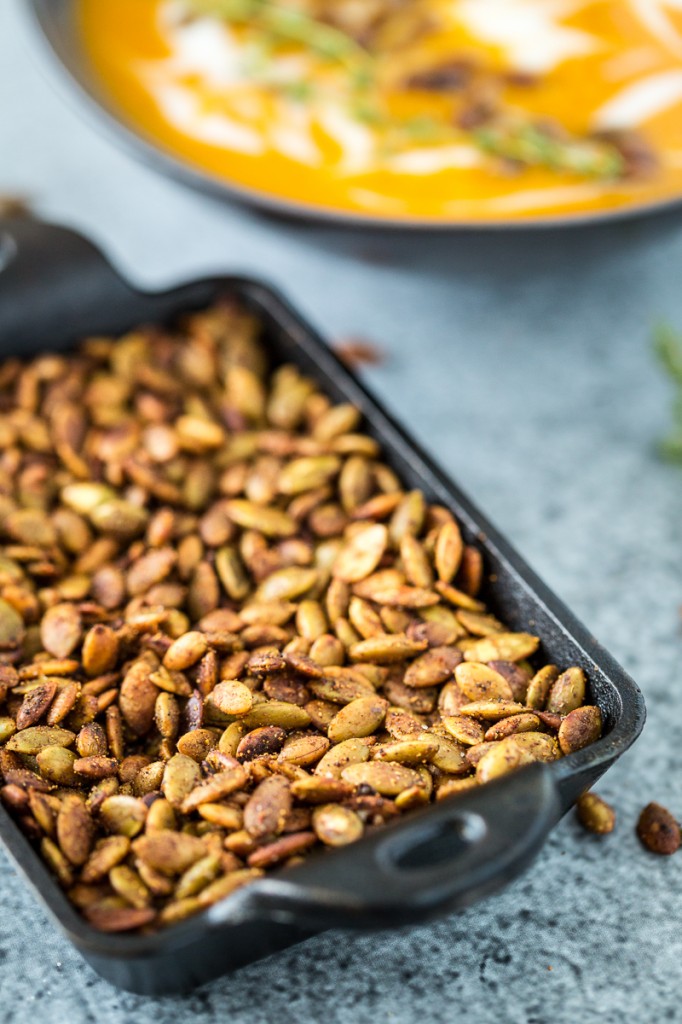 I'm actually surprised with myself that I haven't posted a butternut squash soup before now. Butternut squash soup was the first soup I ever just whipped up from scratch using ingredients I had on hand and has continued to be one of my favorite types of soup ever since. 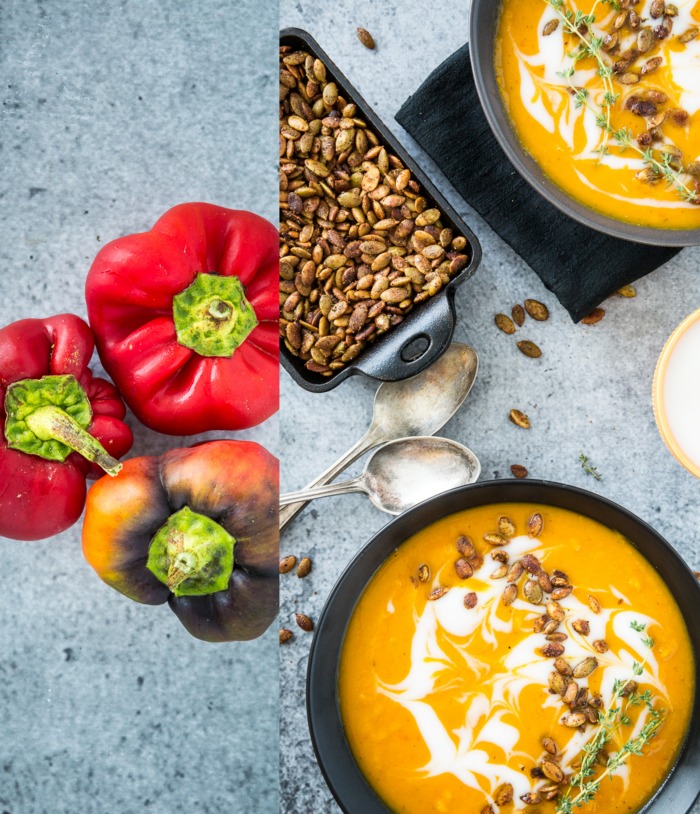 It makes me smile when I think of my 24 year-old self, standing in my apartment's kitchen that was terribly ugly and beige and looked just like the other 200 kitchens in that apartment complex. I'd had a butternut bisque at a friend's wedding a few weeks prior and couldn't get it out of my mind. I'd never made a creamy soup before but I watched a lot of Food Network back then so I felt fairly prepared to pull a soup together. I'd bought a butternut squash for the first time earlier that day and was enthusiastic about getting this soup going. 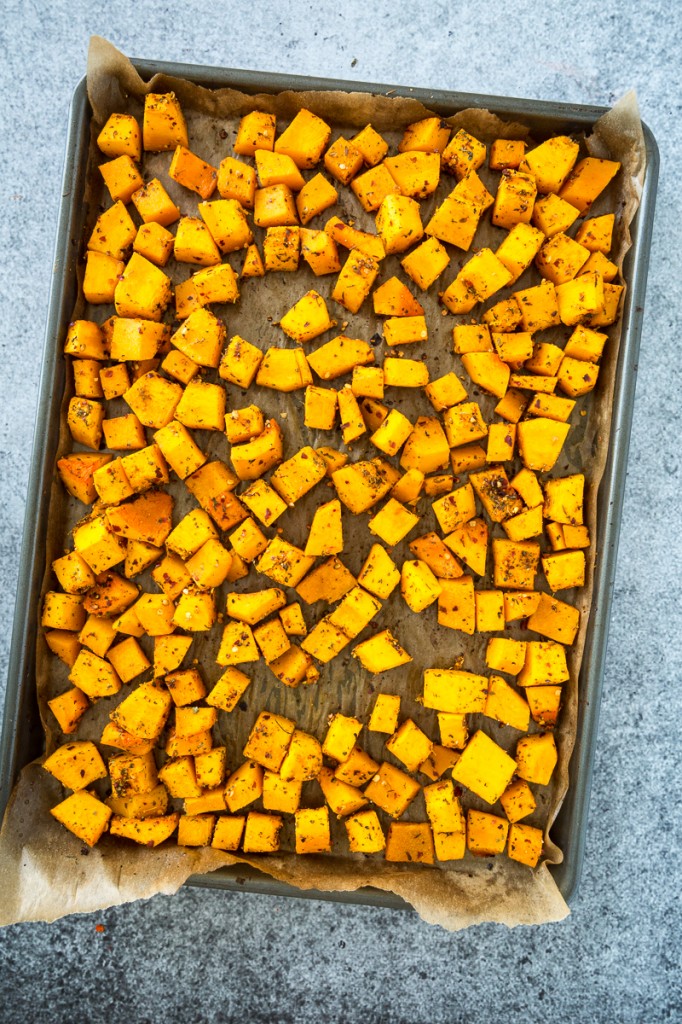 I laid out a bunch of ingredients on my beige speckled formica countertop. Things that were in my fridge that I could imagine Giada DeLaurentis using in similar soups: Carrots, an apple, store-bought vegetable broth, an onion, butter, and some non-fat milk (this was in my pre-vegan days). Cutting that butternut squash in half for the first time ever was maybe one of the scariest moments of my life. The whole time, I kept saying to myself "Don't cut your fingers off. Don't cut your fingers off." I came away with all my digits and a new respect for quality knives. I roasted the squash with some butter and brown sugar, cinnamon and a few other spices (just like I'd seen Ina Garten do once). Once the squash was roasted and the ingredients had simmered in broth for awhile, then came the time to add the milk and blend into a smooth concoction. I hadn't thought this step through and I soon realized that all I had was my mini food processor. 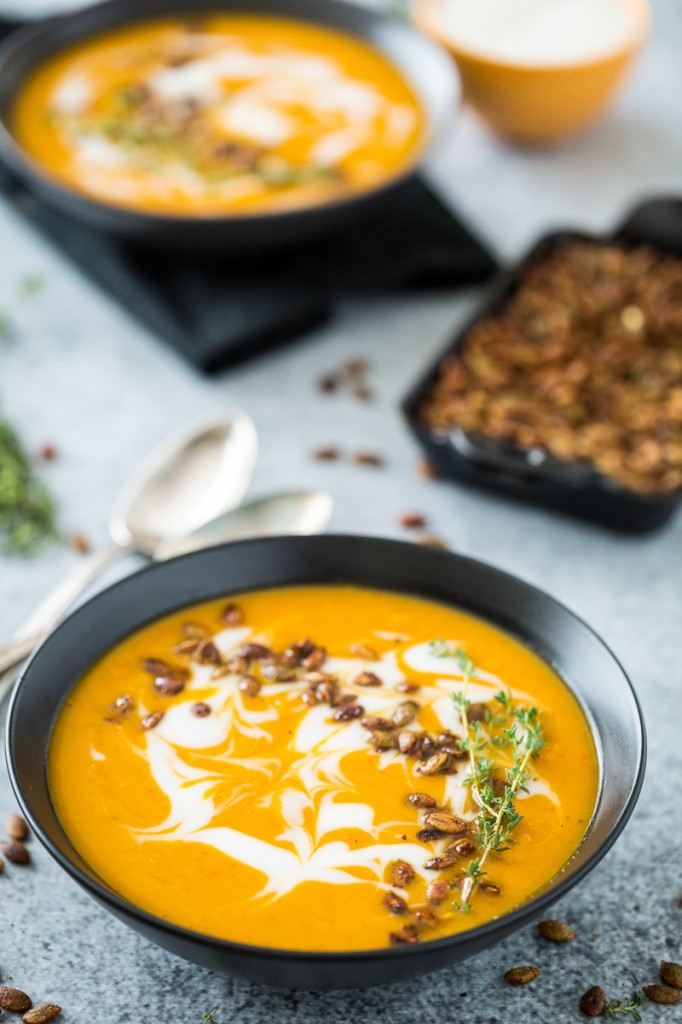 For the next 15 minutes, I would scoop 1 cup of soup out of the pot, pour it into the tiny little food processor, meant only for chopping veggies, and hold the pulse button down until the soup was smooth and creamy (ignoring the machine's inability to keep all liquid inside and that my kitchen walls were slowly being covered with orange splatter marks). Soon enough, though, the soup was finished. Sitting down to eat that soup was one of the most rewarding experiences in my young adult life (Now that I'm no longer in my 20's, 24 seems to be a "young adult" age). I had created and made a creamy soup all by myself. Little did I know that later in life, creamy soups would be a regular fall and winter staple in my house! 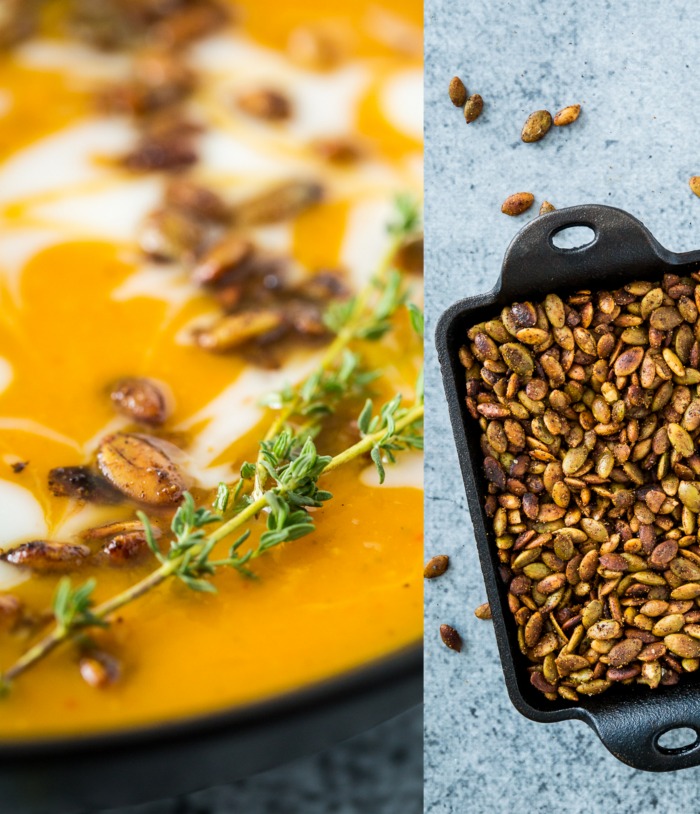 This butternut squash soup is quite different from my first. While it still has the sweetness from the squash, the fact that it's roasted in a harissa spice blend makes it nice and spicy. The swirl of yogurt sauce into the soup balance out the spiciness and lends that extra bit of creaminess you might be craving. And the pepitas toasted in garlic, cumin, and smoked paprika? Well, they add a bit of crunch to each bite and a salty, savory flavor to contrast. It just as decadent and luscious as it looks too. I can't get enough. If only my 24-year old self could see me (and my non-orange splattered walls) now. 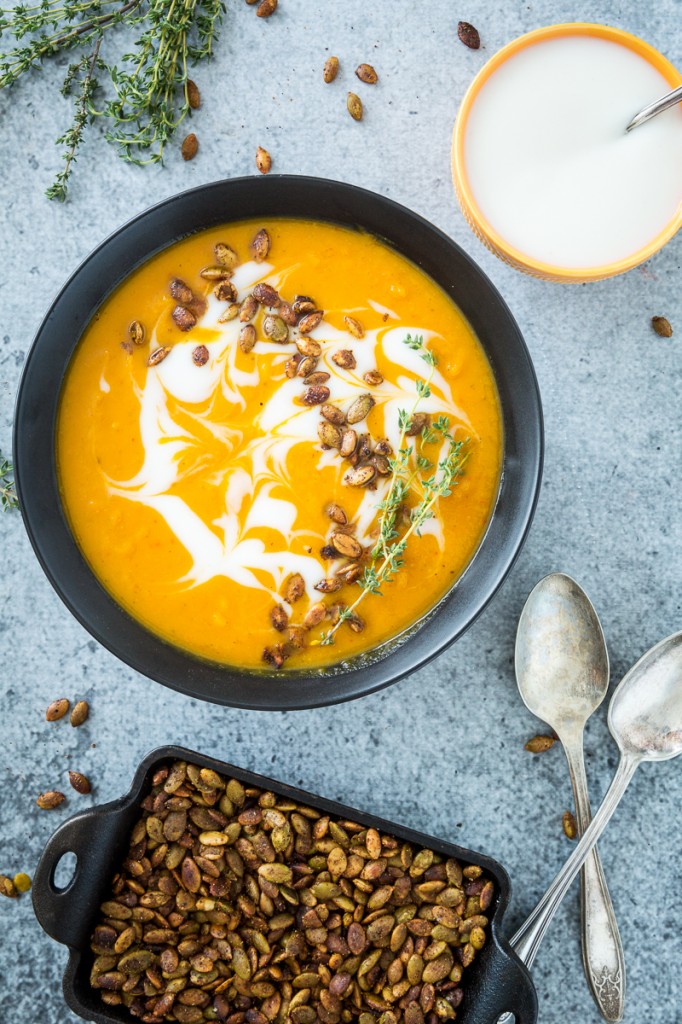 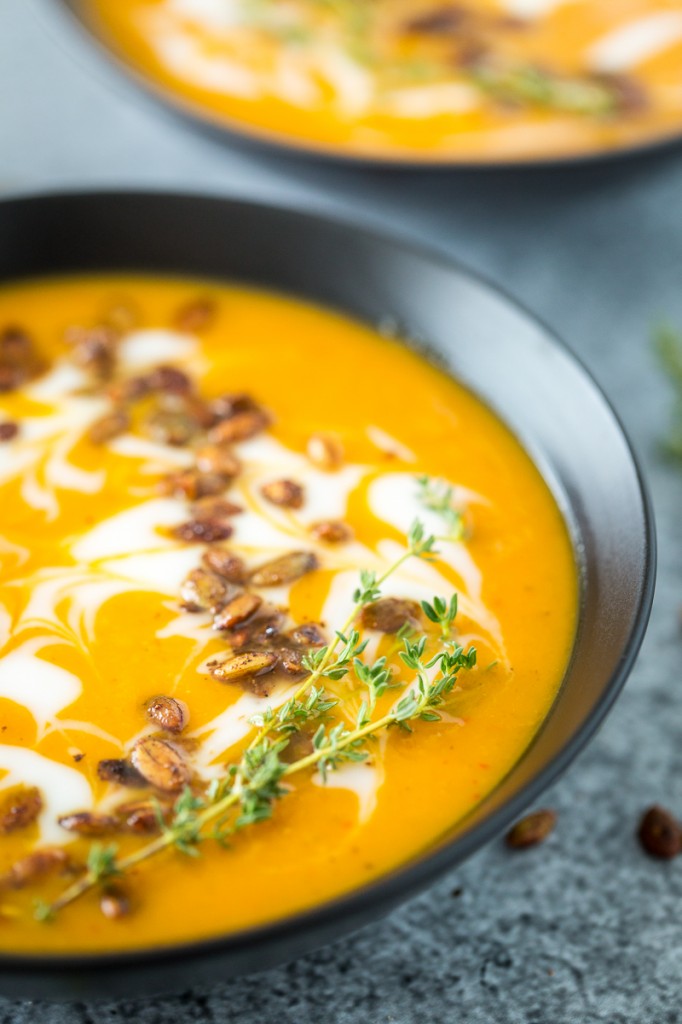 What is your favorite soup to cozy up to on a cool fall evening?