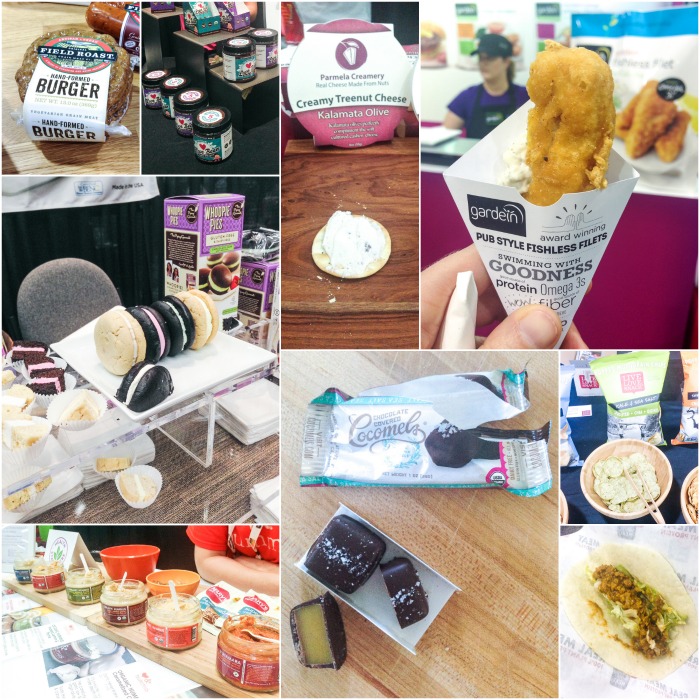 Over a month ago, Chris and I attended Expo West, a natural products convention that lasts for about 4 days in Anaheim. We only went for 1 1/2 days but we walked away having got to try some really amazing stuff (and to be honest, some not so amazing stuff). I was amazed at the number of vegan products there! It was very encouraging to see the vegan movement growing. We brought home a ton of samples. 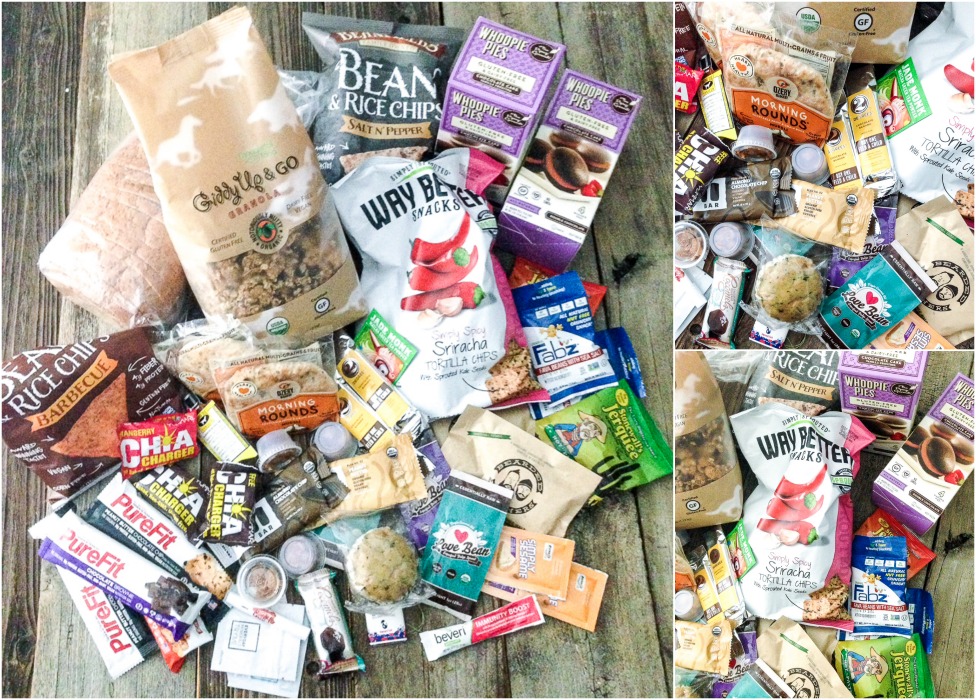 I’m sure you all have seen reviews of the expo and have probably already heard about all of the new products I’m about to mention but I figured it would be fun to share it anyway. Here are our top 12 vegan finds at Expo West this year.

12.  Neat– I’ve seen plenty of blogger reviews of this product recently and the reviews are totally right: This stuff is legit. If you can get your hands on some of this vegan ground meat, I suggest you do so.

11.  Beyond Meat Beef-Free Crumbles– I’ve mentioned before that I am a fan of Beyond Meat and their Taco Beyond marketing strategy was the definitely the best at the Expo, hands down. They served their new beef crumbles up in soft tacos and vegans, vegetarians, and omnivores alike were going crazy for it! 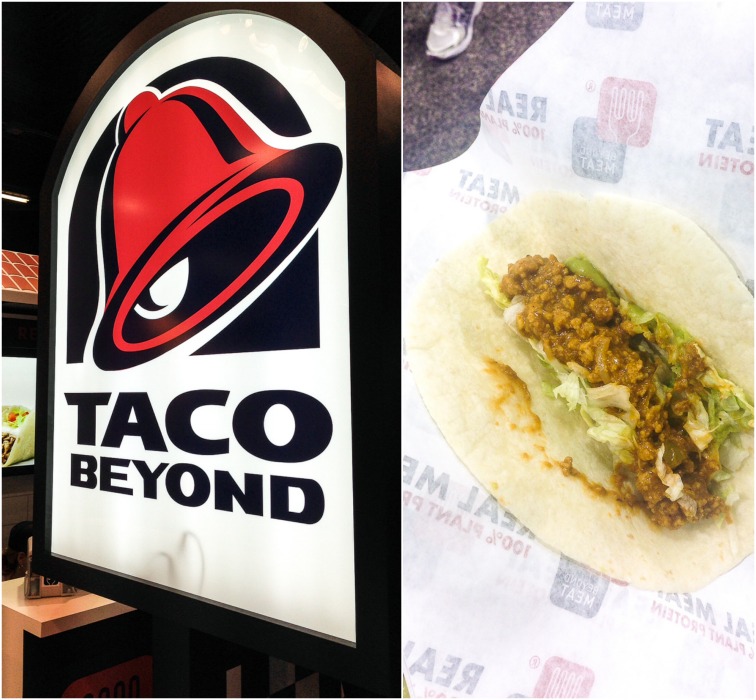 10.  Love & Hummus– Homemade hummus is the best hummus, in my opinion, but this jarred variety comes pretty dang close. I love that it is in glass jars rather than plastic tubs (because it’s greener and I love reusing cute little jars). The hummus itself is really, really good, has no weird stuff like citric acid, and comes in several wonderful flavors like Roasted Lemon & Thyme (my favorite) and Spicy Harissa (my second favorite). 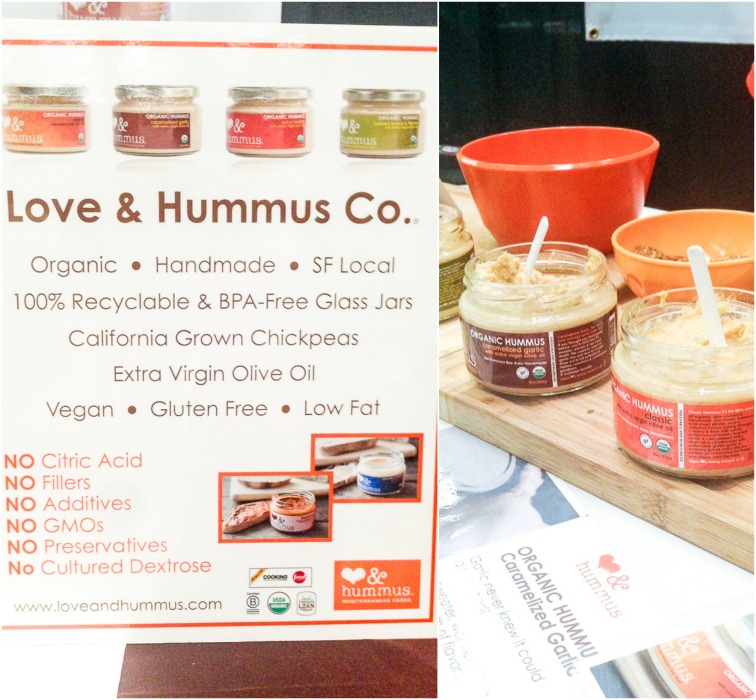 9.  Love Bean Superfood Fudge Spreads– You guys. This stuff. I wish there was a way to eat an entire jar and retain my dignity. These extra virgin coconut oil-based fudge spreads are magical. At room temperature, you can spread them like peanut butter. Or you can heat them up and use them like a fudge sauce on your ice cream (and rumor has it that it will turn into a crisp chocolate shell). 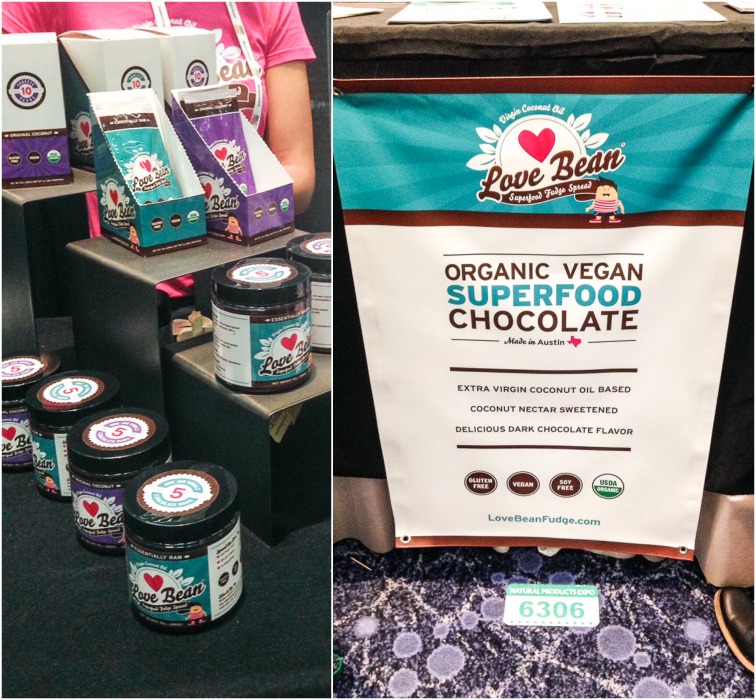 8.  DF Mavens Dairy Free Frozen Desserts– I love a good vegan ice cream as much as the next gal, but holy sweet delicious frozen desserts! They come in soy, coconut, and almond milk-based varieties and some are sugar-free! And with flavors like Peanut Butter Fudge Mash, New Orleans Salted Praline, Sicilian Hazelnut Truffle, how can they not be the best?

7.  New Chocolate-Covered Cocomels– Chris and I sometimes buy the 5-pack of Cocomels caramels to share and we always fight over the 5th one (or just cut it in half). Now that these are in the picture, things are about to get pretty sticky (pun intended). Seriously, I want Santa to fill my stocking with these come Christmas time. 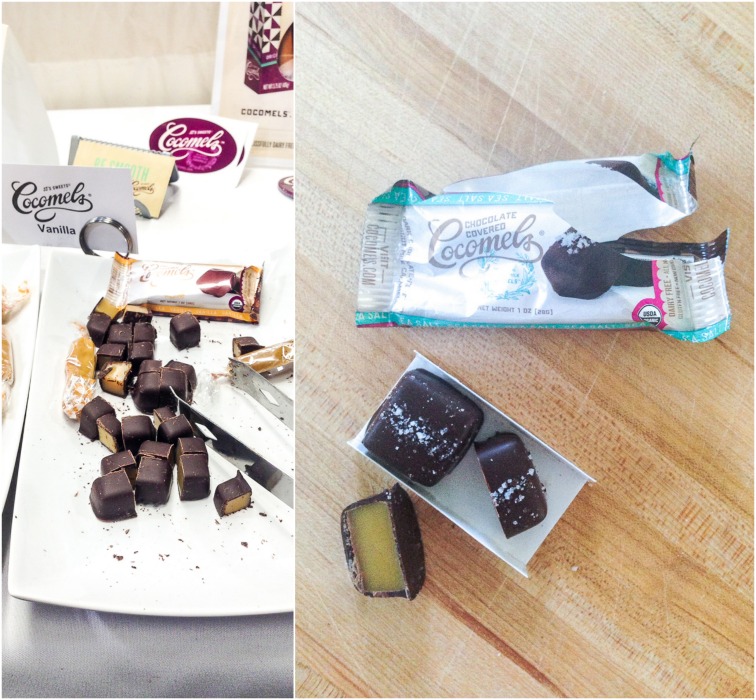 6.  Live Love Snack Kale & Sea Salt Popped Multigrain Chips– Kale seems to be the new “It” flavor these days. We tasted kale-flavored popcorn, muffins, and energy bars but these kale and sea salt flavored popped chips made from sprouted quinoa and chia seeds were my favorite. I love popped chips anyway, but I have a feeling these are about to be my new favorite. 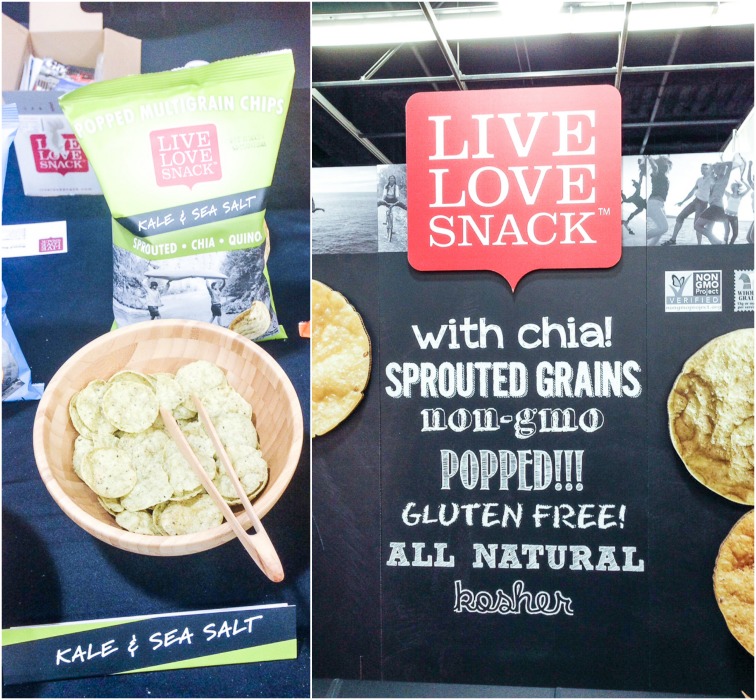 5.  Phoney Baloney’s New Coconut Bacon Flavors– You guys know how much I love Phoney Baloney’s coconut bacon. I use it all the time to make my Cheddar Bacon Dip, Maple Bacon Peanut Butter, and Chocolate Bacon Bark. Now they have new flavors like Chipotle BBQ, Soy Free Reduced Sodium, Apple Fennel, and Candied Coconut Bacon (Our favorites were the Apple Fennel and Candied). They’ll be available in May.

4.  Gardein’s New Fishless Filets– Before going vegetarian, seafood was never my thing, but since going vegan, seafood-inspired dishes are slowly becoming a favorite (I may or may not have a few recipes in my upcoming book). These fish fillets were completely unexpected and they were ridiculously good! We almost never buy gardein, but I would definitely buy these for a quick dinner. 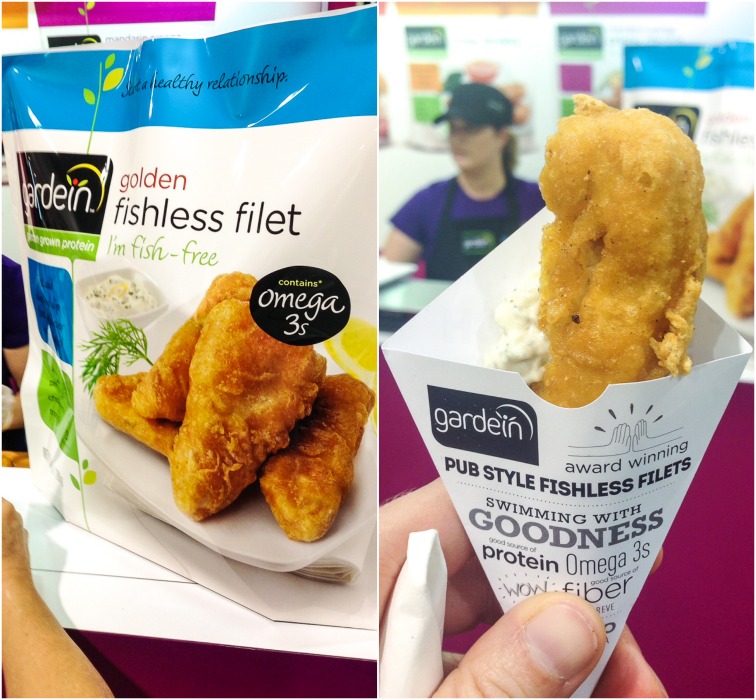 3.  Field Roast Burger– You all know that Chris swears like a sailor when he tastes things that he really likes, but when I bit into a sample of this burger, a flood of expletives poured from my mouth (okay, maybe just one or two). This is the best vegan, pre-made (store-bought) burger I’ve ever tasted. No competition. THE best. 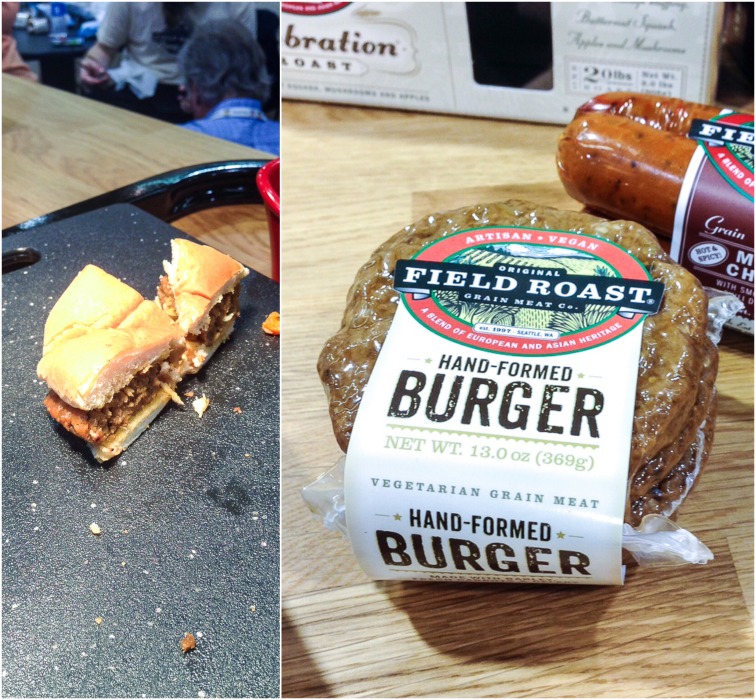 2.  Parmela Cream Cheese– I thought I’d found the best vegan cream cheese when I found Daiya’s new(ish) version but when I tasted Parmela’s new cultured cashew cream cheese, all bets were off. It’s so tangy and rich and creamy and doesn’t have a weird jello(ish) texture. I liked the plain flavor the best, but the kalamata olive and black pepper flavors were pretty awesome too. 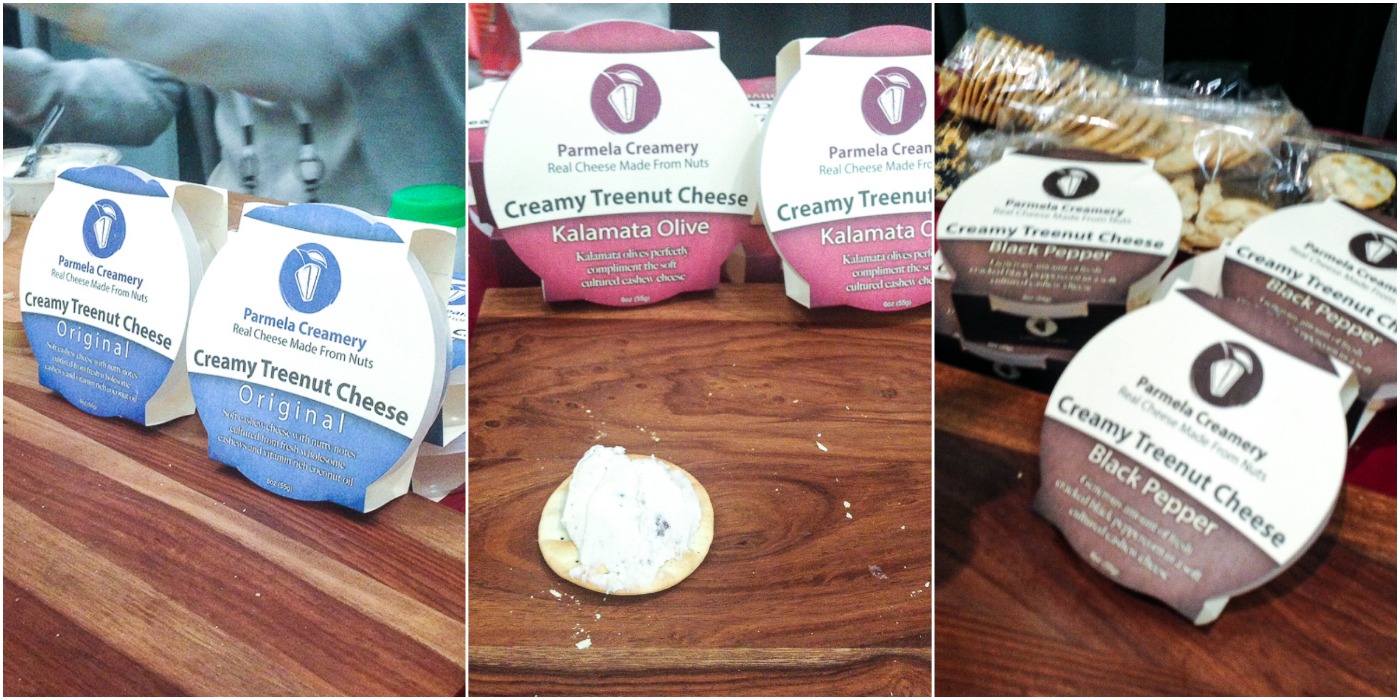 1.  The Piping Gourmets’ Whoopie Pies– Vegan and Gluten-Free and I ate a ridiculous amount of samples at their booth. And they gave Chris and I each a whole box of them. That’s 2 boxes with 4 each. I’m not even embarrassed to say that we ate all of them already. They are so amazing and by far the best thing we found at the Expo. Keep an eye out for these in your grocery store’s freezer dessert section. 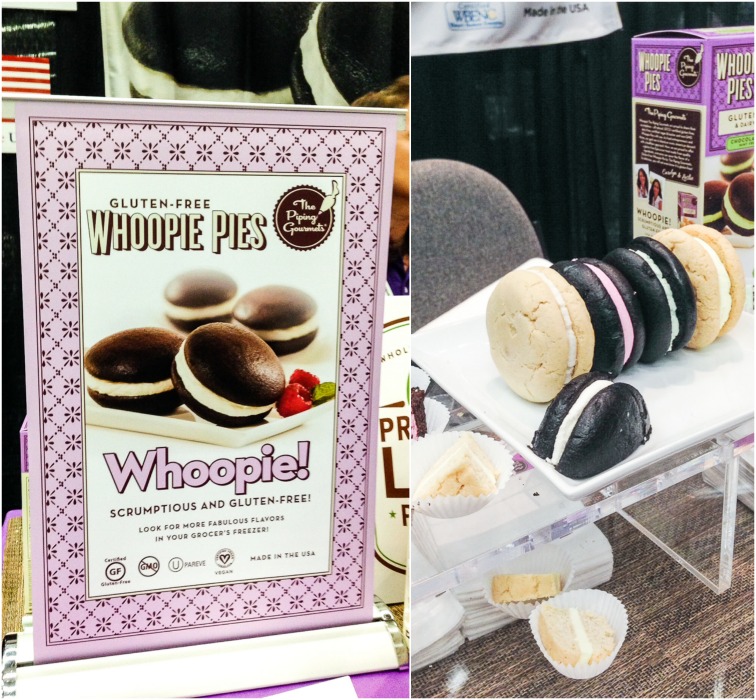 Have you discovered any awesome vegan products lately?