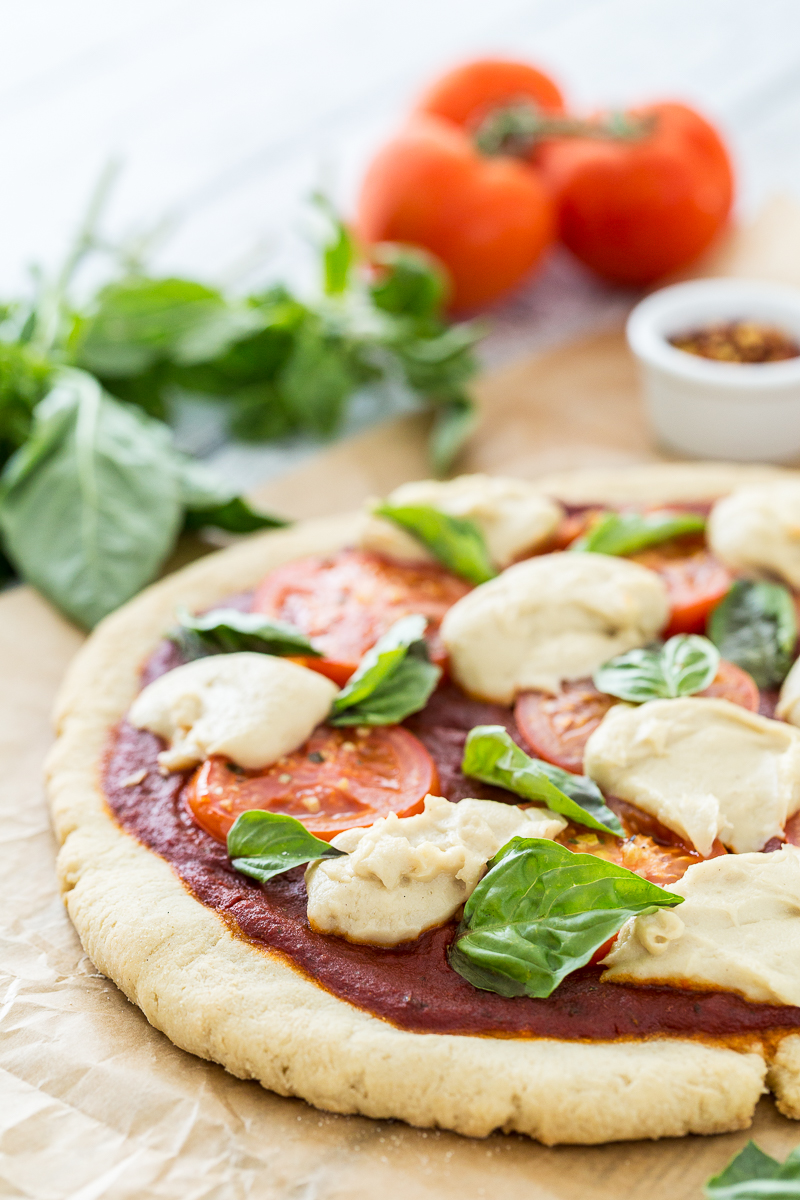 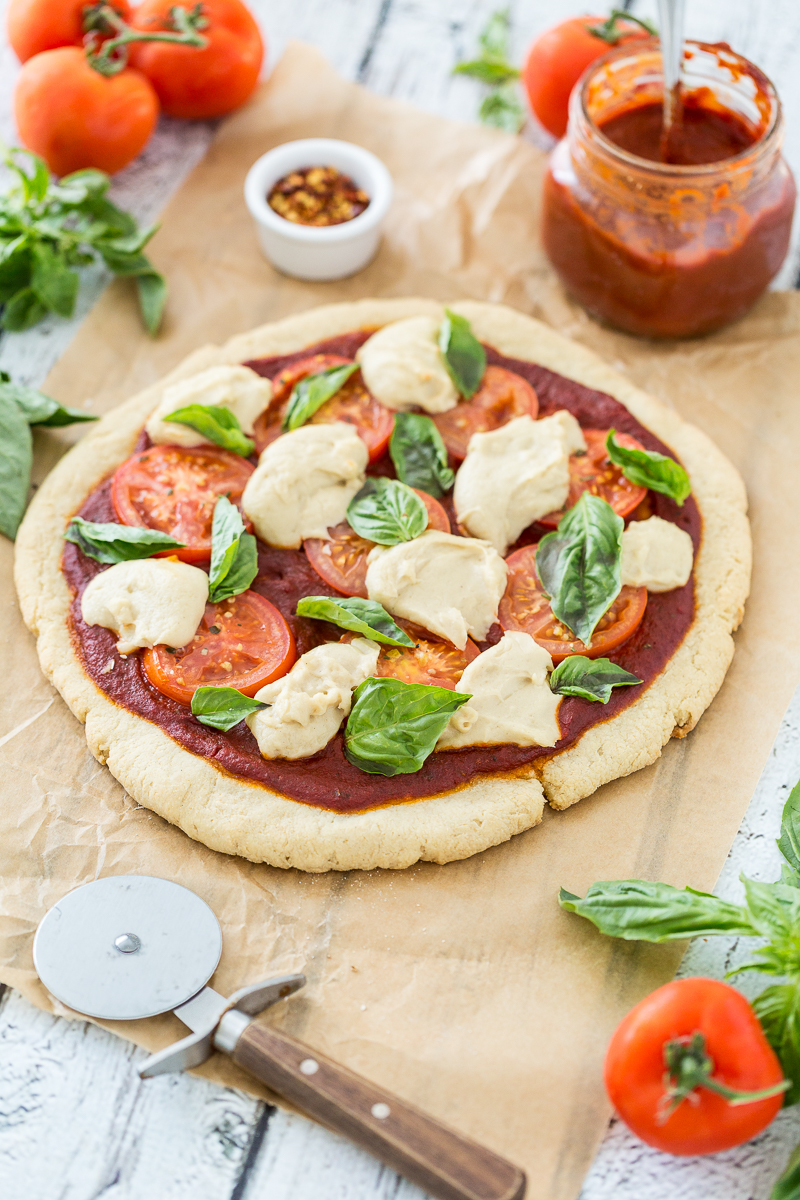 Since going gluten-free, my pizza stone has been awfully lonely (that's only partially true. I actually never take it out of my oven because a.) I always forget to put it in before preheating the oven, and b.) it's super heavy and I'm super lazy, so it's been hanging out in my oven. But it hasn't served any real purpose since the last pizza I made before going GF). I just didn't want to be depressed by one of those crispy, cracker-thin gluten-free pizza crusts that I see all over the internet. I'm going to drop a little truth bomb here: If it's crunchy and/or breaks in half when you fold it or bite into it, it's not a pizza crust. It's not that it's bad! By all means, it may taste great! But don't try to fool me into thinking it's the same as a chewy, doughy pizza crust. It's just like that one-ingredient, banana "ice cream." Sure, it looks like ice cream and it tastes alright, but you can't fool me! I know it's just a pureed frozen banana. It is not the same as regular ice cream (vegan, of course), guys! 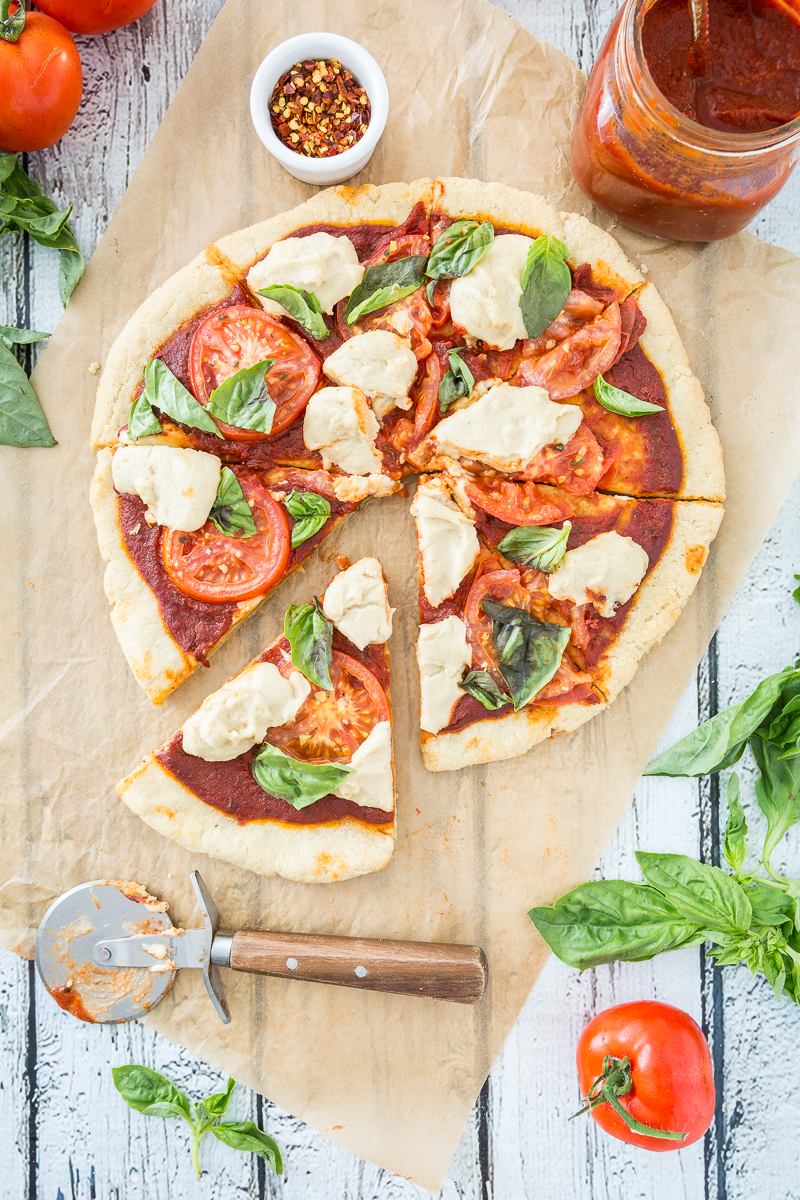 But I digress. I've been plenty sad about the lack of pillowy clouds of pizza crusts in my life since giving up gluten. Until I started recipe testing for my gluten-free flatbread. Once I bit into one of those beauties, I realized that with a little bit of yeast, a puffy, chewy gluten-free pizza crust could very well become a reality. 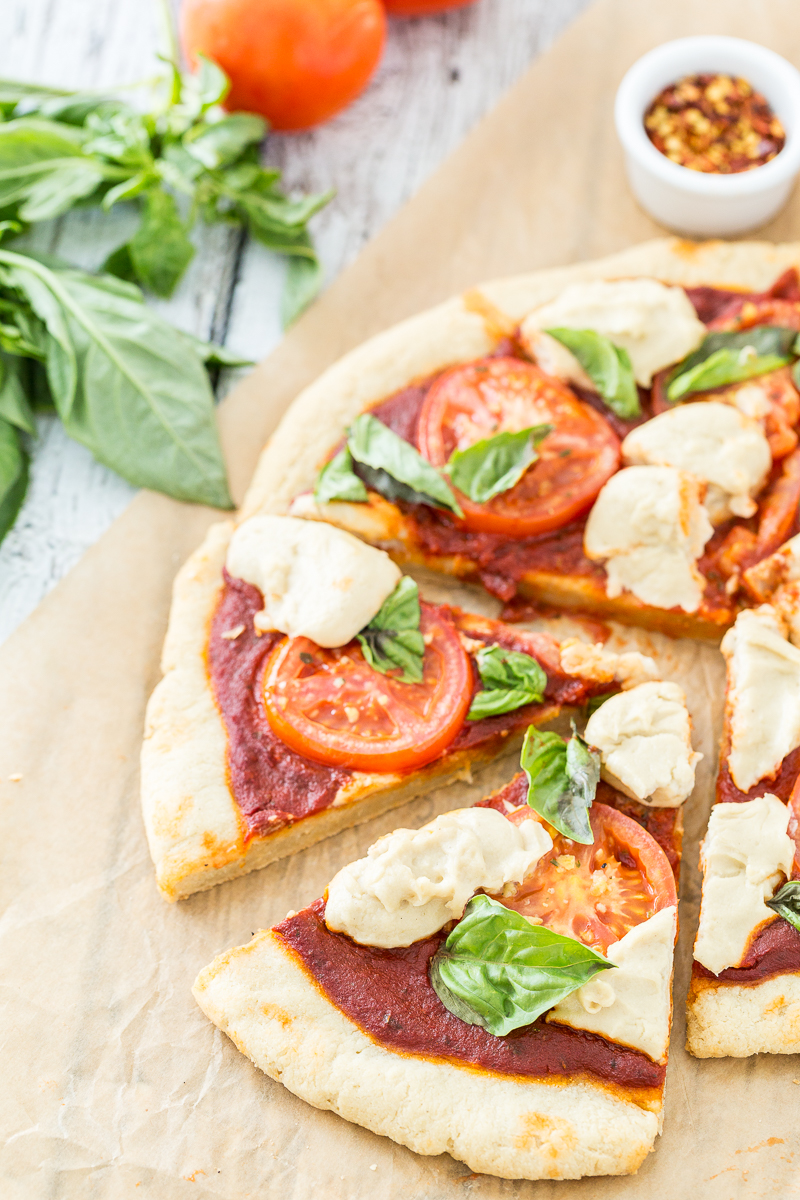 Just like the gluten-free flatbread, this pizza crust uses aquafaba to replace some of the water in a normal pizza dough recipe. This helps hold the crust together and make it completely the opposite of crumbly or cracker-like. There are also a couple other tricks to keep in mind:

1.  Be careful when adding the flour. Once you have your liquid mixture added to the bowl, add 1 cup of flour, then a 1/2 cup, and then 1/4 cup. Don't go overboard on this. You want your ball of dough to hold together without sticking to your fingers, but it should still be sticky/tacky to the touch. Where a non-gluten-free ball of dough would be dry-ish and smooth, this ball will still be a little wet. If you add too much flour, try adding water by the tablespoon to achieve the correct texture but you will still want to be careful. Too much flour will make the ball too heavy and it will not rise. 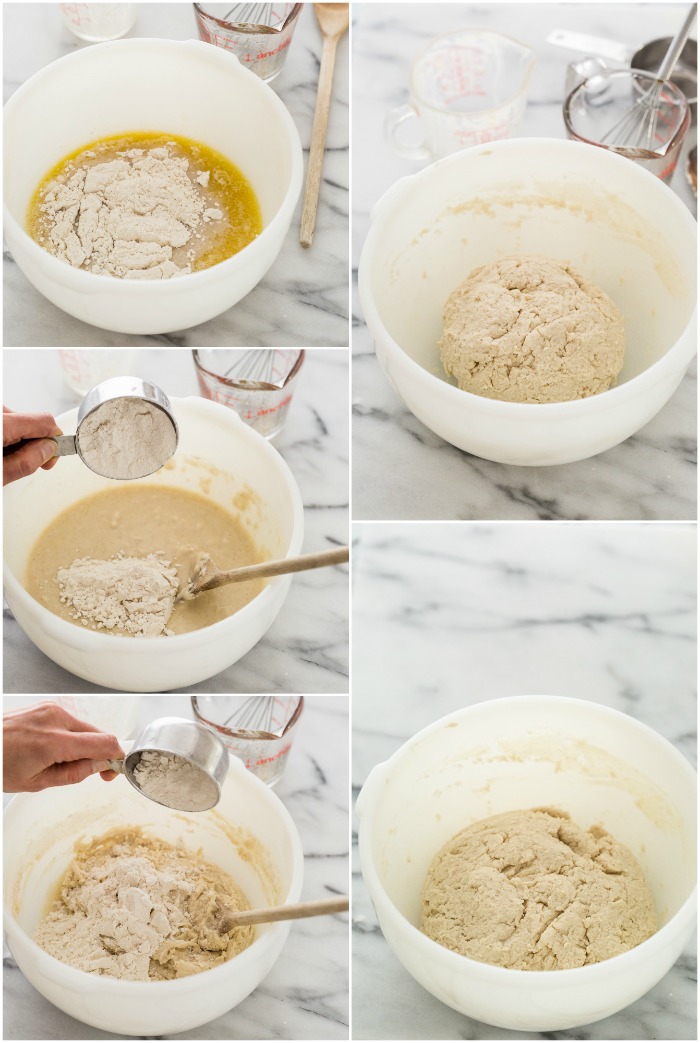 2.  After rising, you will need to knead the ball of dough and roll it around on a floured surface a bit. When you first start working with it, it will be delicate and will tear when you fold it over on itself. Once you work with it, kneading and rolling it, it will be come a tougher, softer, more pliable dough.

3.  Once you've made the dough pliable, you'll need to work fast (or it will be come delicate again). Pat the dough into a disk and then flip it, pat it some more, flip it again, and continue with the pat and flip routine until you have a roughly 10 to 11-inch pizza crust. It will be thicker than a normal pizza crust, prior to baking (normally you would roll the dough pretty thin), but that's okay. Quickly transfer the dough to the baking stone in your oven or a pizza pan/baking sheet and place in the oven. You will need to bake it, without toppings, for about 10 minutes to allow it to rise properly.

After baking the crust alone, letting it rise and and firm up a bit, you can remove it and add your toppings. Since I wanted a Margherita pizza, I just spread a quick and easy sauce (that I'd prepared while the dough was rising) on it, placed a few sliced tomatoes, and then dropped on dollops of my Macarella (straight from the pot, before letting it firm up) from But I Could Never Go Vegan!. I prepped the cheese while the dough was rising and then transferred it to the pot, along with the agar powder, and let my stepdaughter cook it while the crust was baking. Easy peasy. You could use any old vegan mozzarella cheese, though. I think Teese would work really well in this recipe, or you could even whip up a simple cashew cheese sauce and drizzle it over the top (that's what I did for my first trial of this recipe and it was perfect!). 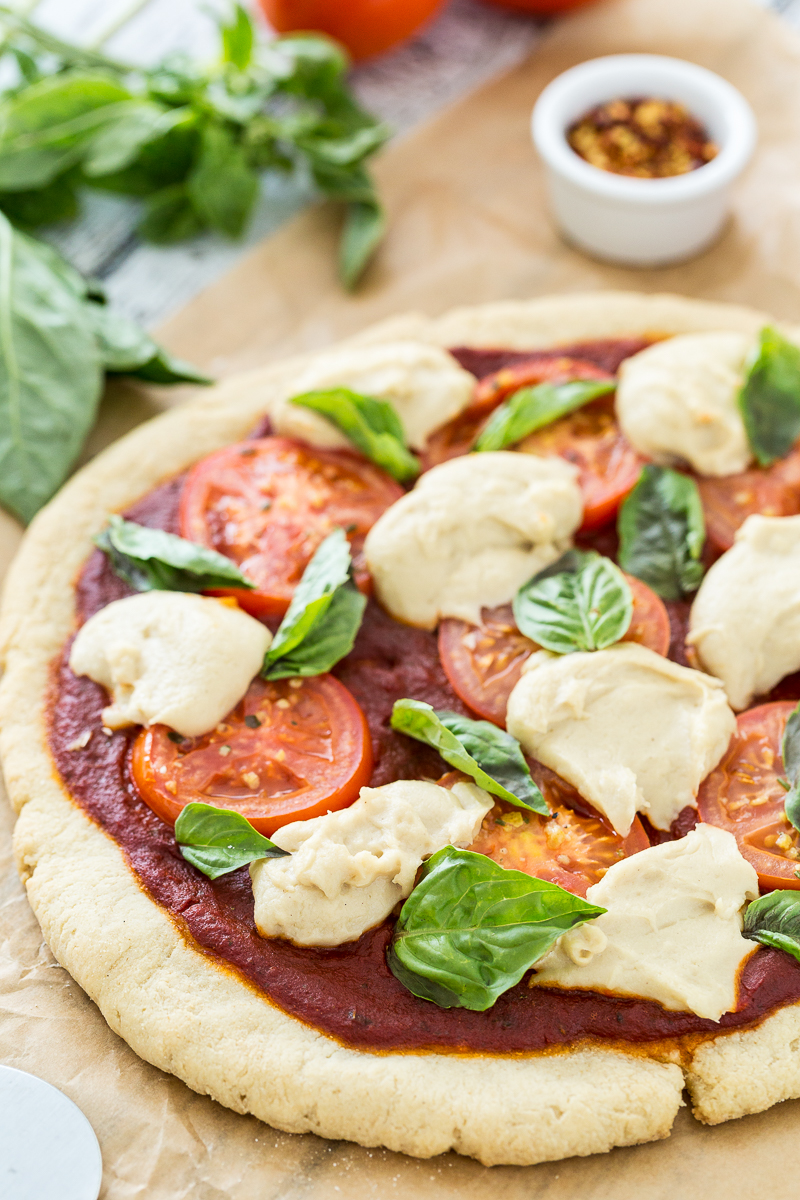 After letting it bake for about 7 more minutes, I removed it, threw on the basil leaves and went to town (and by "went to town," I mean I stuffed my face with this luscious pizza). I've actually made this pizza at least 4 times (it's a rough guess- my memory is fuzzy). There was the first time I made it, just to test it. Then I wanted to make it again to shoot it, and I added too much flour and it didn't rise. It was still good, but not as puffy. The third time, everything was going great and we shot all the prep pictures before realizing that I'd forgotten to buy fresh basil (I wish I could say forgetting a vital ingredient was a rare occurrence in my grocery shopping history, but that would be a huge, fat lie), so we just ate it, sans basil. Finally on the fourth go, all the stars aligned and the pizza turned out perfectly (and so did the pictures!). 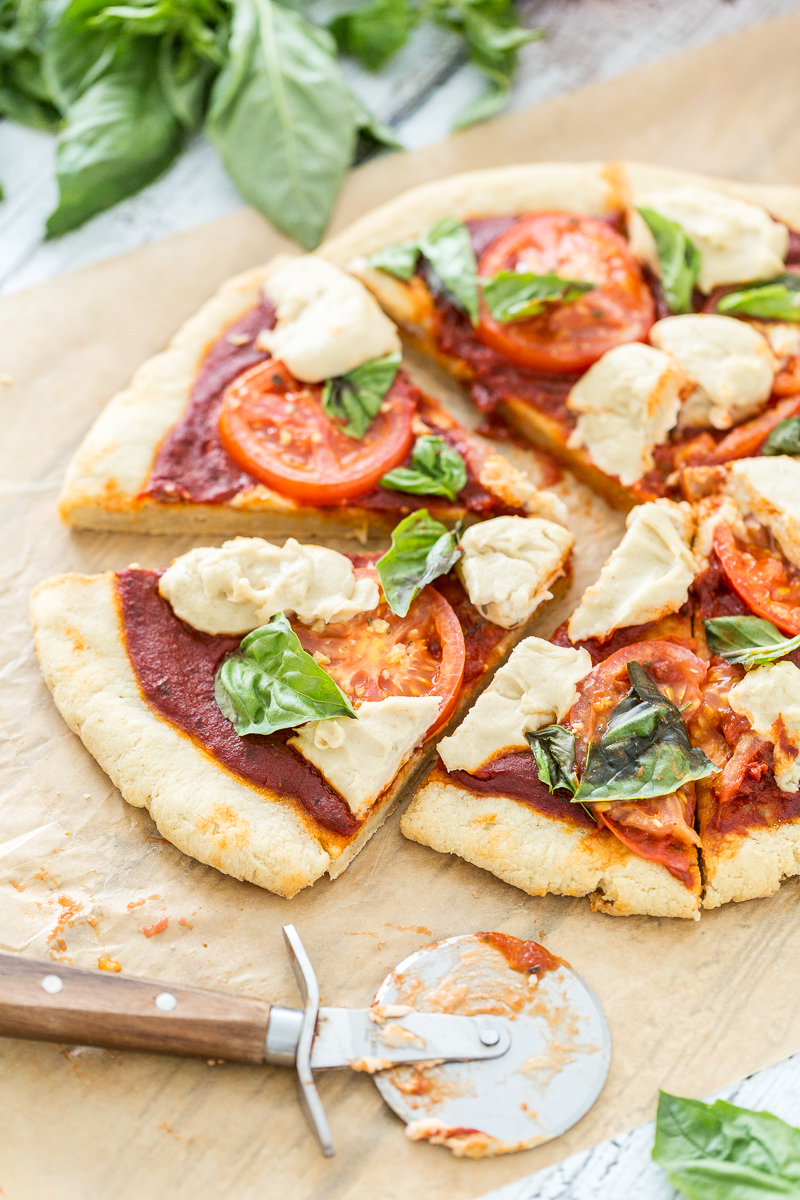 So, my gluten-free friends, you can now rejoice and reclaim the doughy, chewy, pillowy pizza crust of your past. For those of you who can eat all the gluten you want [fancy pants!], you can make this pizza using my regular pizza dough, though you may want to give this a try. My husband loved it so much, he ate all the crusts for the first time in the history of our marriage! 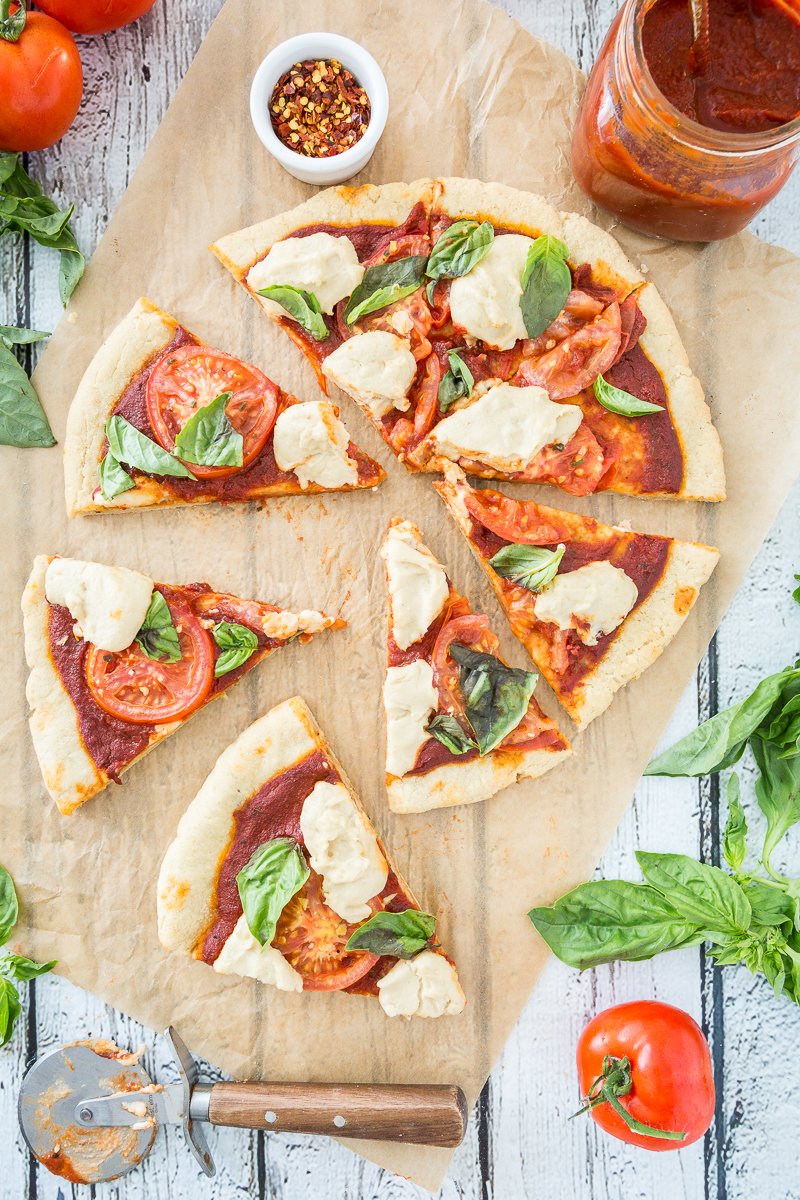 You may try another gluten-free flour blend, if you'd prefer, though I haven't tested it so I can't guarantee the results. 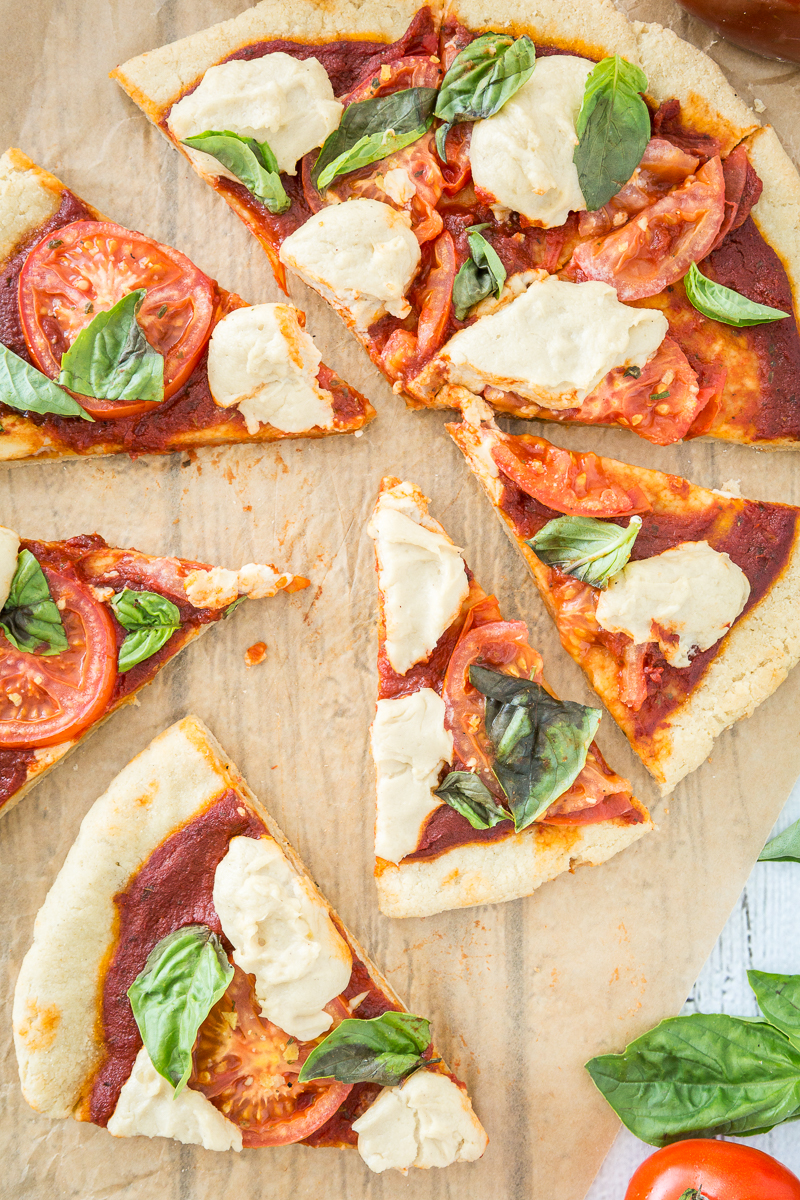 If you made this crust, what type of pizza would you make?